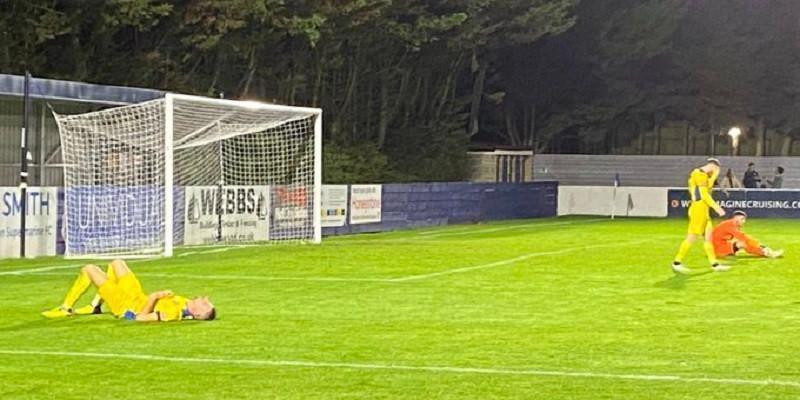 MARINE WIN PART ONE OF THE DORCHESTER DOUBLE

Following a weekend delay due to the sad passing of Her Majesty Queen Elizabeth II Swindon Supermarine were back in action on Wednesday night as they entertained the highflying Magpies of Dorchester Town for the first of two meetings in three days.

After a quiet start the game exploded into action on seven minutes. The ball dropped to hot shot HARRY WILLIAMS who cut inside a defender and with his left foot he blasted the ball firmly past visiting keeper Harry Lee for his eleventh goal of the campaign and 10 in the league. The perfect start for Marine but Dorchester responded strongly and began to dominate possession as Marine sat back on what they had.

But they soaked it up well with Sam Turl, Mat Liddiard and Leon Morrison restricting any clear-cut chances on Connor Johns’ goal. Marine broke well at times with Henry Spalding having a couple of efforts on goal, one was well saved low down by Dorchester keeper Harrison Lee on twenty-six minutes. Connor Johns was called into action on the half hour with an excellent punch away from a corner and taking a whack in the process, but he was okay to continue after some treatment.

However, the pressure told on thirty-eight minutes after a lovely through ball found SHAQUILLE GWENGWE who slid home under the body of Johns for the leveller. The response was instant from Marine as Harry Williams spotted the Dorchester keeper off his line and his lob beat the back-pedalling keeper but came back off the bar and into the keeper’s hands to deny the free scoring striker. A late Leon Morrison header was well saved from a corner as the two sides went into the interval finely matched.

Town made their first alteration minutes into the second period with captain Callum Buckley forced off to be replaced by Tiago Sa. The switch seemed to work as seconds later Charlie Gunson cut in from the right-hand side and smacked a low shot past Johns to give the visitors the lead. This was however a turning point of the game. Lewis Hall picked up a knock from a hefty challenge and was replaced by Tyronne Duffus with Sam Turl switching to left back. The change worked very well with Harry Williams poking a shot at Harrison Lee soon after. Then James Harding beat his man in the box with some trickery only to be chopped down for a clear spot kick.

Harding stepped up himself to look to net his first goal since the opening home game of the season but was denied when he struck the ball too close to Lee who comfortably saved the spot kick. Moyse was replaced by Griggs for the visitors and Brad Hooper replaced the hard-working George Dowling on sixty-four minutes and the extra energy enthused the hosts. With twenty-two minutes left Zack Kotwica cut inside to fire away a fierce shot which Lee could only parry and poaching with a brave header was JAMES HARDING to fully make up for his penalty miss, and he wasn’t finished there. Just five minutes later HARDING found some space on the left side of the box and bent a delightful strike into the top corner to give this second half display the score line it deserved for Marine. Delicious football and five goals for the season for the striker.

Sadly, Harding’s night finished early after receiving a knock and was replaced on seventy-nine minutes by Conor McDonagh. McDonagh almost got Harry Williams in for a second and sealing goal, but he hit over the bar from close range. With the clock ticking away in injury time, Lee who had gone forward for a corner was found way out of the goal and from Williams’ quick-thinking, he lobbed the keeper, but the ball rolled just wide of the goal, but the agony was short lived as the referee blew his whistle seconds later for full time. A valuable three points for Marine who moved into fourth place in the table.

A brilliant five-star game of football with two sides playing football as it should be played, a terrific advert for the Southern League Premier Division, enhanced by a very competent and unfussy performance from the excellent trio of officials. So good I couldn’t even tell you what they looked like!

We go again on Saturday in PART TWO of the Dorchester Double! FA CUP action at the Webbswood Stadium. – ! Fans Player of the match: James Harding for a two-goal salvo and a penalty miss redemption