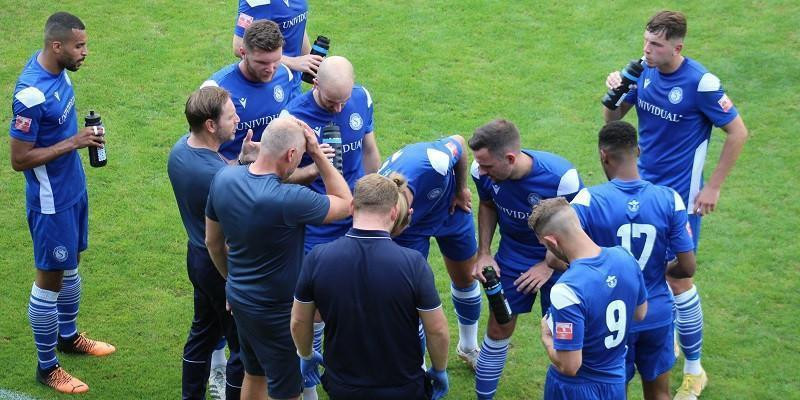 Swindon Supermarine travelled to Salisbury in the first of a double header weekend hoping to keep their fine start to the season going. Manager Lee Spalding made two changes to the side that beat the Met Police the week before with Jamie Edge and James Harding replacing Tom Sharpe and Conor McDonagh who dropped to the bench where Sal Abubakar replaced Rudy Plummer for the game. 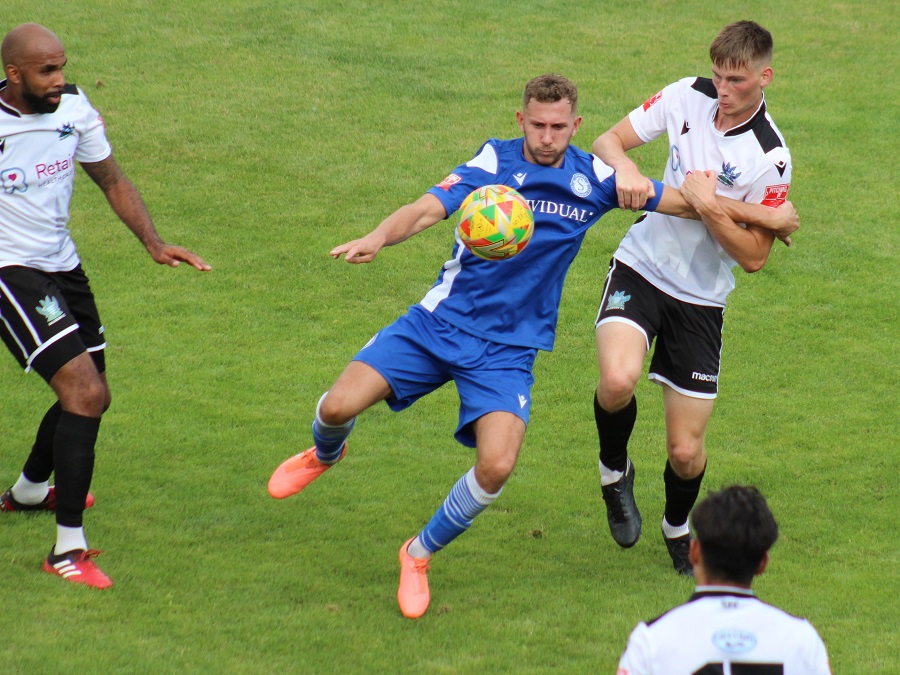 Marine in an all blue strip put the hosts under pressure early doors, Salisbury keeper Albie White struggled from an early cross from Henry Spalding but recovered to gather the ball. Harry Williams forced an early save from White when clear through but at a difficult angle on four minutes. Salisbury then came close as Ben Thompson poked one high and wide soon after before Marine got on top again. Mat-Liddiard heading wide from a corner and then Harry Williams won a header in the box and nodded it down to James Harding in front of the goal but missed a great opportunity for a tap in when he miss controlled the ball as it hit his shin and bounced wide of the goal. After prolonged Supermarine pressure it was a case of just when the breakthrough was going to come and then it did. but at the other end! 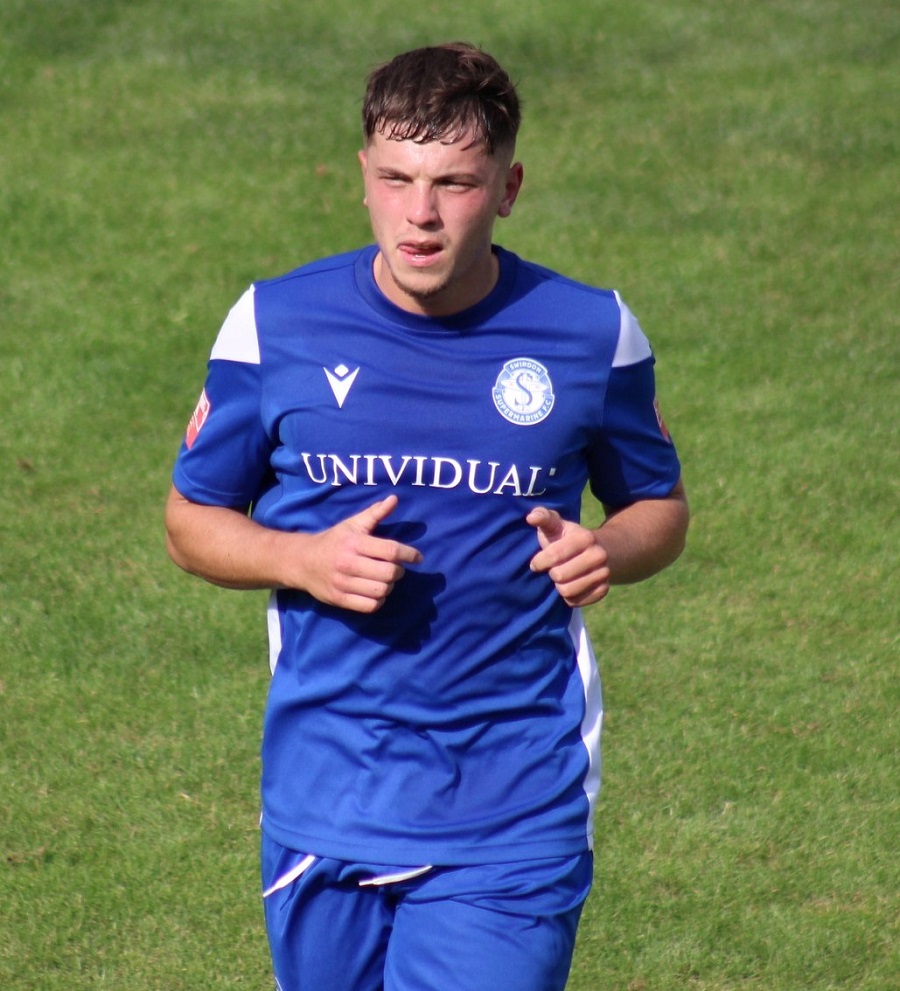 Salisbury resorting to long ball clearances under the pressure hit the ball upfield, after flicking of the heads of Jamie Edge and Mat-Liddiard Ben Thompson won another header with Lewis Hall challenging. The ball fell kindly to the lively Antonio Diaz who rolled the ball into the box and with Ben Thompson and Mat-Liddiard challenging for the ball. Thompson then clearly pushed Mat-Liddiard in the back and at the same time flicked the back of Liddiard’s heal as they both fell to the ground. It looked an easy decision for the referee and the linesman seemed to agree by flagging for a Marine free kick. To everyone’s surprise the referee pointed to the penalty spot. Despite a number protests and a discussion with the assistant the referee gave and give the third penalty against Marine in just five games already this season. 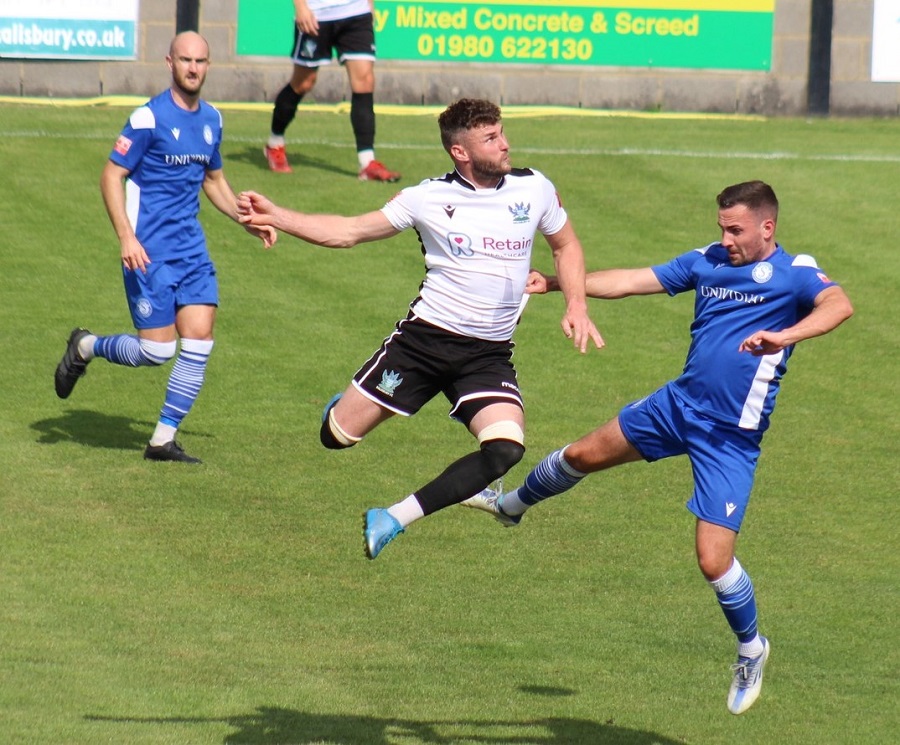 BRANDON GOODSHIP stepped up to slam it home in the right of the goal for a 1-0 scoreline and what was a kick in the teeth for the players. Jamie Edge went into the book for dissent as well. Salisbury’s Josh Wakefield was booked for a foul just before the water break but the rest of the half was stop start with nearly every challenge being blown as a free kick, which took all the momentum out of the match for the remainder of the half. Before the break James Harding joined Edge in the referee’s book for a debatable foul and a booking looked quite harsh. Lewis Hall did well in the final minutes of the half as Salisbury put together a rare attack of note by clearing away from the goal line as two Salisbury players waited for the cross in front of Connor Johns and the Marine goal. 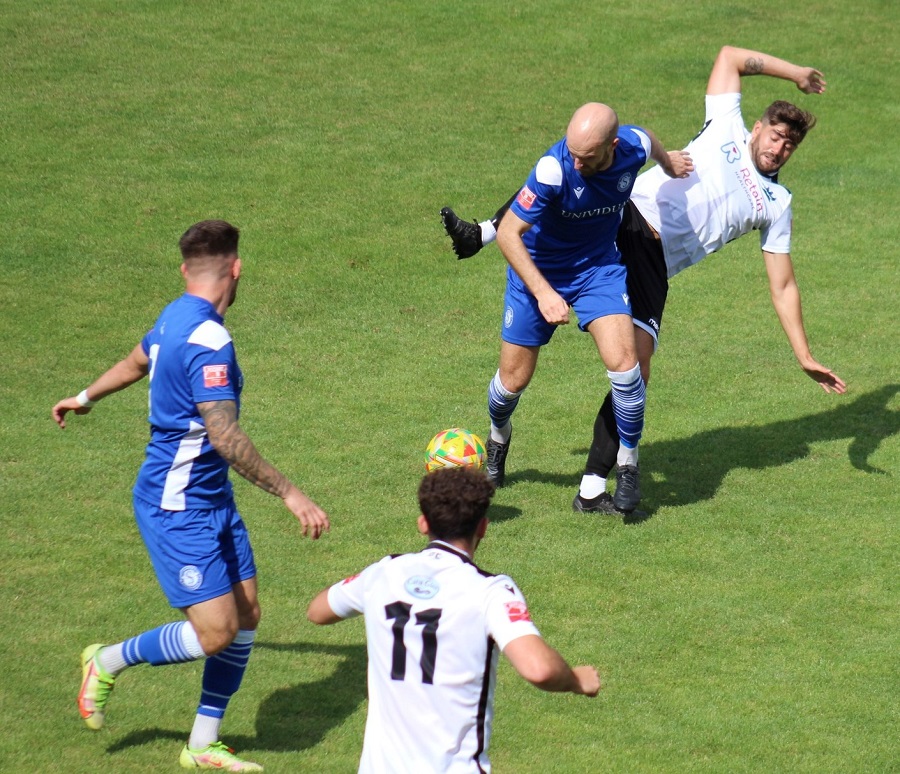 A disappointing outcome to the half but with quality on the bench the visitors would have been hopeful of a turnaround as Salisbury had been nothing to worry them unduly in the first half. Salisbury manager Steve Claridge was clearly not a happy man with the first half showing as the Whites made a double half time change, with Daniel Fitchett and Dinesh Gillela on for Ben Thomson and Josh Wakefield. Indeed it was another strong opening for Marine, Brad Hooper broke through a static Salisbury midfield and as he drew two defender to him he played the ball behind the two defenders and into the run of Harry Williams and with just the home keeper to beat. But with the pass a little to heavy, it sent Williams slightly wider than he wanted and he could only pull his shot just wide of the post. A minute later and a loss of possession to Antonio Diaz by Lewis Hall when advanced up the pitch caught Marine short on numbers in defence, and after a couple of neat interchanges the ball was laid back to ANTONIO DIAZ who found the top of the net from inside the box to capitalise on a Marine mistake. 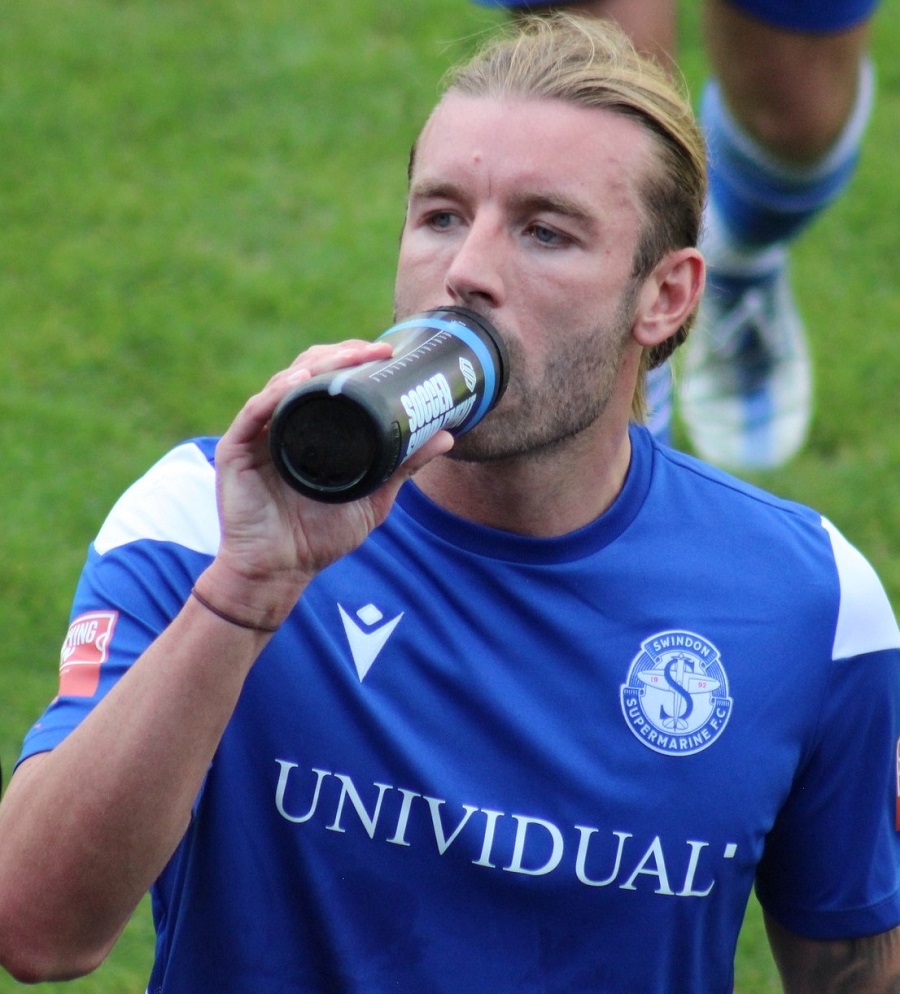 Lee Spalding responded by making a double change on the hour, with Conor McDonagh and Sal Abubakar, who was making his competitive debut for Marine, replaced James Harding and Zack Kotwica. Salisbury came close when Ethan Sutcliffe just failed to connect as headed a corner wide on sixty-five minutes and Connor Johns, who had a decent game, got down well to deny a third goal from a Goodship shot. Sal Abubakar was looking lively after coming on but when a quick chance came his way with twenty minutes to go he couldn’t get over the ball and what could have been a tap in at the back post flew high over the goal from close in. 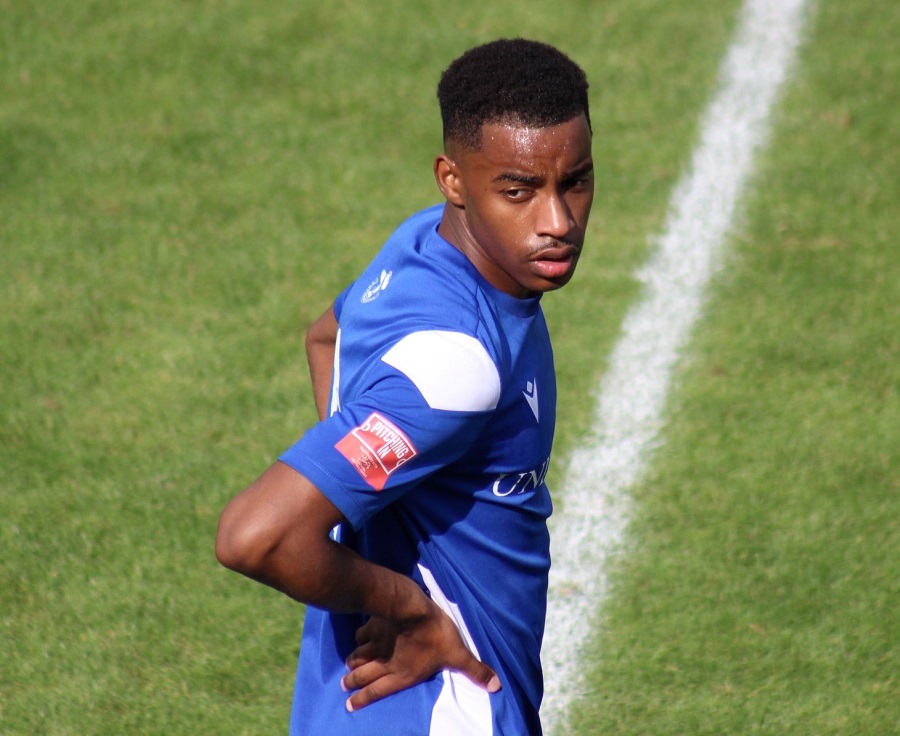 Shortly afterwards George Dowling replaced Brad Hooper for the final change before more some good wing play by Abubakar set up Henry Spalding who from a similar to the Abubakar chance minutes earlier but at the other side of the goal, also lashed the ball high and wide when well placed. During the time Conor McDonagh was on the pitch he caused the Salisbury defenders a lot of trouble for the home defence and had an effort blocked by a melee of defenders who threw themselves at the goal bound strike. Abubakar went into the referee book minutes after a lecture from him about another foul. 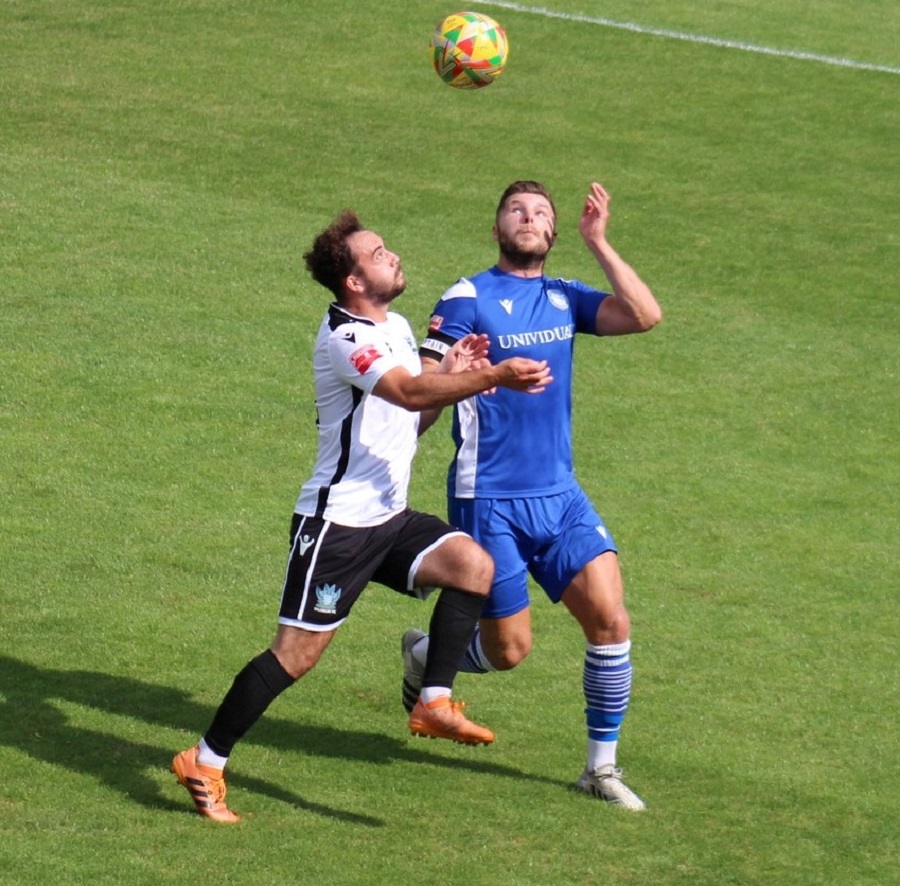 With ninety minutes on the clock Jamie Edge had a great chance to score when after a corner the ball bounced around in the box before falling to him in front of goal but he could only fire his effort straight at White in the home goal. With the three additional minutes almost up, Edge was first to a goal kick from Salisbury keeper White and moved the ball quickly through the Salisbury defence. HARRY WILLIAMS made a timely run off the should of Salisbury’s central defender Sam Roberts and in a couple of strides saw White off his line and superbly lobbed the keeper from 30-yards for what was a consolation goal and his seventh goal of a very productive season so far. 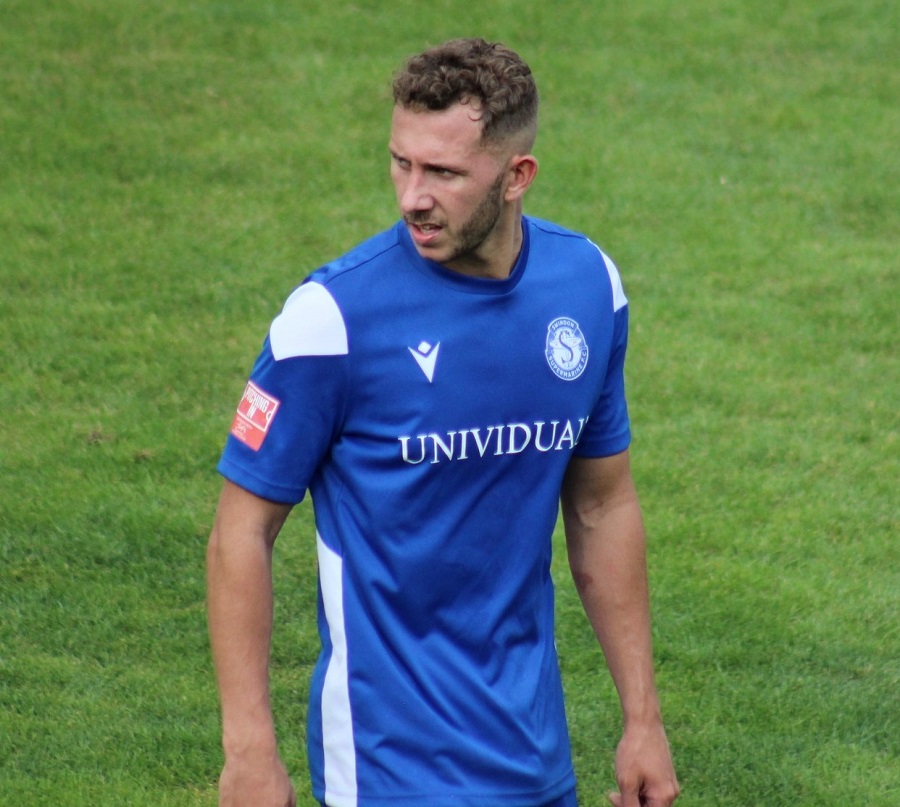 Sadly there was barely time for a restart, a difficult scoreline to swallow, especially against local opposition but Marine will feel they should have taken at least a point and might have done so on another day. A quick chance to put things right on Bank Holiday Monday however when we entertain Merthyr Town at home. Please get along to support the lads as we look for our fourth win of the season to remain in the top six.