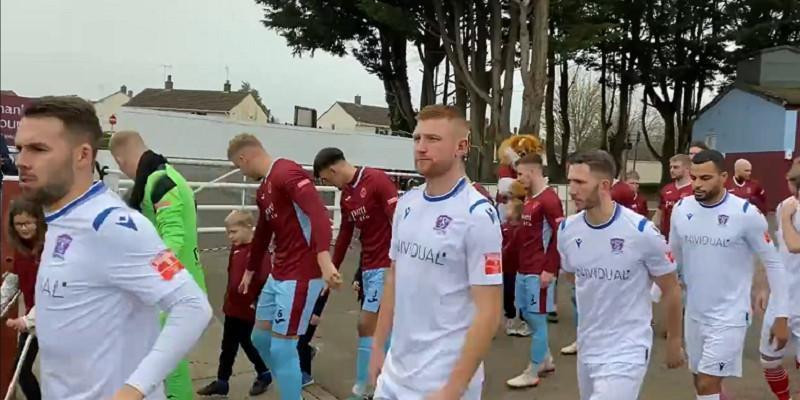 MARINE CONTINUE TO PAY THE PENALTY

Marine were back on the road on Saturday afternoon as they took the trip down to Somerset to take on in form Taunton Town at the Cygnet Stadium. Manager Lee Spalding made just the one change as new signing from Larkhall Matt Britton came in to replace Tom Sharpe who was still feeling the effects of a dislocated finger from Tuesday and dropped down to the bench. Jamie Edge returned to the bench after a two match suspension.

Marine playing in white shirts made a strong start with Ryan Campbell in particular looking dangerous down the left with a couple of good crosses into the box. The hosts were looking more than a little nervy despite not having lost since November with nine wins on the trot coming into the match. The early pressure brought numerous corners for the visitors and on seven minutes it looked like one of these had given Marine the lead. Henry Spalding’s in swinging corner caught the wind and home keeper Matt Buse appeared to drop the ball over the line but it wasn’t spotted by the linesman and no goal was awarded.

On twenty-six minutes a lovely Marine move saw Conor McDonagh’s superb back heel on the edge of the box play in top scorer Harry Williams but he stabbed his shot wide of the goal. Taunton were already getting a little desperate in their play going down theatrically in the box but the referee wasn’t buying it on this occasion but final on the half hour they mustered their first strike on goal from Joe Budd which was expertly turned aside by an alert Martin Horsell. Conor McDonagh hit a shot from the edge of the box that didn’t really trouble keeper Buse and soon afterwards Marine went into the half time break more than satisfied with their display having produced one of their brightest displays of the season against one of the best in the division.

Taunton rang the chances with a half time sub and it almost brought instant reward as the man coming on, Jared Lewington got on the end of an early cross which Martin Horsell had to tip over. From the corner Marine initially cleared before Tyrone Duffus was blatantly pushed to stop him clearing the ball, which was somehow missed by the referee, before the Taunton player looped the ball back into the danger area. From then on a goalmouth scramble ended with the ball hitting Harry Williams on the goal line. The referee deemed it deliberate handball and not only was a penalty given but Williams received a red card.

Even from video footage it is impossible to say where the ball hit Williams and despite having his hands raised in self defence from a point blank strike it looked closer to chest / armpit area than the actual arm. In all fairness a tough decision for the referee to make but encouraged by a large contingent behind the goal baying for a penalty and a group of surrounding Taunton players the spot kick was awarded. Sadly the rules do not allow for the fact that a handball on the line if given could in fact be accidental or self defence and the official had no option but to give a red card – in these circumstances a really harsh punishment both for the team and the player. It was the ninth penalty conceded by the Marine side in total this season and the sixth away from home in nineteen games.

Taunton striker ROSS STEARN stepped up to score, sending Martin Horsell the wrong way and to change the face of the game. Despite this once the game settled down again Marine continued to look the better side with the ball despite the man disadvantage. Lewis Hall was booked on the hour after a late challenge and soon after from a good break Tom Mehew’s deflected effort was easily collected in the home goal by Matt Buse. The hosts put a rare good move together on sixty-seven minutes which ended with Zac Smith blasting the ball high over the top of the goal with just Martin Horsell to beat. Marine decided to bolster the middle of the park and George Dowling replaced Henry Spalding on sixty-eight minutes and then with fourteen minutes left Kieran Philips entered in place of the excellent Ryan Campbell.

Marine switched off slightly soon after down the right hand side and left back JAY FOULSTON took full advantage he went past two Marine players before driving a fierce left footed effort into the top corner to give Horsell no chance and effectively sealing the win for Taunton, their tenth in a row. There was still time for Marine to impress with Conor McDonagh curling a great effort just over the bar and they also had a couple of penalty appeals of their own. First Kieran Philips 76’ appeared to be hauled over during injury time by Jacob Wannell but the referee saw nothing wrong and then the ball struck a defender on the arm from a cross by Lewis Hall but once again appeals were waved away to complete a frustrating afternoon.

However when the final whistle blew Marine will reflect on what was a really strong performance against the most in form side in the division, a side pushing for promotion both on and off the pitch, which saw a large attendance off 660 on the day. The visitors will be particularly encouraged by the superb full debut of Matt Britton who picked up the fans player of the match award and with Conor McDonagh and Ryan Campbell causing the Peacocks defence issues all afternoon. Marine will go into Tuesday’s League Cup Semi Final against the same opponents with a lot of confidence and belief that they can produce a result on the night and make it to their first ever Southern League Challenge Cup final.