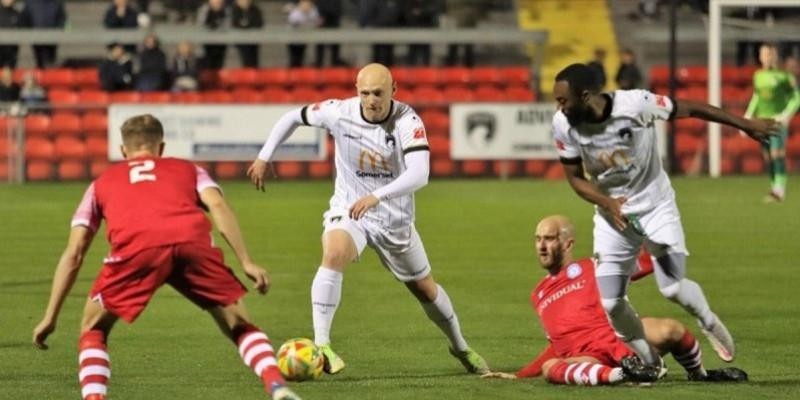 TOUGH ASSISGMENT AT THE SEASIDE

Swindon Supermarine were on the road Tuesday night as they took on the high-flying Seagulls with a trip to Weston-Super-Mare. After the weekend draw with Beaconsfield manager Lee Spalding opted for a double change with Tom Sharpe coming in for Brad Hooper and Ryan Campbell on the wing for Zack Kotwica, both returning after injury and despite being forced off at the weekend Tyrone Duffus was fit to continue at right back.

After the usual early exchanges with the two sides jostling for control, it was Marine who kick started the game into action on nine minutes. A clever through ball found JAMES HARDING in behind the defence who expertly went round home keeper Max Harris to net from a very acute angle and put Marine into the lead for his tally of six goals in eight starts. Marine continued their good start with Ryan Campbell causing them trouble on the wing and his excellent cross was almost met by top scorer Harry Williams, but he could only steer the header into the air instead of at the goal.

The home frustration was clear as Jagger Cane went into the book for an over-the-top tackle on Tom Sharpe which on another day might easily have seen red. Harding had another effort soon after straight at the keeper. Weston came back got better the last 15 minutes of the half, probing and passing their way forward, but the Marine defence were holding on stoutly although Sam Turl saw yellow on thirty-four minutes for a foul on the lively Jay Murray.

Connor Johns was marshalling his defence well and from a series of set pieces produced both a timely punch from a cross and some safe handling from a Reuben Reid effort. But with time ticking away on the half a mistimed pass by Tom Sharpe gave away possession in a dangerous area and like top of the table teams do they punish you! Scott Laird fed in Reid on the corner of the box, and he drilled home to give Connor Johns little chance. There was still time for Jordan Bastin to go in the book for Weston after a foul and a vicious drive from Laird was pushed away by Johns to keep it 1-1 at the break.

The hosts were buoyed from their late breakthrough and came out flying for the second period. After four minutes of barely touching the ball Marine found themselves 2-1 down. A long ball from the home keeper Max Harris was neatly taken down by Reid on the left who in turn expertly fed in DAYLE GRUBB on the left of the goal and he buried the ball into the bottom corner. In the space of five minutes the game had turned on its head. Tom Sharpe then went into the book for a challenge which saw Scott Laird leave the field of play to be replaced by Will Tunnicliff.

James Harding had a long-range effort that went a long way over the bar on fifty-five minutes and on the hour Jamie Edge into the book and Brad Hooper replaced Tom Sharpe who appeared to be labouring after that challenge in the first period. The hosts had the ball in the net with twenty minutes to go but it was well offside, and the next action saw Conor McDonagh enter the fray for the below par Harry Williams who had been closely marked all game.

With fifteen minutes left on the clock Weston ventured forward through centre back Humphries who found some space and punted a powerful effort at goal. Marine keeper Johns did superbly to get a glove on to the shot, but it rebounded straight out too MARLON JACKSON who drilled home the ball to seal the three points. Marine’s Sal Abubakar then replaced the hard-working Ryan Campbell with ten minutes to go and with frustration at the night’s events both James Harding and Tyrone Duffus saw yellow, making it five yellows on the night and nine in total despite it not being a particularly feisty game.

The four added minutes saw more action with Johns saving well from Jackson before Marine went up the other end to force a set piece. Harris did brilliantly to deny a second for Marine with a save from a Mat Liddiard’s header after a Tyrone Duffus headed assist and the final action saw fittingly Johns with a double save to deny an unjust fourth for the hosts.

A tough game and another day Marine might well have seen them coming away with something here. No disgrace against top of the table opponents who recognised it had been a difficult evening to get the job done. Marine still sit in a playoff spot, albeit from the narrowest of margins, after what has been an excellent opening to the 2022/23 campaign. It’s a break from league action for a couple of weeks now with visits to the Webbswood Stadium by Farnborough in the FA Cup on Saturday and then Cirencester Town in the FA Trophy the weekend after.

Fans Player of the match: Conor Johns Getting better each match as he readjusts to this level.