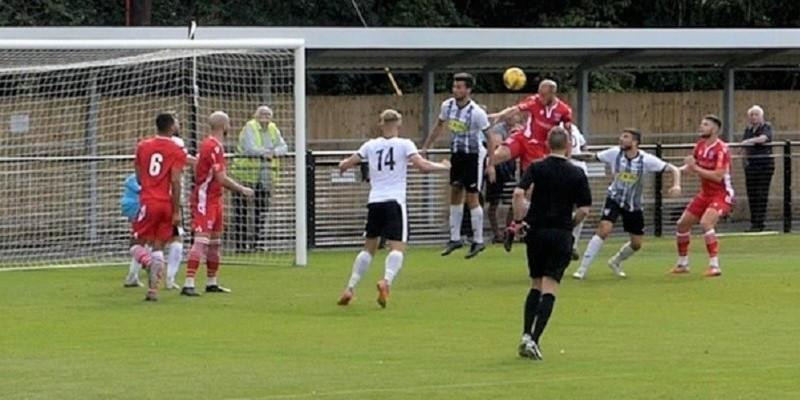 MARINE PUSH FOR THE TOP

Swindon Supermarine made it two wins in a row and picked up their first three points on the road by beating Wimborne Town away on Saturday at the New Cuthbury stadium. Manager Lee Spalding made just the one change from the previous win by opting to bring in Louis Spalding after injury at right back with Pierce Mitchell dropping to the bench. Frankie Artus returned after his injury to the bench. 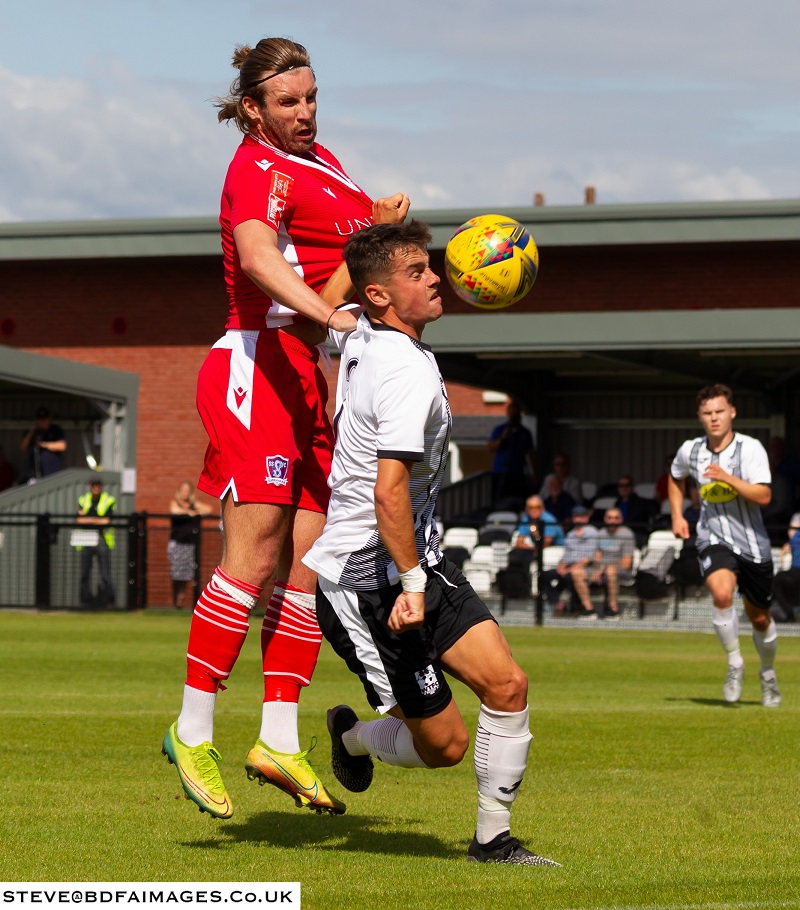 The Wimborne defender gets away with a blatant shirt pull on Conor McDonagh
Photo © www.bdfaimages.co.uk Match Album

Marine in their eye catching red strip hit the ground running looking the stronger side from the off. Brad Hooper hit the first effort at goal but slashed the ball wide before the first attack from the hosts came on the quarter hour with a shot just over the top. Marine continued to pressure the home goal but without creating much although some desperate defending saw both David Pratt and Conor McDonagh have their shirts tugged in the box but this went unpunished. 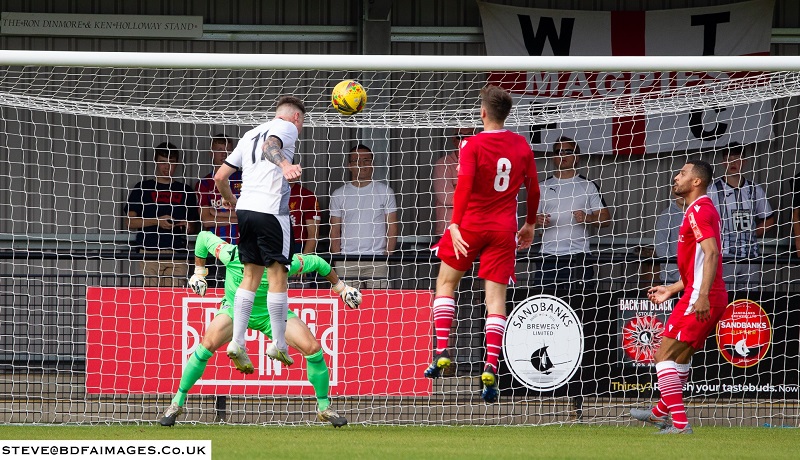 And then out of the blue just before the half hour the first goal chance came and although it went against the run of play it was as an excellent interchanging of passes down the right by Wimborne full back Daniel Strugnell and striker Jake Sinclair before the latter sent over a cross to the unmarked LEWIS BEALE who superbly headed home with Martin Horsell at full stretch divining to his left, and he could only help the ball into the bottom corner. No one had seen that one coming! 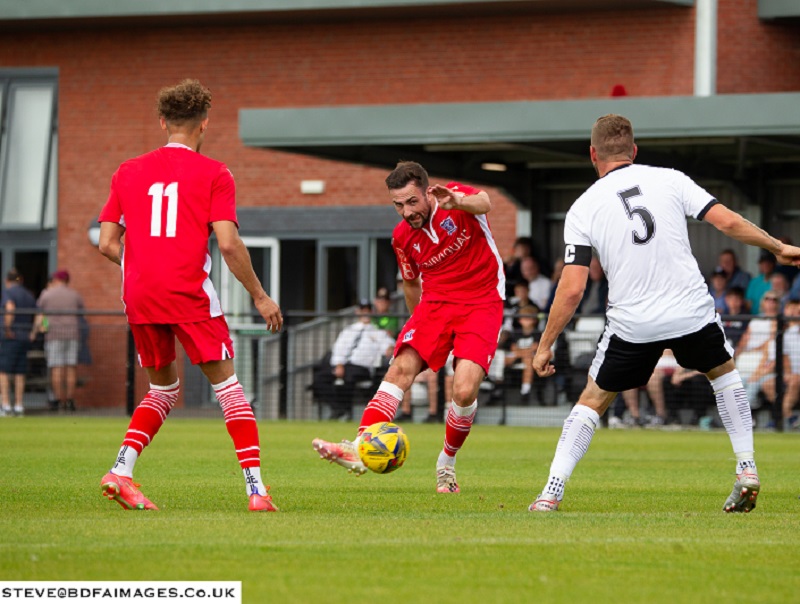 But Marine responded positively upping their attacking play. Conor McDonagh’s header hit the arm of a defender but once again the official decided no penalty. Lewis Hall hit a right footed effort but that was easily saved by home keeper Billy Terrell. Henry Spalding’s then got on the end of an excellent move with a fierce curling effort which rocketed just over the top. McDonagh then sent a shot just wide coming up to half time and the desperation in the home ranks saw Jake Sinclair booked for a late challenge on Brad Hooper. 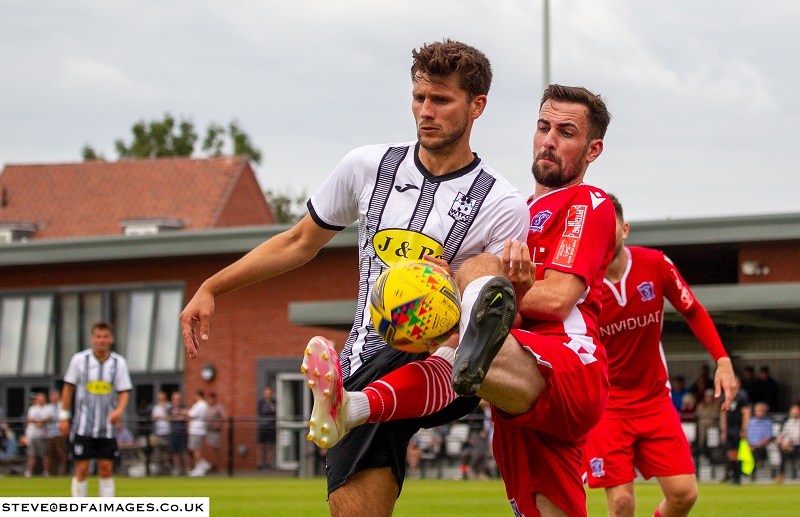 It wasn’t a shock when the Marine pressure finally told two minutes into injury time before the break. Henry Spalding’s corner was met by defender Tyrone Duffus whose header was blocked with the ball going back out to Henry Spalding’s whose pinpoint cross was firmly headed home by DAVID PRATT at the far post and finally breaking his duck for the season after two harshly disallowed goals in previous matches. The sides went in level at half time - the least Marine deserved. 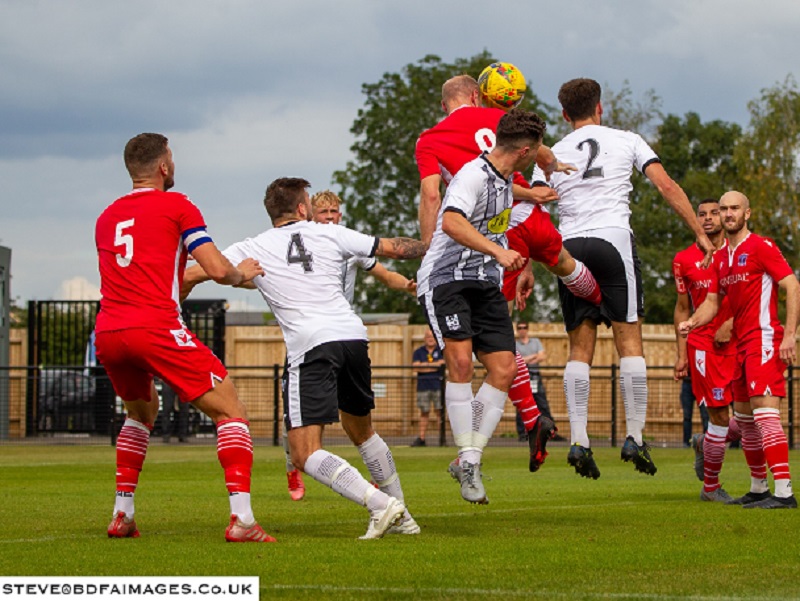 An early yellow card for Wimborne after a challenge on Henry Spalding’s by Connal Morrison and an early change as Louis Spalding’s made way on 50 minutes after feeling the effects of a first start in a month was replaced by Pierce Mitchell. Soon after skipper Mat Liddiard headed a corner just wide of the upright as Marine maintained some early second half pressure. 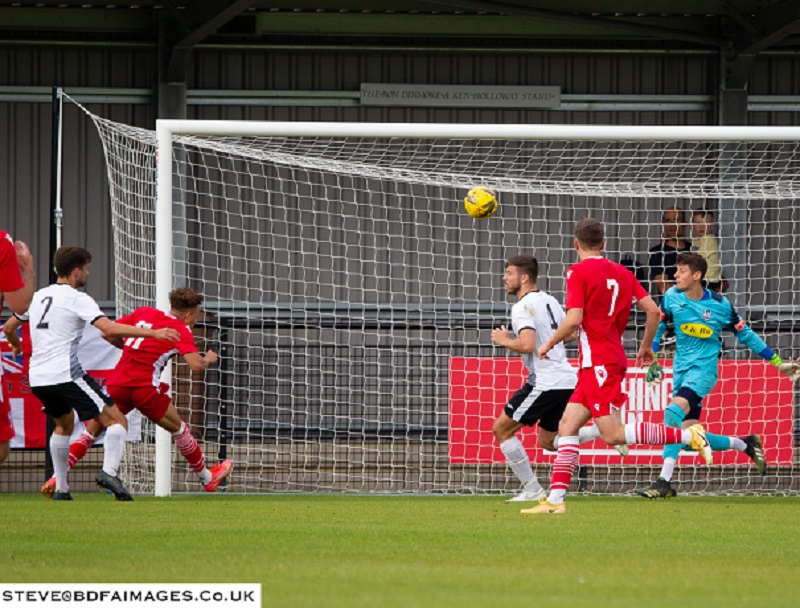 Ryan Campbell gets in low at the far post to head home the winner
Photo © www.bdfaimages.co.uk Match Album

Just before the hour Marine had their lead. Conor McDonagh did well on the right and whipped over a superb ball to the far post that left the keeper stranded at the near post. RYAN CAMPBELL was the quickest to react to the cross and nipped in front of his marked and headed the ball over the line from close in! Our control of the game was now reflected in the scoreline. 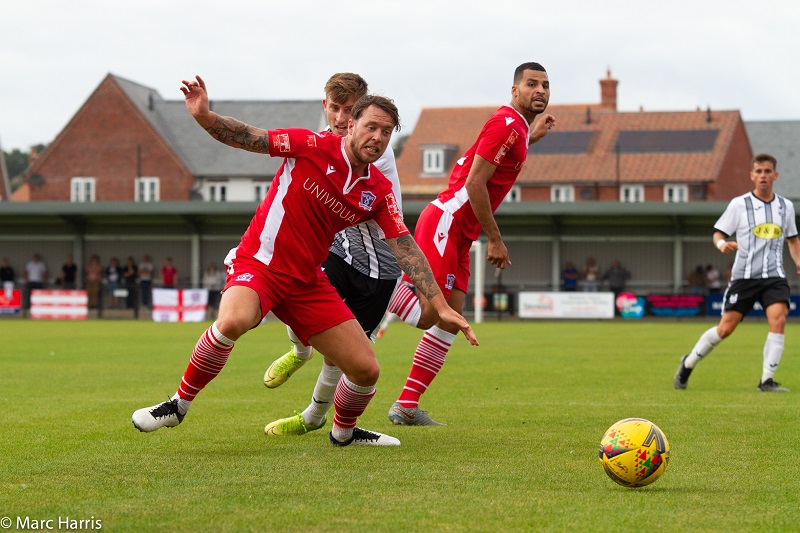 Pierce Mitchell had a good half after coming on at the break
Photo © www.bdfaimages.co.uk Match Album

Wimborne rang the changes with 20 minutes to go but still Marine pushed on for a third goal. Henry Spalding’s had a great effort repelled by the home keeper before George Dowling came on for the last ten minutes replacing David Pratt who had put in an excellent shift once more. Penalty shouts came and went at both ends – both rightly turned down by the official but Marine managed the game well for the last period to see out the match. Both substitutes, Mitchell and Dowling added more solidity to the game for the visiting reds in the second half. 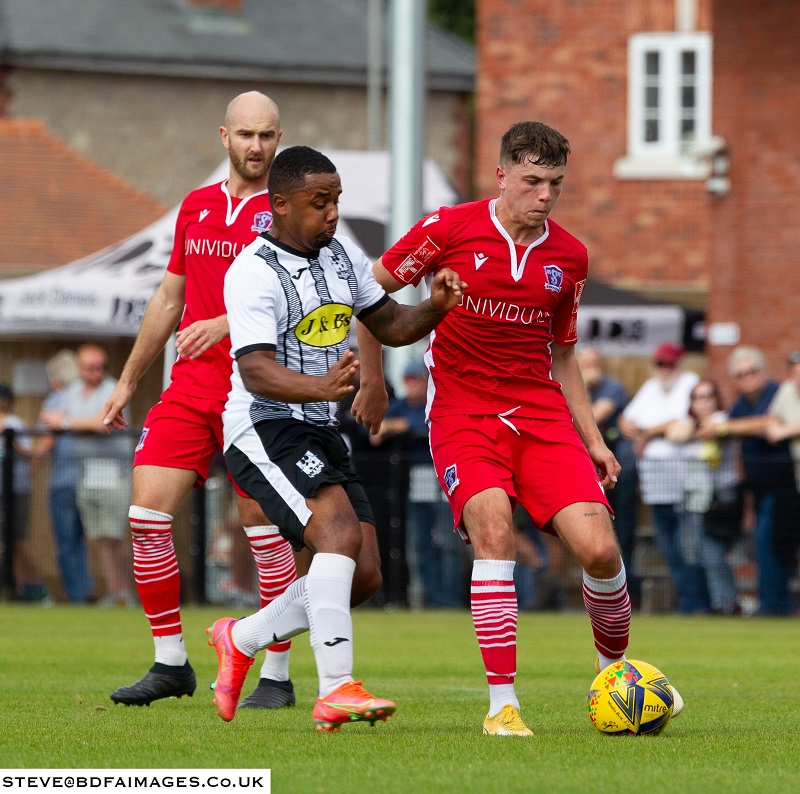 A deserved hard fought victory as Wimborne Town who were very resilient defensively and determined not to be beaten by more than one although Marine coasted to the win at the end perhaps with one eye on the Bank Holiday encounter with Farnborough. An excellent attendance of 377 filled out the ground but the only voices that could be hear at the end with red army echoing the excellent away support! Well done all! An excellent day out! 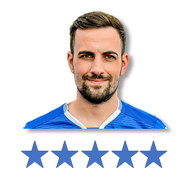 Match Highlights
Post match with David Pratt and Connor McDonagh
Access to the highlights from all of Marine’s matches can be viewed on a monthly subscription of just £2:50. Click the ’match highlights’ above to subscribe.