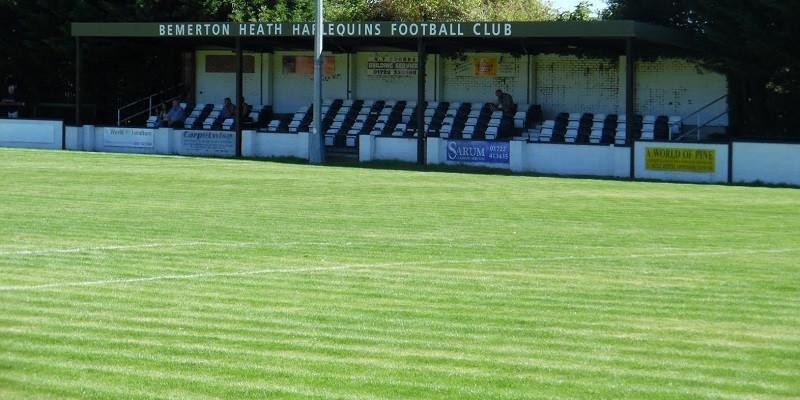 HOLDERS START THEIR DEFENCE IN STYLE

Swindon Supermarine were in Wiltshire Premier Shield action on Tuesday night as they travelled down to the Salisbury area to take on Wessex League side Bemerton Heath Harlequins in the first round of the competition. Manager Lee Spalding made four changes to the side that demolished Dartford with cup tied duo Joe Tumelty and Will Tunnicliff back in the side along with Leon Morrison slotting into defence and Conor McDonagh up top.

The hosts came out of the traps firing and nearly went ahead early on with keeper Liam Armstrong stopping a firm shot, but the ball deflected back, and Sam Turl had to head the ball over. But that was as good as it got for Bemerton with Zack Kotwica in a forward position looking lively fizzing an effort just wide soon after.

However, it didn’t take long for him to find the back of the net. A Tumelty free kick was headed down by Mat Liddiard and ZACK KOTWICA flicked home from close range on seven minutes to give the holders the lead and also his fifth goal of the campaign. Despite dominating the play, the hosts were defending stoutly and despite a series of corners Marine could not seem to add a second.

On the half hour Bremerton’s George Bennett went into the book for a foul as Bemerton were growing into the match. This was emphasised by Conor McDonagh picking up his own yellow card for a silly foul after losing the ball. Will Tunnicliff seemed to be pulled down in the box late in the half but there was nothing doing from the officials late on. But Marine got a vital second goal before the break when Conor McDonagh played the ball into HENRY SPALDING who casually and calmly curled the ball left footed into the far corner on forty-three minutes.

A solid if not spectacular half but there was a shock in store when the teams came back out. Some very slack defending by the Marine defence saw the ball fall for REECE RUSHER on the edge of the box and he lashed in emphatically into the roof of the net to give Bemerton a goal back minutes into the second period. But this kicked Marine into life and a few minutes later Kotwica intercepted and broke away from the defence before setting it up on a plate for HENRY SPALDING to grab a brace with a neat finish and a 3-1 score line to Marine.

Progress in the competition was wrapped up when Ryan Campbell’s run and cross was bundled over the line by CONOR McDONAGH for 4-1 on 57 minutes. This enabled manager Lee Spalding to bring on U18 youngster Casey Spencer-Harding for a half hour spell in place of Henry Spalding. It was a good run out for him as he showed some neat touches and play on only his second appearance for the club. With 25 minutes left Bemerton made it harder for themselves when a high challenge from George Bennett on Sam Turl saw him rightfully dismissed from the field with a second yellow card. Luckily, Sam Turl came away from the lunge unscathed and was fine to carry on.

On 73 minutes it was 5-1 with RYAN CAMPBELL getting on the scoresheet after a quick one-two with Kotwica before a neat finish at the near right post as he sat the home keeper down. With five minutes to go ZACK KOTWICA added his second of an impressive display on the night with a simple finish into the corner of the net for a 6-1 win. It was a comfortable win against our lower-level opponents who battled well on the night, but a banana skin well avoided with a solid professional display.