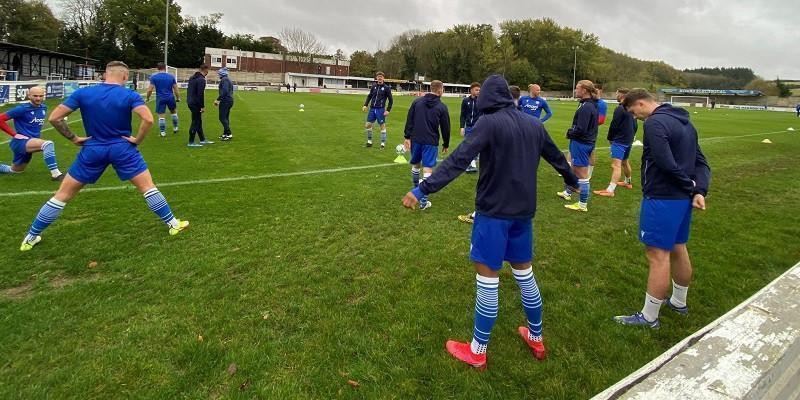 MARINE MAKE THEIR POINT AGAINST THE GENERALS

Swindon Supermarine travelled to the Meadow to take on Chesham United in a return to league action following their excellent FA Trophy win last weekend. Manager Lee Spalding missed out with illness so assistant boss Charlie Griffin took the reins and made a couple of tactical changes. Cup tied Joe Tumelty and Will Tunnicliff returned to the starting line up with James Harding ruled out with a back injury and Conor McDonagh dropping to the bench as Marine went with a 4-5-1 line up.

The change seemed to work a treat as the high-flying Generals struggled to get going and it was Joe Tumelty who was the first to nearly break through but was shrugged off the ball at the end. The hosts who had scored freely all season were well shackled by an excellent back four display by the Marine defenders and the chances were rare at both ends.

Just after the half hour Chesham forward Ricardo German went in very late on keeper Josh Gould and earnt himself not just the yellow card but also an early departure with injury as he came off second best. Deep into first half injury time Harry Williams found himself in the book as well for a lunge on Chesham defender Steve Brown.

A good first half for Marine keeping the Chesham front line so quiet. Marine started well again in the second half with the out-stounding work rate all over the pitch which led to Chesham making a second change with Jack Connors coming on for Antoine Makoli who had no joy up against Sam Turl.

By the hour mark Marine were looking the more likely to opening the scoring but Chesham decided to throw a few more forward in the last twenty minutes and the pressure started to be exerted. From one of these chances on 71 minutes top scorer Karl Oliyide played a one-two with Jordan Edwards but his finish came back off the inside of the post. Almost instantly Marine broke and a great ball in from Ryan Campbell saw Harry Williams get his studs to the cross but not enough to divert the ball home as it went wide of the goal!

With legs tiring on the heavy surface spaces finally started to appear and Marine replaced Zack Kotwica with Henry Spalding on seventy-four minutes. Mat Liddiard blocked a goal bound shot soon after before George Dowling then replaced Joe Tumelty in midfield for the last ten minutes.

Chesham were now throwing the preferable kitchen sink at it and Marine keeper Josh Gould made an excellent tip over the top. On eighty-three minutes Marine broke away and Harry Williams appeared to be brought down in the box as he nicked the ball off a defender, but the referee waved away the Marine appeals. Tyrone Duffus then got on the end of a deep corner on eighty-four minutes but headed it wide before the deadlock was finally broken by the hosts.

From a free kick, and not dissimilar to the “foul” not given on Williams, by Zack Kotwica just outside and to the left of the penalty box, defender Jean Prosper headed home Frankie Sutherland’s free kick as he got to the ball just ahead of keeper Josh Gould to head home. Harsh on the reflection of effort given on the day but Marine would not give up and showed tremendous character. Conor McDonagh was thrown on in place of Jamie Edge and Chesham were into the time-wasting period of the match with Chesham’s Jack Connors seeing yellow for kicking the ball away.

Deep into injury time Marine got their just reward. With a Chesham defender passing the ball across the pitch straight to Harry Williams who somehow found himself with just a defender and the keeper to beat. He produced some neat trickery to beat that one remaining defender before smashing the ball past Sam Beasant in the Chesham goal. That’s 19 goals for the season now for Harry with 15 in the League and for someone playing pretty much as a lone striker and who never stopped running, a worthy reward for him too.

A great point against one of the best attacks in the league. Credit to everyone, especially the back four of Sam Turl, Mat Liddiard, Tyrone Duffus and Will Tunnicliff who were immense. And of course, well done to Harry Williams who got the fan’s player of the match once again! What a season so far for him!