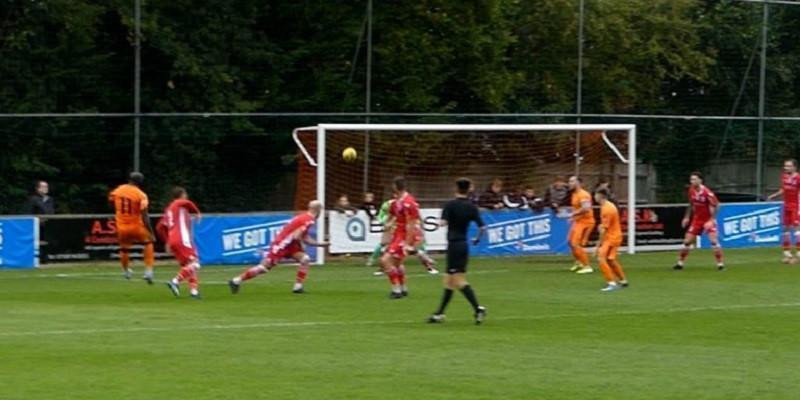 MARINE OUT OF LUCK ONCE MORE

Swindon Supermarine made the shorter trek to the Row, the home of Hartley Wintney on Saturday afternoon bidding to win their first game in the league since August 31st. Manager Lee Spalding made three changes, Michael Hopkins returned at right back with Pierce Mitchell switching to centre back, Jamie Edge returned in midfield alongside Brad Hooper and Mat Liddiard and Conor McDonagh replaced David Pratt who was unavailable up front. Frankie Artus returned from injury on the bench. 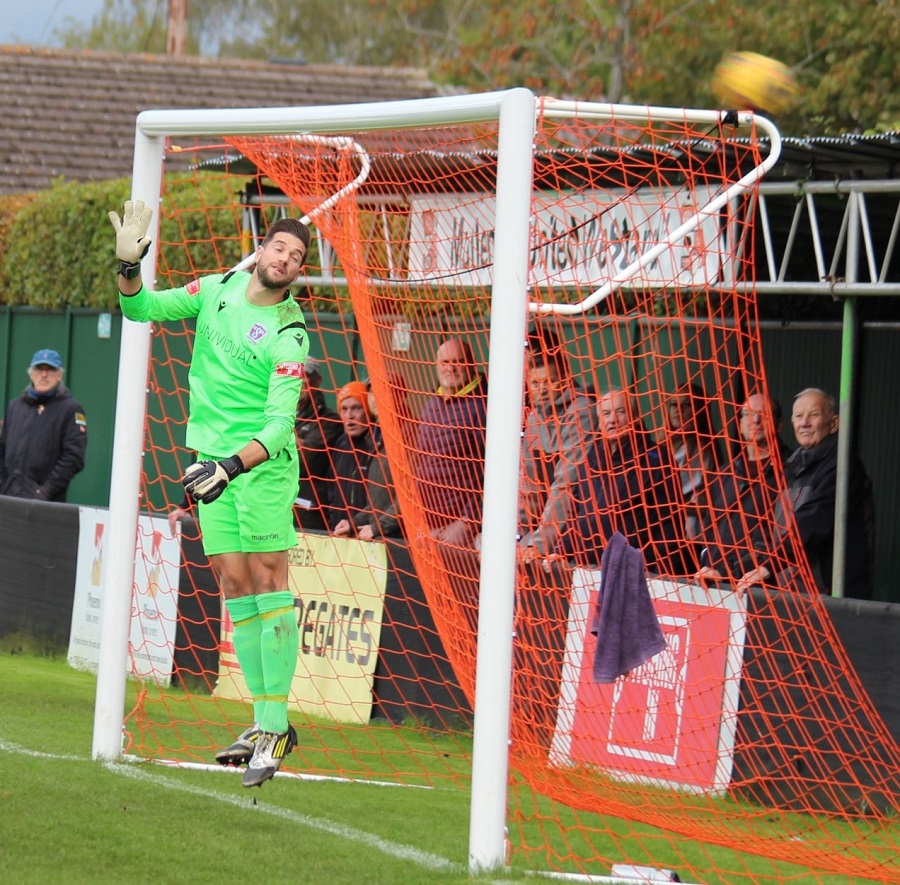 The hosts started the better and put some early pressure on but good defending from Tyrone Duffus repelled an early ball in from Wylie. Free kicks at both ends came to nothing before the first real chance of the game. Conor McDonagh was played in by Lewis Hall with a ball over the Hartley defence. He broke away from the back line and his excellent shot beat the keeper only to bounce back off the bottom of the post and to safety. Pierce Mitchell was booked soon after for a late challenge on Kingsley Eshun. Martin Horsell made a good save with the foot on 20 mins from Sam Argent with the game end to end. Ryan Campbell had a strong run on the half hour but could only find the side netting. A quite half except for that massive chance for Conor McDonagh. 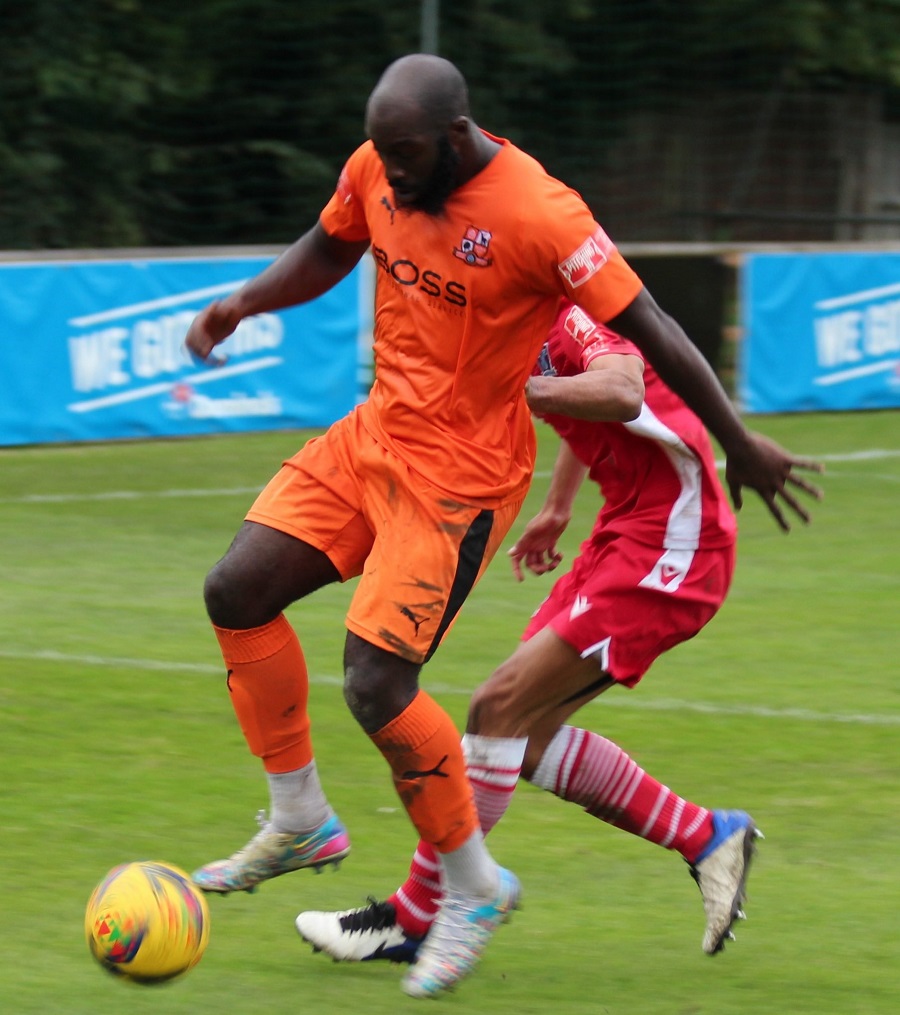 The second half had to be better from both sides and so it proved with Marine came flying out the traps. An excellent team move saw Henry Spalding set it on a plate for the inrushing Brad Hooper but he somehow got it all wrong and skied the effort over the top with the goal gaping. Ryan Campbell continued to look very lively down the left putting over cross after cross to the front men. 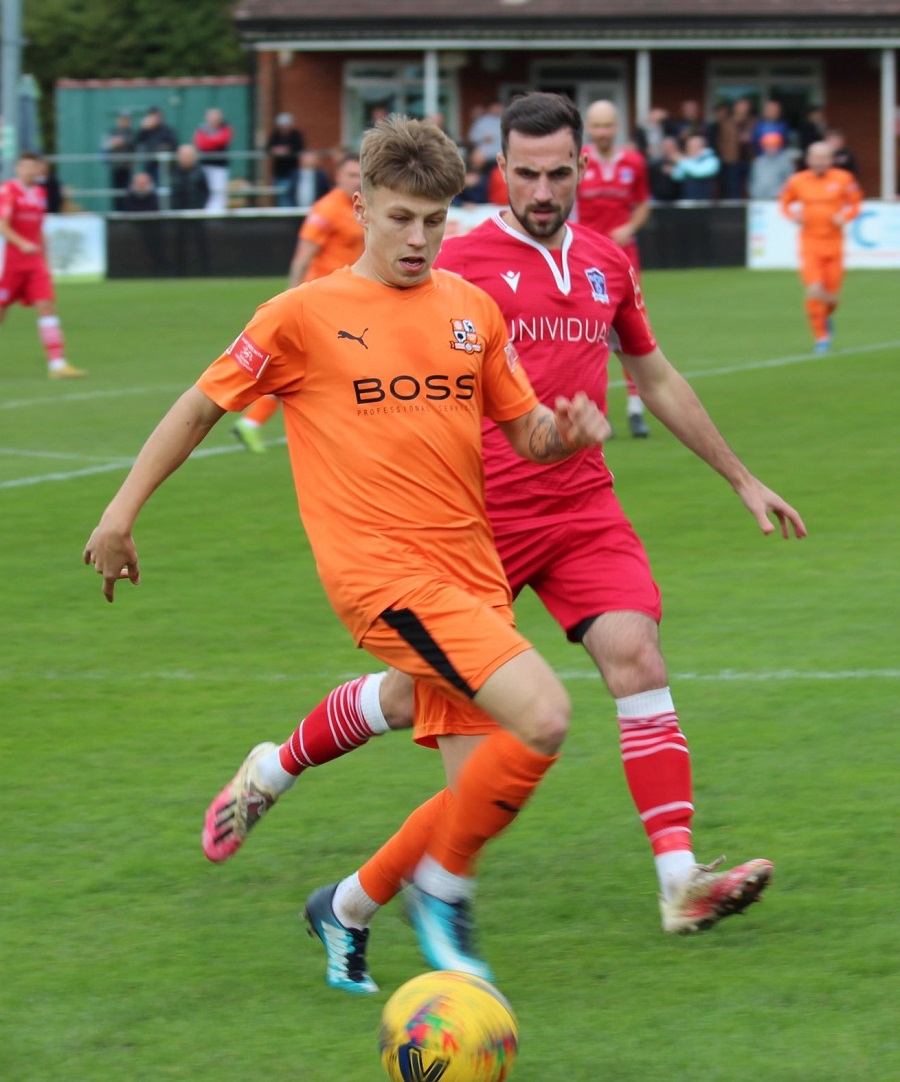 And then out of the blue it was 1-0 to the hosts. A first attack of the half from Hartley, Reece Wylie intercepted a tackle and played the the ball to KINGSLEY ESHUN on the edge of the box who was given a little too much space just inside the box and allowed to cut inside and he produced a sublime curling effort into the top corner of the net on 57 mins. On 64 minutes George Dowling came on for Brad Hooper. 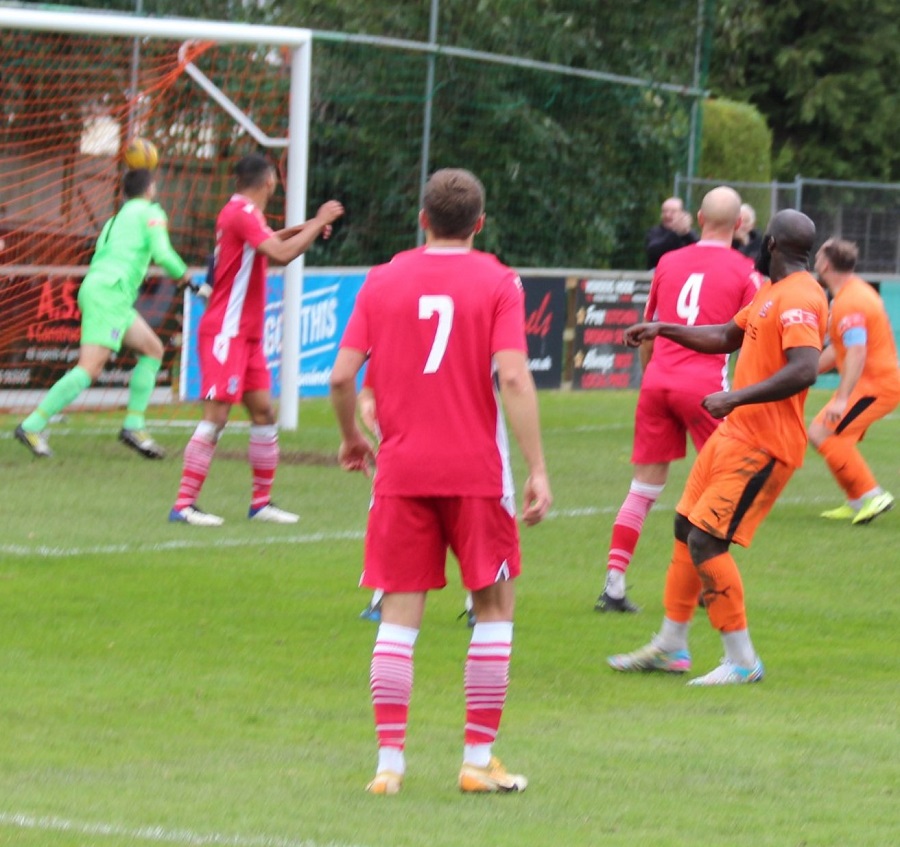 With something to hold on to the hosts decided to adopt the approach of keep what we had. Centre back Pascal Kpohomouh was booked for a tug on Conor McDonagh on the hour. Michael Hopkins fired in a super cross for Ryan Campbell which he just headed wide of the post. Chris Zebroski was introduced with 21 mins left in place of Pierce Mitchell with Mat Liddiard dropping back to defence, in a bid to get back in the game. 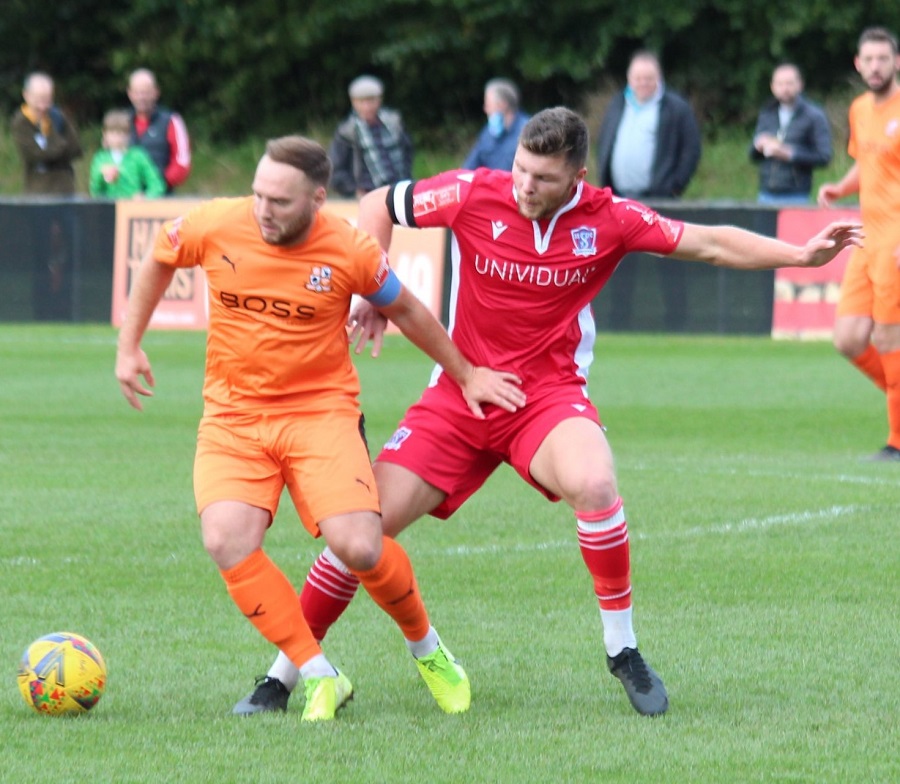 A stray pass out of defence was picked up the the hosts Josh Webb whose shot was well held by Martin Horsell before George Dowling’s dangerous cross was punched away theatrically by the home keeper Luke Williams to keep the lead intact. Conor McDonagh had a strong run and saw his shot deflected wide. Ryan Campbell who never stopped running all afternoon, beat his man once more only to see his cross hit high and wide by Henry Spalding a couple of yards from the goal line. 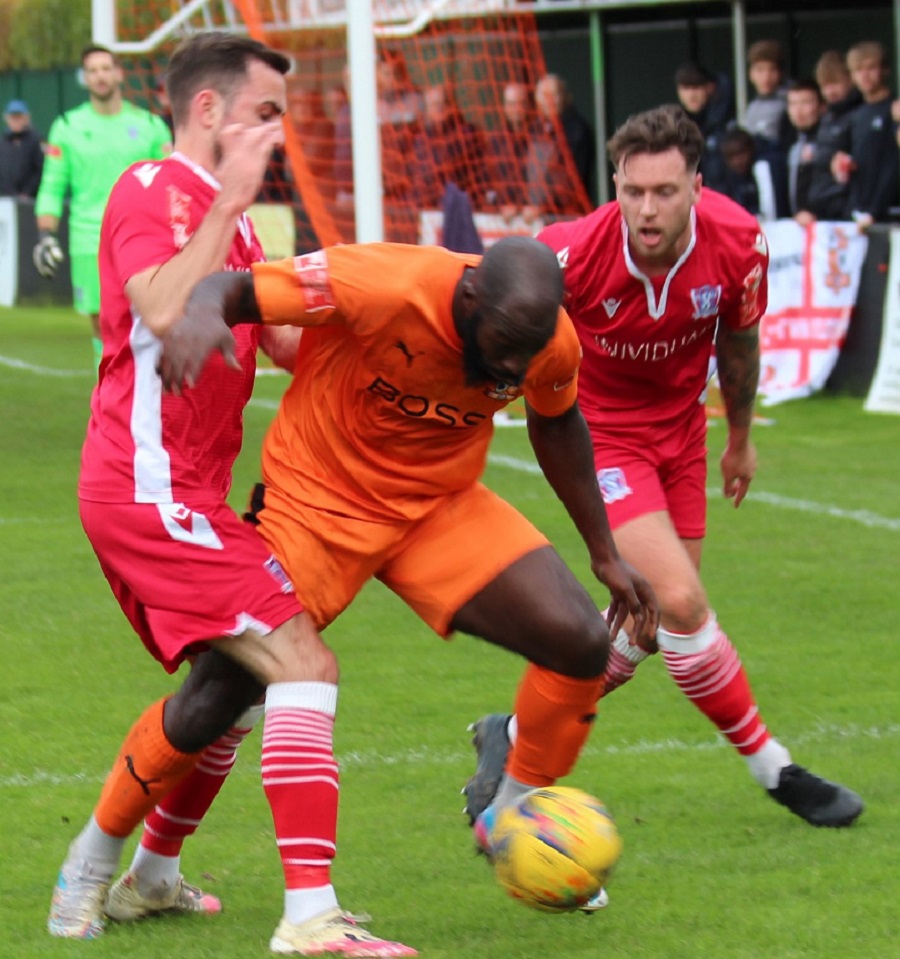 Hartley were by now desperate to hang on and Reece Wyler was booked for timewasting and late on Sam Argent put in a really bad challenge on Ryan Campbell and after a long delay and a few scuffles he only saw a yellow for the challenge. Despite the pressure and a much improved overall display once again Marine found themselves the wrong side of what was ultimately disappointing 1-0 defeat. Luck certainly deserting the team of late with the shot against the post, some last ditch defending from the home team and one glaring miss that nine times out of ten would be put away.

We get a rest from league action next weekend, instead visiting Tiverton Town in the FA Trophy as we look to go deep in the competition. As long as the effort continues as it did today our luck has to turn soon. Keep the faith!