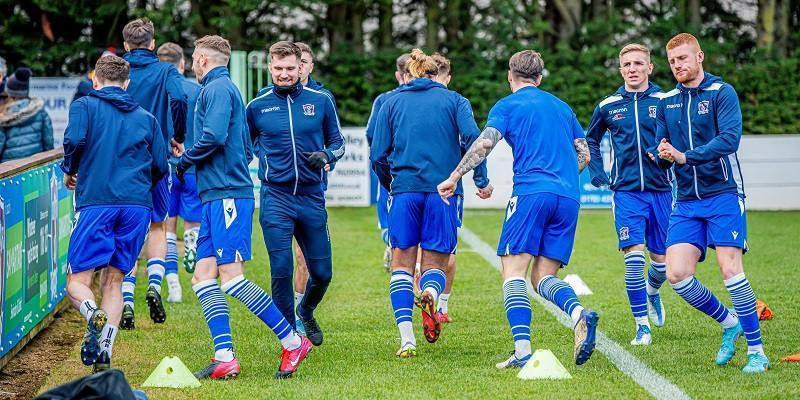 Marine were back in action at the Webbswood Stadium on Saturday afternoon as they took on another playoff chasing team in Truro City hoping to damage their hopes as they did Yate Town the weekend before. Unsurprisingly manager Lee Spalding chose not to alter a winning line up although Brad Hooper returned to the bench having missed the last game and George Dowling was ruled out with illness once more. 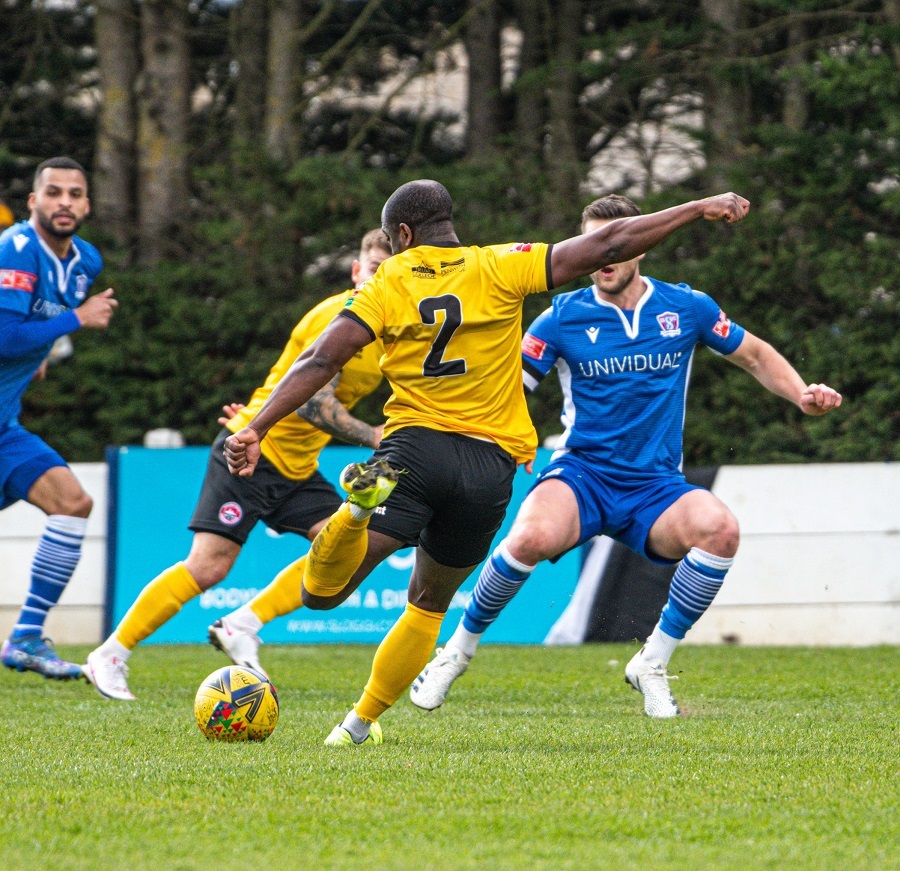 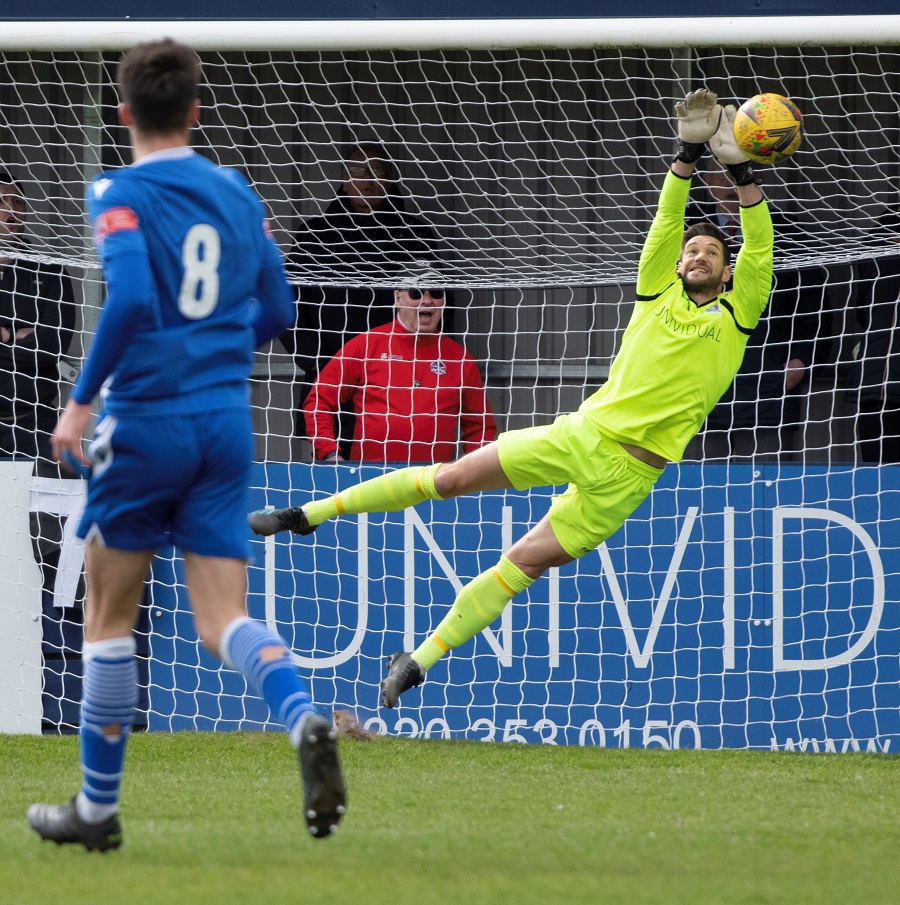 It was a cagey tight start to the match with both sides concentrating on making life hard for the opponent leading to very few clear cut openings being created. On twenty-three minutes the first effort of the game on target arrived when visiting full back Niall Thompson hit a fierce drive which drew an excellent save as keeper Martin Horsell pushed the ball around the post. 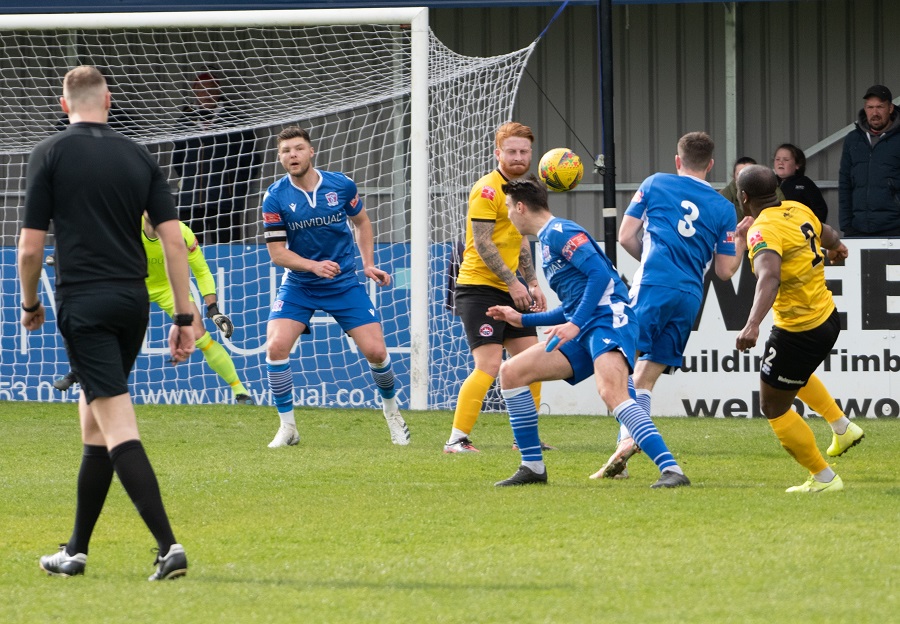 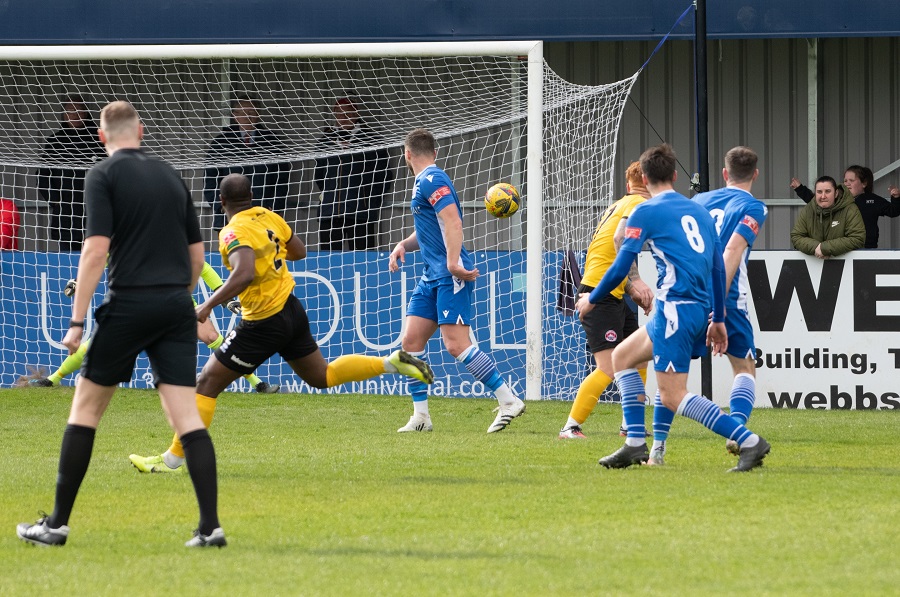 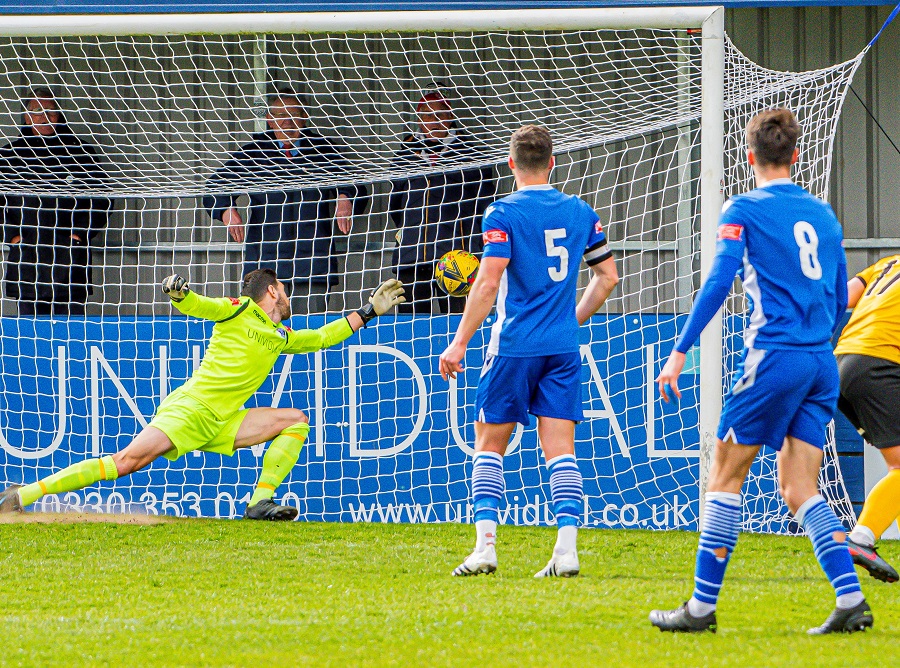 But Truro were quick off the mark in taking the set-piece catching Marine off guard. The clever routine saw the ball come back to NIALL THOMPSON on the edge of the box and his shot was heading towards the hands of Martin Horsell by took a wicked deflection off Tom Sharpe and wrong footed Horsell and ended up in the bottom corner of the net. Marine were still struggling to put anything together and the only further shot of the first half came from the visitors again when an effort from Will Dean was pushed away by Horsell . With four weather conditions arriving before half time, sun, rain, snow and wind, the game petered out to the break. 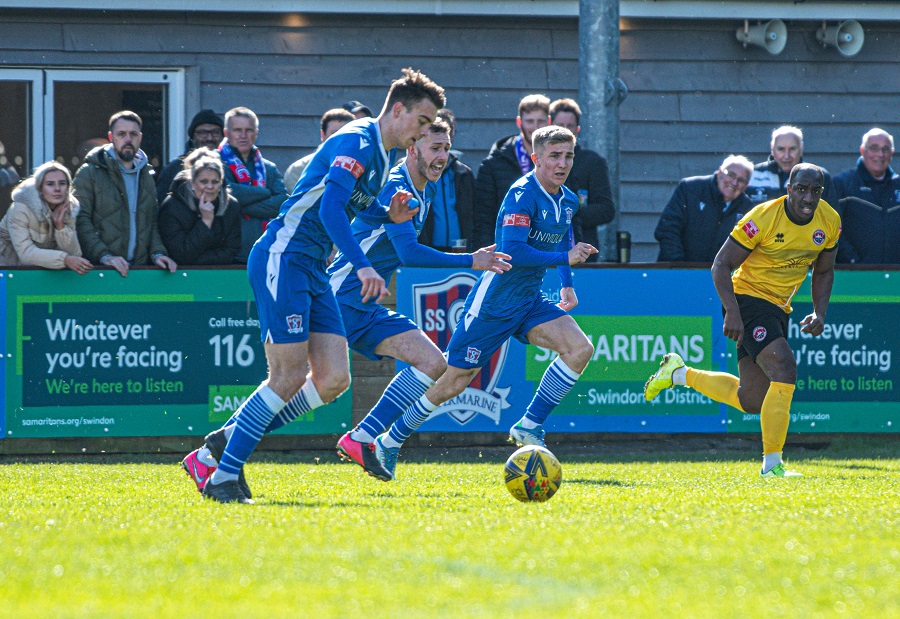 With Marine looking to step it up a gear in the second period Truro now had something to hold onto and set about frustrating the home team. Finally a shot from the hosts arrived from Tom Sharpe on fifty-five minutes but it fired over the Truro crossbar. Martin Horsell was back in the action again soon after, as he pushed away a dangerous free kick taken by Rio Garside. 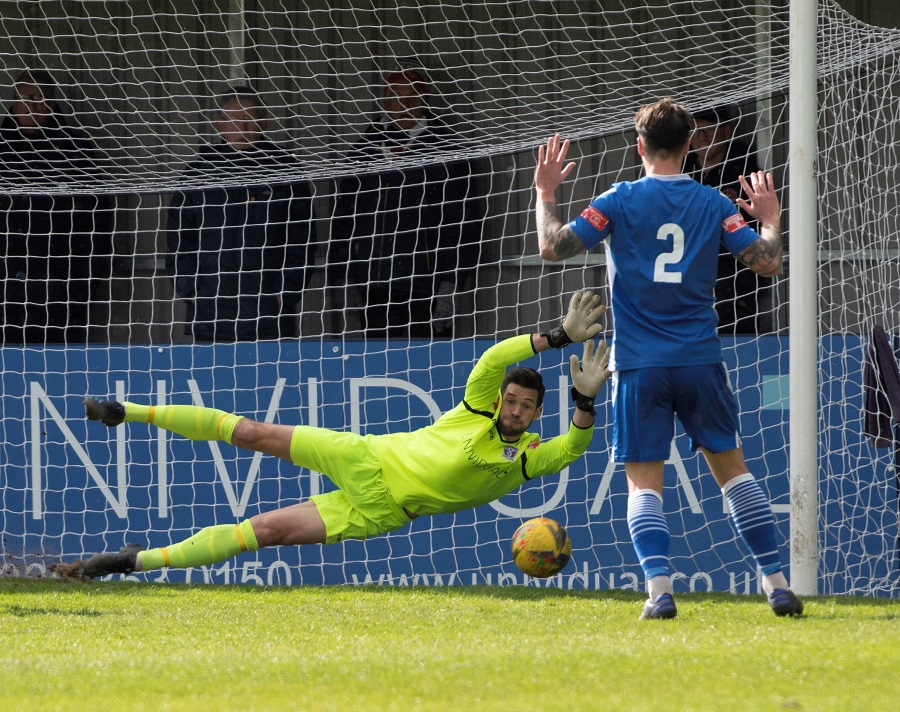 Lee Spalding decided something had to be done to pep up the performance and turned to the bench on the hour. With both Conor McDonagh and Zack Kotwica replacing Harry Williams and Henry Spalding. It seemed to have the desired effect when McDonagh went on a dangerous looking run only for the Truro defenders doubling up to clear the ball at the last attempt and deny him a shot at goal. 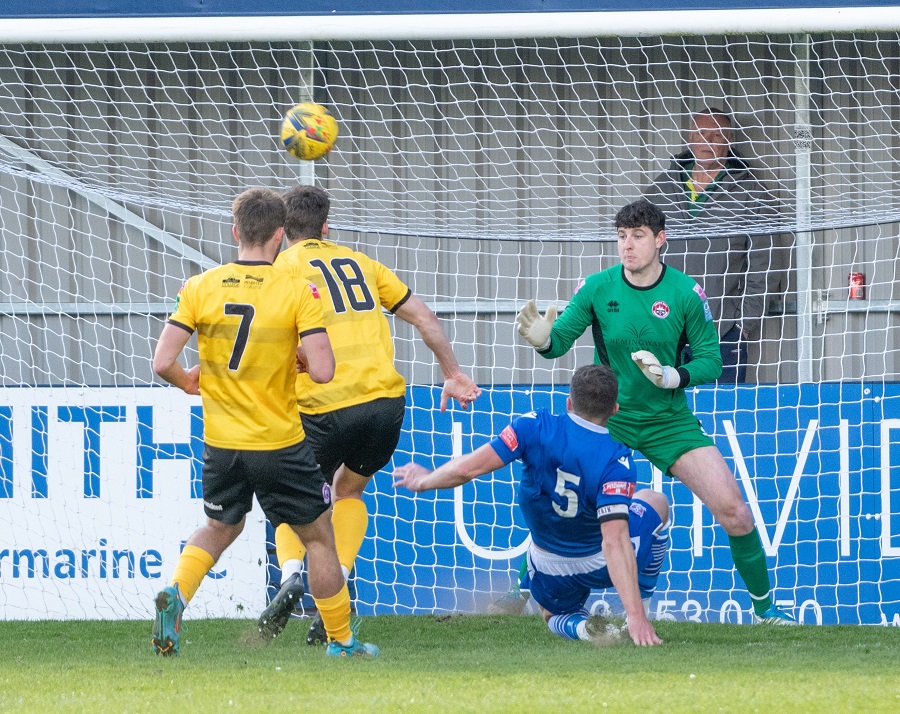 In truth though not much was happening from either side until fifteen minutes to go when Will Dean came close for Truro, capitalising on a misplaced pass by Martin Horsell he missed a good chance as he fired the ball wide of the post. The best chance on the day for Marine came with ten minutes left. After a couple of fouls on the left wing, the latter free kick was a teasing delivery by Jamie Edge that picked out the on rushing skipper Mat Liddiard and with Truro keeper James Hamon stranded on his goal line Liddiard had a great opportunity to score but he couldn’t keep his volley down and the chance went over the crossbar. 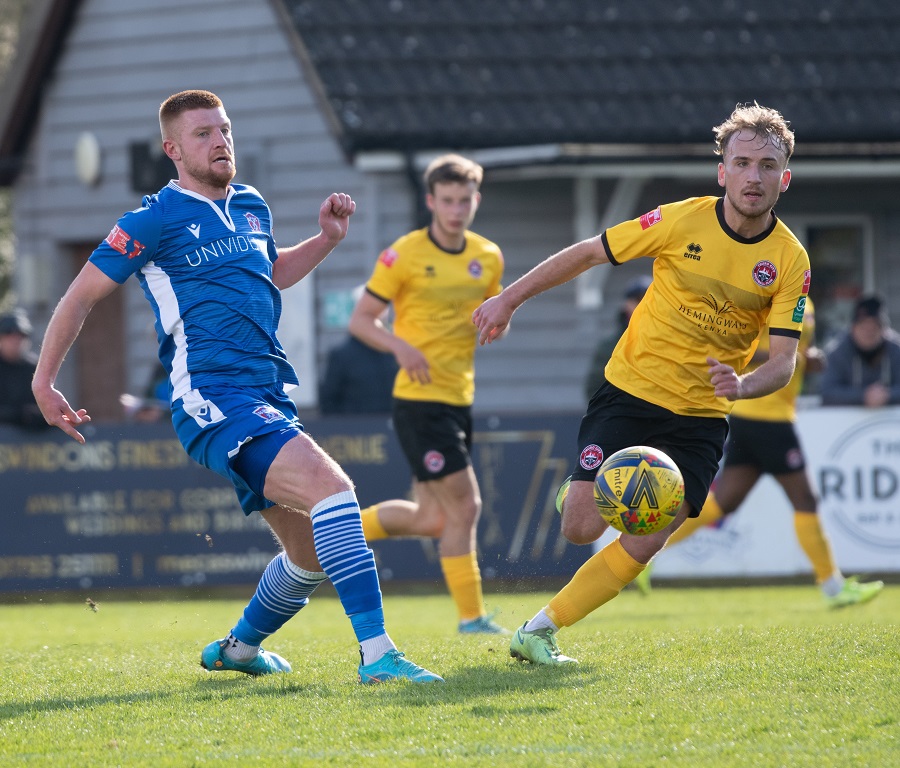 With ten minutes to go Matt Britton came on to replace Tom Sharpe and Truro held on for their well earned win and made it nine matches against Marine without defeat and keep the hoodoo in place. Not Marine’s day as nothing seem to come together and we now look forward to travel to Hertfordshire to take on relegation fighting Kings Langley away in a weeks time.

Fans player of the match: Jamie Edge – industrious and hard working on the day.