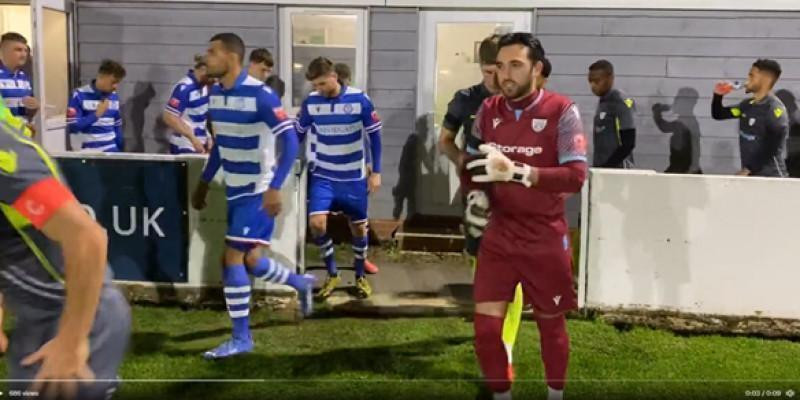 DEADLOCK AT THE WEBBSWOOD AS GEORDIES COME TO TOWN

Swindon Supermarine were in League midweek action as they entertained for the first time since the 2006/07 season newly promoted Hanwell Town at the Webbswood Stadium. The visitors had started the season brightly sitting just above Marine, fifth place in the table.

Manager Lee Spalding rang the changes after the first home defeat of the season on Saturday with new signing from Taunton Town Will Tunnicliff in at left back, Brad Hooper replacing the injury Tom Sharpe in midfield and Conor McDonagh and Henry Spalding returning in attack.

Hanwell came out looking very lively and Josh Gould was forced into an early one-handed stop. The game was end to end with Hanwell looking a quality opponent but Marine playing better than at the weekend to slightly shade possession. This eventually led to some goal chances with Harry Williams put through on twenty-three minutes, but Hanwell Hugo Sobte was equal to the challenge and from the rebound chance Henry Spalding could only shoot over the crossbar.

Good pressure was being applied by Marine and Harry Williams was denied again by the keeper. The top scoring forward man caused problems all night for the Hanwell back line and on the stroke of half time it saw a yellow card for Duncan who tripped the forward on the edge of the box. From the resulting free kick Joe Tumelty could only fire the ball over and the teams went in all square.

Marine had the first chance of the second half when Conor McDonagh was denied on the angle by the foot Sobte but it was the Geordies who then upped a level. From a long throw Kain Adom got a touch on the ball and it came back off the upright and was cleared. Keeper Josh Gould was called into action with a reflex save on fifty-four minutes, but the visitors were not to be denied in this period of sustained pressure. From a crossed ball into the box MAT McKENZIE flicked a header into the TOP corner of the net to break the deadlock.

The goal had been coming for about fifteen minutes, but this saw an end to the dominance by Hanwell as Marine moved their own game up a gear. Hanwell’s Lewis Cole was booked for a very late challenge on Tyrone Duffus. And from the resulting free kick the ball pinged around the box before coming out to debutant Will Tunnicliff. His effort was parried by keeper Sobte but HARRY WILLIAMS was the sharpest to react in the box to volley home the rebound and level the scores. His sixteenth goal of an incredible campaign and it’s not even November!

Hanwell still looked sharp on the break as Marine had the momentum, but it required Mat Liddiard to head an effort off the line with twenty minutes to go. Hanwell fullback Dan Carr had a fine run and shot well fielded by Gould on seventy-six minutes before Marine made their first substitute changes. With Zack Kotwica coming on for Henry Spalding and James Harding replacing Conor McDonagh.

Shortly after the changes Ryan Campbell had an effort well blocked with time running out and Leon Morrison replaced the excellent Will Tunnicliff who appeared to cramp up in injury time. With the game looking all but over a looping effort from the left by Hanwell appeared to be heading for the top corner only for Josh Gould to pull off an outstanding and point winning save. Overall, the draw seemed right and both sides side sit in the higher reaches of the table after this result.

Next up is Isuzu FA Trophy action as Supermarine travel to Winchester City looking to avenge last weekend’s defeat and grab a place in the next round.

FANS STAR MAN JOSH GOULD top class between the sticks, he is looking better with each game and that terrific late save epitomised his performance.