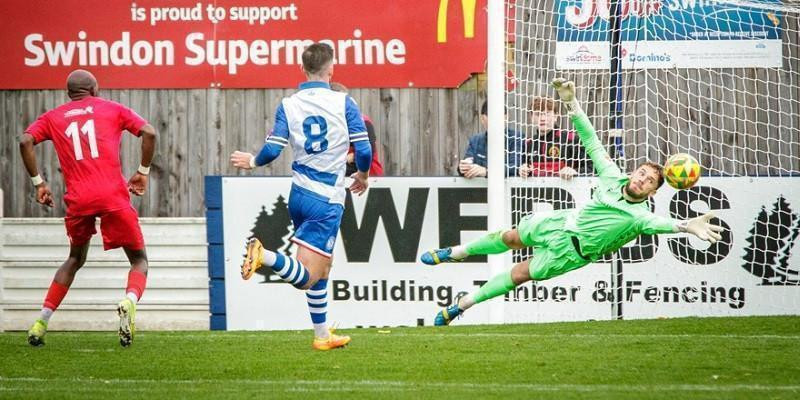 Swindon Supermarine saw their unbeaten league home record undone by a freak winner as Winchester City pulled off a smash and grab 2-1 victory at the Webbswood Stadium on Saturday. Manager Lee Spalding made a double change from the midweek victory over Harrow Borough with Ryan Campbell in for Henry Spalding and Tom Sharpe replaced Brad Hooper. Spalding and Hooper were on the bench with long term absentees George Dowling, Lewis Hall and Jamie Edge still missing out through injury. 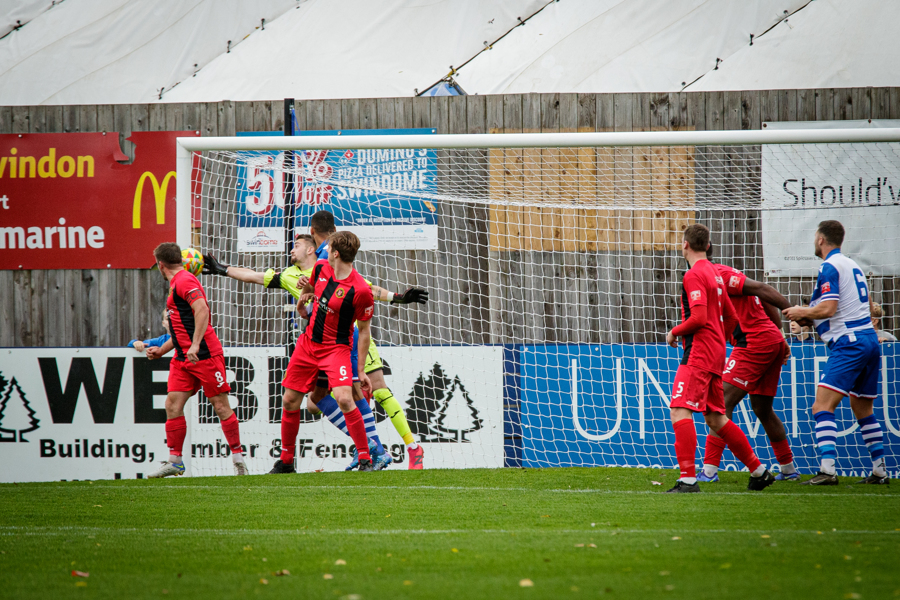 Marine looked lively early doors with Zack Kotwica hitting a curling shot off the bar in just four minutes. This was followed up by deflected efforts from both Harry Williams and skipper Mat Liddiard going wide. Williams then had a header from the resulting corner brilliantly saved by visiting keeper Jordi Valero Miret at the near post. City looked sharp on the break despite this and from one of these on fifteen minutes Jamie Barron had an effort well held by goalkeeper Josh Gould in the home goal. 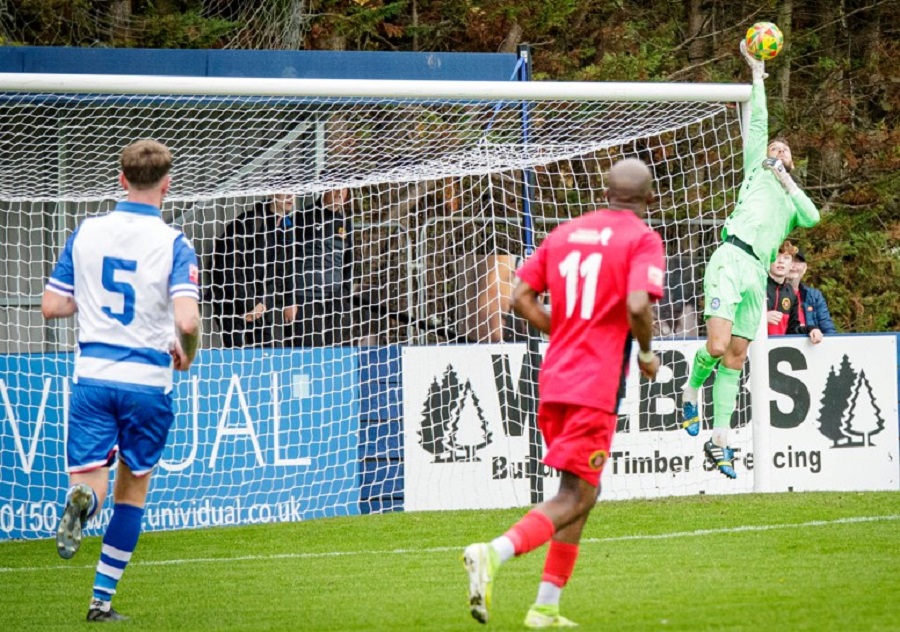 Both goalkeepers, Jordi Miret and Gould were the key man as Harry Williams was denied again followed by a save from Sim Miambo by Josh Gould (top photo). Tom Sharpe took a knock to the knee on twenty-five and had to be replaced by Brad Hooper. Marine were looking the better of the two sides and put together a great team move late on in the half, but Williams couldn’t find his scoring boots and fired over. Winchester centre forward Darko Obeng was booked for a late one on Sam Turl as the half came to an end in what was turning into a physical encounter. 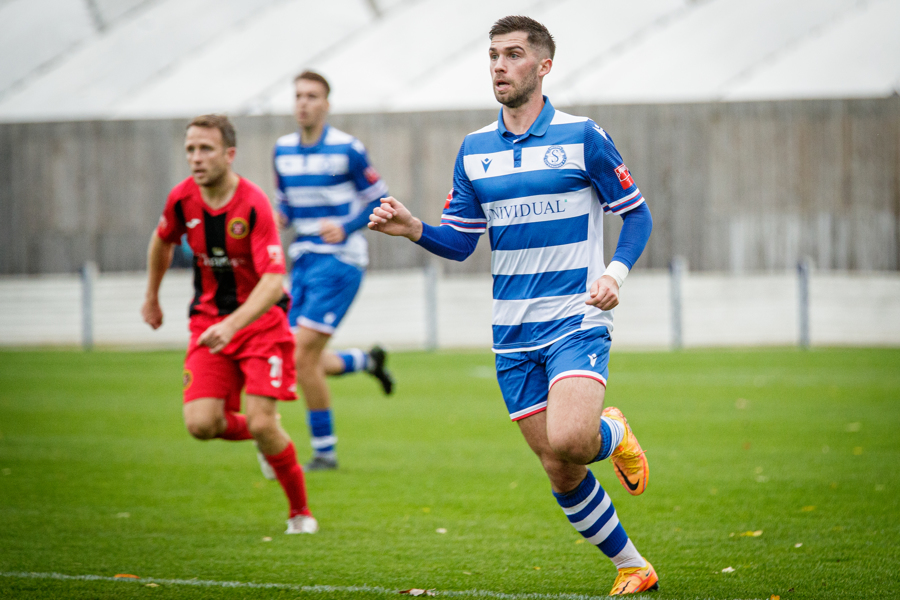 Marine got off well again with Harry Williams rounding the keeper but being forced too wide he could only find the side netting. A series of mistimed and late tackles saw a flurry of yellow cards for City as Max Smith, Josh Bertie and Callum Baughan were all booked. In between this Miambo missed a great chance to open the scoring but Winchester were wasteful in front of goal. Once again, the outstanding Jordi Miret deniedHarry Williams just after the hour before the deciding moments came with twenty minutes left. 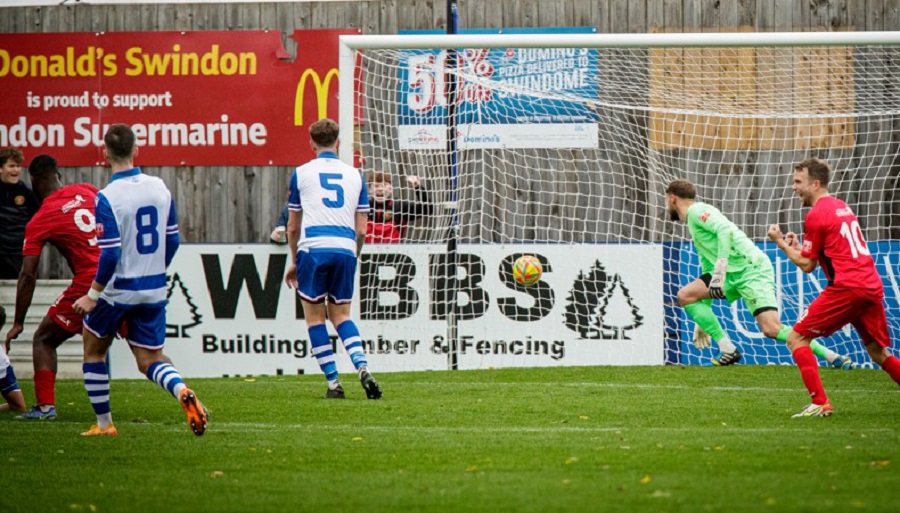 DARKO OBENG seized on a header won by Warren Bentley, who out jumped Tyrone Duffus to fire in low past keeper Josh Gould from the edge of the box to give the Citizens the lead. Direct from the kick off Marine played the ball back to defence. With keeper Josh Gould making an angle for Mat Liddiard to pass to him, Liddiard made the decision to send the ball forward. His attempted clearance was blocked by the advancing WARREN BENTLEY and the ball flew back past Gould for two goals in a minute. 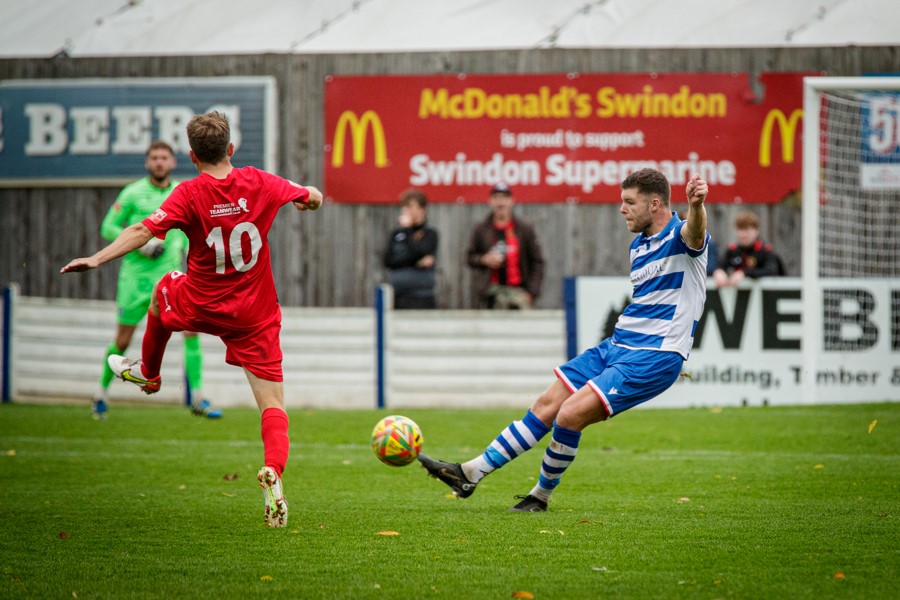 There was now a mountain to climb, and Conor McDonagh and Henry Spalding were sent on in place of James Harding and Zack Kotwica to try and save the day. Marine did get a goal back five minutes later with substitute CONOR McDONAGH smashing a low shot home after a Joe Tumelty free kick into the box fell loose. 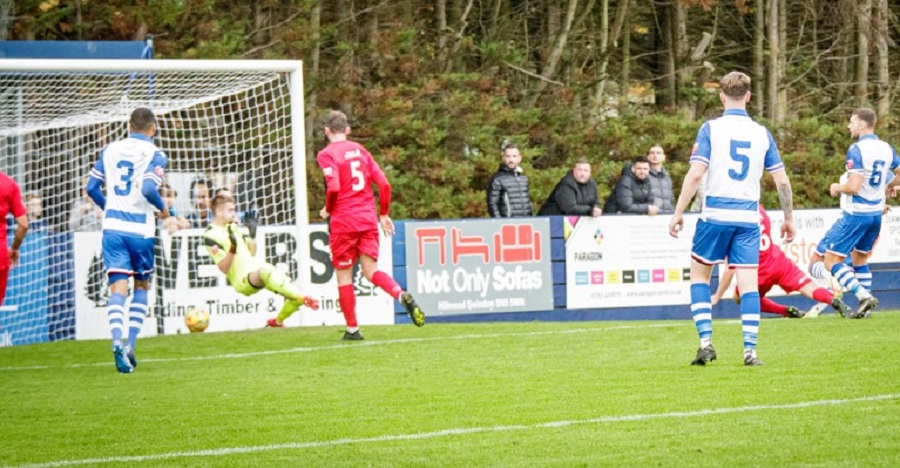 This late to a flurry of late pressure but keeper Jordi Miret was the hero again to deny McDonagh a second on eighty-two minutes and deep in added minutes catching high under late pressure from home defender Ty Duffus as the kitchen sink went in from Marine with Josh Gould even going forward for a corner. Alas it wasn’t to be. An unjust score line in defeat considering the overall play but the heart, effort and passion of Winchester meant they had worked so hard to get what they did and no could really deny that in many ways you get what you deserve. 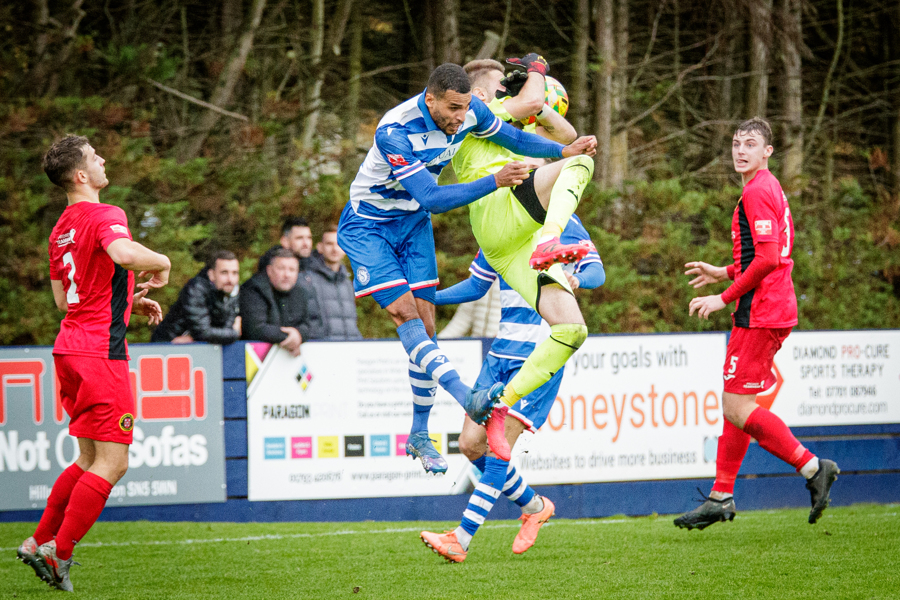