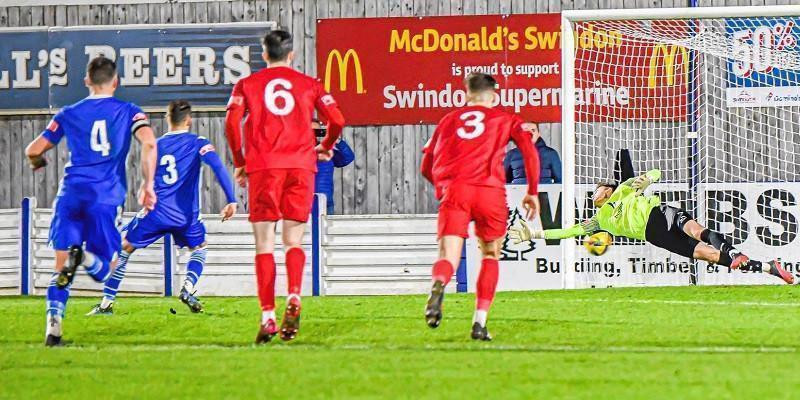 Swindon Supermarine had their second home game in the space of a few days when they entertained Harrow Borough at the Webbswood Stadium on Tuesday night. After the weekend defeat manager Lee Spalding made four changes to the starting line-up. New signing Zak Ford came in for Pierce Mitchell at right back, Tyrone Duffus returned to defence with Mat Liddiard moving into midfield replacing the injured Frankie Artus. Henry Spalding came in on the wing for Zack Kotwica and Michael Hopkins replaced Lewis Hall at left back. 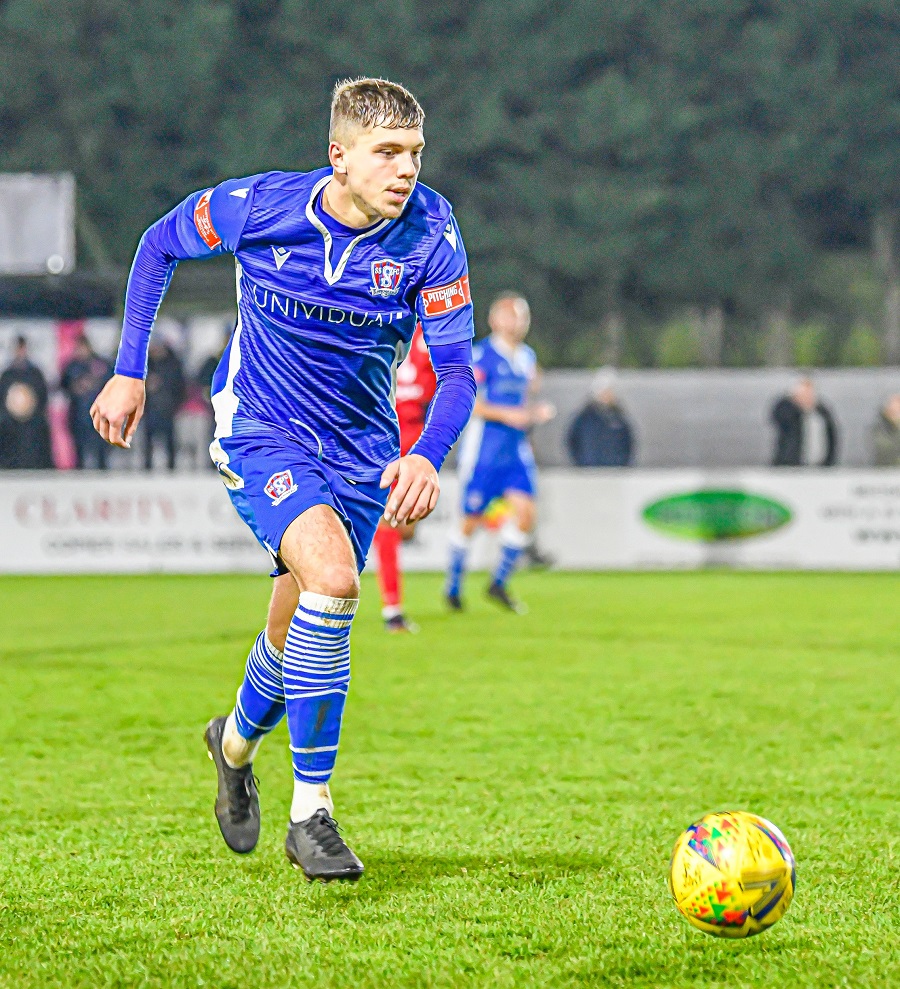 The Borough came flying out of the traps from the off, dominating proceedings with George Moore hitting an early shot that came rebounding off the crossbar. But the let off was short lived. On six minutes a corner was swung in and the ball somehow was bundled over the line by either Borough’s James Mansfield or Marine’s Tyrone Duffus as they tangled just a yard or so off the goal line with keeper Martin Horsell rooted on his line. JAMES MANSFIELD ran away celebrating so maybe he did get the last touch? 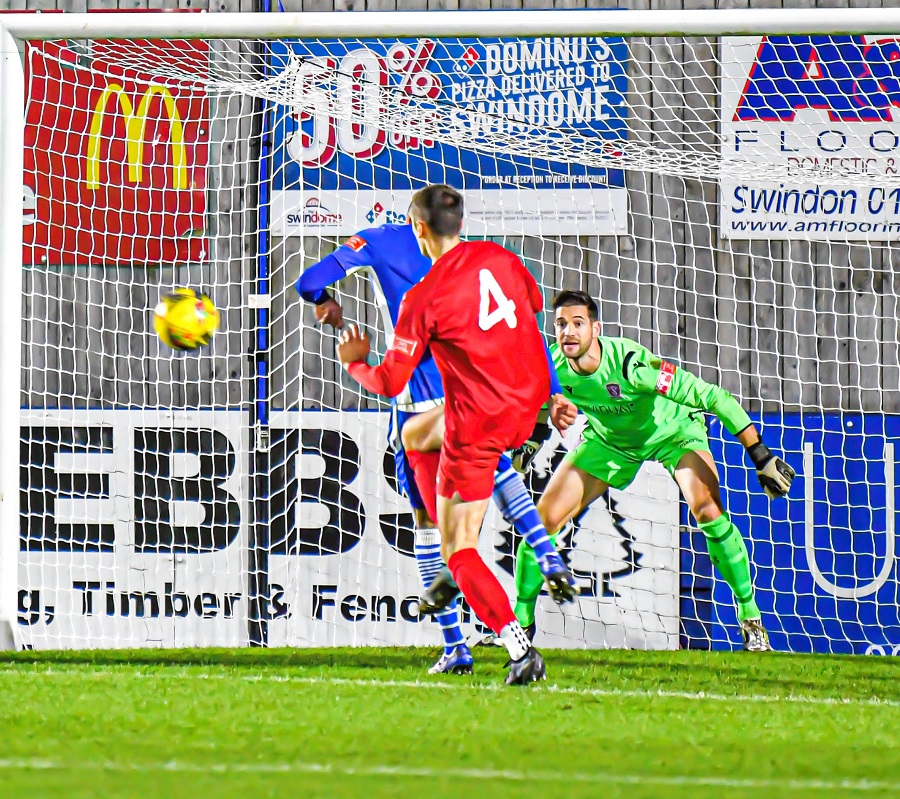 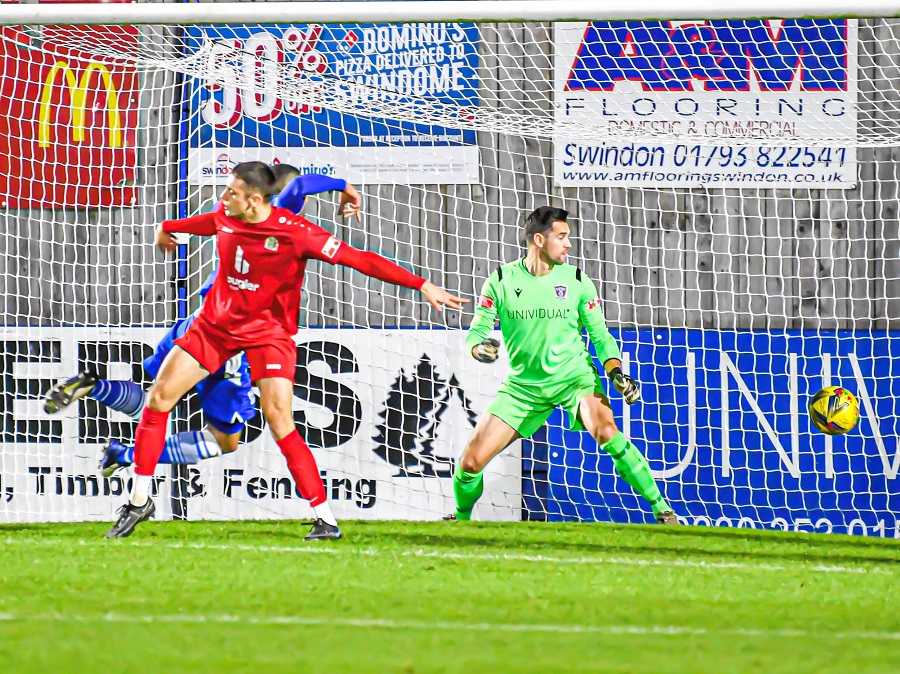 Marine tried to respond and a long ball through to Kieran Phillips was just got to by the visiting keeper Josh Strizovic. Then in an identical move at the other end Martin Horsell was not so fortunate when the ball was pumped over the head of Tyrone Duffus. JAMES EWINGTON ran on to the pass and just got there ahead of the Marine keeper to poke the ball into the empty net on 13 minutes for 2-0. A nightmare start for Marine. 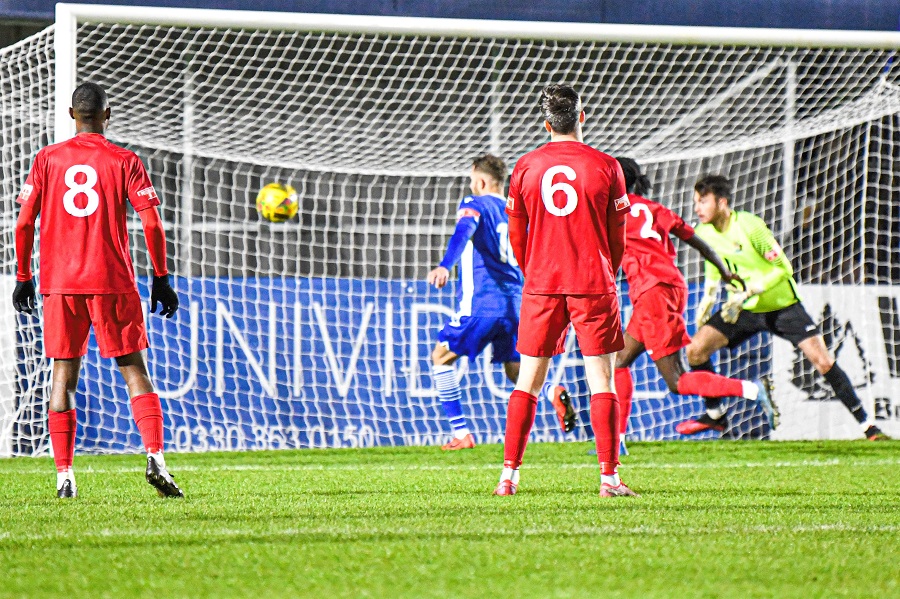 But this extraordinary game was only just getting going and two minutes later Ryan Campbell was fouled outside the box, on the left hand side of the pitch, and with Kieran Phillips running in behind the Borough defence the invitation was on for Campbell to slot the ball to Phillips whose intelligent run was rewarded when he slid the ball across the penalty box to HENRY SPALDING, who cut in from the right wing and smashed the ball into the corner of the net from the edge of the box. It was an excellent first time shot to get Marine back into the match just two minutes later! 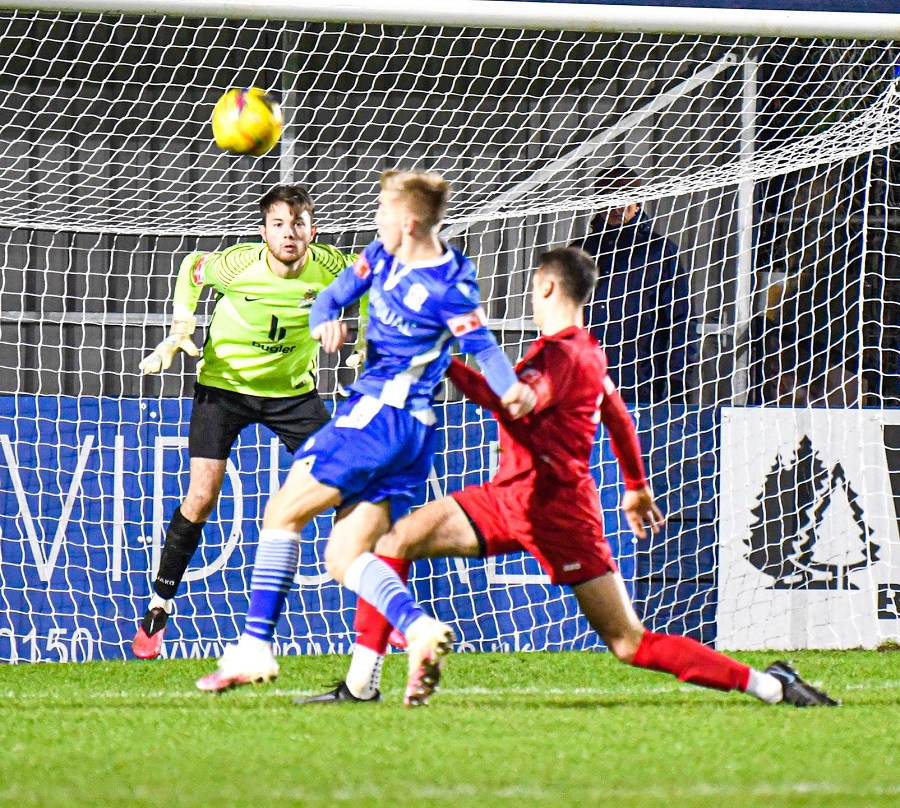 Suddenly Marine were in the ascendency. From a free kick on the edge of the box Phillips effort looped into the air off a defender and Mat Liddiard agonisingly headed just wide of the far post. On 19 minutes Michael Hopkins excellent run and cross was just put over the top of the goal by Kieran Phillips as the pressure was very much on the visiting goal. Brad Hooper was set up by the young forward soon after but smashed the ball wide from a good opportunity. 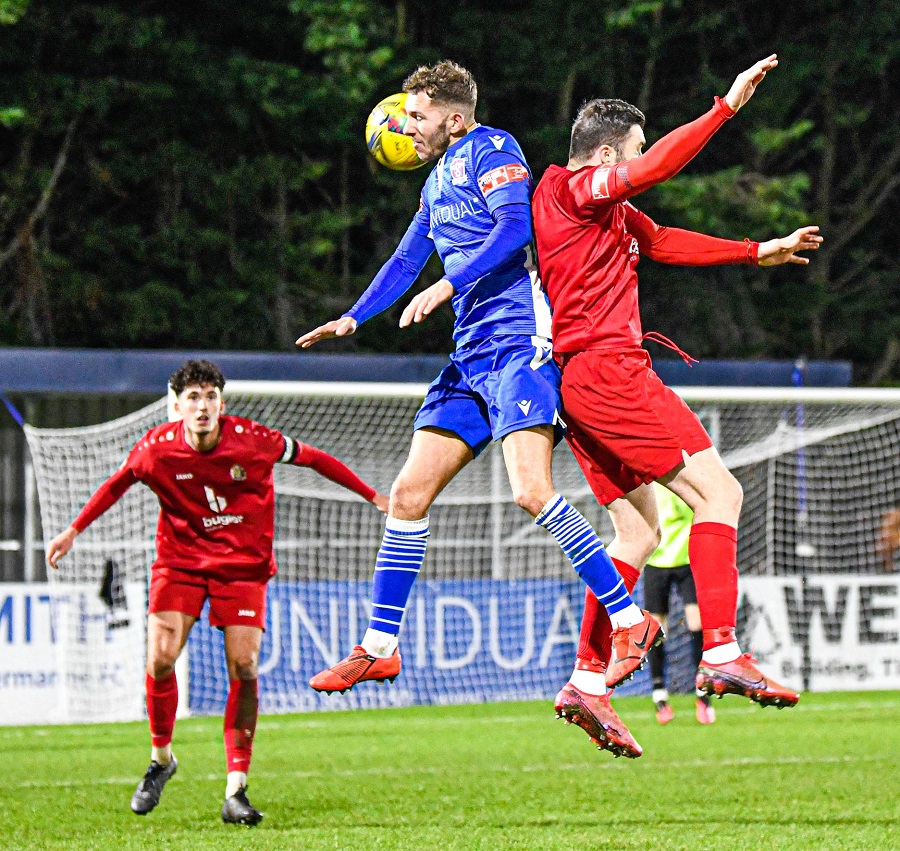 Then a big talking point occurred just before the half hour. Borough’s Lewis Cole went in for a challenge on Mat Liddiard and got it all wrong and was in many spectator’s opinion a correct decision when the referee sent him off, accept the Borough contingent that is? It did look a bad tackle which thankfully the skipper got up from. Harrow were down to 10 with an hour to play. However this seemed to work in the visiting teams favour as they organised a tighter defence and were to rely on the counter attack! From one of these counter attacks they earnt themselves what looked a very harshly awarded free kick on the edge of the box? 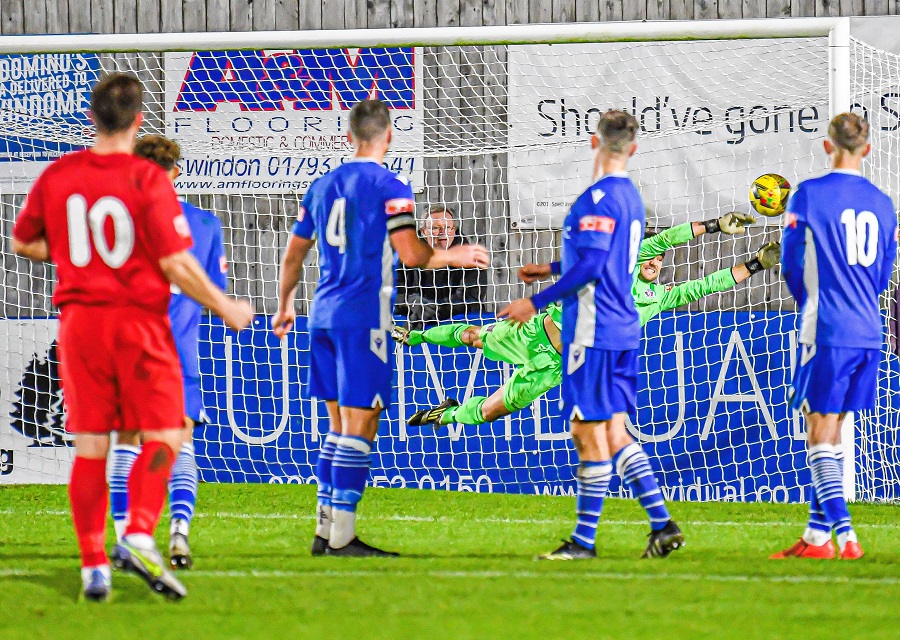 Boro’s GEORGE MOORE stepped up and sent the ball over the top of the wall and towards the unguarded side of the home goal. Keeper Martin Horsell dived desperately across and in an attempt to push the ball away only helped into the corner of the goal for a 3-1 lead. Marine had it all to do in the second period but against ten men knew they had the chance if they could stretch the packed Boro defence and increase the tempo and put pressure on them. 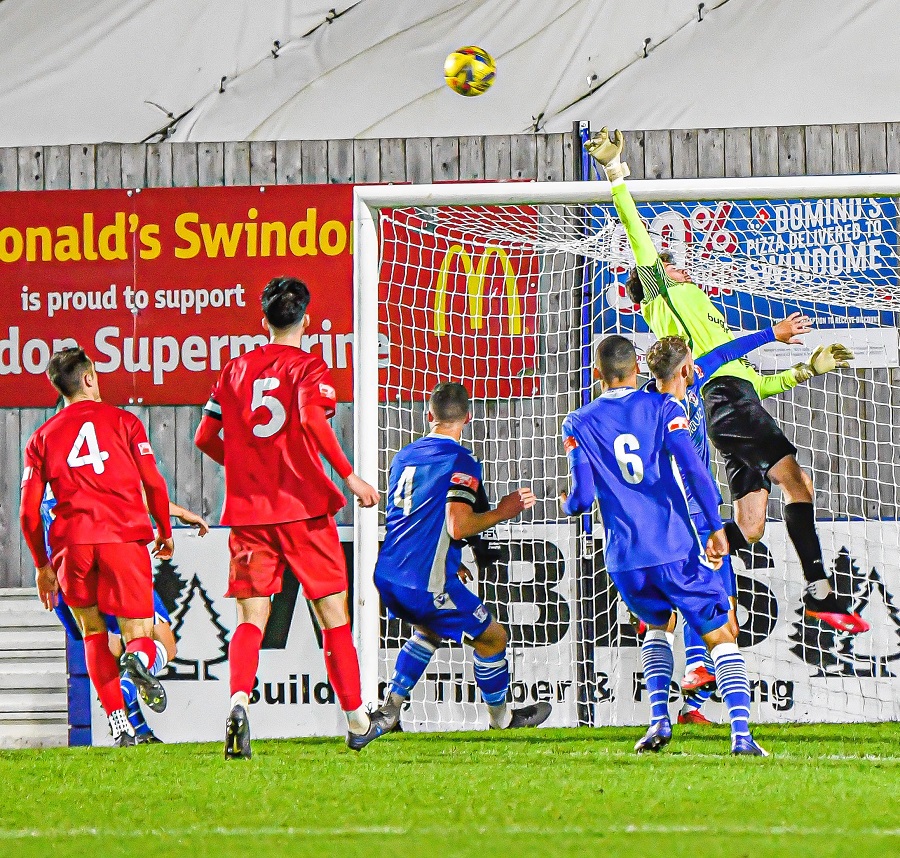 That is exactly how it went early into the second half with Harry Williams being brought down in the box on 49 minutes but his appeal was waved away by the referee. But when Kieran Phillips nicked the ball from defender Ben Tricker who was also brought down on 52 minutes. On this occasion the ball in there was no doubt about a push in the back and Marine had a spot kick and Tricker was shown a yellow card. MICHAEL HOPKINS (top photo) stepped up and converted the ball in style to make it 3-2 and game on! 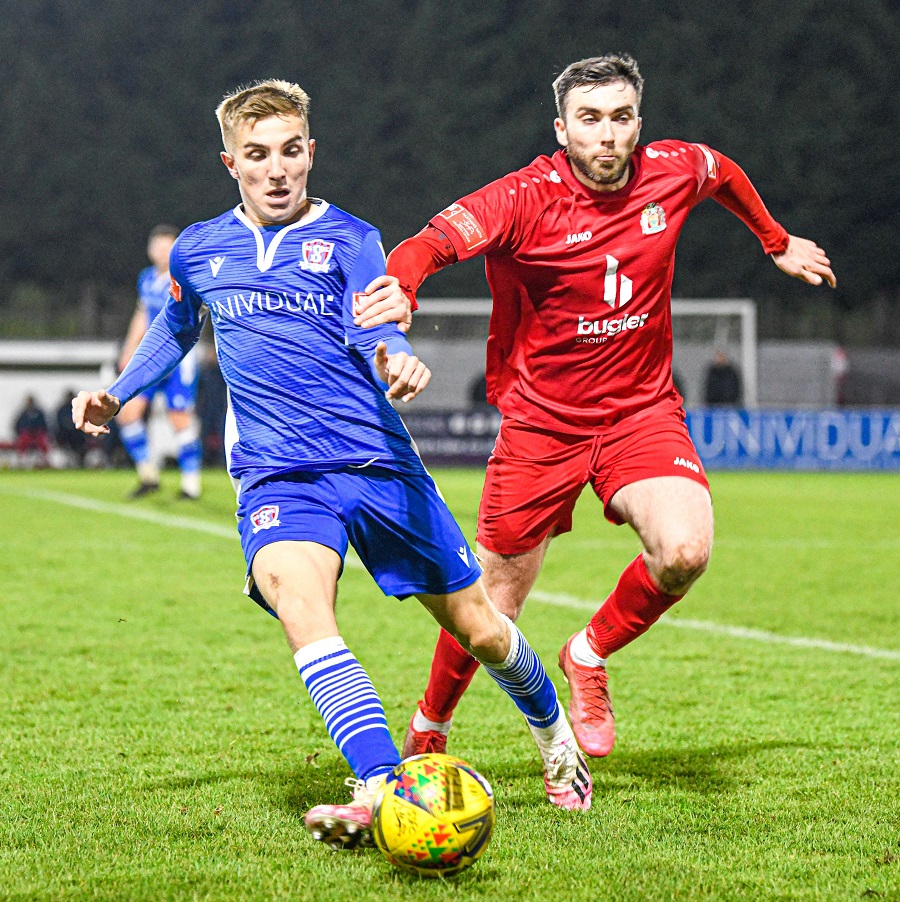 Brad Hooper put in a hefty tackle on Frank Keita on 54 minutes and was shown yellow and Boro’ seemed to raise their game a little making a few attacks of their own. From one of these attacks on 62 minutes, the ball was blasted at goal and from point blank range Tyrone Duffus blocked the ball but was seen by the referee as having a raised arm and another spot kick was awarded, this time to the visitors. JAMES EWINGTON stepped up slam the ball into the top corner to give keeper Martin Horsell no chance and to convert his second goal and it was back to square one as Boro led 4-2. 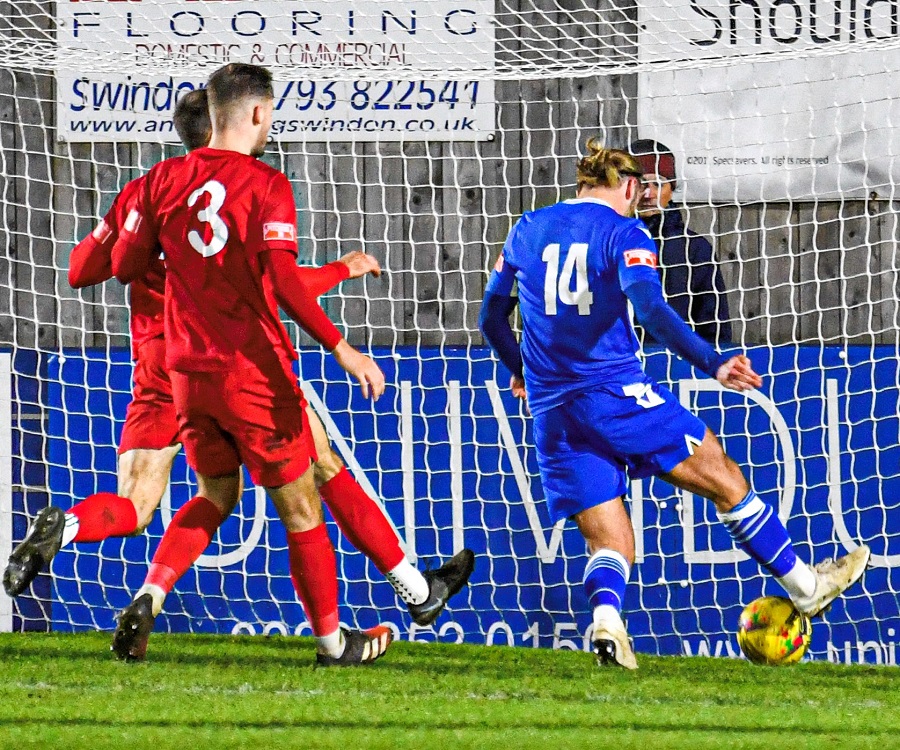 Changes were made in the last twenty minutes for both sides. Marine going on the attack by bringing on Conor McDonagh for young defender Zak Ford and Zack Kotwica for Harry Williams. Ryan Campbell, who literally ran non stop for the full 90 minutes, hit a powerful strike over the top with 15 minutes to go. Following that we had the ball in the net when Conor McDonagh tapped the ball home from just a yard out but was denied by a linesman flag. It looked a very tight call, in a very crowded goal area, and a decision that would ultimately end any hopes for Marine. Phillips had a late turn and shot into the side netting but in truth Marine had never looked like winning this one.

An exciting game full of incident and controversy, great for the neutral but not so great for the home side whose poor run of results has them looking firmly over their shoulder at the relegation places with just one league win in 14 matches. Things need to improve and soon as if the results carry on in the same way we will find ourselves in the bottom four and fear of relegation!

Player of the match: Ryan Campbell