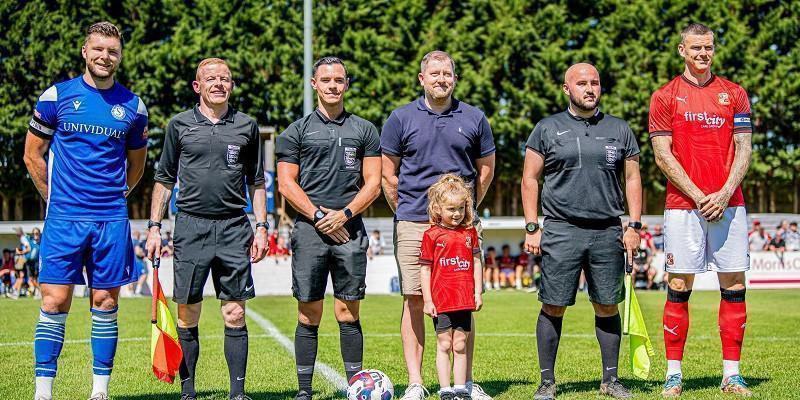 MARINE WIN OVER THE ROBINS

Marine continued their pre-season campaign with an eagerly anticipated visit from local rivals and friends Swindon Town. Town under new boss Scott Lindsey fielded a strong side with key players Harry McKirdy, Louis Reed and Jonny Williams all playing a part in the match. Marine for their part were without Brad Hooper and Conor McDonagh away on holiday but did a home start for new signings Sam Turl and James Harding. 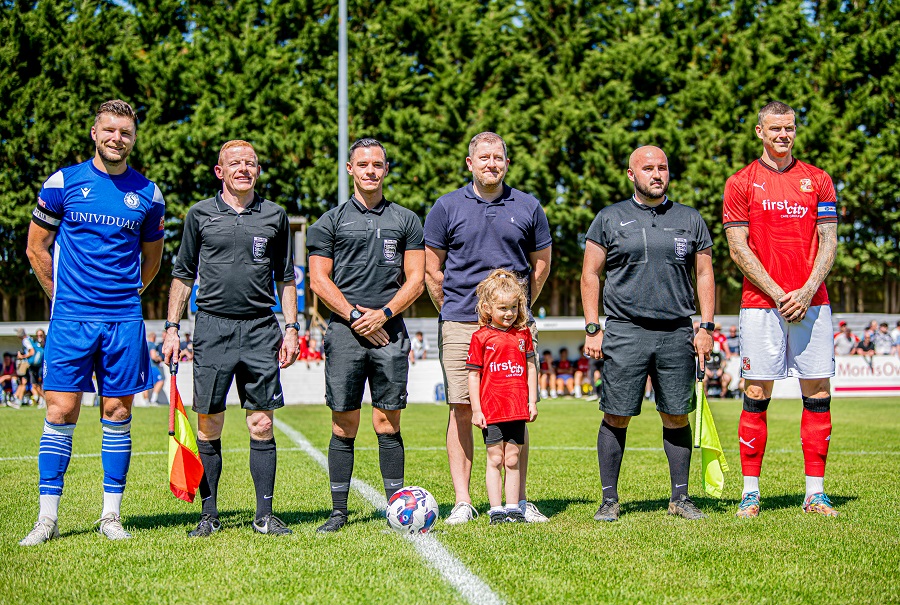 In blisteringly hot conditions the early pace was set by the visitors with Harry McKirdy testing new keeper Connor Johns handling and then firing one over on eight minutes when well placed. Harry Williams had an effort deflected wide from range before Town spurned a good chance to go ahead when Ben Gladwin fed in Louis Reed but his shot was wide of the upright. 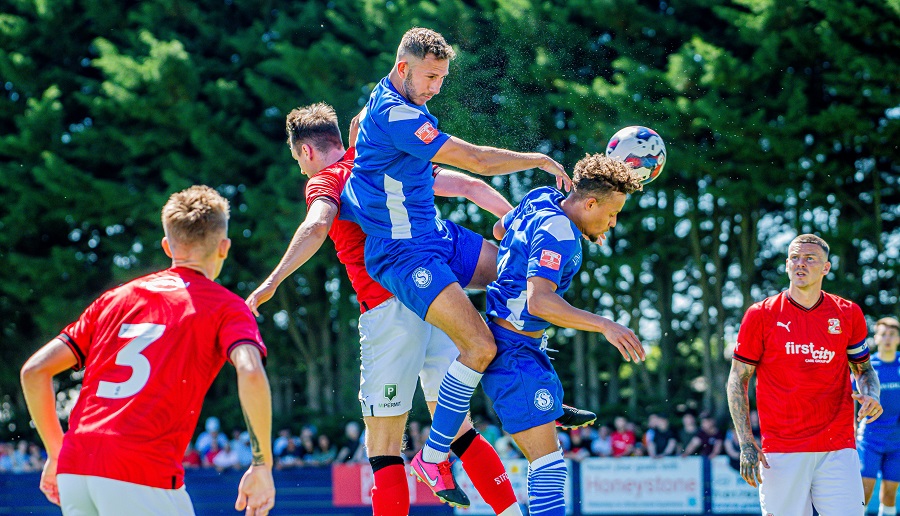 Reed followed this up with an effort from a free kick but once again was wide of the mark. The early periods saw the Robins dominating possession but Marine looked solid defensively. The key incident of the half came on twenty-five minutes when Harry Parsons put McKirdy through on goal only to see him brought down outside the box by Connor Johns. A yellow card was brandished but once again the free kick, this time from Gladwin, was wide of the mark once more. 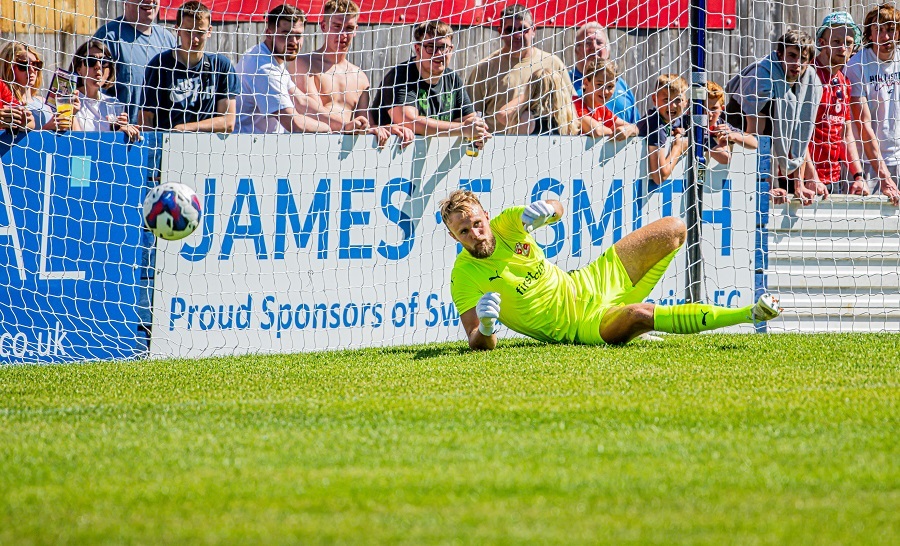 Ryan Campbell was looking sharp on the break and he nearly put in Harding but he couldn’t quite get on the end of it. But Town never heeded the warning and on 38 minutes the deadlock was broken. Campbell’s ; long range effort was spilt by Town keeper Lewis Ward and Henry Spalding ; picked up the scraps to play in JAMES HARDING who finished at the near post with a poachers instinct and his first goal for the club. Both Louis Reed and Harry McKirdy again were wide of the target late on and Marine had completed a dream half. 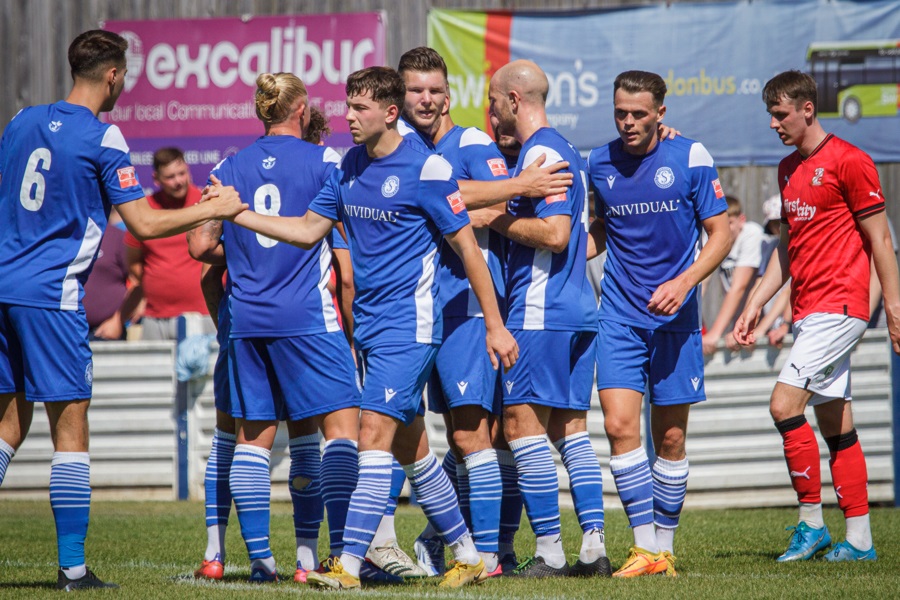 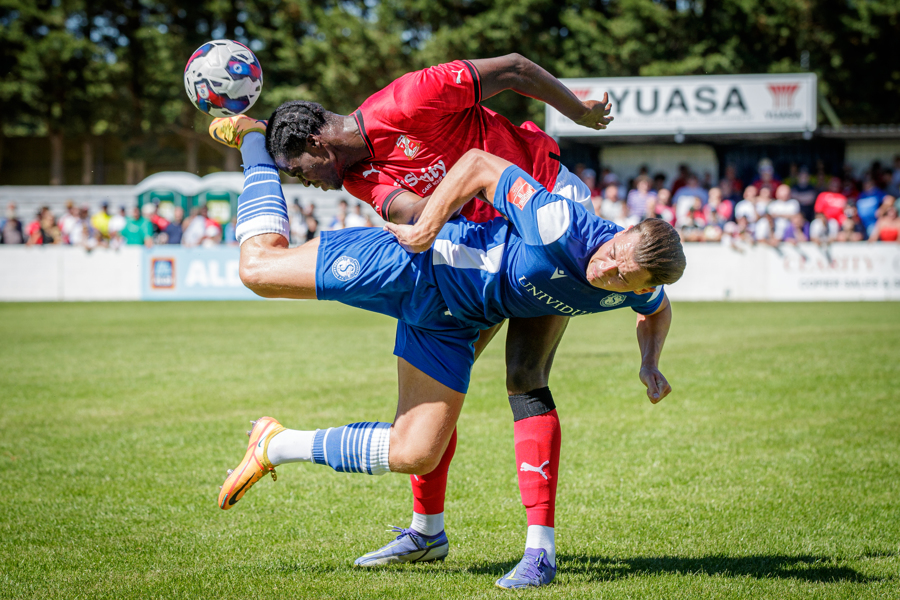 The second period saw a number of changes for the visitors and just four minutes in an equaliser seemed certain from George Cowmeadow’s powerful effort but Connor Johns was equal to his effort when he sprung into action with cat like reflexes to somehow tip the effort over the top, a great save from Marine’s new number one. 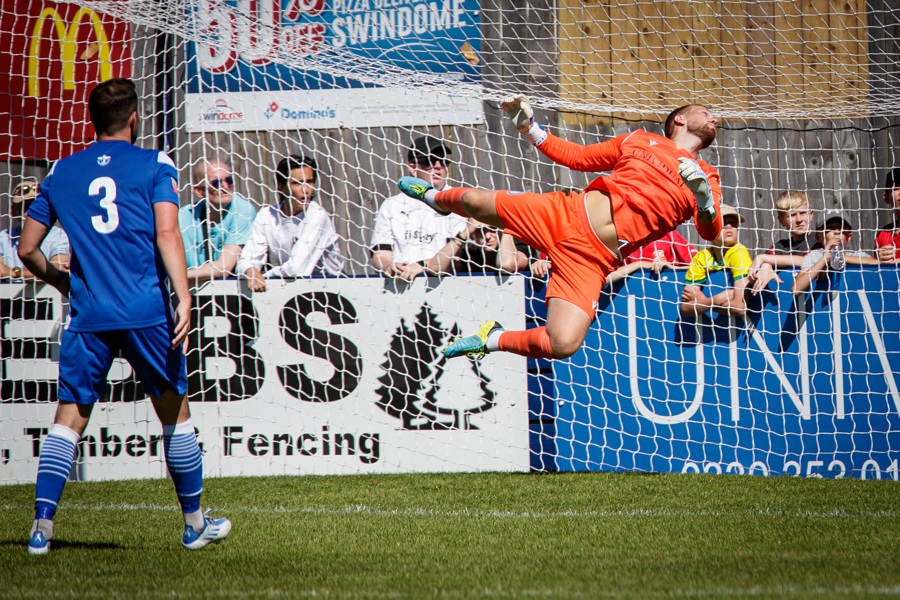 Marine themselves made some change with Leon Morrison, Zack Kotwica and Jack Stanley entering the play for George Dowling, Sam Turl and James Harding. Shortly afterwards, again Marine were indebted to keeper Connor Johns as he denied new Town forward Oscar Massey in a one on one just after the hour. 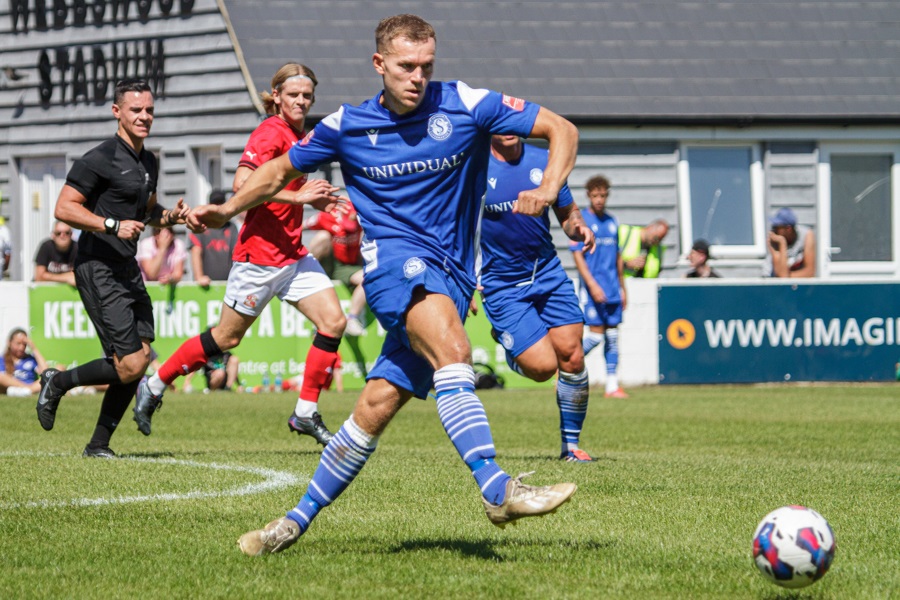 Marine still looking solid at the back despite the alterations gave their two recent trialists another run out for the last twenty minutes with the hardworking Lewis Hall and Tom Sharpe making way. Then a bit of luck that you need if you are going to win games like this arrived. Tyrese Shade and Ricky Aguiar combined and the latter’s shot from outside the box struck the post and bounced to safety. 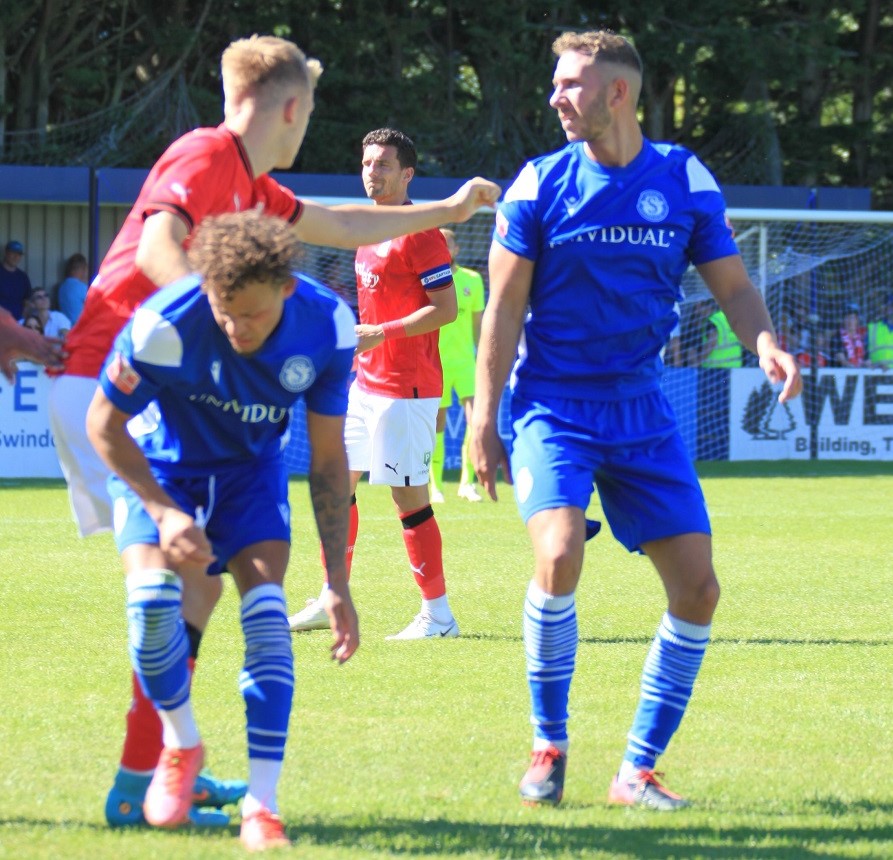 Marine capitalised on their good fortune with a great team move that ended with our second goal. Ryan Campbell outpaced Town substitute Hart setting up one of the trialists who finished well from close in on eighty-five minutes to put the seal on an excellent team performance. Tom Golledge came on in the last five minutes end for Harry Williams but the League Two visitors could make no impact on the Marine defence. 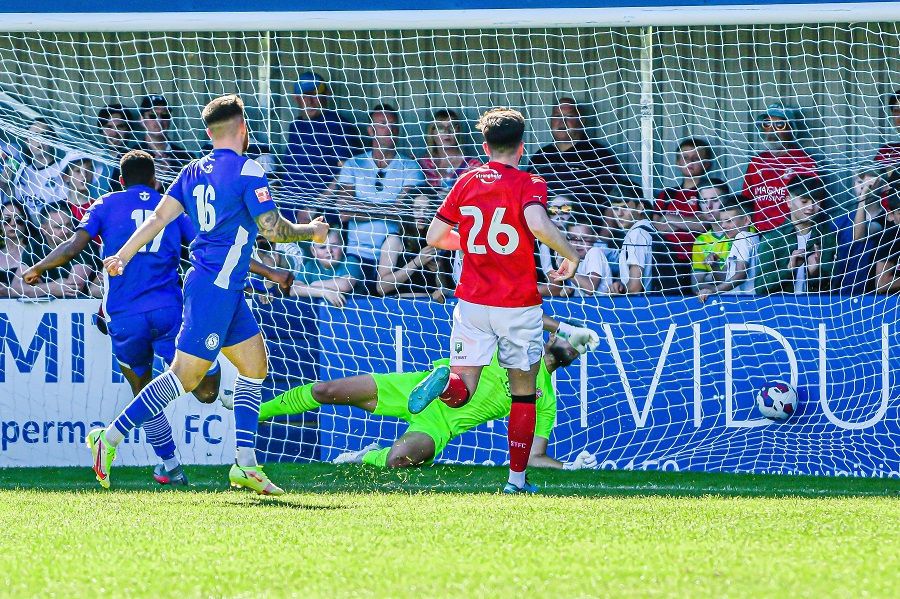 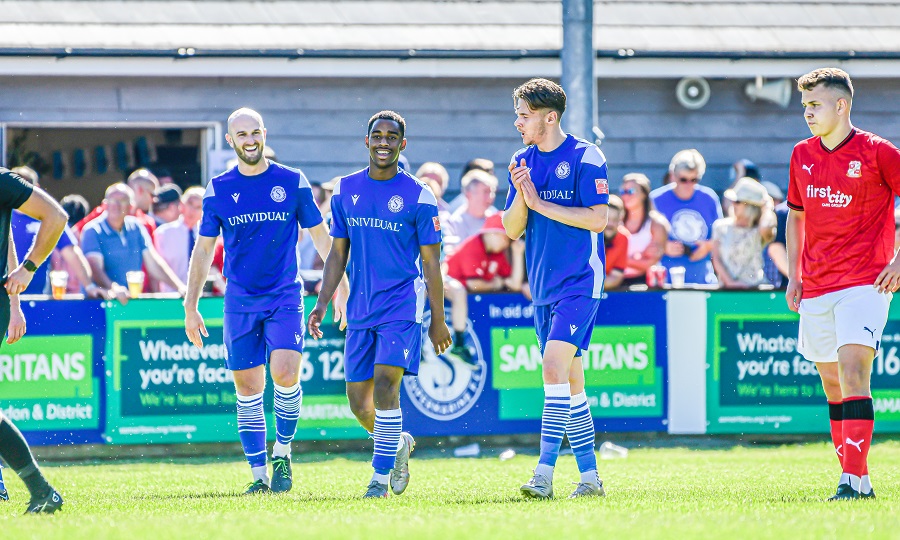 A very professional performance for the Marine squad despite some absences against a full time professional outfit in front of a large crowd of over 1400 spectators set the team up well for the season ahead. The squad looks stronger and the team ethic more pronounced, the side can be rightly proud of their efforts in a win that will be remembered for a while. 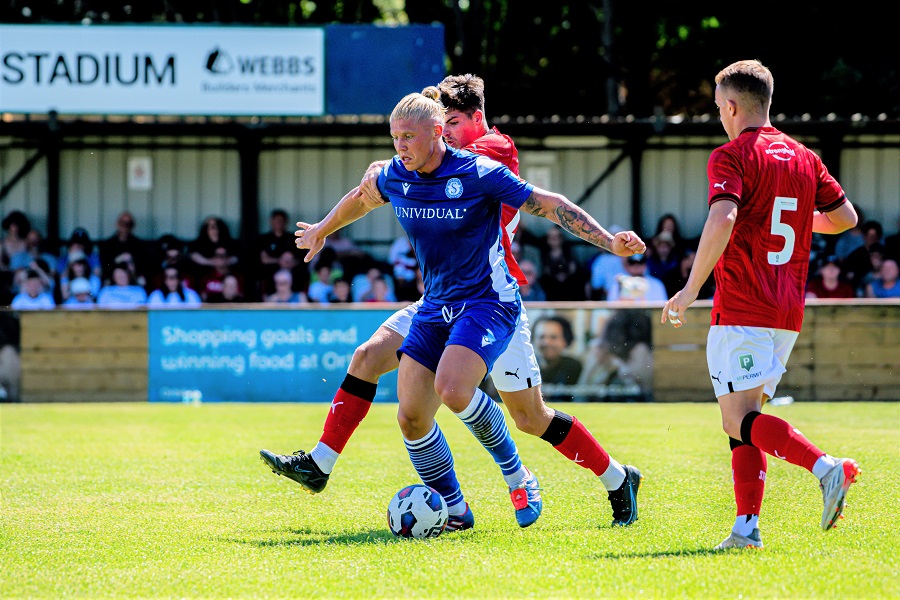