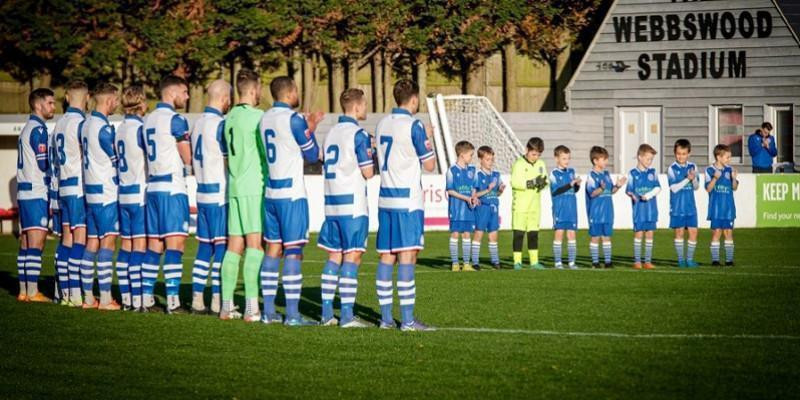 Swindon Supermarine were back in home league action on Saturday afternoon with manager Lee Spalding back at the helm after missing last weekend with illness. Two changes were made as George Dowling replaced Brad Hooper and new loan keeper from Gloucester City, Liam Armstrong, made his debut between the sticks in place of Josh Gould. 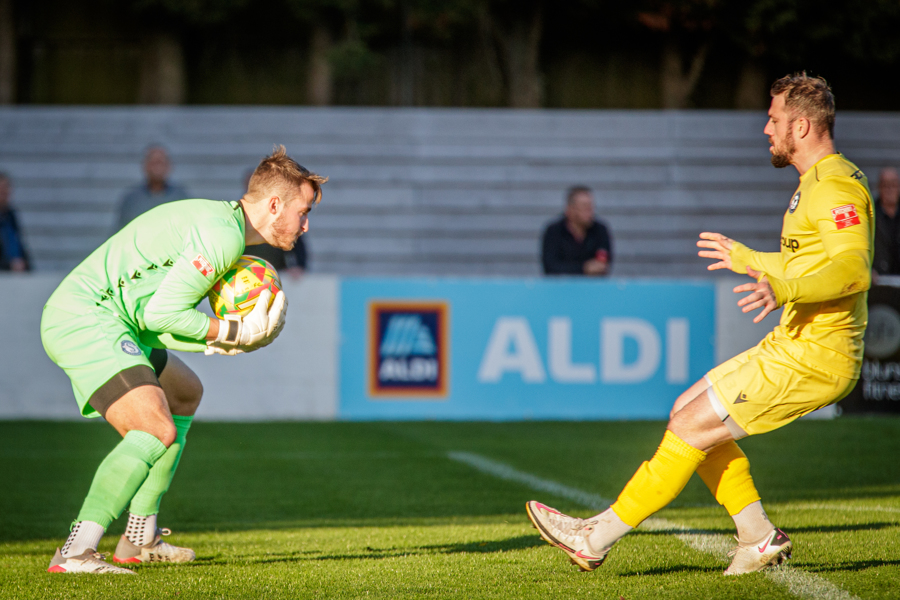 After a well-respected minutes silence for Remembrance Day and a minute’s applause for Glenys Rideout after her sad passing the game got underway slowly and on seven minutes came to a pause once more as the teams paid their respects to Alex Fletcher of Bath City who had suffered a serious injury in midweek. Our thoughts are with him and his family at this difficult time. 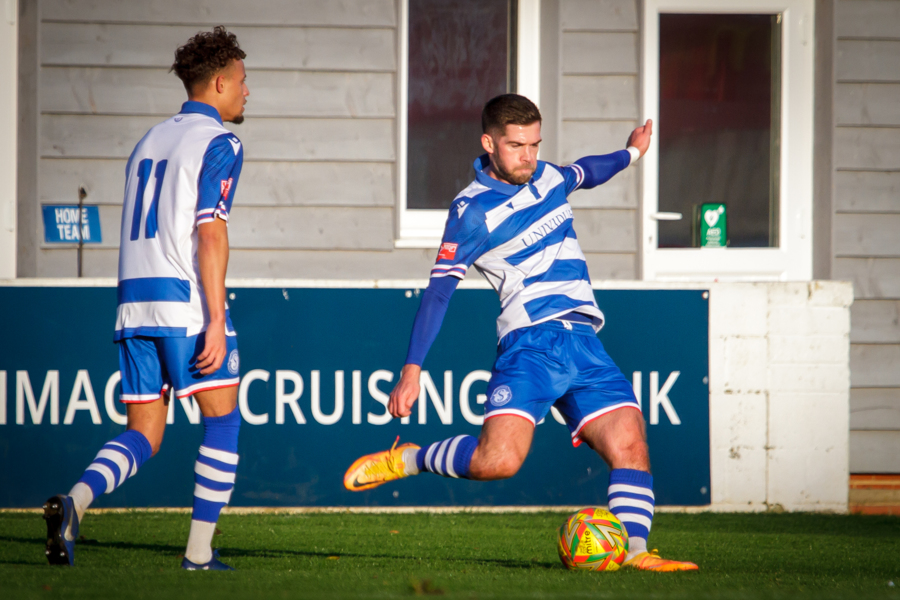 With players from both sides having recently swapped clubs in the summer this was always going to be a lively and tight affair. After an early midfield scrap the first chance fell after a Joe Tumelty free kick which was spilt by Martin Horsell in the visiting goal but despite the fumble Yate managed to clear the danger. 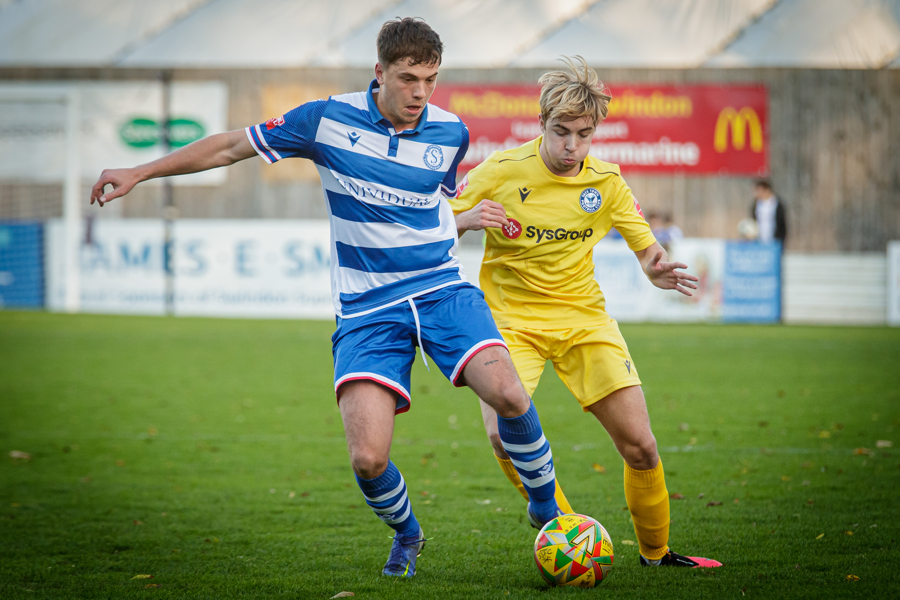 Marine were looking more comfortable in possession and Henry Spalding had an effort close in well saved by Martin Horsell after twenty minutes. Ben McLean was the first into the referee’s book for a foul soon after and despite being on top Marine were struggling to find the killer pass in a tight first half. Tumelty had an effort from an acute angle saved by Horsell with time running out in the half before the turning point of the game came on forty-three minutes. 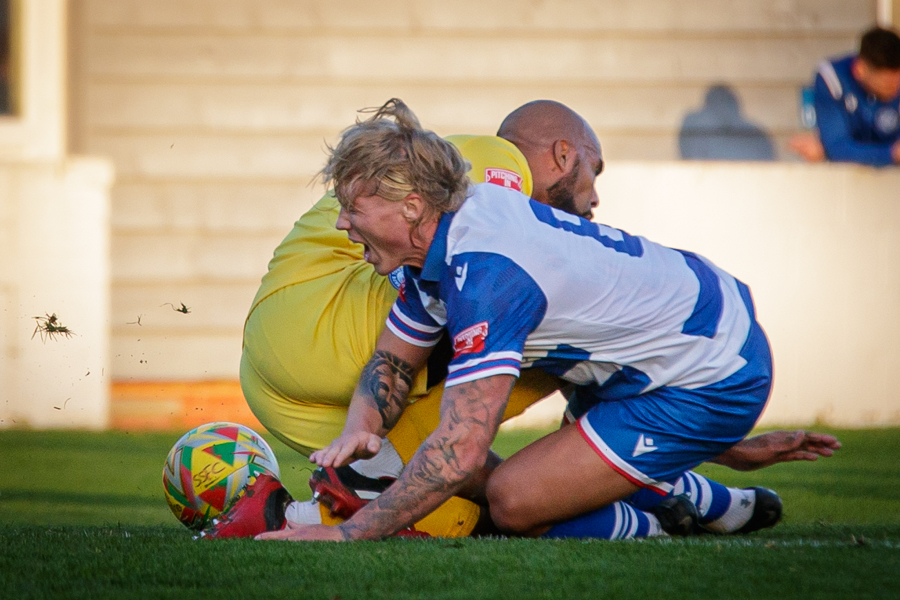 A late challenge on George Dowling by Darren Mullings saw the Bluebells midfielder dismissed and this would raise Marine’s hope. With this in mind Conor McDonagh replaced Dowling at the break as Marine opted for the extra man up top to break the deadlock. 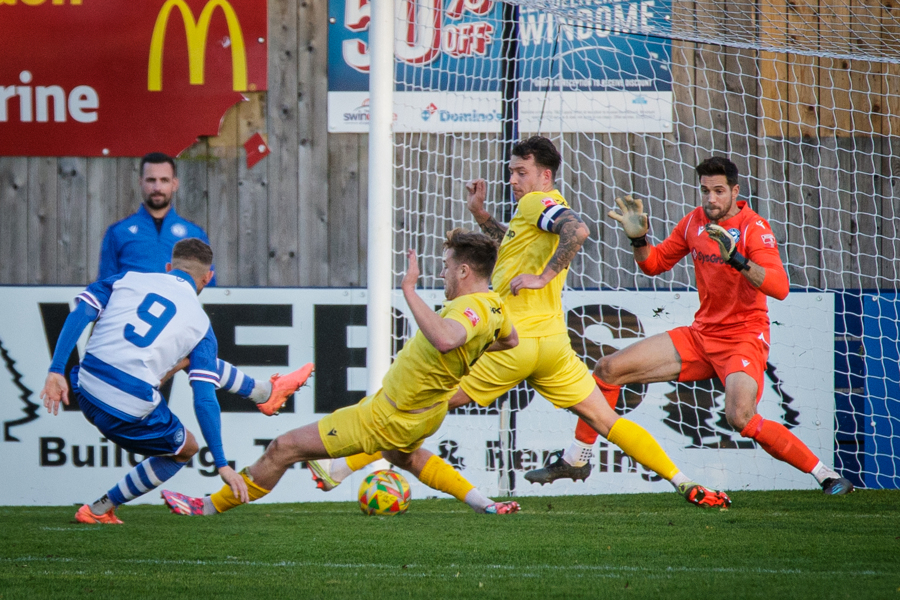 With Yate digging deep to defence and apart from an effort poked wide by Harry Williams after a good run by Tyrone Duffus the Yate backline was holding strong after an hour. Harry Williams was looking sharp however and forced another good stop from Martin Horsell on sixty-five minutes. But you could sense the goal was coming and with seventy-minutes on the clock the goal finally came. 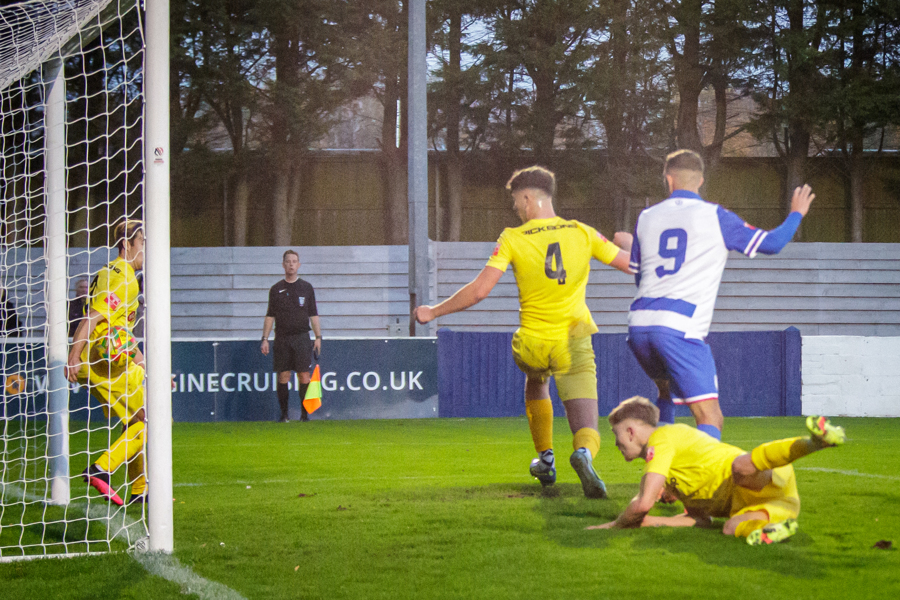 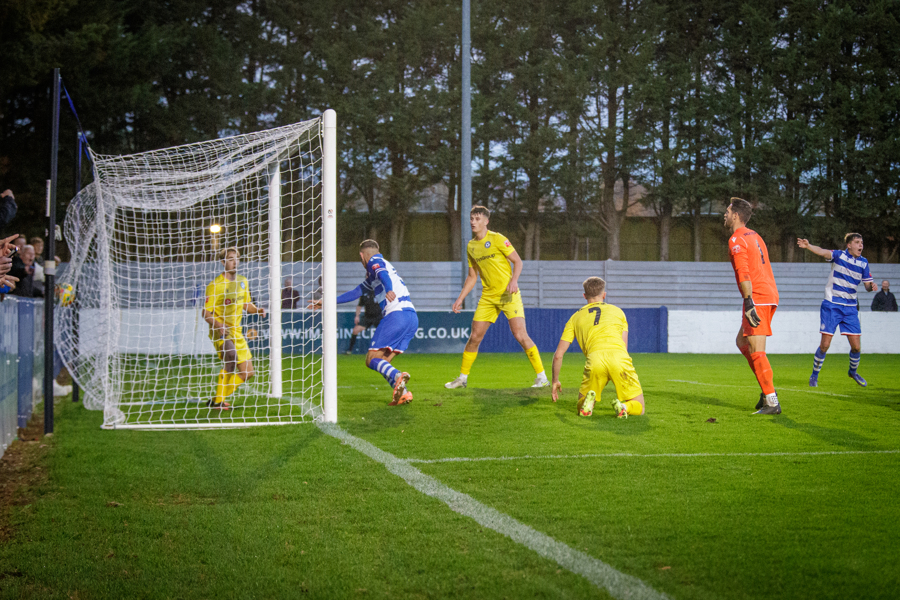 And who else but Harry Williams could be the man to break the deadlock. After pressure down the left a throw in from Ryan Campbell put the ball into the box and after it was spilled by Horsell in the Yate goal the ball fell to Henry Spalding. His strike appeared to be handled off the line by a Yate defender Barnaby Soady but rebounded back to fall to HARRY WIILIAMS who smashed it home for his 20th goal of a remarkable season. 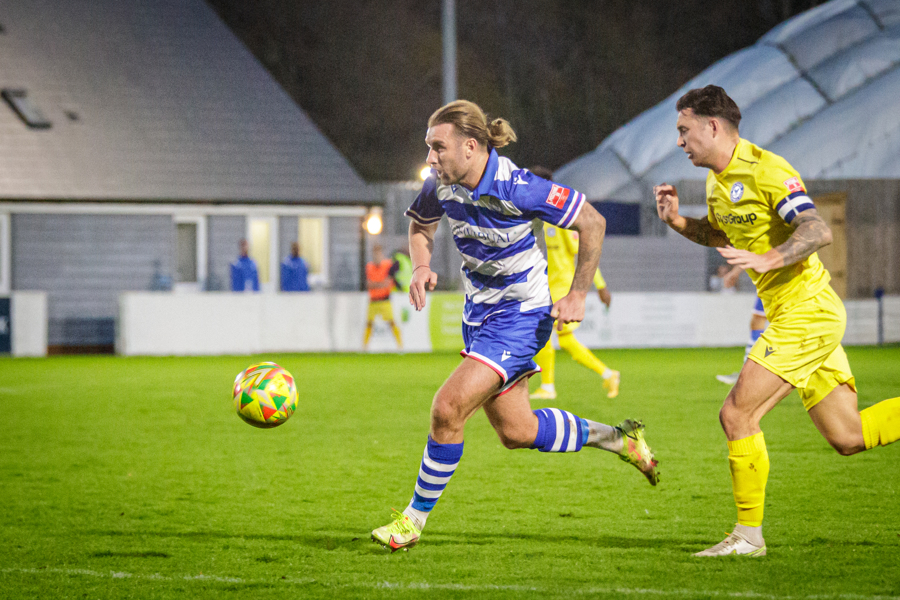 Tyrone Duffus was denied again by Horsell with a header soon after before Marine opted for a double change with ten minutes left as Brad Hooper and Zack Kotwica entered the fray in place of Joe Tumelty and Ryan Campbell. The win was sealed when Williams headed the ball into the path of CONOR McDONAGH on 85 minutes and as he was faced with just Horsell to beat he slid the ball comfortably past him for a 2-0 score line. 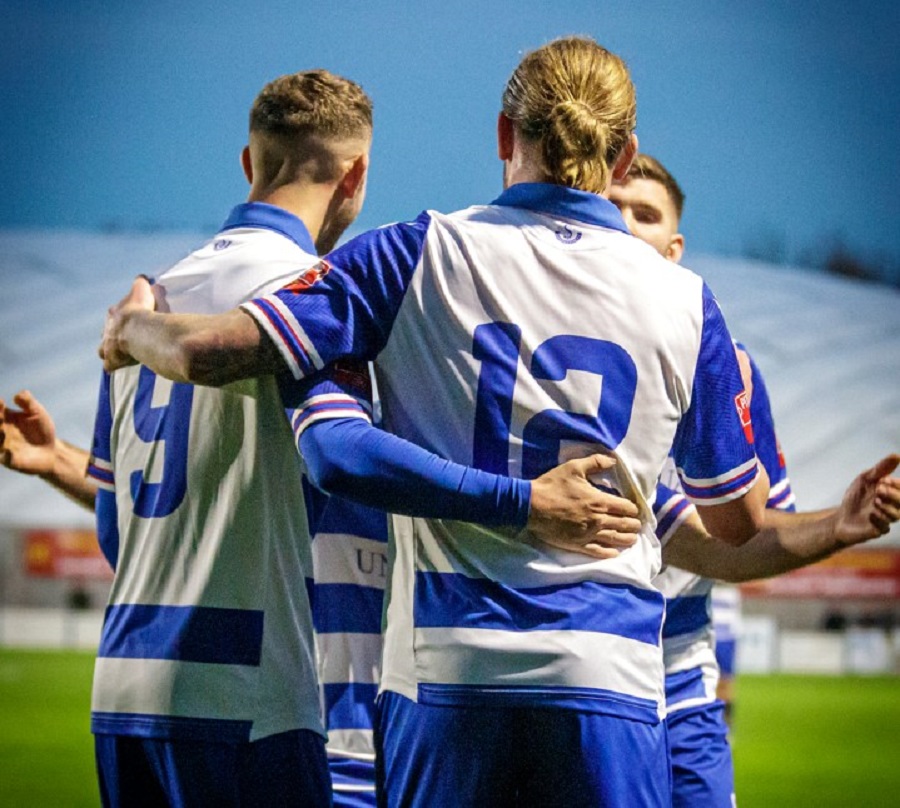 Overall, a victory never really in doubt as Marine looked the better side on the day eventually breaking down a resolute backline and moving back into fifth place in the table and a well-deserved playoff spot at present. Next up – Wiltshire Premier Shield action away on Tuesday night at Bemerton Heath Harlequins and then next Saturday a massive FA Trophy tie at home to National South Dartford. See you there! 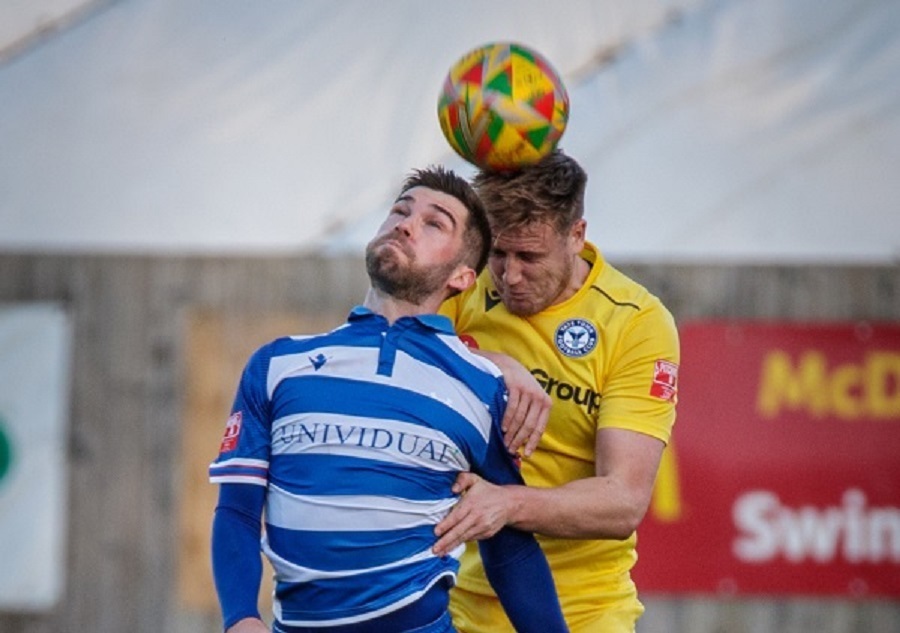 Fans star man Joe Tumelty whose determination and range of passing meant he returned to haunt his former employers.