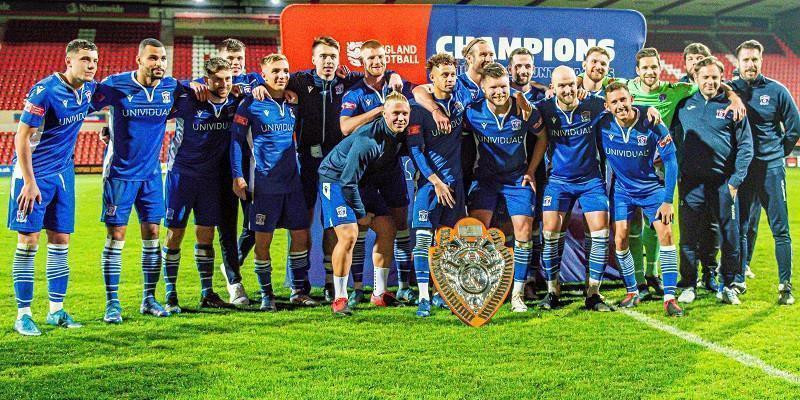 Swindon Supermarine finished their season on Tuesday night with a trip to the County Ground, home of Swindon Town Football Club to take on Corsham Town of the Hellenic League in the Wiltshire Premier Shield Final. Manager Lee Spalding opted for a double change from the final league game of the season, with Conor McDonagh returning up top and George Dowling in midfield with Harry Williams and Brad Hooper starting from the bench. 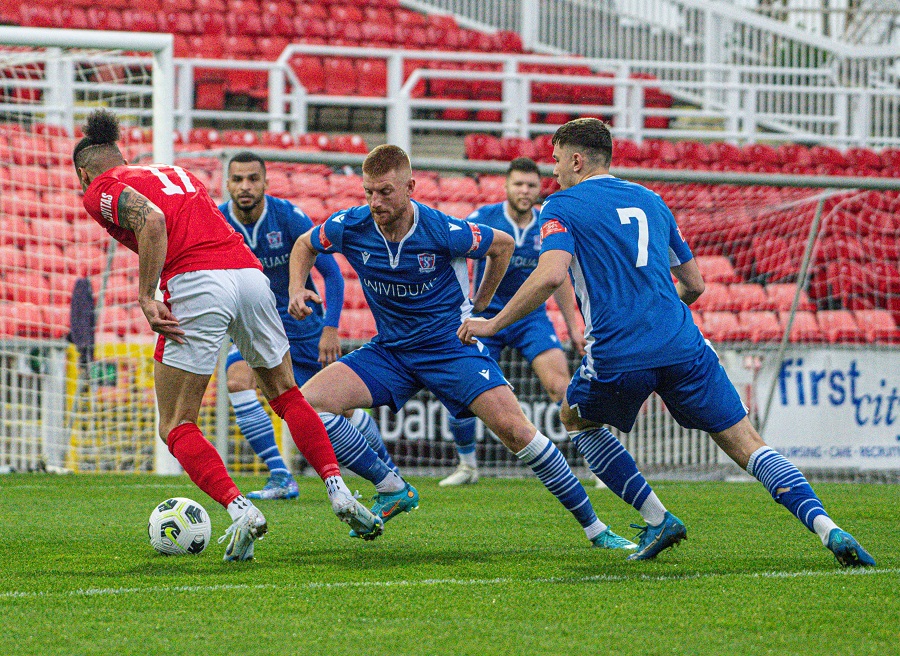 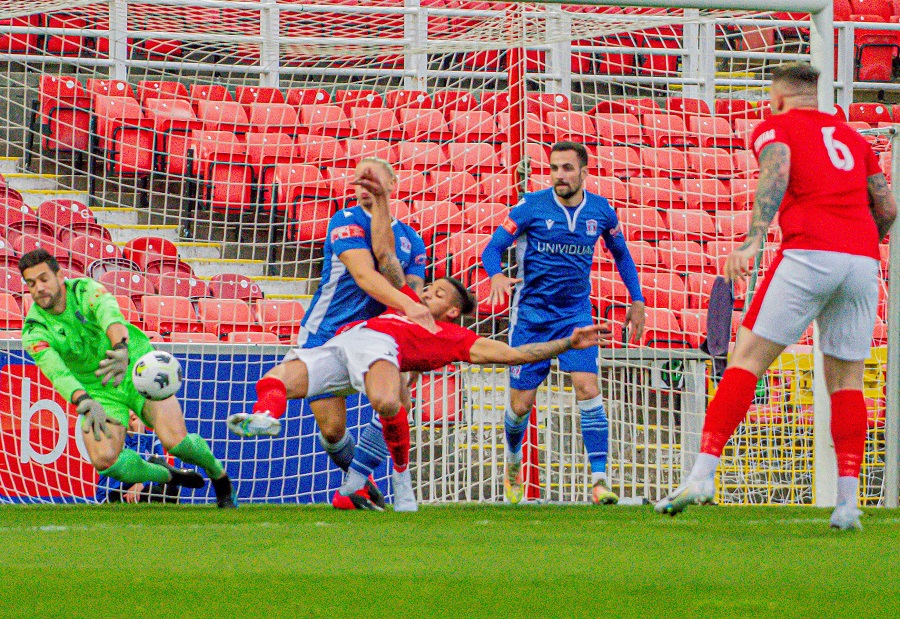 It was a nervy start from both sides before Corsham’s Gary Higdon had the first big chance for the Quarrymen putting his shot wide after nine minutes. With some competitive and committed challenges both sides were showing they wanted this win. Kieran Phillips put keeper Brown under pressure on nineteen minutes as he juggled the ball on the goal line but held on before Marine started to to play some neat and controlled football. 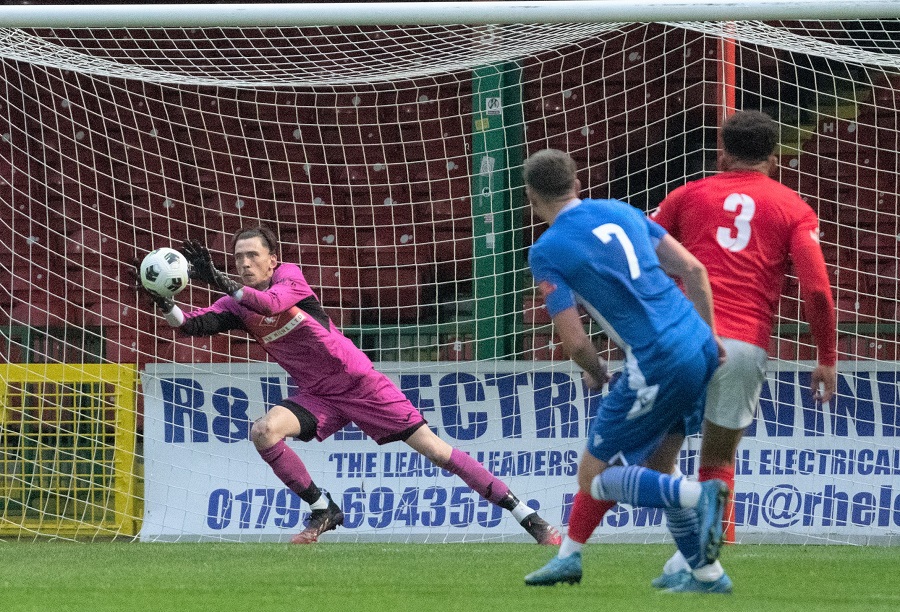 Conor McDonagh came close on twenty-one minutes, putting the ball over the top of the bar but with their football now flowing it was HENRY SPALDING who opened the scoring a minute later. A low strike from outside the box squirmed away from the Corsham keeper Rob Brown and over the line for his thirtieth career goal for the club. Soon afterwards Corsham’s Matt Jenkins broke through forcing Marine keeper Martin Horsell into a save but the flag was then raised for offside. 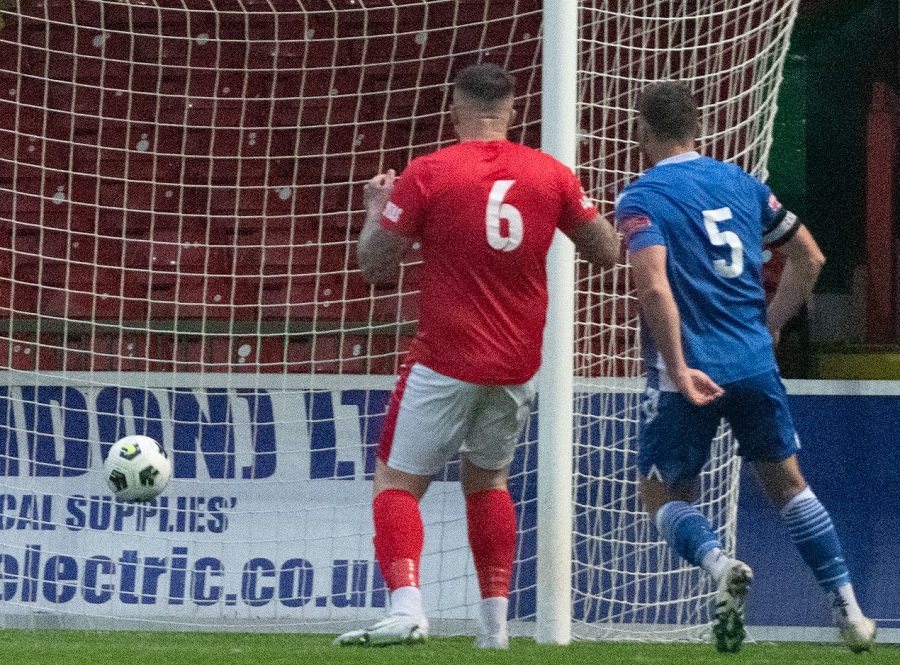 Marine had a stroke of fortune on the half hour mark. Matt Britton’s shot was palmed away by Brown to the feet of CONOR McDONAGH who put the ball back into the danger area for it to deflect in off a defender to make it 2-0 Marine who now seemed to be coasting. Nathan Davis was booked for Corsham and all seemed to be well heading into the half time break. But Corsham won a late corner deep into injury time and with a perfect execution unmarked GARY HIGDON powered in a perfect header and suddenly it was game on! 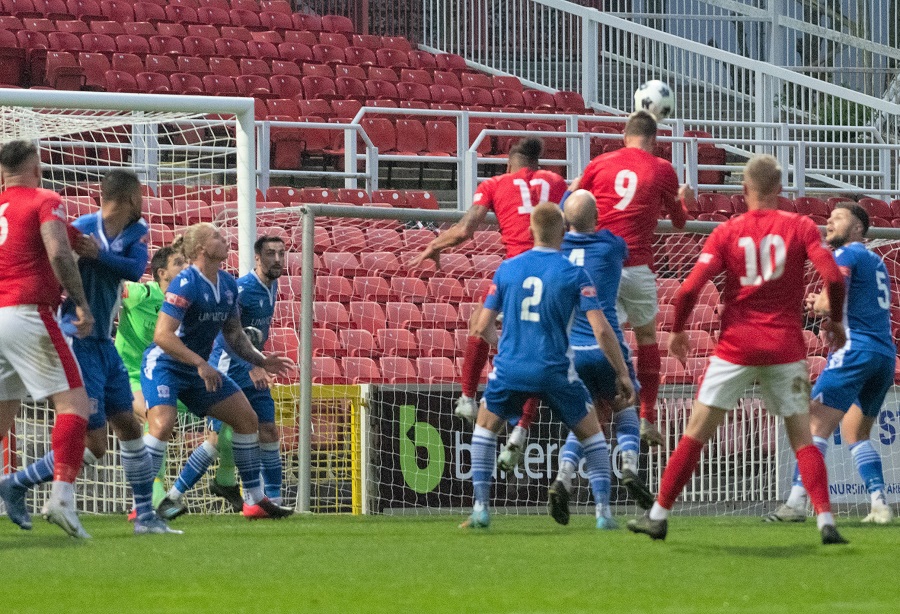 Corsham came out flying at the start of the second half buoyed by the late first half goal. Matt Jenkins should have levelled close in on forty-eight minutes but somehow fired high from in front of goal. Jamie Edge saw yellow for kicking out soon afterwards before Lewis Hall almost slipped in a dangerous area but recovered superbly to win a last ditch tackle and then almost set up Conor McDonagh for a quick break. It was no shock that the Corsham equaliser did arrive on fifty-nine minutes, and it was from another corner. The cross into the goalmouth wasn’t dealt with and Matt Jenkins headed goalward and the ball was flicked in by AYSA CORRICK just a few feet from the goal line to shock Marine, 2-2. 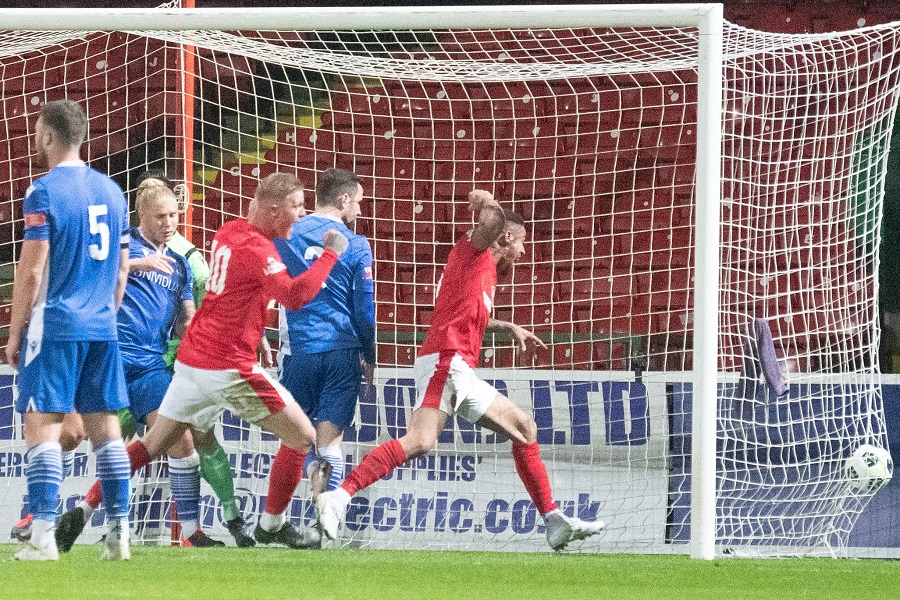 Once again it was down to the Marine management team to try and turn the game back around and just after the hour the introduction of Harry Williams and Brad Hooper for Conor McDonagh and George Dowling was designed to do just that. And boy did it work! Martin Horsell had to be sharp to keep out a low shot at his near post on sixty-seven minutes before the goal of the game arrived with twenty minutes to go. 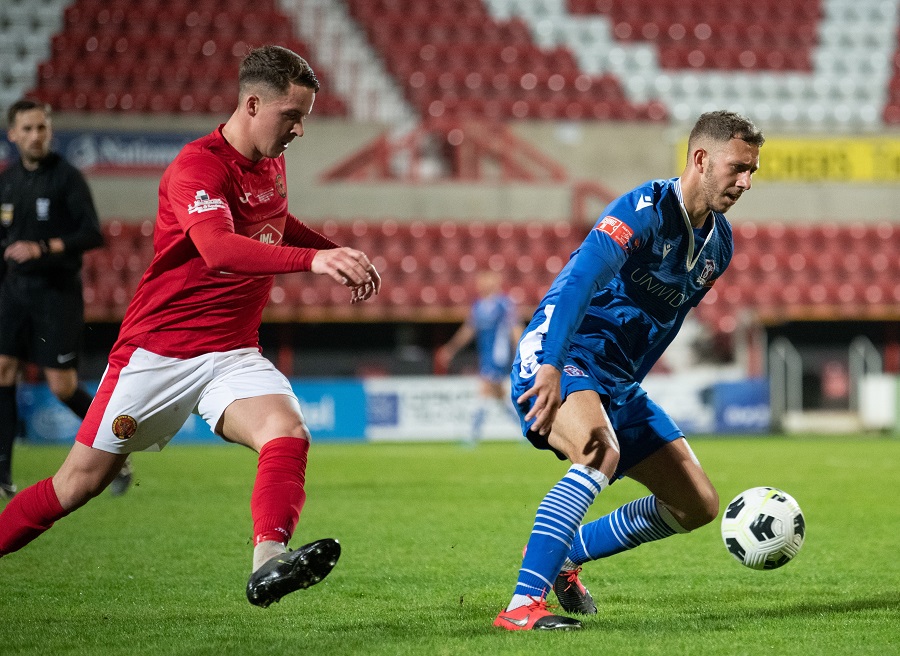 A superb break and cross in from Henry Spalding was headed home into the bottom corner by the diving HARRY WILLIAMS, probably his best goal of the season and his fifth in the competition to make it Marine 3 Corsham Town 2. Kieran Phillips then broke away and outpaced the chasing defenders as he attempted to seal the win but keeper Rob Brown saved well with the legs to deny the Bristol Rovers loanee. 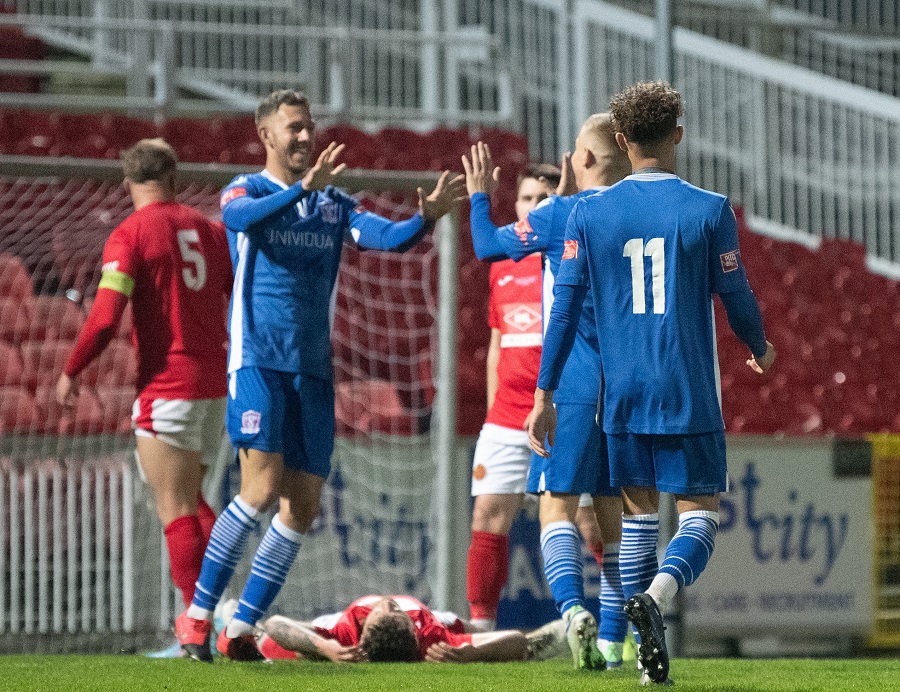 Marine appealed in vain for a penalty soon after when Williams appeared to be pushed over just inside the box before Corsham’s Aysa Corrick had to depart with time running out after picking up a nasty looking ankle injury causing the game to be delayed for significant period and Marine took full advantage of the extra time adding two further goals to the scoreline late on as fitness levels seemed to have told. 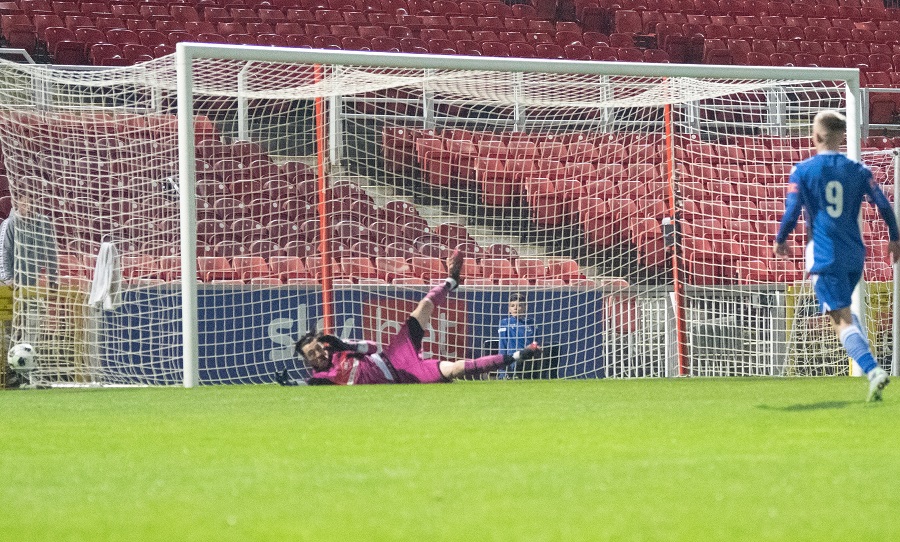 First KIERAN PHILLIPS sealed the deal with a minute left on the clock with a trademark neat finish close in for his 17th of the season after good work from Williams had set him up and then after Zack Kotwica had replaced Ryan Campbell, Kieran Phillips set up HENRY SPALDING in front of goal and he made it 5-2 after turning inside a defender and with a lovely low curling effort past the Brown in the Corsham goal. 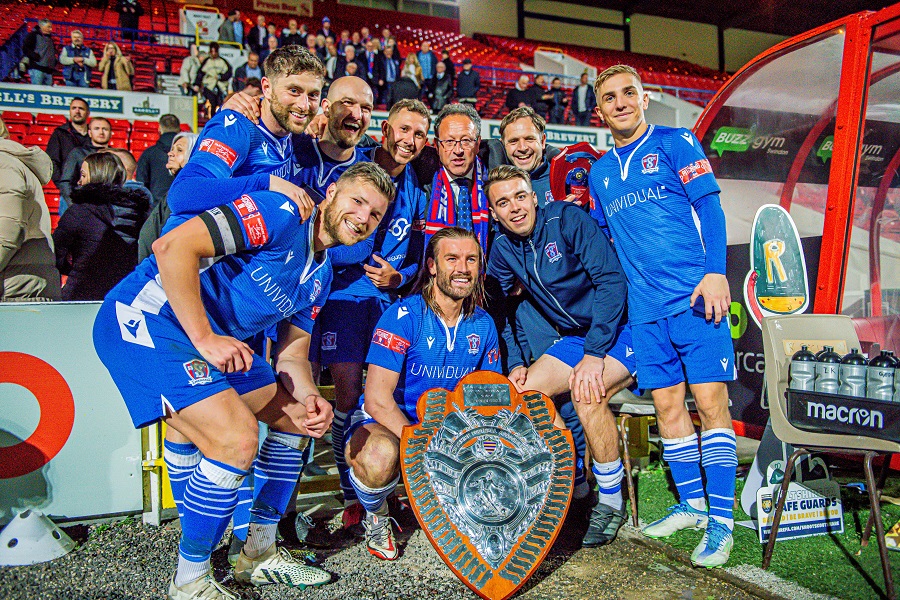 So Marine went home with the Wilts Premier Shield, a deserved win no doubt but a very spirited display from Corsham Town who can head home with their heads held high. A great end to the campaign for Marine who finished the season with five straight wins and eight wins in the last ten games and we look forward to a good 2022/23 season in August. 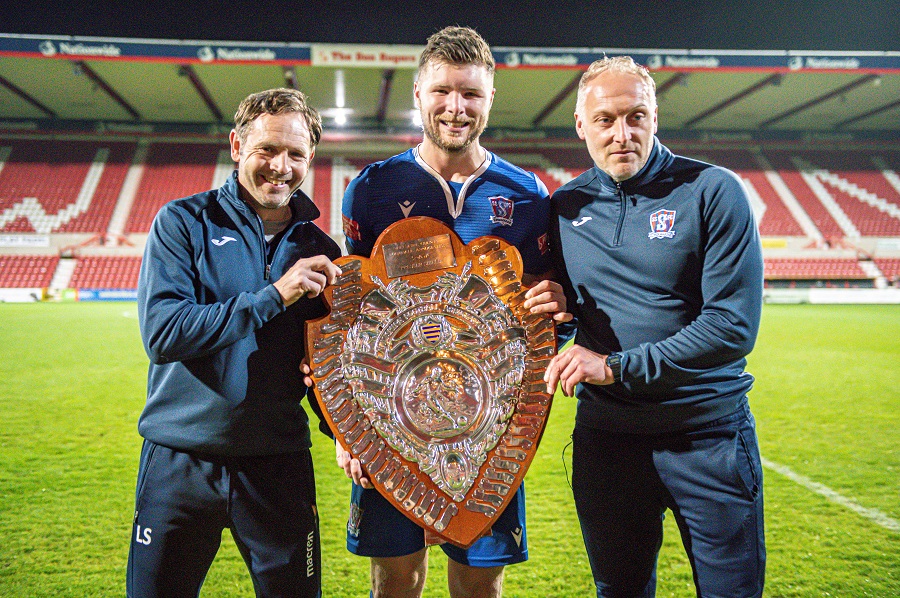