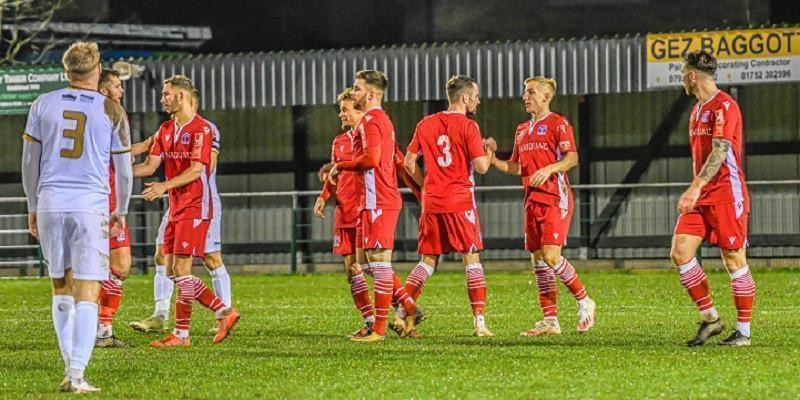 POINT ON THE ROAD AS MARINE STEADY THE SHIP

Swindon Supermarine were quickly back into action on Tuesday night when they made the long trip to Bolitho Park to take on Truro City looking to put the heavy defeat of the weekend behind them. Unsurprisingly manager Lee Spalding made four changes to the side bringing in Pierce Mitchell, Brad Hooper, Ryan Campbell and Harry Williams returned after his loan spell at Cirencester Town came to an end at the weekend. Dropping down to the bench were Tyrone Duffus, Michael Hopkins, Jamie Edge and Conor McDonagh with Chris Zebroski also on a strong bench after returning from illness. 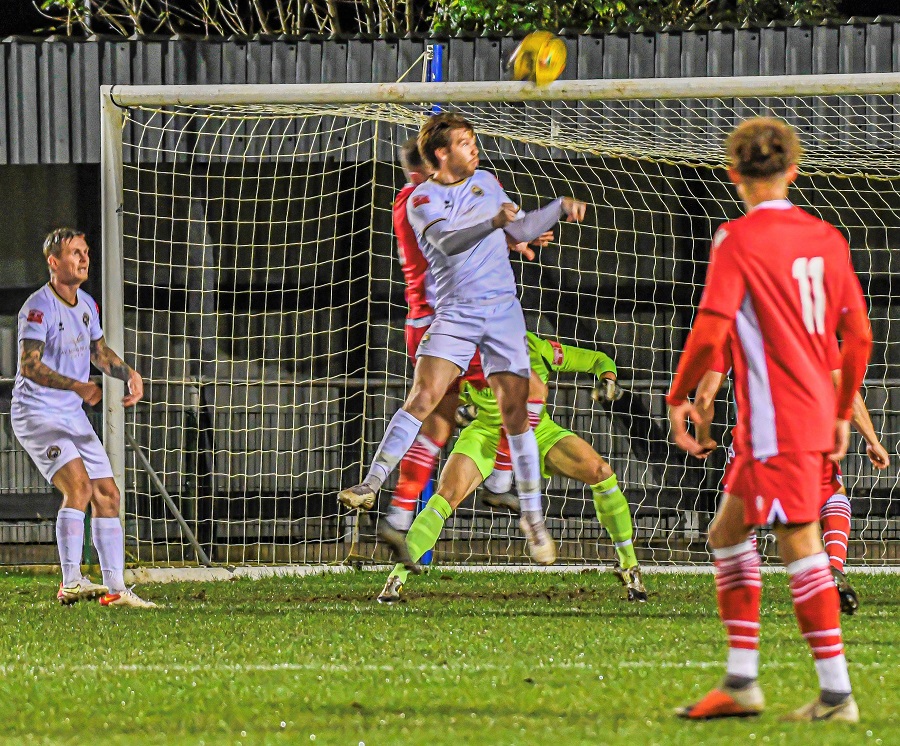 Marine in their change strip of red made a nightmare start as the hosts took the lead after just six minutes! A high ball into the box from Will Dean was headed home emphatically by TYLER HARVEY as he out jumped skipper Mat Liddiard and with keeper Martin Horsell seemingly leaving the ball for Liddiard to clear? Marine responded quickly with Kieran Phillips shooting just wide of the target in quick response. 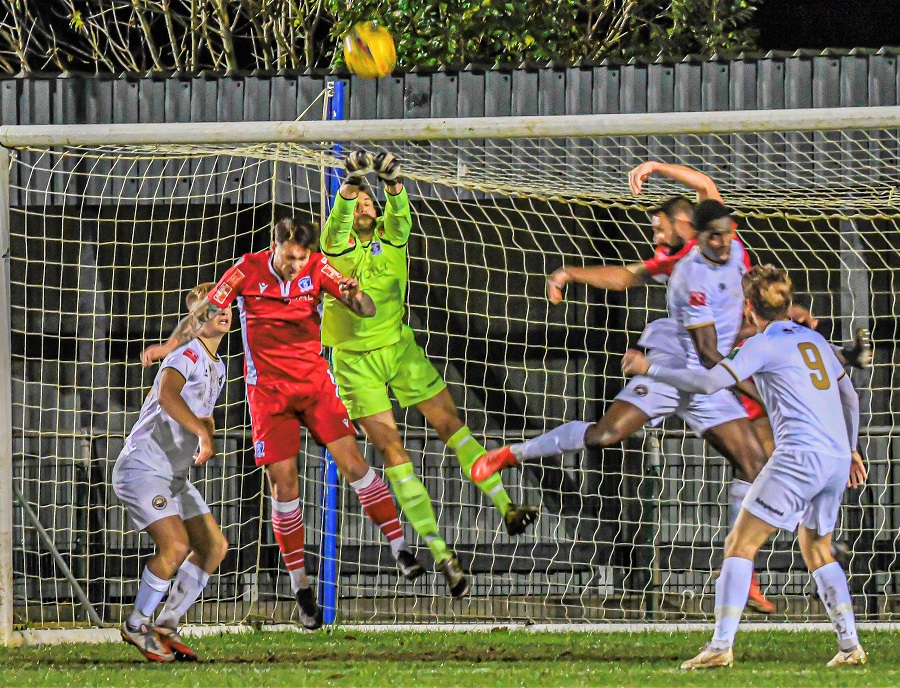 In an end to end early period, a header from Truro’s Ryan Brett was well claimed by Horsell and quickly after this the hard-working Harry Williams had an effort saved by the home keeper James Hamon. After Mat Liddiard lost the ball by the corner flag the ball was played back to Tyler Harvey who almost made it two for the home team as is curling shot struck the bar before being cleared. The game finally settled down after a frantic opening period. 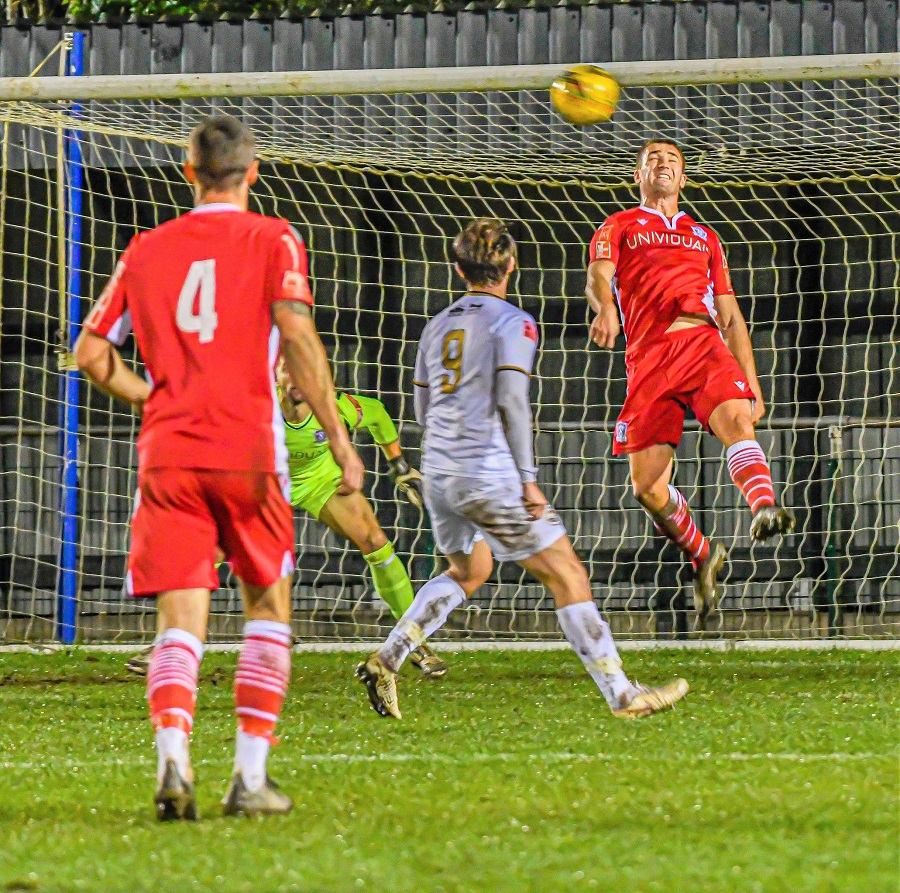 Dan Ball almost deflected a header into his own goal on the half hour but Martin Horsell was alert to grab the ball. With the game bogged down in midfield there was little action at either end for the rest of the half but Truro City went in at half time a goal ahead and probably having been the better side. 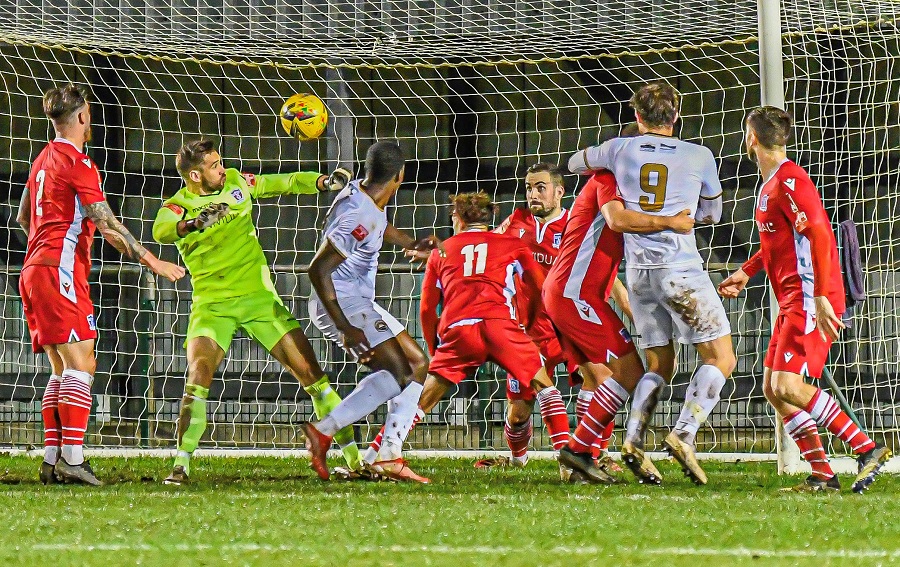 Marine needed a big response and they got it. Truro’s Will Dean hand a long range effort saved by Martin Horsell who quickly threw the ball out to Lewis Hall who took a few strides before playing a delightful long pass over the top of the Truro defence and with the alert KIERAN PHILLIPS timing his run to perfection he ran on to the ball and lobbed the home keeper James Hamon who had come out of his goal. He was stranded as Phillips scored his fourth goal in four games as the ball dropped into empty goal to level it up on 48 minutes. 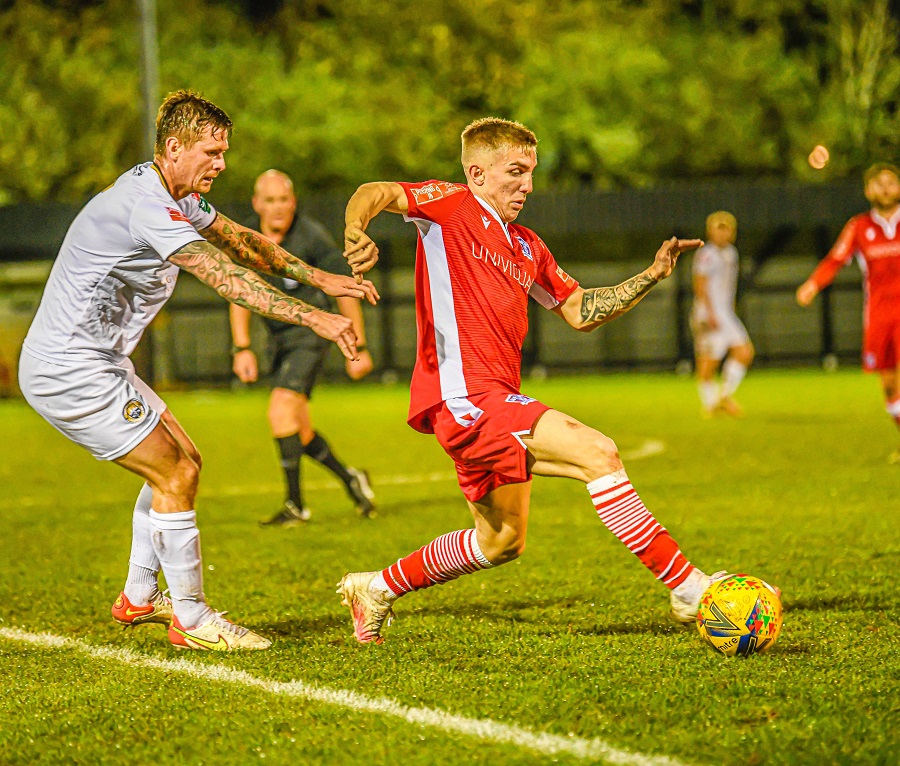 Truro looked to respond in kind when Harvey’s turn and shot was well held by Martin Horsell. Then just minutes after scoring the equaliser came the chance for the win the game for Marine. It was the same players involved as another long ball from Lewis Hall went through a number of Truro players to land at the feet of goalscorer Kieran Phillips, and with just keeper Hamon to slide it past he somehow put the ball wide of the post, a golden chance just after the hour. 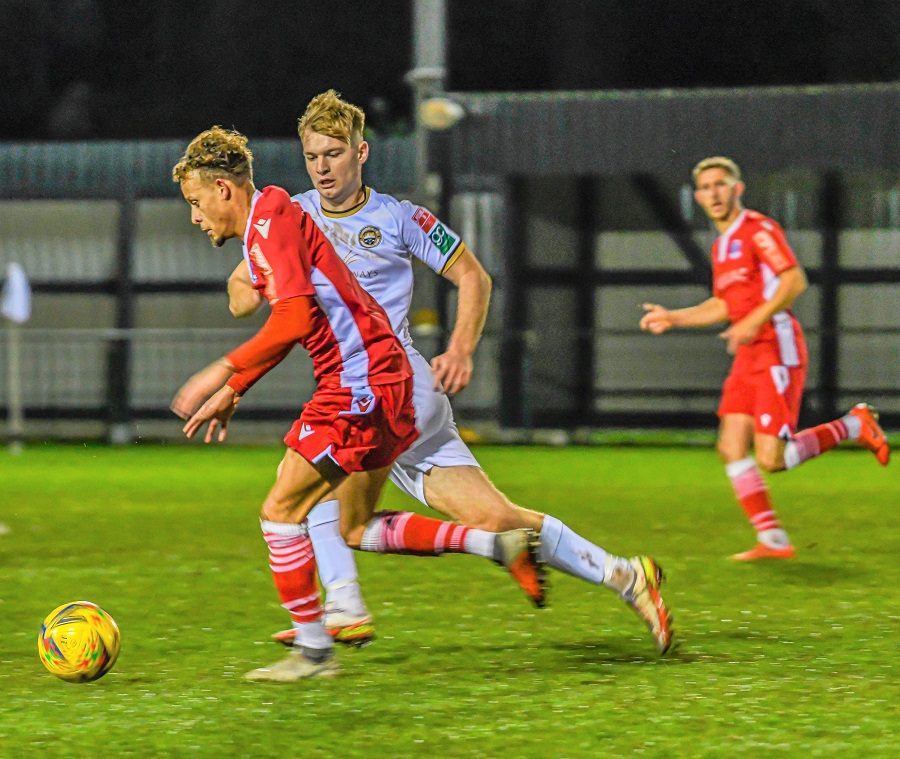 There was a flashpoint soon after when Ryan Campbell took a heavy challenge which the Marine management team seem to think was a stamp by the Truro defender but the referee opted to take no action and not even give a freekick? This didn’t deter the tricky winger who went on a determined driving run before seeing his cross eventually blocked. Marine were defending well and looked the much better side in the second half despite some dangerous set pieces for the hosts. Ryan Campbell was at it again with 10 minutes to play as another pacey run ended when a fierce strike that was deflected just wide for a corner. 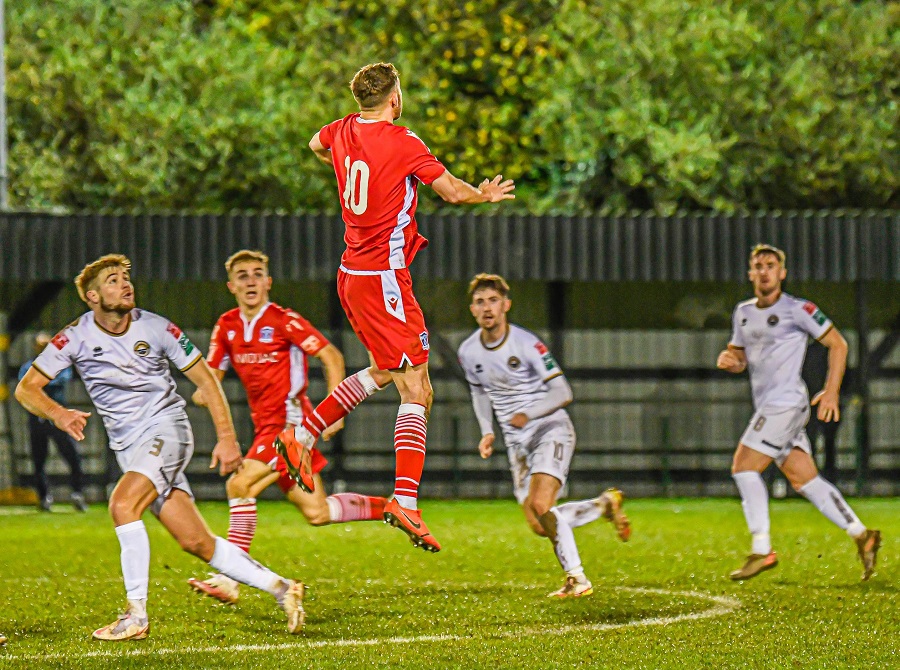 Truro had another chance themselves with a corner of their own that was also deflected wide. A Niall Thompson effort was punched away well by Martin Horsell with time running out but Marine broke quickly again and Kieran Phillips’ had a shot that wide of the post and the scores were level when the match official blew his whistle for the last time. 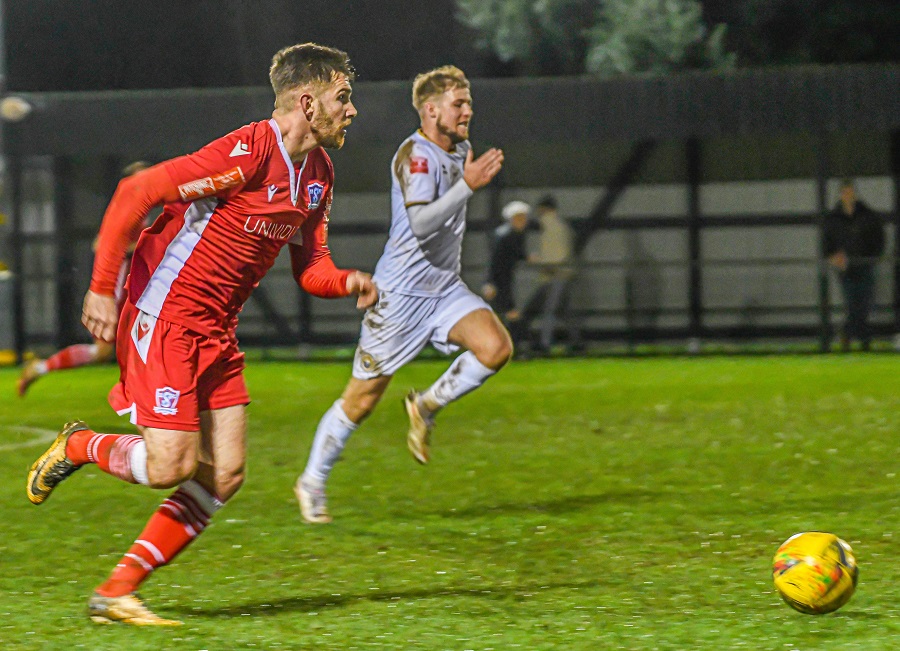 Overall an excellent point on the road and a much improved performance, especially in the second half display and a point fully deserved. On another day we could quite easily have secured the three points. Manager Lee Spalding must have been pleased with the response after Saturday’s defeat at Beaconsfield and we now look forward to hosting Yate Town at the Webbswood Stadium on Saturday.

Reporters Star Man – Kieran Phillips’, an impressive young player with a great attitude and a real fox in the box.