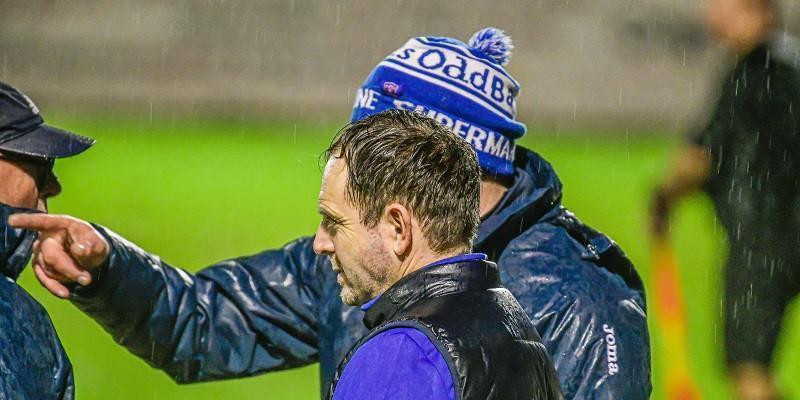 Swindon Supermarine continued on their Buildbase FA Trophy run with a Third Round clash at Twerton Park against Jerry Gill’s National League South outfit Bath City. Marine started with an unchanged but Harry Williams was missing from the bench from the previous ties against Dorchester Town and Carshalton Athletic and made a strong start to the game. Ryan Campbell was causing Bath problems down the left wing resulting in an early corner when skipper Mat Liddiardheaded wide. 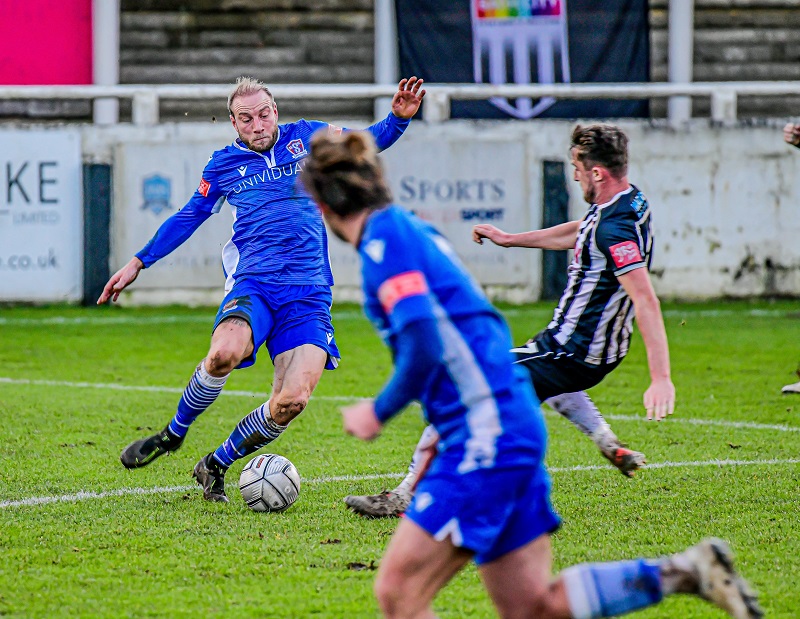 Brad Hooper hit a long range effort over the top on eight minutes and Louis Spalding kept up the efforts with a go on 10 minutes with equal result. Bath finally had a shot on the 15 minute mark when Freddie Grant blasted over but Jamie Edge was next to try as the long range shots continued to untroubled the keepers. 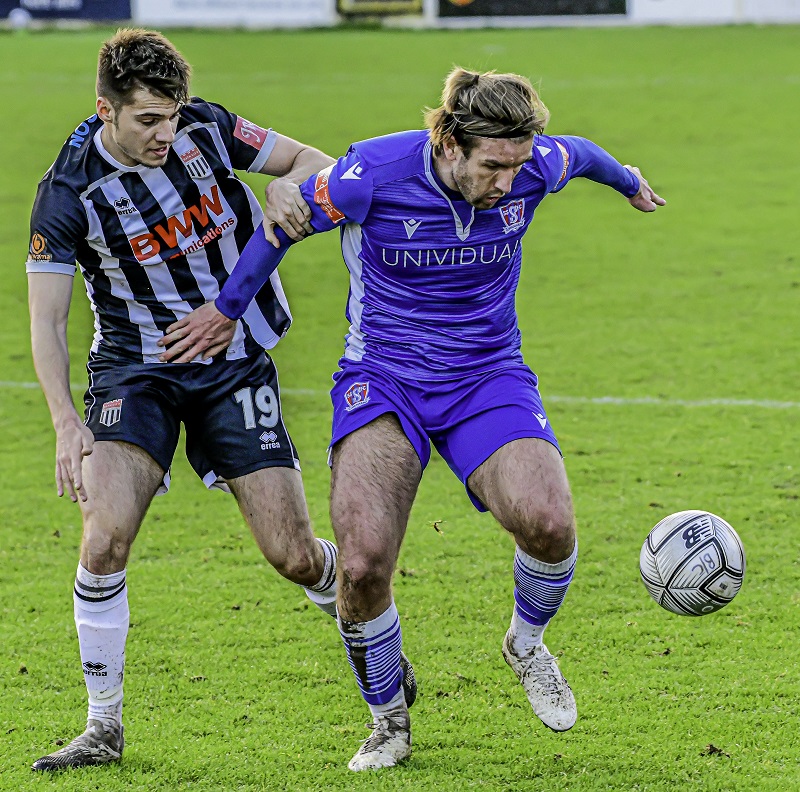 Marine had a decent first period working hard to deny their opponents. A good work rate meant The Romans did not manage a shot on target in the first half hour of the game. Tom Smith created the first real chance for Bath on 35 minutes but Mat Liddiard put in a great block which he followed up with another great piece of defending to deny Jack Batten with the follow up effort from Freddie Grant that was collected by Martin Horsell in the Marine goal. Bath were ramping up the pressure and this draw a yellow card for Liddiard as he brought down the lively Tommy Conway on the edge of the box. Louis Spalding defended well to deflect away the resulting free kick. 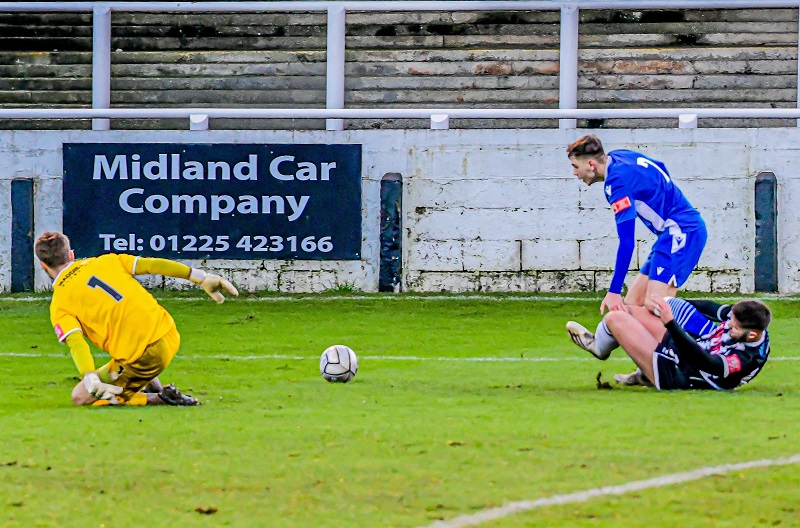 Minutes before the break the best chance of the half though fell to Henry Spalding who broke away from a neat Conor McDonagh through ball with a minute to go but but a Jack Batten got back just in time and blocked the first effort but as Spalding got to his feet first, and with only Bath keeper Will Henry to beat it looked as though he was tripped by Batten but alas missed this one along with a few other late challenges in the game?

Overall a great half for Marine – worked hard and deservedly went in level at the break and once again they began the half really strongly after the restart. Ryan Campbell chased a long ball down the left wing and having got to the ball first he crossed the ball into Conor McDonagh who collected the ball and quickly let fly with a left footed shot which was blocked by the outstretched leg of Bath keeper Will Henry. 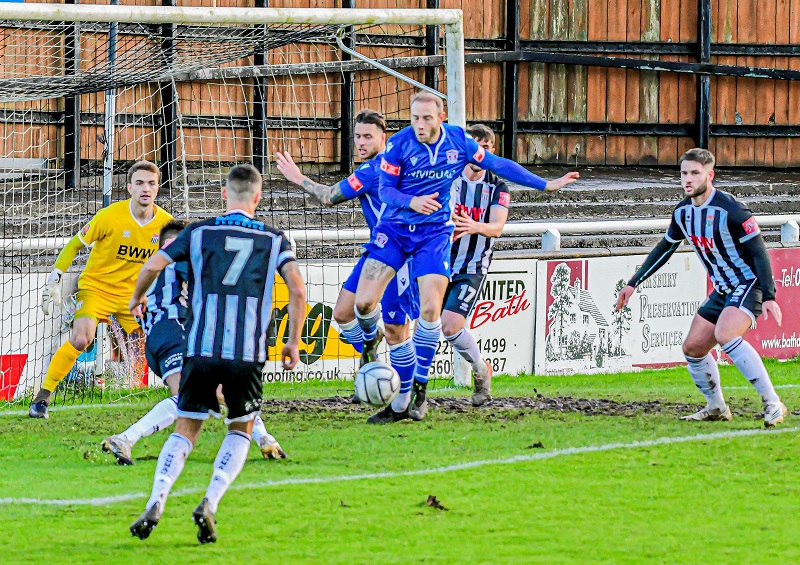 Marine were showing more intent and David Pratt just stabbed the ball wide after great work by Brad Hooper to set him up which was followed by a Ryan Campbell effort that was t deflected wide of the goal. Shortly afterwards came the incident and turning point in the tie. Jamie Edge did well to deny Ryan Harley on the edge of the box but from the follow up he was adjudged to have handled the ball, it looked a very harsh call. From the free kick just outside the box TOM SMITH drilled his shot hard and low with keeper Martin Horsell helping the ball into the net to give Bath City the lead on the hour. 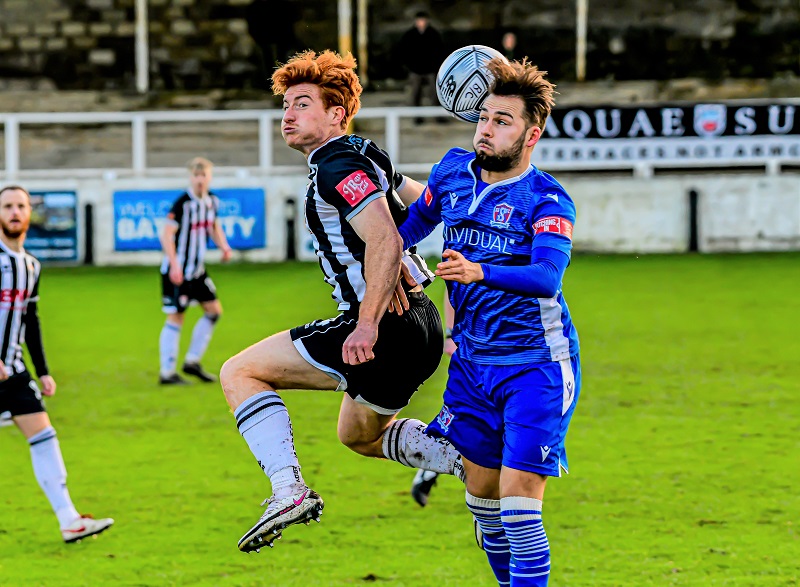 David Pratt almost responded immediately but left back Grant blocked his effort. The conditions then changed as the rain and a strong wind behind the home teams backs made things even harder for Marine. Jamie Edge was booked for a challenge and another Tom Smith effort was blocked out by another great Liddiard challenge. From the corner the ball pin ponged around before landing kindly at the feet of TOM SMITH whose fierce low shot went through a few players before nestling in the net with Horsell stranded. 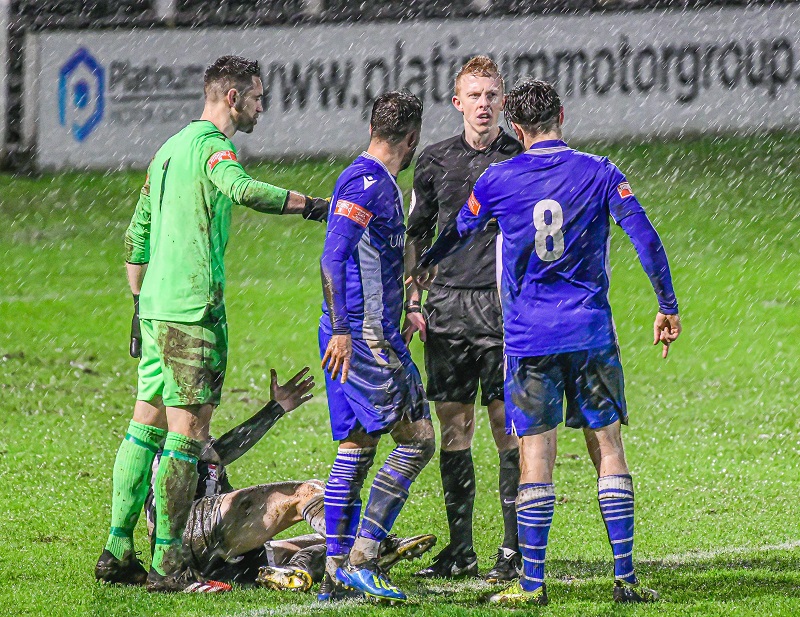 Zack Kotwica was introduced on 69 minutes for Henry Spalding to try and turn it around but Bath’s Tommy Conway was looking livelier than ever as the hosts had their heads up although Marine were still looking to push on. Horsell denied Conway and then with around 20 minutes to go a Michael Hopkins challenge on him was adjudged to be a penalty. It looked a very soft decision considering some of the challenges that went unpunished before this? Despite going the right way Martin Horsell could not keep out TOMMY CONWAYS spot kick and then soon afterwards both Conway and Michael Hopkins were booked soon for a coming together. 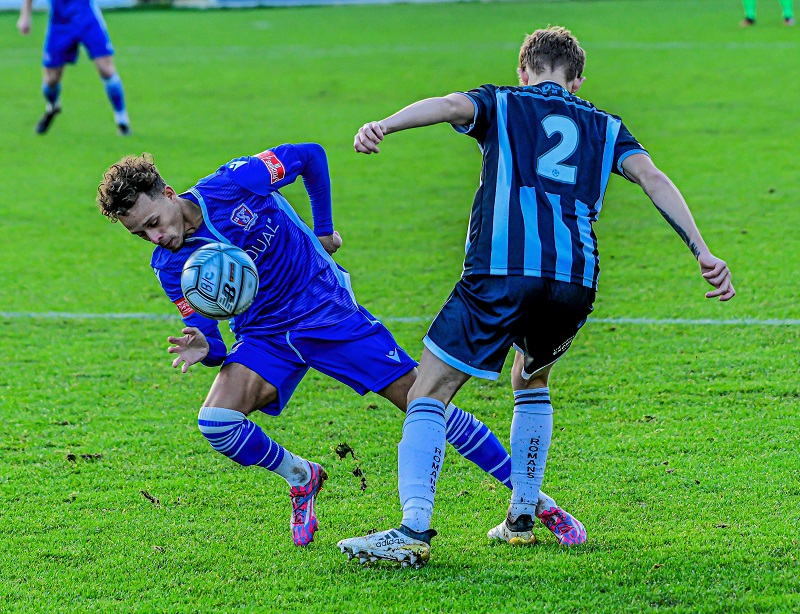 Jake Lee was introduced with 10 minutes left, replacing David Pratt as Liddiard pushed forward into midfield. Bath then scored a fourth goal after Conway came out best with a shoulder charge on Pierce Mitchell who toppled over and his neat cross found TOM RICHARDS who slotted the ball home into the top corner of the net from 10-yards leaving Martin Horsell stranded on his line. Minutes from the end Rhys Wells made his debut for Marine when he came on for Brad Hooper. 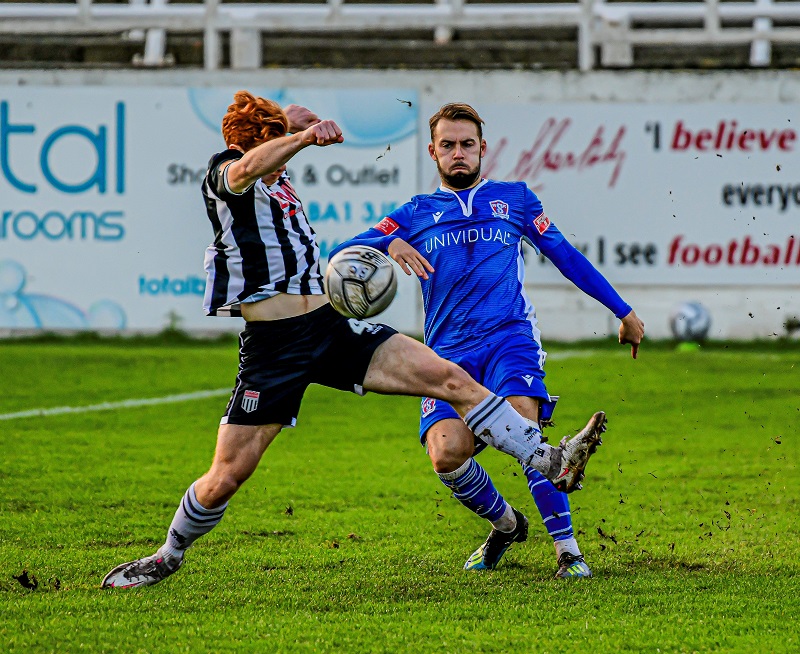 Although it ended 4-0 to the hosts for a good hour Marine had more than matched their opponents and can be rightly proud of their FA Trophy run this season. With no idea when the league will resume they now must keep fit ahead of a potential restart in the New Year, currently a start date of Saturday January 9th at Dorchester Town a possibility. Our man of the match was Ryan Campbell who looked dangerous but special praise to Jamie Edge and Matt Liddiard who led the side well through that first hour.