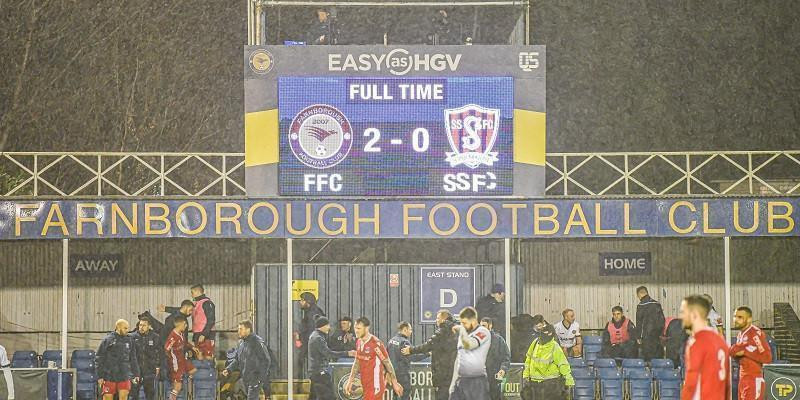 Marine were on their travels on Bank Holiday Monday as they visited Farnborough, the current table toppers as they looked to make it five wins in a row. Unsurprisingly, manager Lee Spalding opted to leave the starting line up unchanged for the third game in a row. The only alteration on the bench being Louis Evans, who was selected as cover for keeper Martin Horsell in place of Tom Golledge who was on holiday. 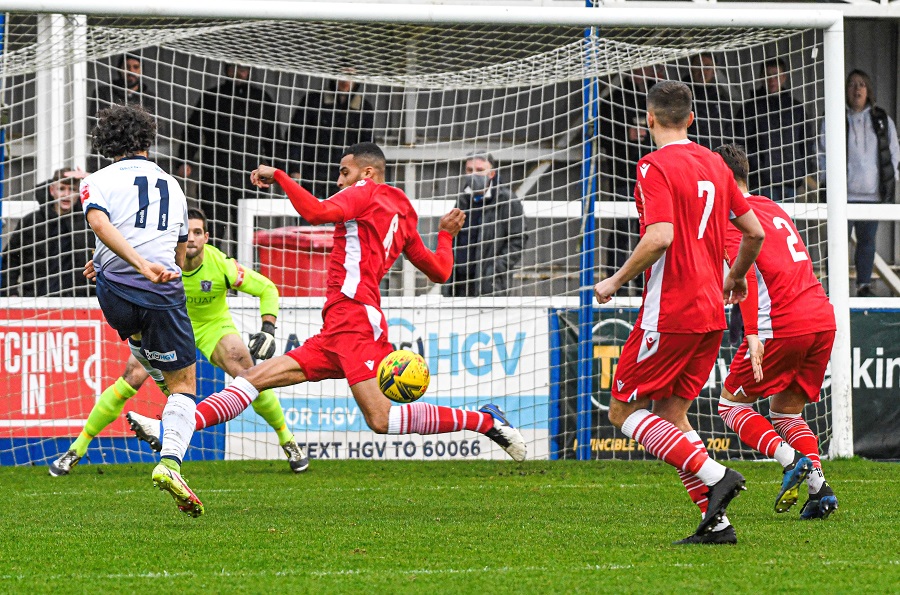 On a very wet surface Marine were looking to make it a league double as they had beaten the table toppers at home emphatically 5-2 but double scorer that day for Marine was David Pratt who now lined up for the hosts after his transfer a couple of months ago. Supermarine started strongly with some good team link up, Henry Spalding and Kieran Phillips combining very well early on without testing the home back line until the 13th minute. A strong run by Lewis Hall put the ball on a plate for Harry Williams but somehow home keeper Jack Turner pulled off an outstanding stop to deny the in-form striker, palming his shot away for a corner. This was quickly followed up by another great chance for Harry Williams but his powerful shot flew over the top instead of dipping in. 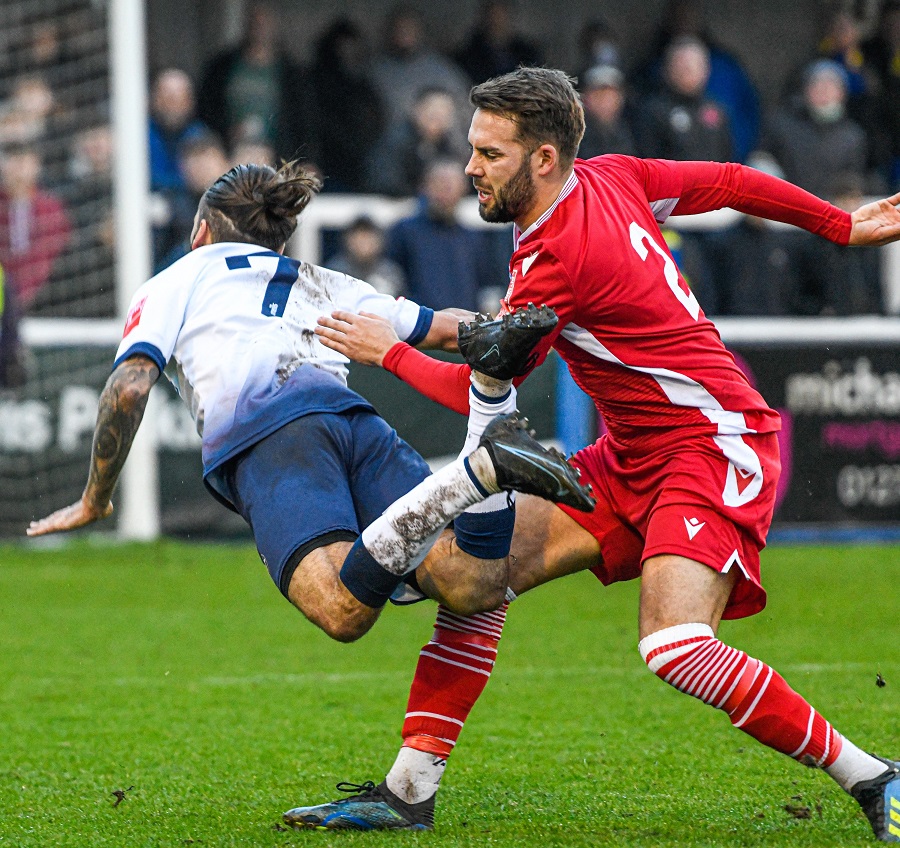 Michael Hopkins was booked for his first foul on 19 minutes against Farnborough’s winger Ricky Holmes but Marine continued to dominate the first half. The from a good move down the right flank Michael Hopkins fired the ball across the box but it just eluded everyone soon after and shortly afterwards Henry Spalding and Kieran Phillips combined well on 27 minutes before Phillips hit his shot into the side netting. Jamie Edge then tried a shot from range on 35 but hit the ball flew over the top. 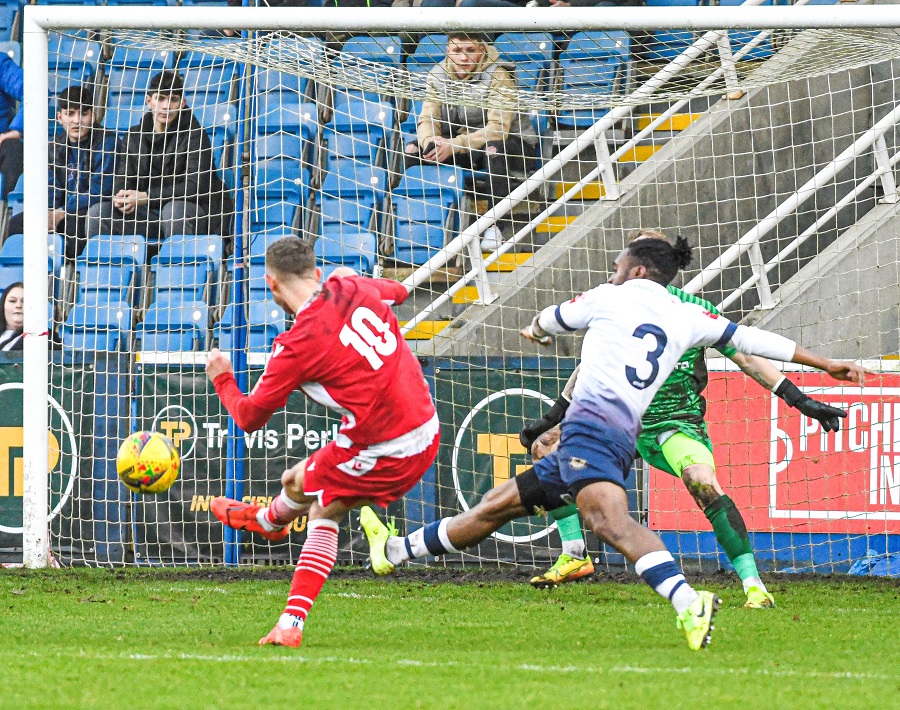 On 37 minutes and then with their first real attack Farnborough put together a fine move down the right. The ball was played into DAVID PRATT on the edge of the box, he turned past Mat Liddiard and with the shot going through Tyrone Duffus’ legs Martin Horsell was slightly unsighted and the ball slotted perfectly into the bottom right hand corner of the net. The goal was very much against the run of play but was a classic case of ‘old boy coming back to haunt’. The hosts buoyed by the goal produced a fine stop from the foot of Martin Horsell after a good strike by Selim Saied. Brad Hooper had the final effort of the half from Marine with another shot just wide. 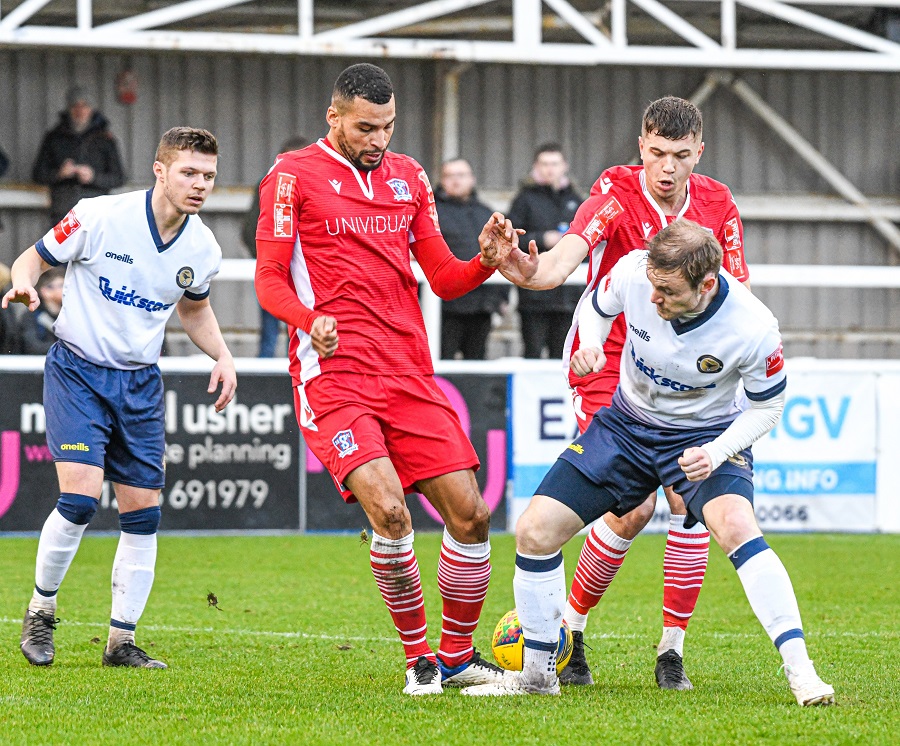 A harsh scoreline considering the domination of Marine but Farnborough had taken their chance and we had missed ours. Nevertheless the visitors would go into the second period confident of turning it around based on their first half showing. However the game took a dramatic turn just ten minutes into the second period. Farnborough’s Selim Saied broke into the box after a neat one-two with Sam Deering and with defender Tyrone Duffus challenging Saied appeared to throw himself to the floor although Duffus was in close attendance?. The referee pointed to the spot in what looked like the softest of awards he had given all game up to then as he allowed much more contact previously. Had there even been contact? Nevertheless it was given and the hosts had some luck there also. PAUL HODGES stepped up and the ball struck the underside of the crossbar and with keeper Martin Horsell going the correct way to his left the ball flew down off the bar and hit him on the back and rolled into the net for 2-0. 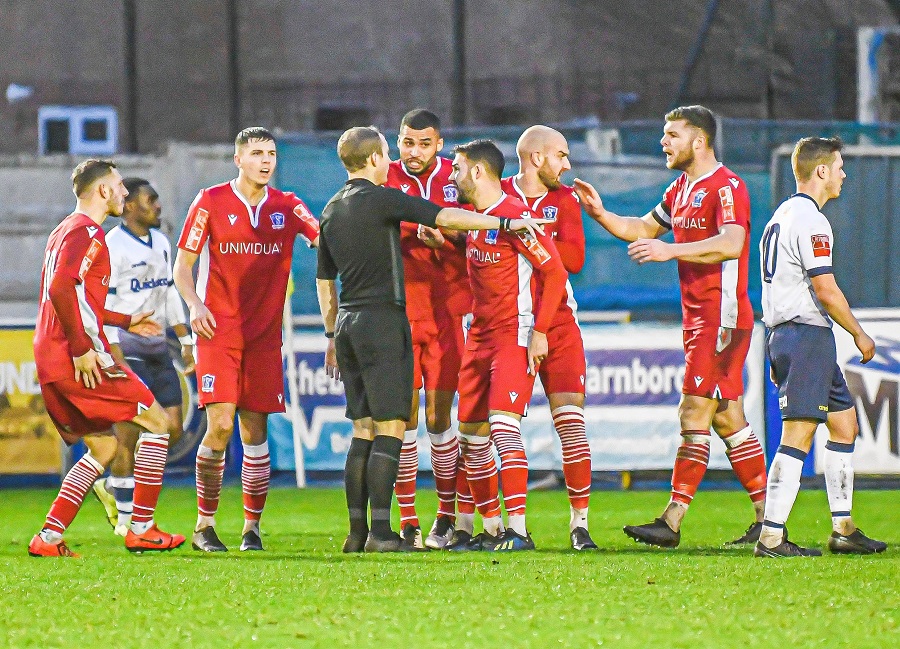 This was a real game changer as Farnborough elected to keep what they held and defended stoutly for the rest of the match to deny Marine any space to attack whilst countering when they could using the pace of Selim Saied and Ricky Holmes. Marine pushed but found chances harder to come by although on 65 minutes Harry Williams went down in the box when through on goal and although there looked some contact from the Farnborough defender this time the match official waved the appeal for a penalty away and played on? 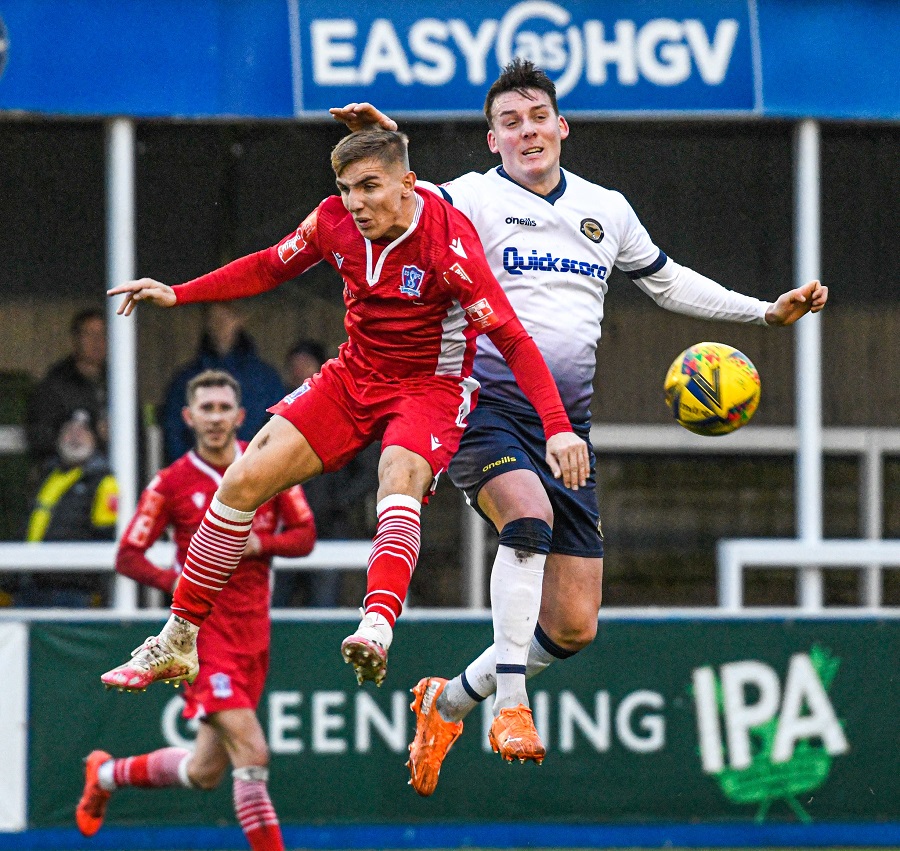 David Pratt put the ball in the net once more soon after but was a country mile offside. Pierce Mitchell and Zack Kotwica were brought on late in the game to try to change things but the only real attacks came from Farnborough breakaways. Boro’ right-back Jordan Alawode-Williams went on a strong run as he went past players to the bye-line only to get the finish all wrong as it flashed across the Marine penalty box. But with time running out Marine had some good chances to claim a consolation. Lewis Hall’s effort from 25-yards was hit powerfully but was straight at Turner in goal, Harry Williams should have perhaps got on the scoresheet with one minute left but somehow put it over and then Ryan Campbell had a shot pushed round the post by Turner in injury time. The final act saw Tyrone Duffus’ flicked header just drift wide. 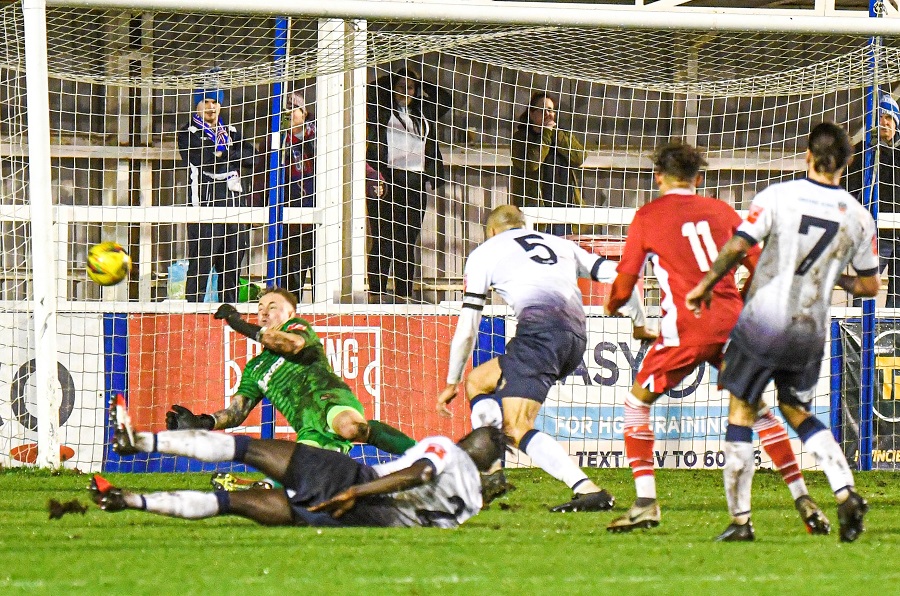 It wasn’t to be for Marine who overall acquitted themselves well against an outfit riding high at the top of the league. A showing like this against most teams would see a better result nine times out of ten and they will need to continue to show such effort as they take on a team from the other end of the league on New Years Day with Merthyr Town travelling to the Webbswood Stadium.