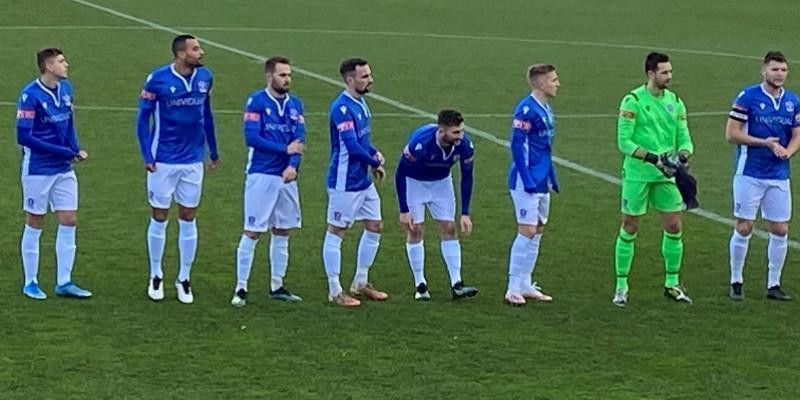 SUPERMARINE DOWN THE BOROUGH

Marine were on the road again as they travelled down to Privett Park home of Gosport Borough who were riding high in fourth place in the table before the game. Manager Lee Spalding opted for two player changes from the previous starting eleven, bringing back Lewis Hall at left back and moving Michael Hopkins to the right side with Jamie Edge coming into the midfield as Dan Ball was unavailable for personal reasons. Also missing were George Dowling through injury and Pierce Mitchell serving a one game suspension for reaching five bookings.

On a freezing and very blustery Saturday afternoon after a cagey start Marine took the lead after only eight minutes. Jamie Edge’s cross from the right was spilled by home keeper Bertie White allowing HARRY WILLIAMS to slot the ball past a defender on the goal line and score an early goal. The bright start continued as Ryan Campbell had a mazy run and shot over the bar before another attempt from Williams also went just over the top following a superb run by Henry Spalding who went past three Gosport players before setting him up.

Marine were limiting Gosport to a few sporadic chances but Martin Horsell and his defence were relatively untroubled for most of the first half. A loss of concentration and a mistimed tackle by Jamie Edge was rewarded with a yellow card with 10 minutes to go and from the free kick Gosport’s Brad Tarbuck could only fire over the bar. In this first period most of the Gosport attacks came down the left flank where Mason Walsh saw most of the ball and Marine’s right full back Michael Hopkins found him a tricky player but he restricted his advances to a minimum.

The hosts as expected came out fired up in the second half and there was a massive let off just two minutes into the half. Brad Tarbuck had an close range effort well saved by Martin Horsell and the follow up by Dan Wooden from close range was destined for the goal but Horsell was there again and pushed his shot onto the post and the ball was cleared. On 57 minutes it was Marine’s turn to hit the post and it was the lively Kieran Phillips and Henry Spalding who were on the counter attack and from 20-yards Phillips’ drive smashed off the post and bounced kindly back into the keepers arms. Spalding followed this up with a speculative long range effort that went wide soon afterwards.

Marine were playing extremely well on the break and the pairing of Spalding and Phillips’ broke away again and with two on one situation Gosport defender Matt Casey managed to nick the ball at the vital moment to deny the visitors once again. But it wasn’t long before the backline was finally breached once more as Gosport went all out for the equaliser. The transition was working well and this time Harry Williams played in KIERAN PHILLIPS once more on goal and with just the keeper to beat and he made no mistake to find the back of the net on 64 minutes. Minutes later the game was sealed in a double whammy when in the 69th minute Brad Hooper and Kieran Phillips broke away on another counter attack and after a change of passes a low shot from KIERAN PHILLIPS beat the keeper to make it seven goals in seven starts for the Bristol Rovers loanee.

Gosport went for it after Marine’s third goal as they created a number of half chances but keeper Martin Horsell was on hand again to save from a Dan Wooden chance. Kieran Phillips close to a hat-trick but was denied this time by a good stop from keeper Bertie White. With 15 minutes to go Zack Kotwica replaced Ryan Campbell for Marine. Matt Paterson came close for the home side after a ricochet in the box but fired over and finally from a corner the hosts got a goal back on 79 minutes left and a bizarre and an unlucky goal to conceded for Martin Horsell. A Gosport corner caught the wind and as the ball was spilt by Martin Horsell it landed on the back of Lewis Hall’s head as he tried to duck out of the way and the ball crept softly of the Marine goal line for what was a consolation goal for the home side, a disappointing way to not secure a clean sheet?

Conor McDonagh replaced Harry Williams, who had a good game on 82 minutes, and straight away McDonagh looked to keep the ball and eat up the minutes left despite one further chance for Gosport which was sliced wide from the lively Mason Walsh Marine held on for a well deserved three points on the road, their first away league win since late August at Wimborne Town. In the last minute Martin Horsell was booked for time wasting but he was by no means as bad as some of the players we have faced in recent games who have got away was much blatant antics and ‘game management’?

All in all a super display from the entire team to pick up the win against a playoff chasing team. A huge collective effort led well by skipper Mat Liddiard with the game plan working exactly as Lee Spalding and his assistant Charlie Griffin had wanted it to. A result that should be a great boost to the confidence of all the players moving forward and the welcome to our Wiltshire rivals Salisbury at the Webbswood Stadium next Saturday.