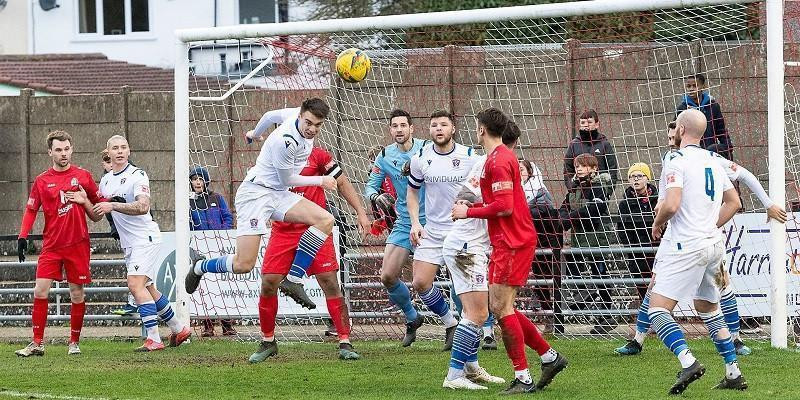 BATTLING POINT AT THE BOROUGH

Marine were on the road again with a trip down the M4 to the Rogers Family Stadium home of Harrow Borough. After the disappointing defeat at Dorchester Town last week it was no shock that manager Lee Spalding rang some changes. Pierce Michell came in at right back with Michael Hopkins switching to his more familiar left back role with Lewis Hall unavailable. Tom Sharpe came in at the back with Jamie Edge moving back to midfield. Top scorer Harry Williams replaced Conor McDonagh up top and George Dowling was back in the midfield in place of Matt Britton who dropped to the bench alongside the returning Zack Kotwica after his loan spell at Cirencester Town whilst Tyrone Duffus was still missing with a broken toe. 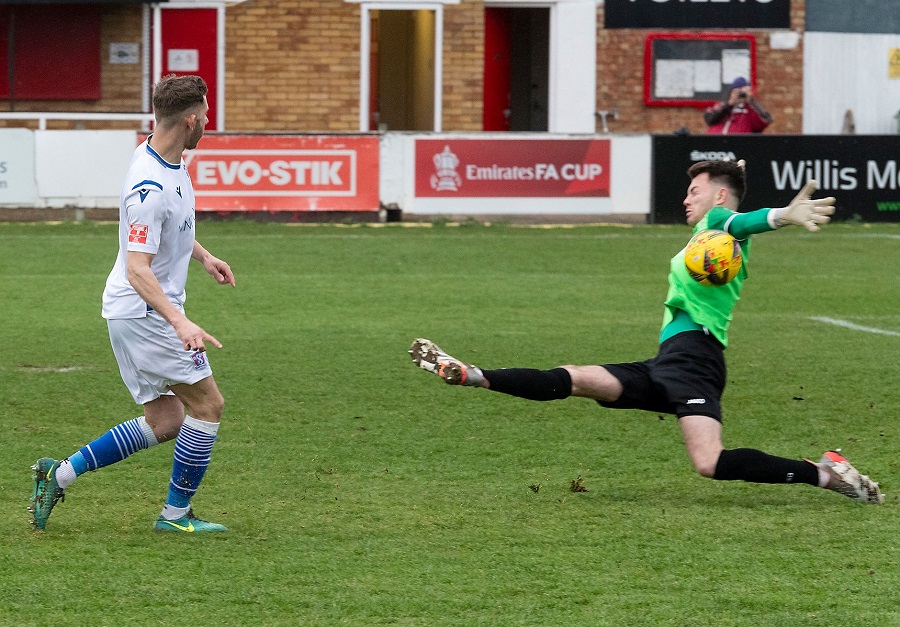 Marine in a change strip of white supported by a healthy travelling contingent went up the slope first half and almost immediately had a chance to take the lead when Harry Williams was put through and looked certain to score. But Josh Strizovic in the home goal made himself big to deny the striker not once but twice with the initial shot coming back to Williams. The forward continued to cause early problems for the hosts with a shot deflected wide a few minutes later. The game looked very open both sides playing good attacking football looking for the win. They were not helped however by tricky condition, the slope was tough enough but with the added gusty wind control of the ball was hard for all players out there. 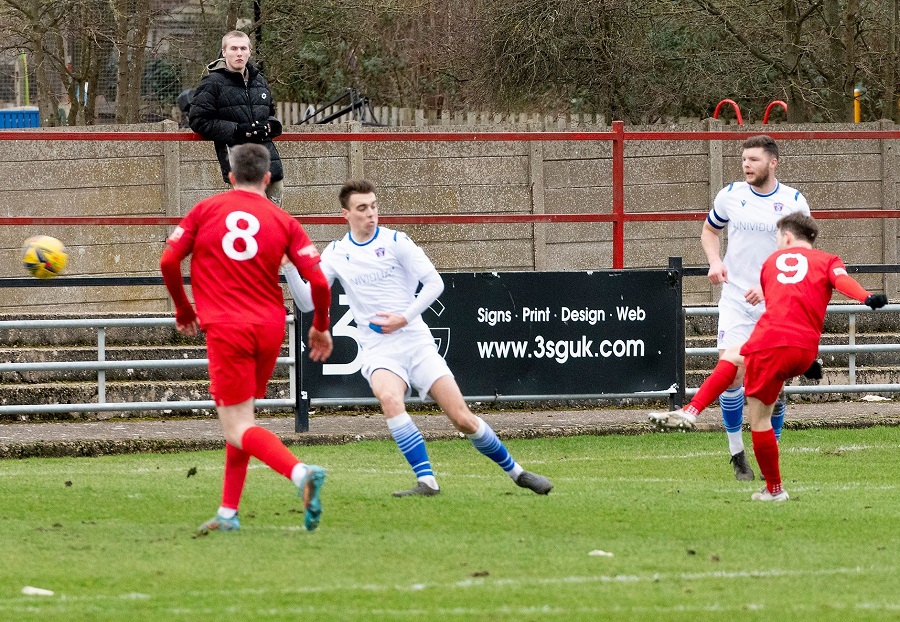 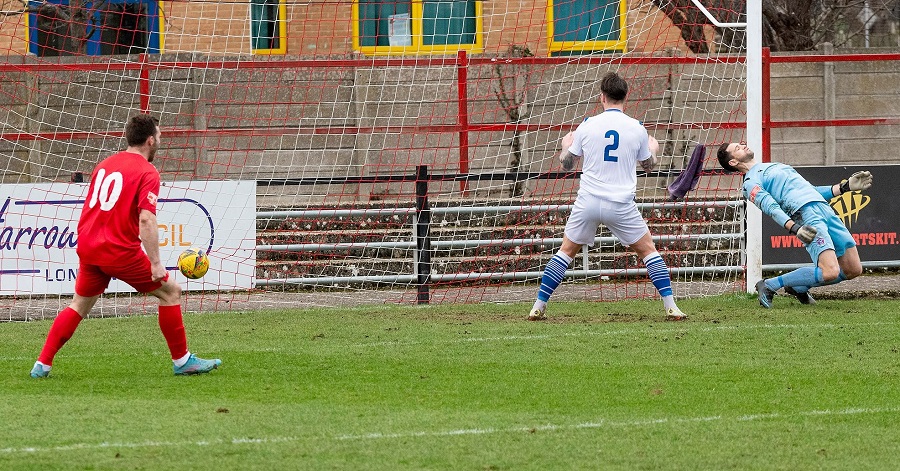 Martin Horsell was called into action for the first time on 25 minutes when right fullback, David Amate’s cross shot had to be punched away. Mat Liddiard came close from a Jamie Edge free kick and perhaps should have done better with the header which went over the top. Then out of the blue the opening goal! A nice move down the right wing saw the ball played into the near post by David Anate for Borough key man JAMES EWINGTON who drove the ball home with aplomb, high into the net giving Martin Horsell no chance. Marine tried to respond with a good move of their own before half time but the final effort saw Henry Spalding’s spoon the shot into Strizovic’s hands. A half that didn’t really deserve a lead for anyone but the hosts had sneaked in front and Marine looked back at that early chance and wondered what might have been. 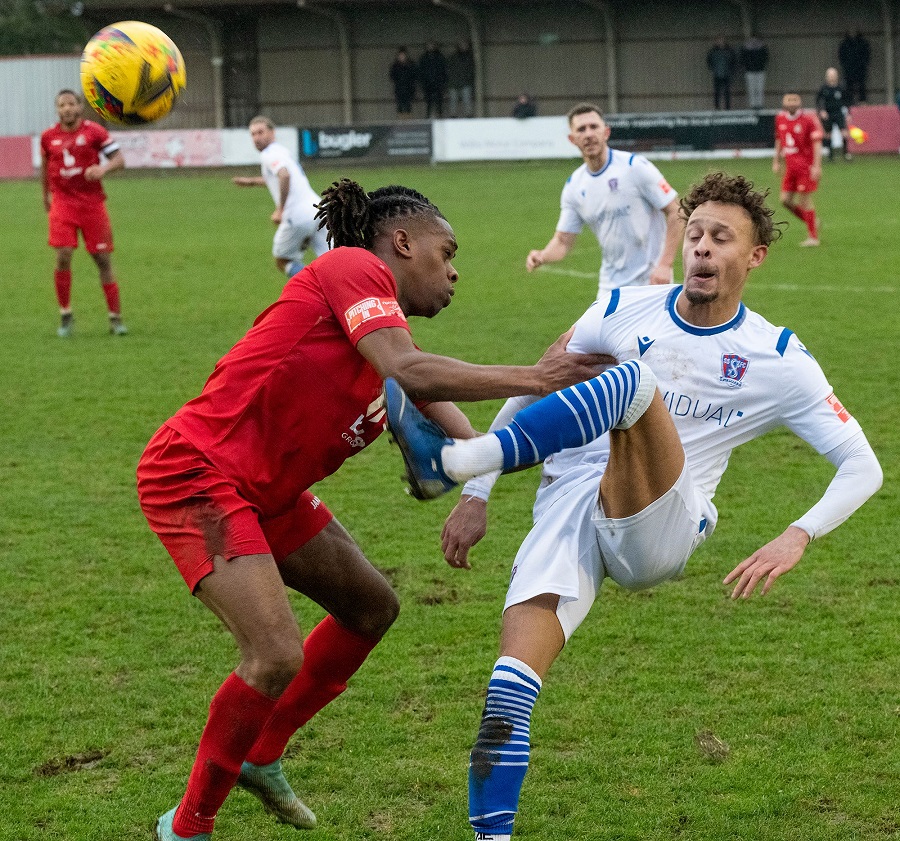 The management team opted for a half time change, with Ryan Campbell coming on for Tom Mehew who had struggled in an unfamiliar wide midfield position. And straight away Marine showed much more intent going down the slope now. George Dowling’s early free kick tested the keeper and Ryan Campbell had an early run and shot just wide of the upright. The pressure was telling when Ahmet Biler went into the referee’s book for a poor tackle on Pierce Michell who made a good run down the right. 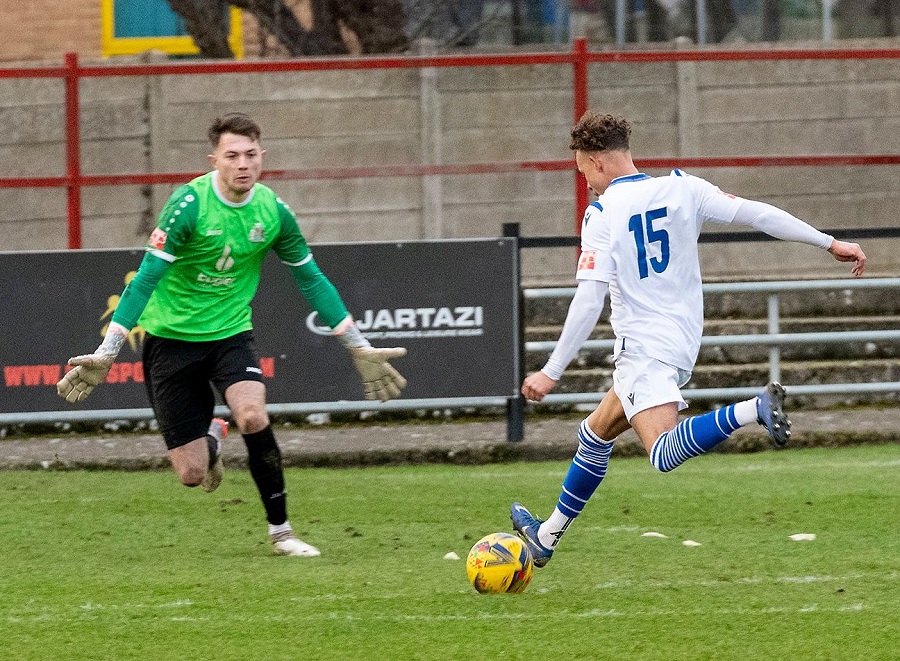 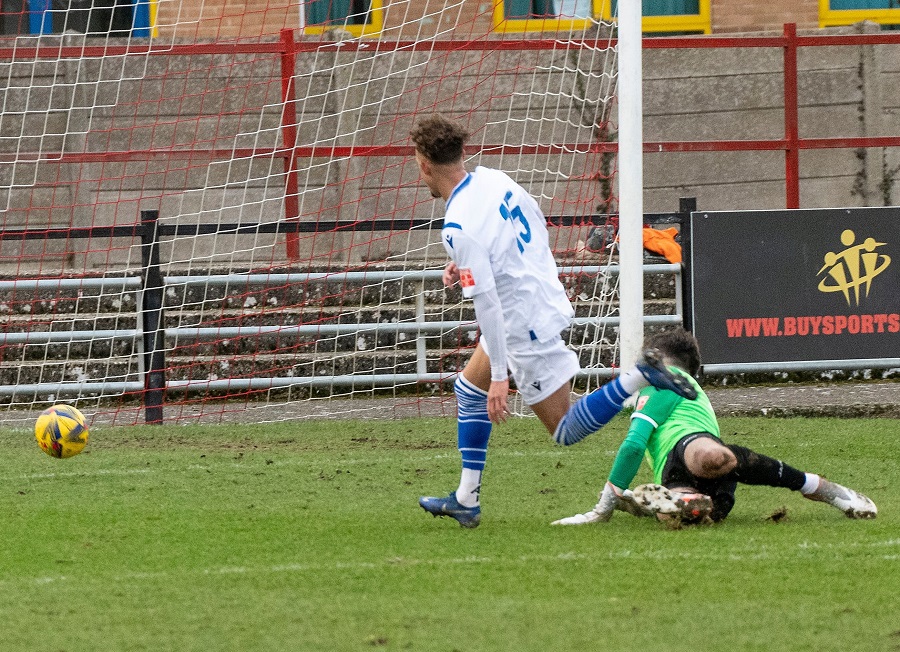 Harry Williams then just flicked a header wide from a Michael Hopkins cross and the pressure by Marine was building! Williams was played through again but just lost his footing at the vital moment but on 58 minutes Marine made the breakthrough they deserved. The imperious Tom Sharpe played a superb through ball to to RYAN CAMPBELL who ran through the home defence having outpaced his marker, and slipped the shot past the on rushing keeper Strizovic to level it at 1-1 for his eighth goal of the campaign. They experts always say you are vulnerable just after you’ve scored and that was the case for Marine. Still celebrating that equaliser Borough put in a move down the right wing, whipped in an excellent cross and GEORGE MOORE finished emphatically at the back post to stun Marine and give Harrow their lead back inside a minute! 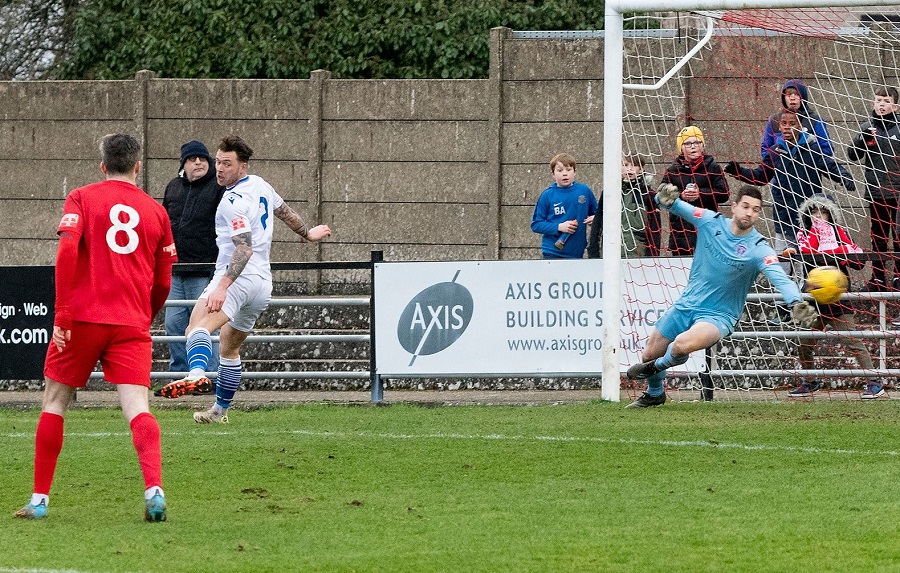 But in a crazy five minutes Marine were determined not to be undone and it was KIERAN PHILLIPS who supplied the magic. Marine broke quickly a few minutes after conceding a second goal and the ball ended up at the feet of Philips and he showed a superb piece of skill to beat a couple of defenders followed up by a shot from the edge of the box, curling the ball into the top right corner of the net to give the home keeper no chance! A 12th goal of the season for the hitman just after the hour mark. 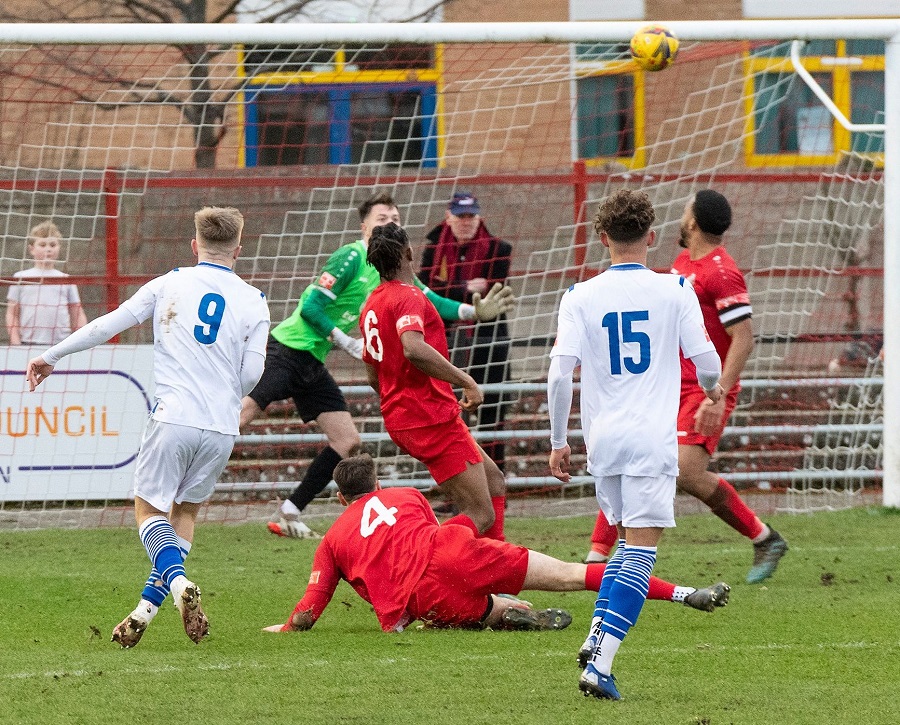 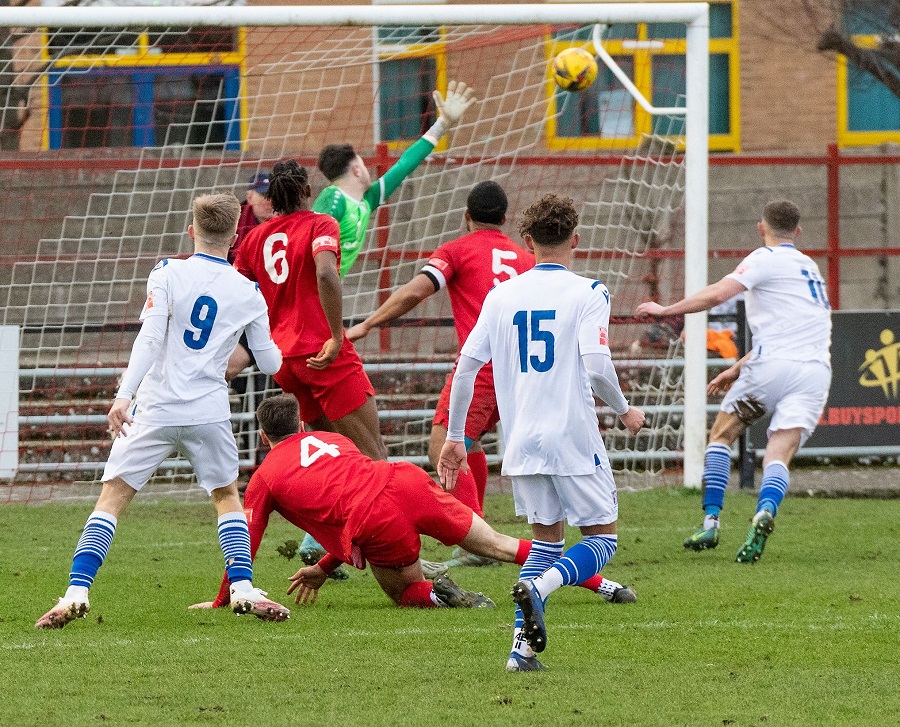 Harrow responded by putting some pressure back on the Marine goal. Martin Horsell just did enough to get the ball away on 65 minutes after a bit of a scramble. But Kieran Philips and Ryan Campbell were causing the home defence all kinds of trouble and it seemed Marine were going to push on for the winner with the hosts restricted to long range shots over the top. Michael Hopkins went into the book with ten minutes to go after a late tackle and Martin Horsell made a good save when one of these long range efforts hit the target. 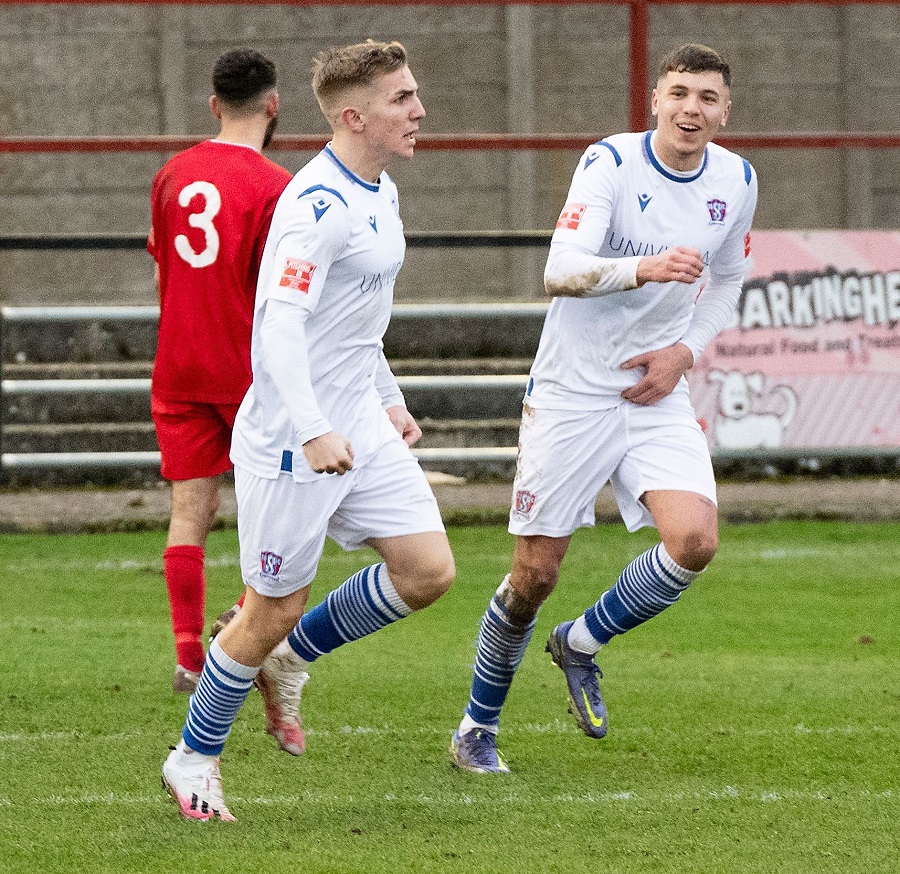 Marine made a late double sub to try and grab the winner when Conor McDonagh and Matt Britton replaced Kieran Philips and George Dowling and despite dominating the late pressure the hosts held on for a point. A good battling display from Marine with a point well earned, could quite easily have grabbed all three with a bit more luck on the day. Special shout out to the officials who performed superbly on the day as we hardly noticed them. Also, to the fine hospitality from our hosts who were some of the friendliest we have encountered this season, thank you!