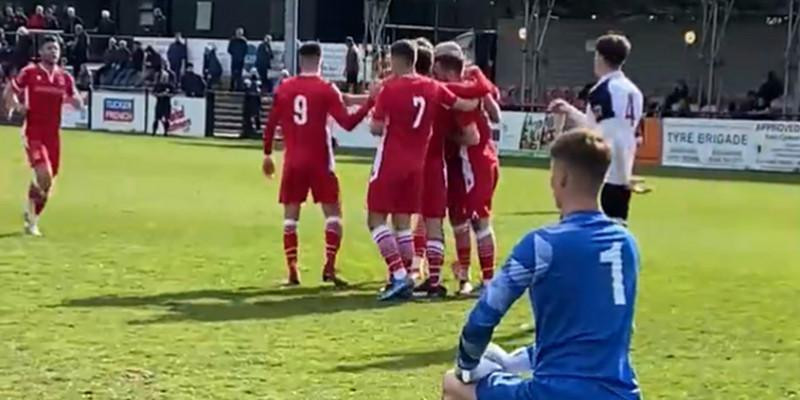 Marine had their penultimate trip on the road of the season as they travelled to Hertfordshire to take on Kings Langley. Langley are fighting against relegation were sure to be up for the fight. Manager Lee Spalding shuffled the pack with starts for Bad Hooper , Conor McDonagh and Zack Kotwica. With Harry Williams, Kieran Philips and Tyrone Duffus dropping to the bench and Tom Sharpe moving into the back four. George Dowling returned after illness to the substitutes with Matt Britton missing the match with a hamstring injury.

Marine made the early running with Conor McDonagh firing over the crossbar after just three minutes, in what was looking a very open game of football. A long ball from Martin Horsell found Ryan Campbell on the edge of the box but he could only find the side netting with his shot. Pierce Mitchellput in a good cross but Conor McDonagh could only direct the header over the bar on thirteen minutes. Just before the half hour it should have been 1-0 to Marine. A well worked corner found skipper Mat Liddiard unmarked at the back post but he somehow headed the ball over the bar from two-yards. Then Zack Kotwica’s neat run soon after did not find a suitable finish as the ball skewed well wide of the goal.

The first goal finally arrived and it was all about CONOR MCDONAGH. In his 110th appearance for the club he collected the ball thirty-yards out, beat a couple of defenders before curling the ball into the net past home keeper Alfie Marriott in on forty-one minutes. Henry Spalding had a header saved soon after before some excellent work by Martin Horsell just before half time. A wicked in-swinging free kick from Alfie Williams was expertly punched away to keep the score going into the break at 1-0 to Marine.

Kings Langley made a change at the break with Ben Lacy-Turner coming on for Alfie Williams. Marine came out for the second half slightly lackadaisical and paid the price on fifty-eight minutes. A nice ball in from the right found substitute BEN DE LACY-TURNER on the edge of the box and he finished hard and low into the corner of the net with the Marine defence watching on. However this spurred Marine into life and the lead was restored inside a minute. Lewis Hall’s excellent run down the left wing as he went past a couple of defenders found Henry Spalding who teed up CONOR MCDONAGH whose excellent turn and shot deceived everyone as the strike rippled into the back of the net.

Kings Langley centre forward Brad Wadkins had the ball in the net on sixty-five minutes for the hosts but was offside by a long way. Marine continued to dominate with Conor McDonagh causing all kinds of problems as he looked for his hat-trick. Marine’s Zack Kotwica went into the book for a sloppy challenge and despite the entrance of George Dowling and Harry Williams late on, Henry Spalding and Zack Kotwica another goal didn’t arrive. But the job was done, three points gained and a top half finish now firmly on the agenda with three games remaining.

Fans man of the match: Conor McDonagh, a star showing on the day.