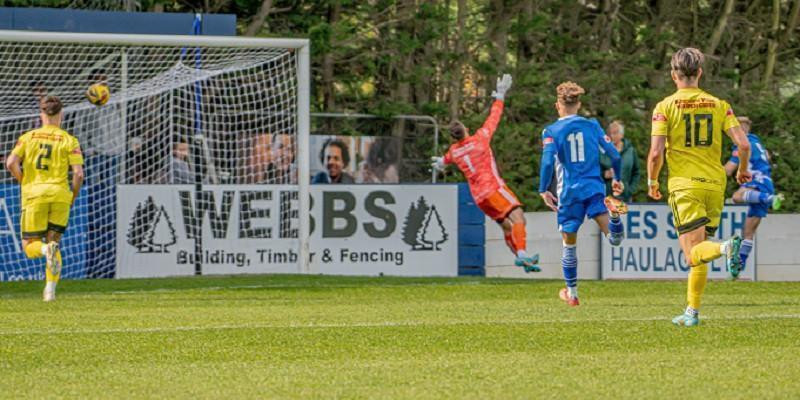 Marine took on Tiverton Town at the Webbswood Stadium on Saturday afternoon as there Southern League campaign came to an end. manager Lee Spalding made three changes from the last starting line up at Merthyr Town with Henry Spalding, Brad Hooper and Kieran Phillips coming into the side having made a strong impact from the bench during that match. Dropping down were George Dowling, Conor McDonagh and Zack Kotwica. Tom Sharpe suffered concussion from a blow in training midweek so Pierce Mitchell made his return to the squad on the substitutes bench. 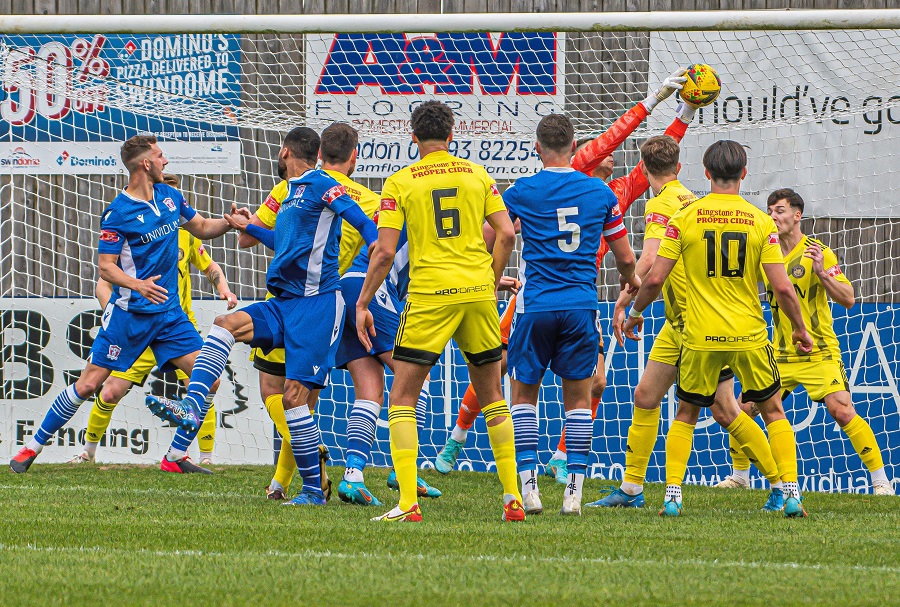 Marine made a strong start with Kieran Phillips having an early shot blocked by Tiverton keeper Lewis Williams. The match then settled into a holding pattern where defences reigned supreme for the most part. Martin Horsell was called into action on nineteen minutes when a cross found Andy Watkins a couple of yards from goal and he stuck out his right foot to turn it around the post. Ryan Campbell had the next chance of the match seeing his shot deflected over for a corner by central defender Austen Booth. From the set piece Tyrone Duffus got to the ball first but his header, although the ball was on target it a little lacked power and keeper Williams gathered the ball. 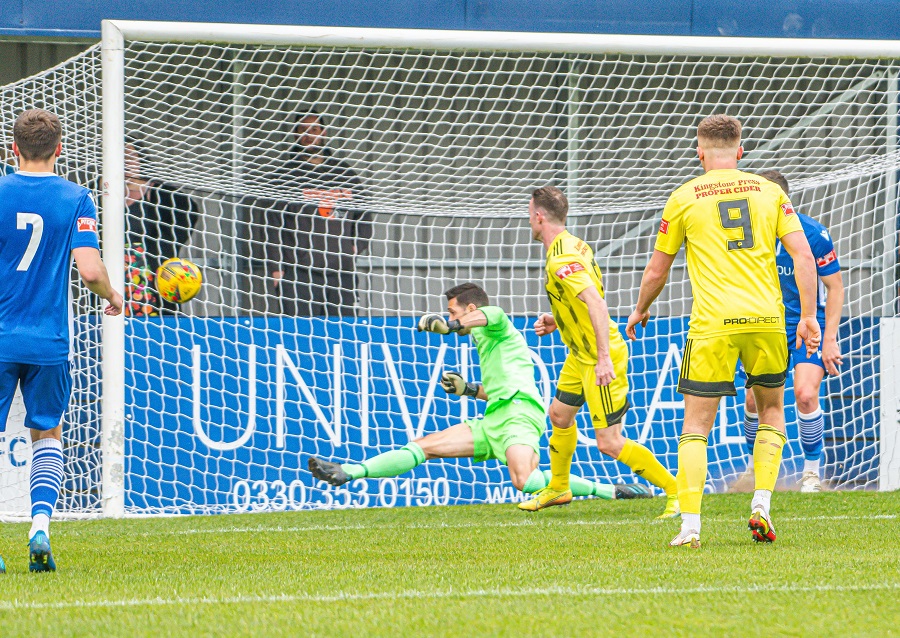 Martin Horsell was quick off the line on the half hour to deny Orlando Anker a shot from a dangerous move. Harry Williams went down in the box on thirty-five minutes but had his appeals waved away before Horsell again produced a fine stop pushing Joe Belsten’s long range effort wide of goal. Belsten was again close to breaking the deadlock somehow heading the corner wide of goal from close in. The half ended with Matt Britton picking up a muscle injury and having to be replaced by Pierce Mitchell. Overall an even and entertaining first half with Tiverton maybe having the better chances but Marine more in control of the ball. 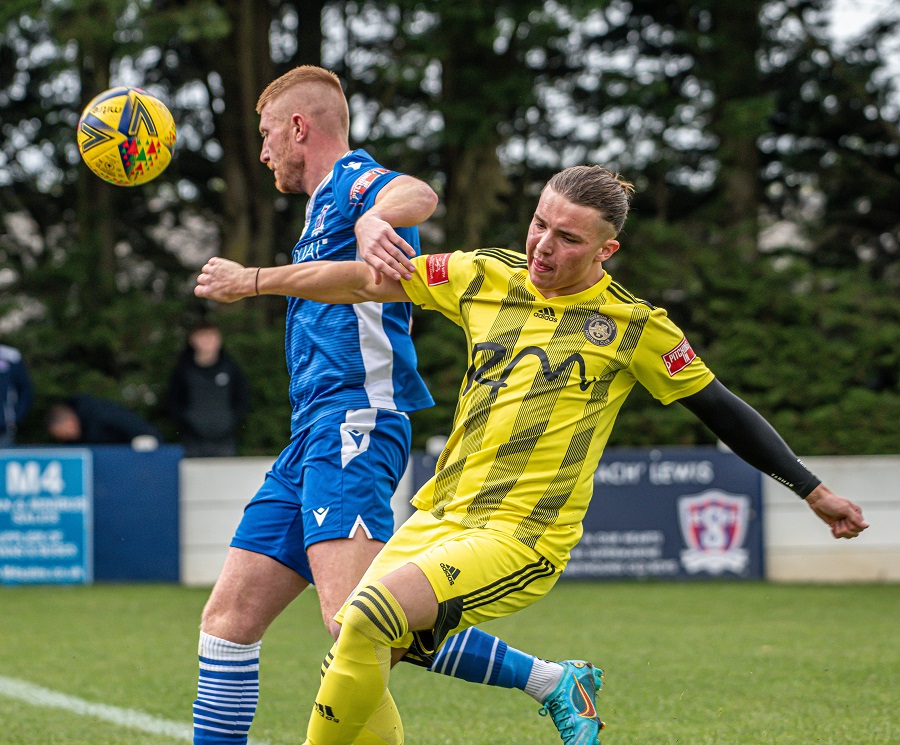 The second period saw Marine looking far more assured than in the first half and it was no real shock that they took the lead on fifty minutes. Tyrone Duffus, who was imperious all afternoon, fed Henry Spalding down the right wing, his excellent ball into the near post was reached by KIERAN PHILLIPS who took the ball in with a a touch waist high and before the Tiverton defenders could react and the ball had touched the floor he volleyed the ball beyond Williams and into the back of the net for his 16th goal of the season, putting himself one clear as top goalscorer for Marine. 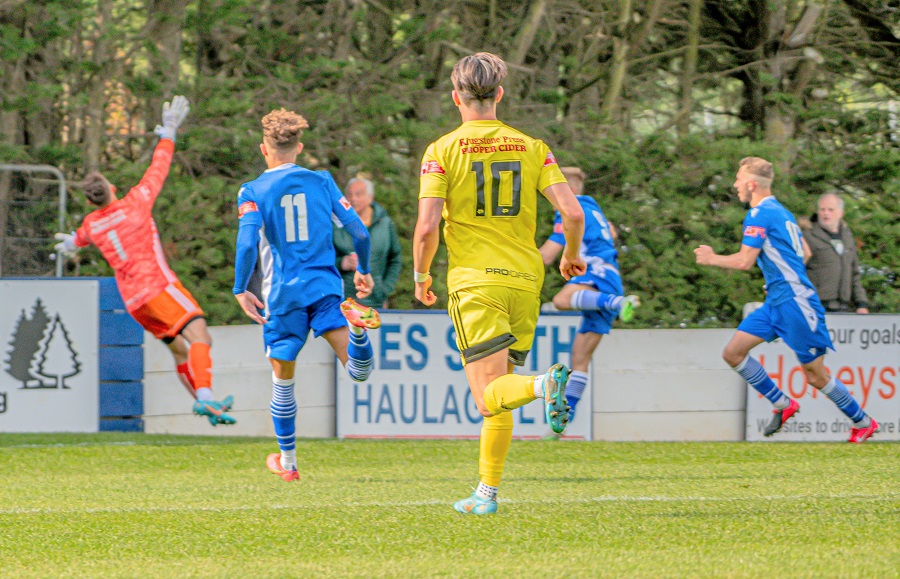 Tivvy responded by replacing Anker with Jin Heon but Marine continued to dominate the game by this time, with confidence flowing through the side after the opening goal. Henry Spalding’s thumping low shot was repelled by the foot of keeper Lewis Williams and then Phillips found himself clean through on goal once more from a Harry Williams defence splitting pass but with just keeper Williams to beat he lashed over the crossbar as the ball took a wicked bobble just as he took his shot. It was nearly very costly as the visitors got on the end of a cross but the header from Tiverton skipper Gary Warren hit the crossbar and bounced away. 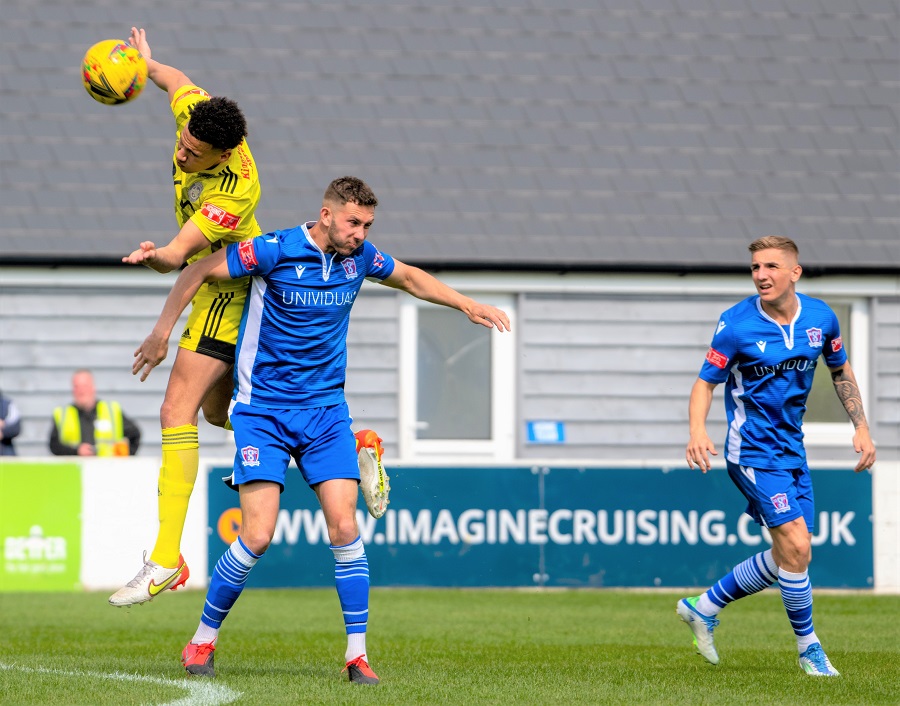 Marine were dominating the game by this time and Kieran Phillips was causing them all sorts of problems with his speed and movement and was once again denied by a defender clearing the ball on the line on the hour mark. But with the clock on sixty-six minutes Henry Spalding produced some magic as he threaded the ball through to Ryan Campbell for his second assist of the match. CAMPBELL ran onto the pass and smashed the ball home with power to seal the deal and score his third goal in three games. His form has been tremendous since the turn of the year and he nearly added a third goal seconds later but the shot was blocked by the Tivvy defence who were now having to defend in numbers. 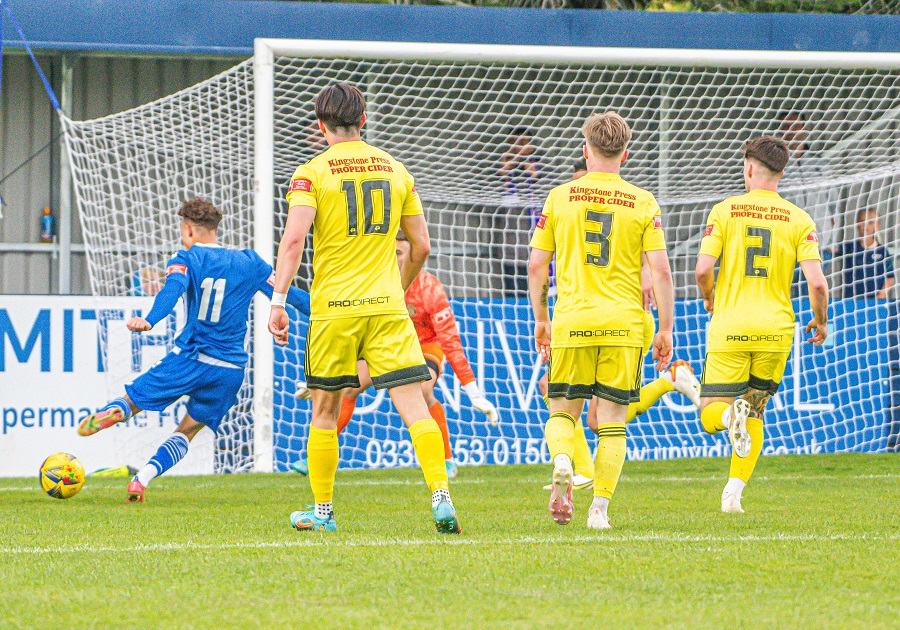 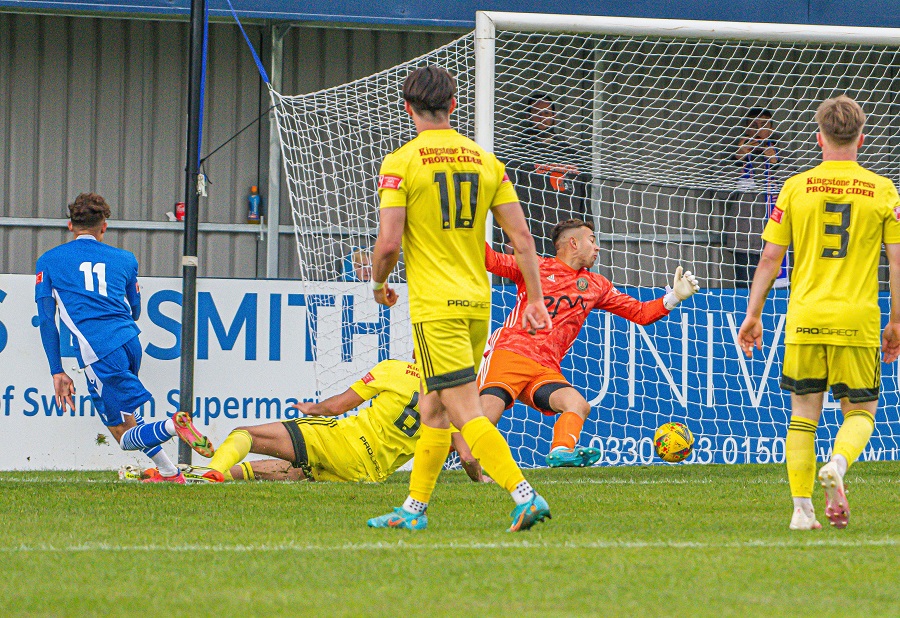 Brad Hooper was replaced with fifteen minutes to go after a tremendous and hard working shift, George Dowling coming on for him and a minute later Conor McDonagh replaced the excellent Kieran Phillips up top. Soon afterwards Ryan Campbell was denied again by Lewis Williams from a free kick that was well hit before the game petered out at the end and Marine saw out the game for the three points. 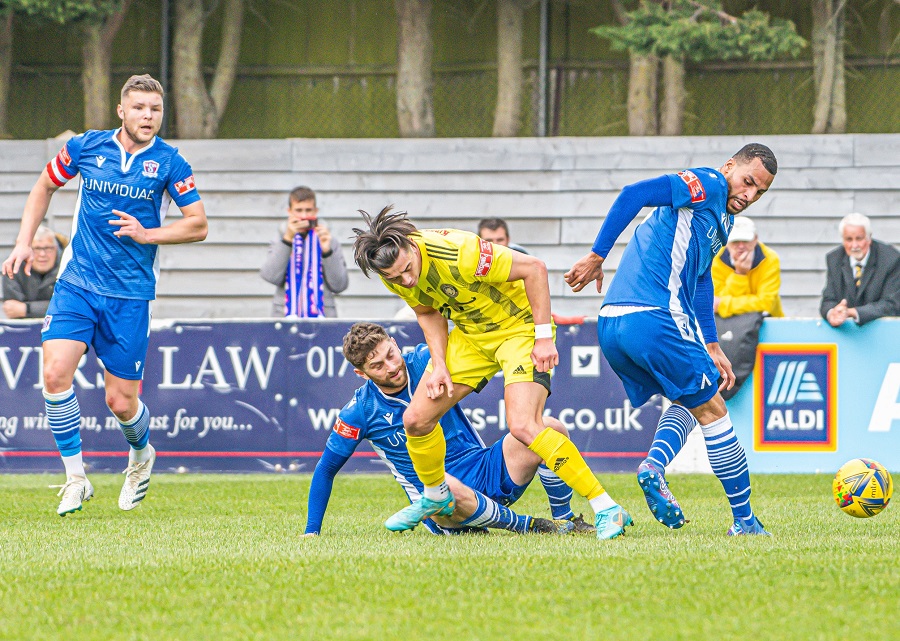 Overall an excellent final league showing of the season which saw Marine briefly move into eleventh place in the league after the final whistle and that was until twenty minutes after the game when a delayed game at Walton Casuals saw them grab a very late equaliser to snatch away the eleventh place and see us eventually finish twelfth in the table. Ironically we had scored sixty-three goal and conceded the same number in the season. With our recent form seeing us win seven out of the last nine matches and finishing the season with four wins out of four, including four away wins on the trot, a very fine end to a tough season with something to build on for better things in the next campaign after a sticky opening start to this one. 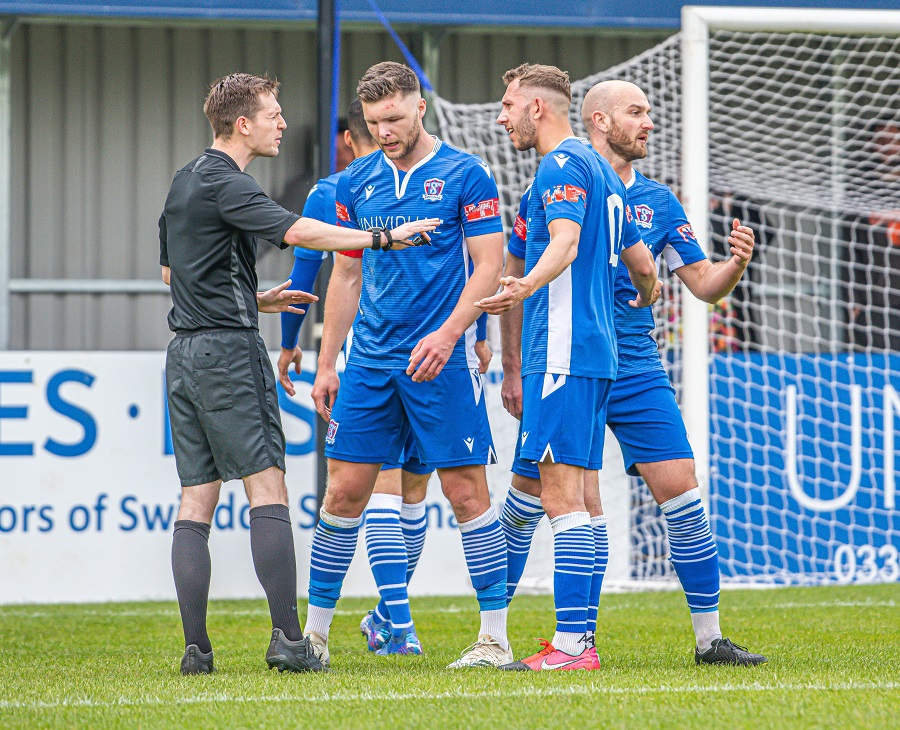 One worthy word of note were the excellent officials who let the game flow and made it an enjoyable game to watch for all. Overall the standard of officiating has been much better in the latter part of the season. There is no doubt that the pandemic break was equally hard for them too as they got back to their normal high standards as time went on. Well done to all the hard working men in black who travel up and down the country in this league. One final match and it’s a big one. The Wiltshire Premier Shield Final at the County Ground, home of Swindon Town FC on the evening of Tuesday March 3rd, a good reward for the hard work offered this season by the players. Lets end it with some silverware boys! SEE YOU THERE!

Fans player of the match: With two assists and clever touches on the ball Henry Spalding grabbed the vote from the fans although everyone on the day would have been worthy of the accolade had it been them! A fine team performance.