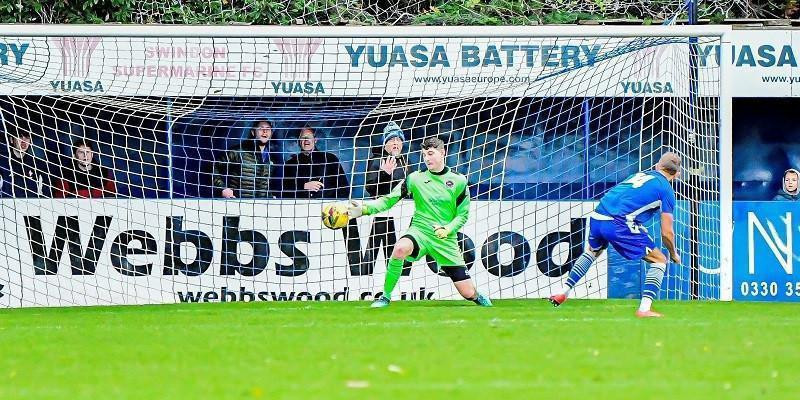 Swindon Supermarine were edged out in a five-goal thriller despite playing for over an hour with ten men. In their latest Pitching In Southern League Premier Division South at the Webbswood Stadium the hosts named an unchanged team after their excellent run of three wins on the trot with Louis Spalding back on the bench after injury. 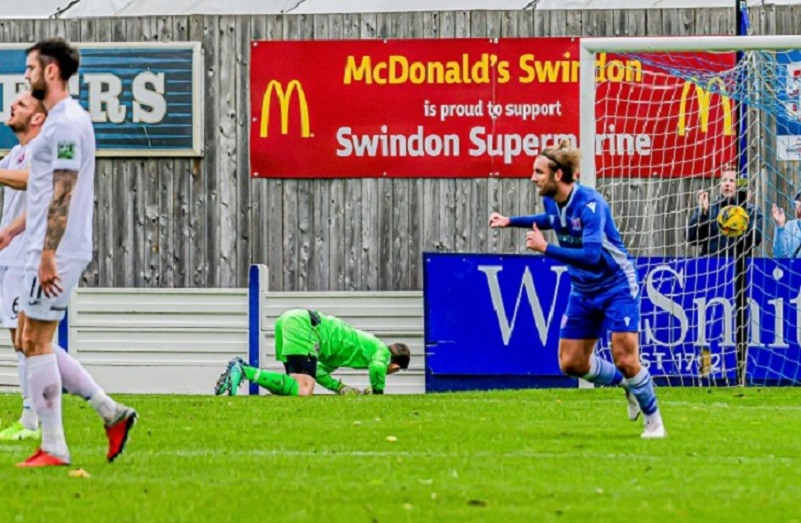 Marine flew out of the traps keeping the ball well and taking the game to their opponents. Ryan Campbell had an early effort blocked on the edge of the box by Shane White but it was no surprise when BRAD HOOPER opened the scoring with a magnificent shot into the far corner of the net just outside the box to give Marine the lead on six minutes.

Skipper Mat Liddiard picked up a soft yellow card for a foul on Rocky Neal soon after. Marine continued to dominate. David Pratt’s fine run was not finished off when his cross eluded everyone. The visitors Connor Riley-Lowe then escaped a booking when he threw the ball down in petulance on thirteen minutes after not being awarded a throw-in. 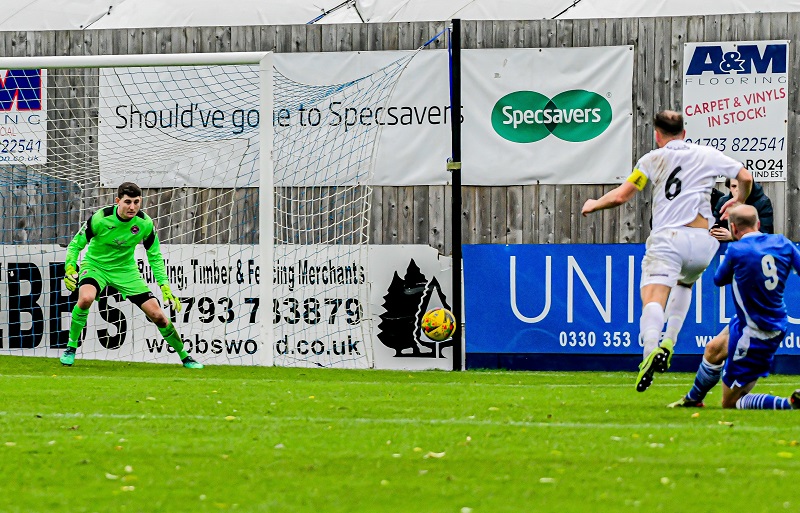 With the wind and the rain getting up Marine kept up the pressure. Conor McDonagh had a shot that deflected for a corner but from that set-piece Liddiard was just unable to get his head on it at the back post. Then Zack Kotwica had a fine swirling effort go just over the top on twenty-one minutes. With the game looking comfortable for Marine then came the event that turned the match. Mat Liddiard mistimed a challenge on Kieran Hayes and was given a harsh second yellow and dismissed, Marine were down to ten! 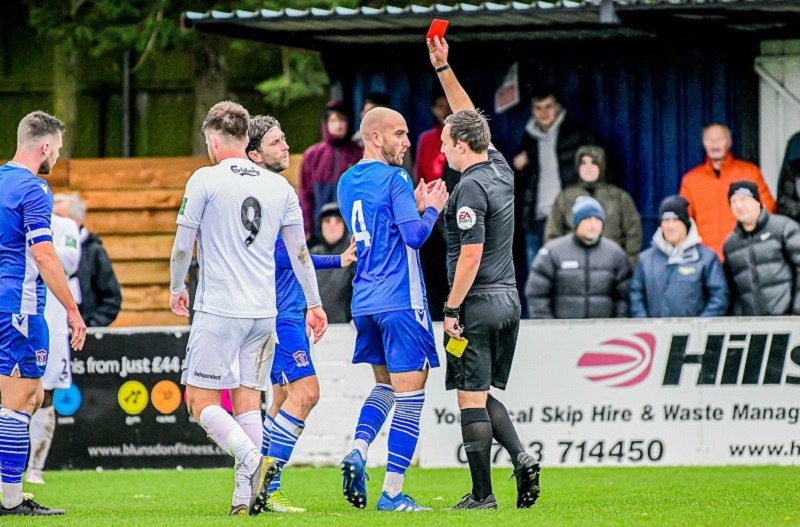 Soon afterwards Pierce Mitchel came on for the unlucky McDonagh who was sacrificed to fill in the gap in the back four on the half hour mark. The pressure of play swung from the hosts to the visitors as Marine looked to stay solid and see out the half. Martin Horsell and Jamie Edge defended well from a corner and Jake Lee put in a good block to break down another attack. The heavens opened just before half time and this coincided with a Marine spell of pressure. 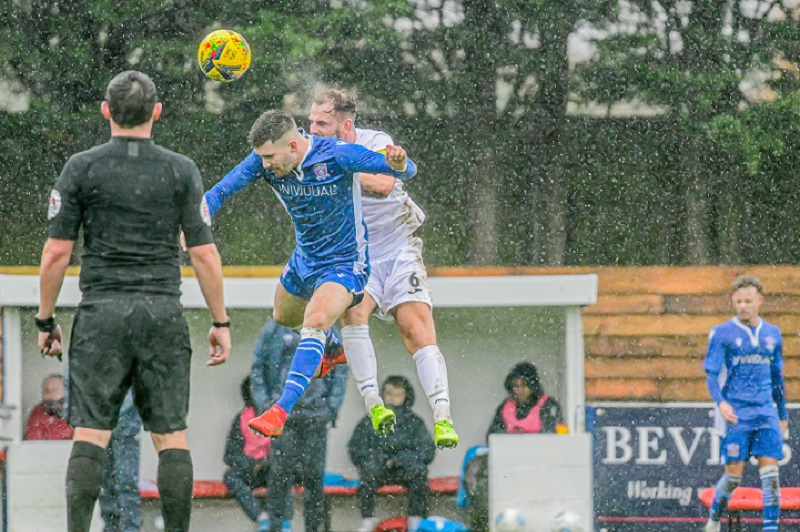 David Pratt broke clear with another good run by was hauled down by Riley-Lowe on the edge of the box to deny a clear goal scoring opportunity. Most of us assumed that he had already been booked and that a red of some description would follow. However it was only the one yellow brandished as it became clear the earlier offence did not see a booking. From the free kick Michael Hopkins effort was superbly saved by visiting keeper James Hamon who pushed it around the post. Marine had a deserved lead but knew they would be up against it in the second half as the legs tired in the wet conditions. 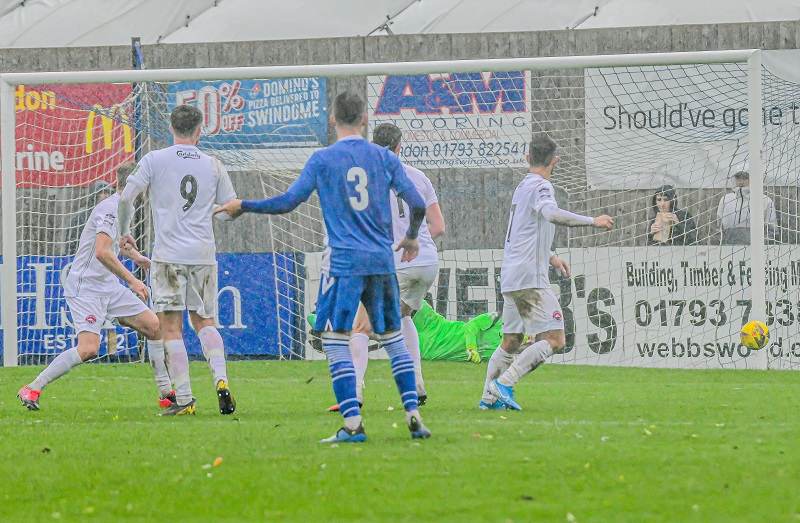 The rain abated as Supermarine battened down the hatches for the second half but despite this the first chance fell to the hosts. Ryan Campbell’s break and cross was just tipped away by Hamon to deny Jake Lee a simple tap in on fifty-four minutes. Martin Horsell was performing heroics in the home goal but from one brave save took a nasty kick which kept him down. 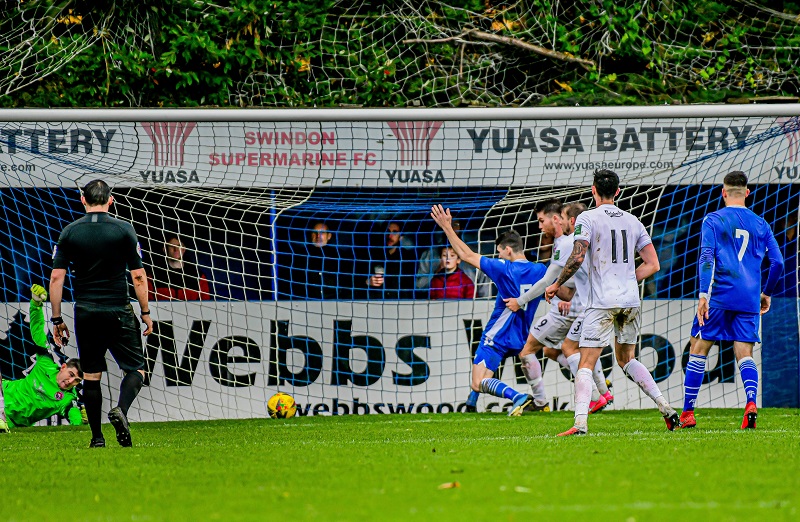 The pressure was increasing from Truro as Pierce Mitchel got one away off the line with 25 minutes left. Horsell was still struggling with that knock and received a second spell of treatment. Truro made a first change with Kieran Hayes off and Alex Battle on. On sixty-eight minutes the inevitable happened. A cross from Shane White on the right was intercepted by JAKE LEE but he could only divert his diving header past the stranded Horsell and into the bottom corner of the net and that it 1-1. 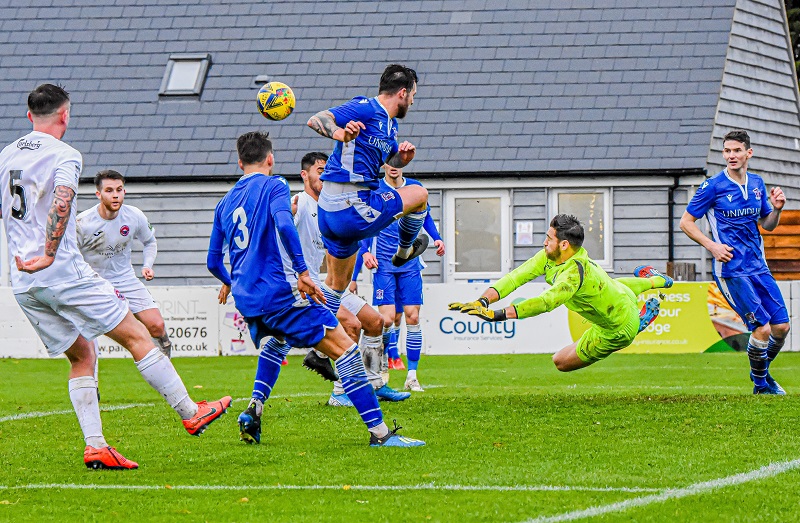 Henry Spalding replaced Zack Kotwica on the wing to freshen things up on seventy-five and minutes later a strong run and cross from Truro wing back Nial Thompson found the Truro substitute ALEX BATTLE who was quickest to react just a couple of yards from goal to give the Cornish side the lead on 78 minutes. 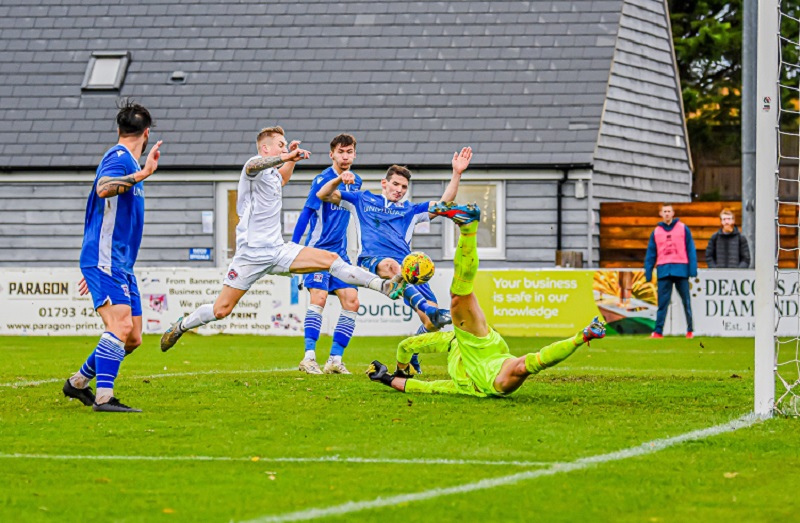 Knowing they now had to gamble on attack the gaffer brought on Harry Williams for Ryan Campbell and the move seemed to have paid off when with three minutes left on the clock. A smart move involving Henry Spalding and Jamie Edge ended after a number of interchanges found the ball at the feet of HARRY WILLIAMS just inside the box and he finished in style to ensure scenes of joy for the home faithful. 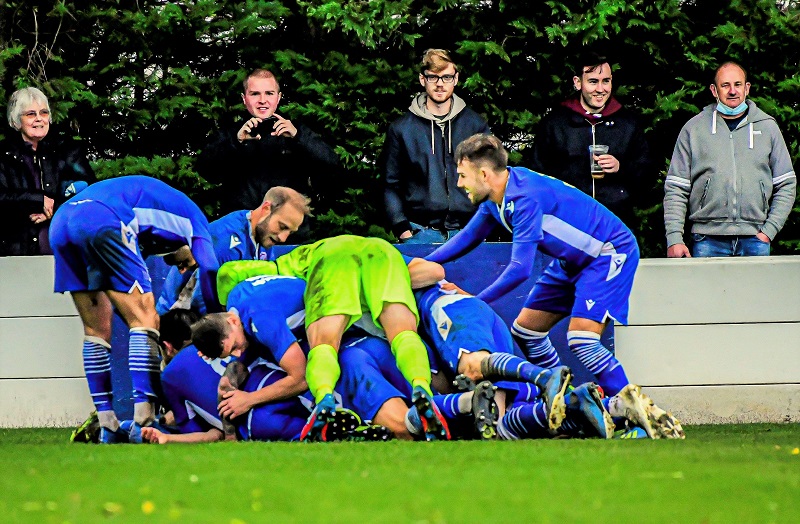 But there was to be a sucker punch and just as the clock turned 90 a nice pass inside the box from Alex Battle found the ball at the feet of striker TYLER HARVEY who was adjudged to have broken the offside trap before toe-poking the ball past the unlucky Horsell who now had three goals put past him although he had a very good game.

A tough end to take, not for the first time this season. Marine had deserved more on the day putting in one of their best twenty-five minutes at the start of the match before the game changing dismissal of Mat Liddiard, defending well and then seeming to snatch a point only to be denied minutes later. Once again Marine will take the positives and move on to the next match sitting in a good position of fifth so far this season. 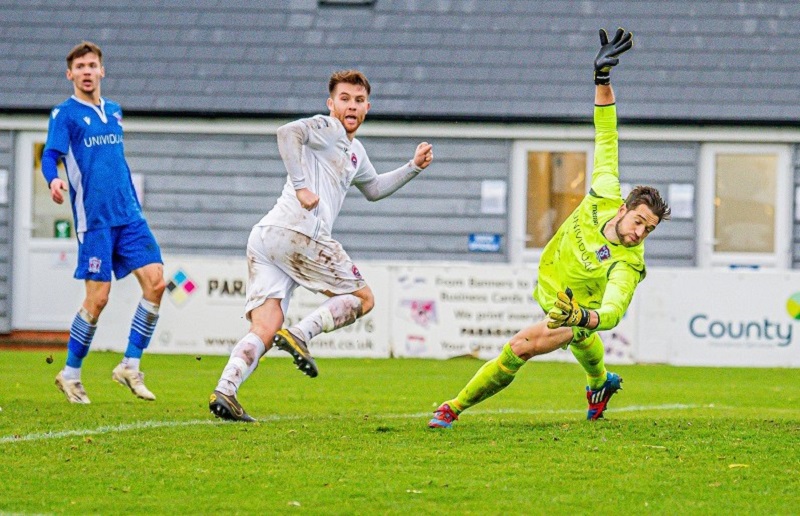 My star man – with a superb individual strike and running hard around the pitch all game Brad Hooper just shading it ahead of Martin Horsell and for Truro’s star man I think wing back Niall Thompson had a fine game and just pipped it ahead of the two strikers who were a handful on the day, Andrew ‘Rocky’ Neal and Tyler Harvey.

Mat Liddiard’s two yellow’s, is the first a foul let alone a booking?