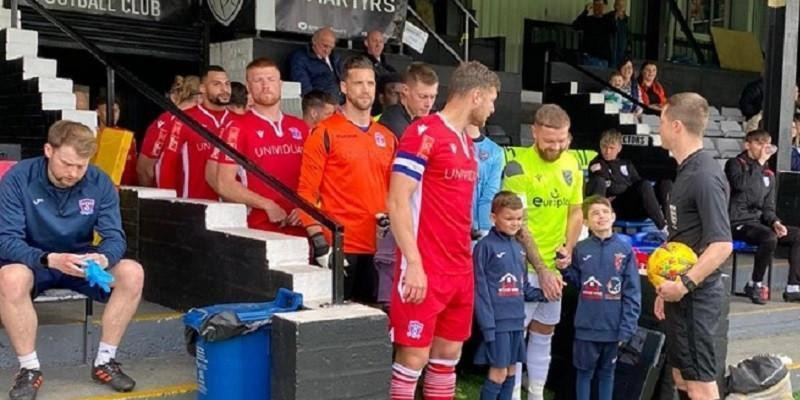 MARINE COME FROM BEHIND TO WIN AT MERTHYR

Marine were on the road for the last time this season as they travelled to relegation threatened Merthyr Town on Easter Monday. With the hosts needing a win to keep their hopes of staying up alive the pressure was very much on for the Martyrs. Marine had the luxury of rotating the squad with the short turnaround of games and Lee Spalding brought back Martin Horsell in goal, George Dowling in the midfield for Bad Hooper, Zack Kotwica and Harry Williams up front in place of Kieran Philips and Henry Spalding who both dropped to the bench.

The match, played on a new 3G surface laid last summer, made a slow start as Marine adjusted to the pitch but it was the home team who showed first when Lewis Powell put the ball in the net but used his hand to control the pass and it was subsequently ruled out. But Marine did not heed the warning signs and on fifteen minutes found themselves a goal behind. KEYON REFFELL collected the ball in midfield and having found a pocket of space ran forward unchallenged to strike the ball hard and low into the bottom corner from twenty yards with Martin Horsell having little chance of saving as the ball whipped off the surface in front of him.

Marine responded well, Mat Liddiard had an acrobatic effort that flew over the bar soon after and possession was very much the visitors now with the home side looking to keep hold of what they had. Slowly inching back as each minute passed this frustrated Marine for the rest of the first half with space hard to find.

At the start of the second period Merthyr made a double change with the loss of Ismail Yakubu who had held the defence together for the hosts the most significant one, the other substitute saw player manager Matt Harris replaced by Kerry Morgan. The first twenty minutes or so of the second half saw a lot of stop start with players staying down injured and the play not really getting going. Lee Spalding made a change after fifty-four minutes with Kieran Philips replacing Conor McDonagh and with a minute Philips was unlucky when his header smashed against the home crossbar.

In fact it was the home team who got the next chance of the half on sixty-eight minutes when Martin Horsell got down well to deny Lewis Powell. A minute later manager Lee Spalding decided to freshen things up with two changes, with Henry Spalding and Bad Hooper entering the fray in place of Zack Kotwica and George Dowling.

And boy did the substitutions work! Within a couple of minutes the leveller came. A ball across the box by the lively Ryan Campbell found HENRY SPALDING at the back post and only a yard or so from the goal. He cut inside one defender onto his right foot then past another defender onto to his left foot and with the keeper going to ground at his feet he calmly placed the ball into the bottom corner of the net for the equalising goal. To their credit Merthyr responded well knowing they had to win the match to keep hopes alive as minutes later the match could have swung the home sides way but Martin Horsell moved quickly off his line to deny Lewis Powell once again as he clawed the ball away after the striker found himself unmarked and in front of goal.

This seemed to dent the confidence of the home side and Kieran Phillips would make them pay on eighty-one minutes. Tyrone Duffus won the ball in defence and passed the ball through midfield to [Harry Williams] (https://swindonsupermarinefc.com/harry-williams) who laid it off to Ryan Campbell who then played an excellent through ball to PHILLIPS. Phillips’ timely run beat the offside trap down the right wing. He outpaced two chasing defenders and with his angle on the goal getting tighter he simply buried the ball into the far corner of the goal, just inside the post, to score his tenth league goal of the season.

But the best was yet to come with a couple of minutes to go. Some excellent team play ended with the ball at the feet of RYAN CAMPBELL pick up the ball some twenty-five yards out and he unleashed a thumping curling effort into the top left corner of the Merthyr goal to seal a superb comeback victory and confirm relegation for the home team. Possibly the best goal of the season without doubt.

A superb performance from all involved with the excellent management skills of Lee Spalding and Charlie Griffin shown over the whole weekend, utilising fully the excellent squad available to them. Well done to them! Also a shout-out to the very good match officials on the day who carried out their roles very well. Thank you also to the excellent hosts who looked after us well on the day. We wish you luck for the future whatever it may bring. A good end to the season on the road with four away wins on the trot and six wins from the last eight lifting Marine towards the top half of the table.

Fans man of the match: Ryan Campbell, was a threat all game and with one assist and a excellent third goal.