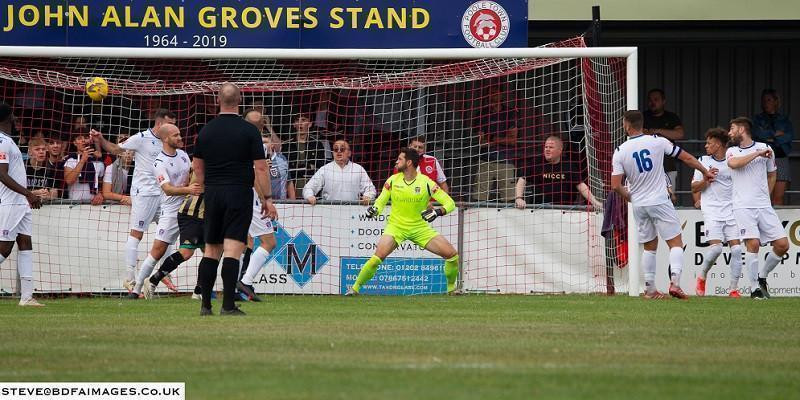 Swindon Supermarine crashed out of the FA Cup at the first qualifying round after a tough draw pitted them with Poole Town at the Tatnum Ground eventually somehow falling by five goals to nil. Marine made a couple of changes from the excellent win over Farnborough on Bank Holiday Monday. Josiah Dunstan made his debut at centre back replacing the injured Tyrone Duffus and Ryan Campbell returned on the wing for Zack Kotwica as gaffer Lee Spalding continued to rotate the front line. The bench also saw a first appearance of Pablo Haysham after his recent injury. Jack Stanley continued to be ruled out with a thigh strain. 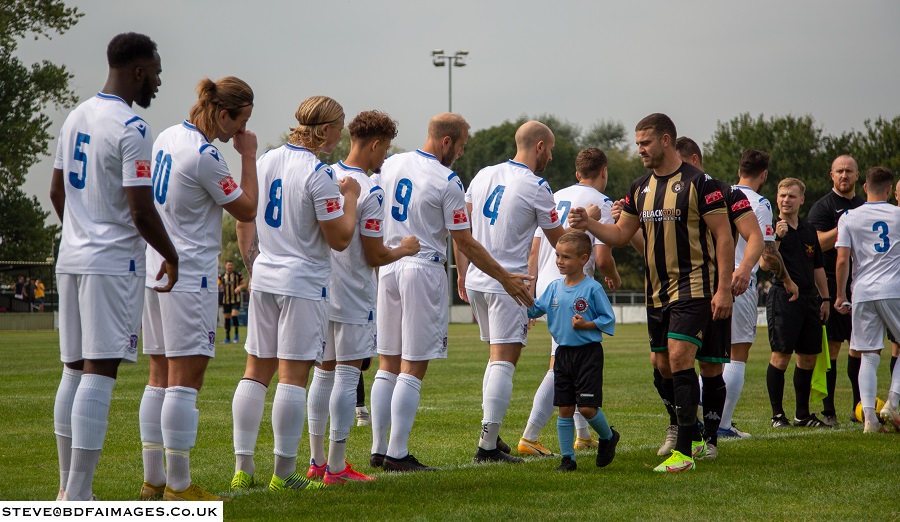 Marine started very brightly in their change strip of all white and the first strike of the game went past the post from Henry Spalding’s. George Dowling fizzed an effort over on nine minutes before a bizarre incident saw a double change with both sides forced to bring on a man after injury in the 15th minute. Poole’s Corby Moore was replaced by Josh Carmichael and Pierce Mitchell, who appeared to tweak a groin departed to be replaced by Brad Hooper who moved into the unfamiliar position of right back. 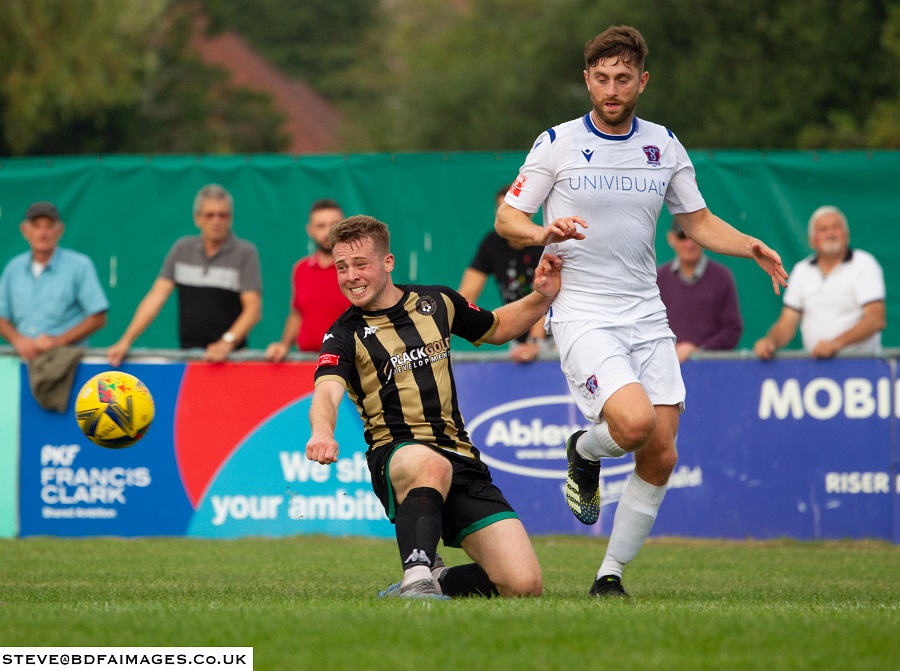 On the 15 minute mark with Marine dominating a clear handball shout was waved away after Conor McDonagh’s cross struck an arm. McDonagh then linked up with Henry Spalding’s down the right but the latter smashed the effort over. Poole then picked up a yellow card after a clear dive just inside the box. Spalding was once again denied close in after his header was somehow cleared off the line just before the half hour closely followed by another chance for McDonagh that deflected just inches wide of the post. 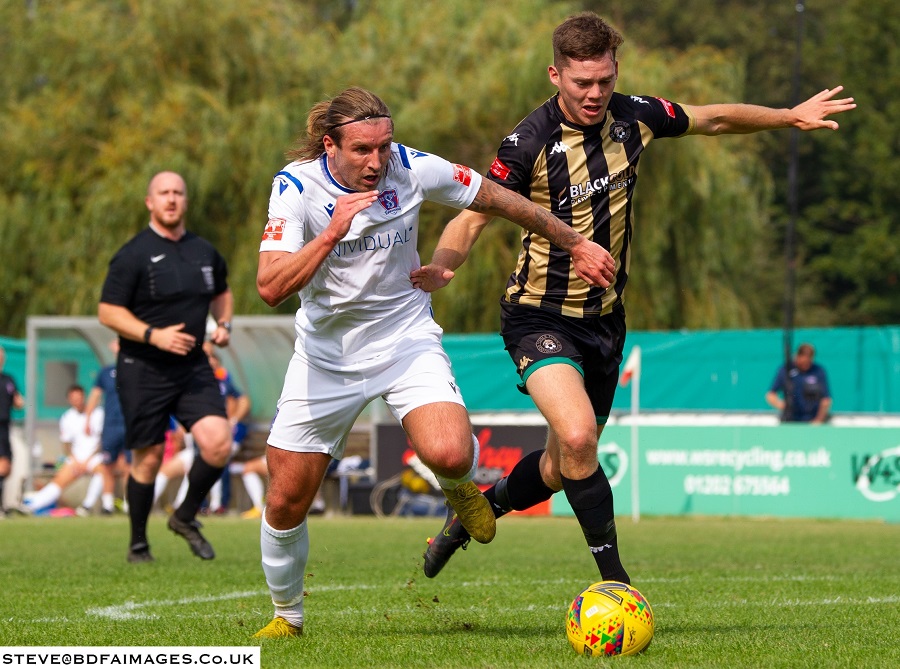 Having rarely moved forward the hosts finally showed some life and gained a corner on 34 minutes. The ball was cleared but fell to the feet of DAN BARTLETT on the corner of the penalty box who with a speculative strike got a slight deflection before hitting the crossbar and in to give Martin Horsell no chance. The home sides first attack and first goal! Poole now had their tails up and Horsell made a excellent one handed save to keep it at one before half time as Marine looked to steady the ship.

A half of good possession but lacking the killer edge up top and somehow Marine went in at half time trailing wondering just how that was? It didn’t deter them from coming out attacking again at the start of the second half. Conor McDonagh’s again came close just heading over Ryan Campbell’s cross with the first attack. 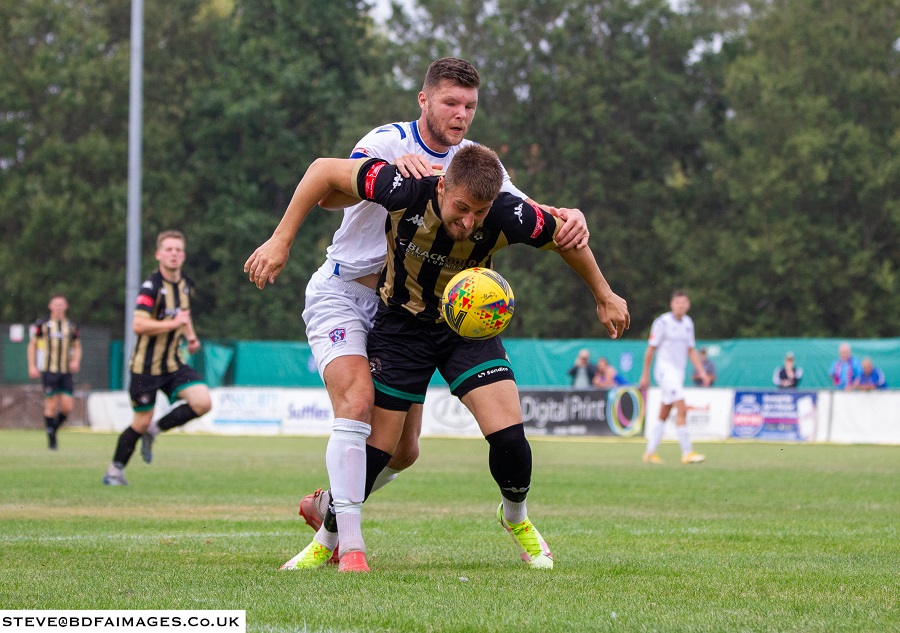 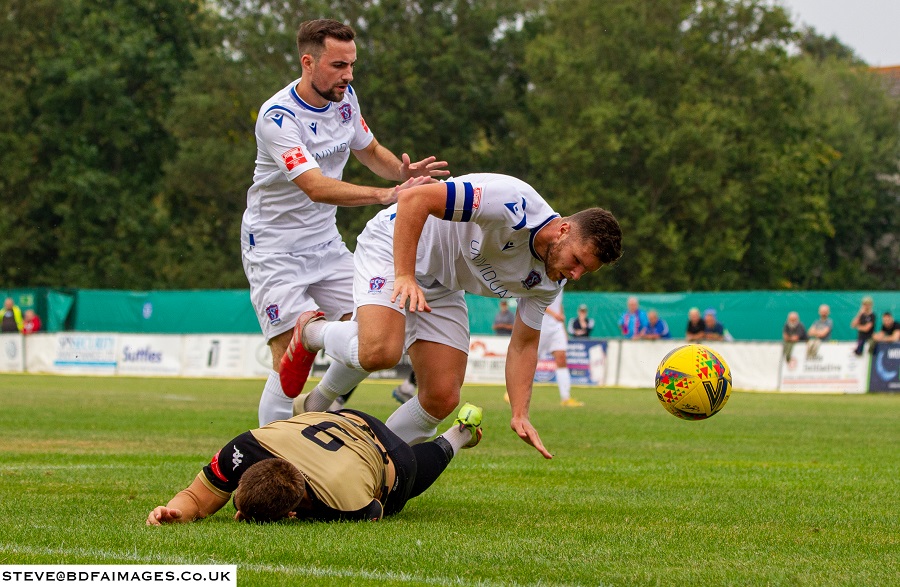 Then came the turning point on 50 minutes. Once again Poole striker Tony Lee went down looking for a penalty and this time the referee duly obliged. It looked extremely harsh on skipper Mat Liddiard. LEE stepped up and made no mistake from the spot and now Marine would be chasing the game. An instant response from Conor McDonagh saw him round the home keeper Mark Childs but somehow a group of defenders combined to clear the ball off the line and away from danger! Lee Spalding rang the changes on the hour bringing on Zack Kotwica for Ryan Campbell but with little going our way in the last 20 minutes the gamble to try and salvage something never came off as Harry Williams also came on to replace Jamie Edge with Henry Spalding dropping back into the centre of midfield. 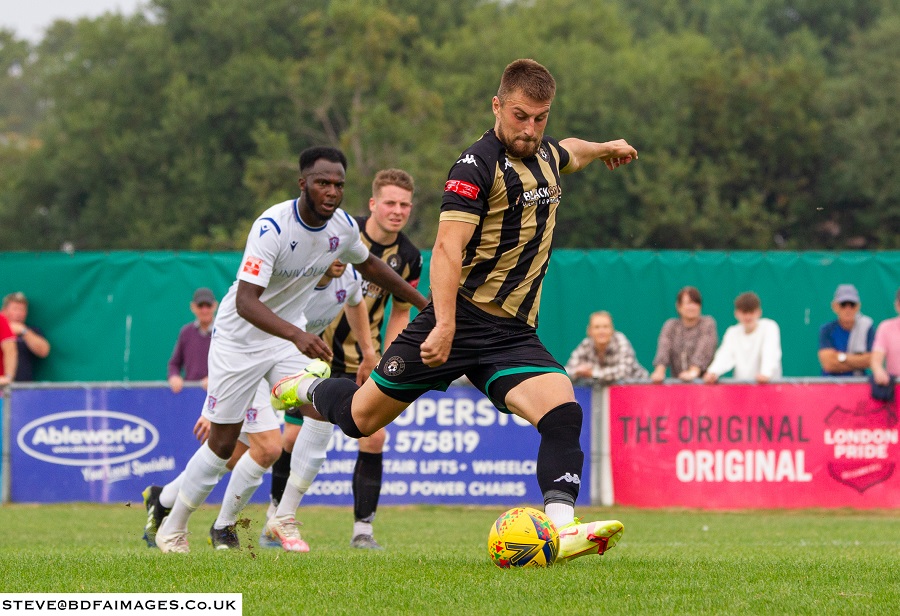 The change didn’t have the desired effect and Poole started to gain a foothold as they were breaking constantly. A shot hit the post and deflected out before another excellent double save from Martin Horsell kept us within a glimmer of hope and to keep the tie alive. Horsell was superb again on 75 minutes with an excellent one handed tip over but it seemed a matter of time before the killer goal arrived and it did with six minutes to go. Marine were caught on the break and LUKE BURBIDGE had the simple task of tapping home under pressure from Lewis Hall. 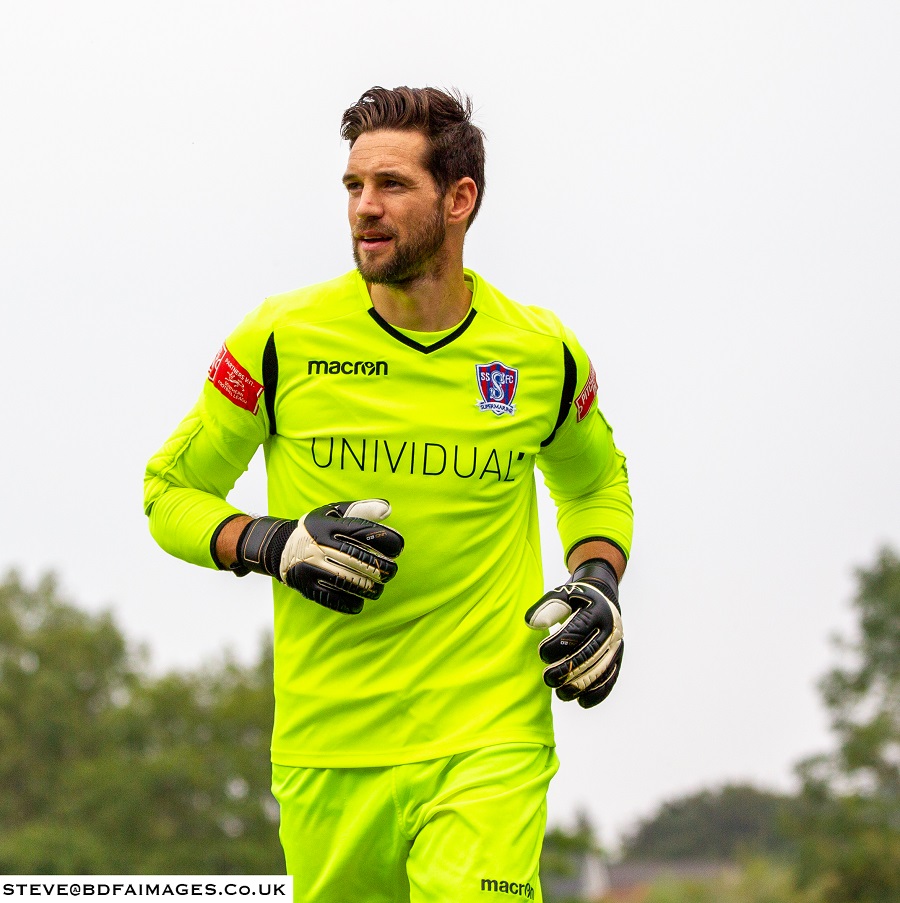 With five minutes remaining George Dowling was forced off the pitch with hamstring injury and Marine had to end the match chasing with ten men having used all their subs. It was to prove costly to the scoreline. On 90 minutes TONY LEE got to a long ball before beating Martin Horsell to head home and deep into injury time the final ignominy came when LUKE BURBIDGE grabbed his second goal and Poole Town’s fifth as Martin Horsell could only help the ball onto the post and into the net after his initial strike hit the same post. 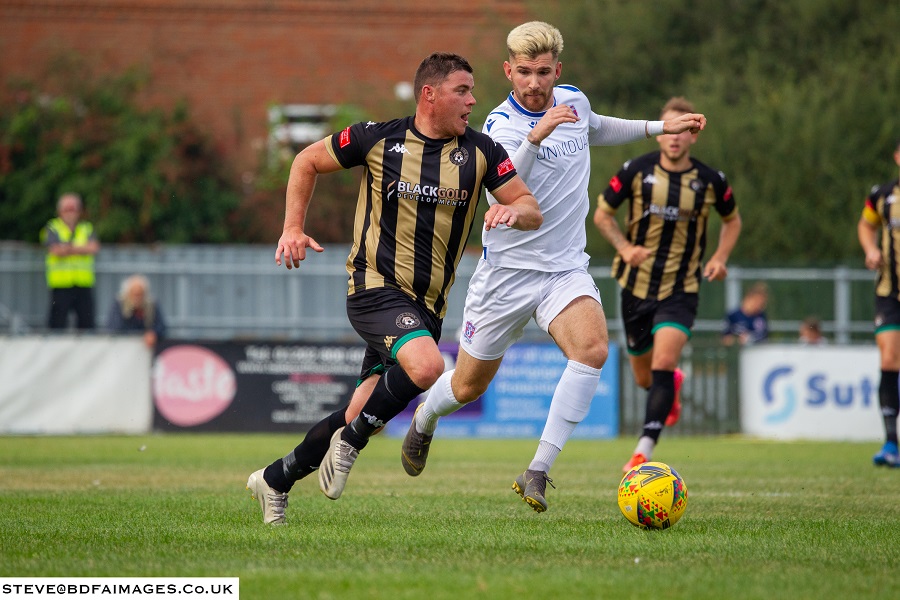 The result wasn’t anywhere near a true reflection of the performance but showed more how Marine had tried to chase the game and sadly ended up totally out of luck on the day with goal-line clearances, injury and decisions going against us. Big shout out to the fans who went down and supported us on the day contributing to a healthy attendance. More cup action to come on Tuesday at home when we take on lower league opposition in Larkhall Athletic hoping to put the woes of today behind us.

Fans player of the match MARTIN HORSELL and BRAD HOOPER

Match Highlights & Reaction from Charlie Griffin **
Access to the highlights from Marine’s matches can be viewed on a monthly subscription of just £2:50. Click the ’match highlights’ above to subscribe.