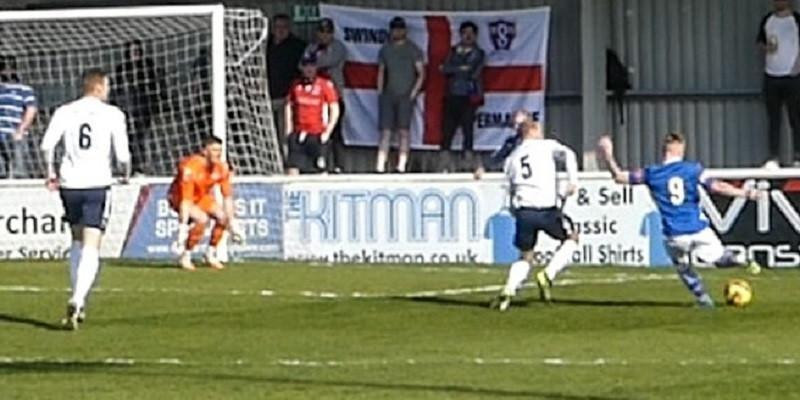 Marine were back out on the road again on a beautiful sunny Saturday afternoon as they travelled down the M4 to take on “local” rivals Yate Town who were pushing for a spot in the playoffs. Having made the Wiltshire County final in midweek Marine arrived full of confidence and manager Manager Lee Spalding opted for just the one change Jamie Edge replacing Matt Britton in midfield with Conor McDonagh returning after illness on the bench and George Dowling missing the match having become the latest player to be stricken with cold and cough.

Yate Town started confidently early on but the Marine back line were dealing well with the early pressure. The first break out saw a cross from Henry Spalding dropped by home keeper Andy Hannah, who would go on to have a shaky afternoon, but Kieran Philips was unable to pick up the loose ball. The best chance of the game came for the hosts soon after on nine minutes when an excellent cross from Will Tunnicliff in was headed over the top of the crossbar by James Harding from close in.

Marine were sucking up the pressure well and from another excellent long pass from the midfield by Tom Sharpe saw KIERAN PHILLIPS score the opening goal as he outpaced the home defenders just inside the visiting half. He promptly drove on into the penalty box and bulleted a shot into the bottom far corner of the net. The Bristol Rovers loanee is looking back to his best after his recent illness as he made it fourteen goals for the season in the nineteenth minute.

A Henry Spalding corner was just flicked away by Hannah as Marine gained in confidence before Tyrone Duffus and then Kieran Philips peppered the away goal with chances just wide of target. Philips and Harry Williams were causing problems to the Yate back line as the Marine pressure increased and home keeper Hannah continued his awful afternoon by kicking the ball straight out to Phillips on thirty-two minutes. He played a neat pass to HENRY SPALDING on the left side who had a lot to do but with a touch of class and a cute finish as he fired low past Hannah promptly made it 2-0 to Marine and a tumbling celebration to boot in front of the now delirious travelling Marine fans.

Yate were offering little to test the Marine back four but a slip by Pierce Mitchell almost set up striker James Harding in but he showed the hard work of the team on the day by running back and putting in a top tackle to win the ball back from his mistake. With time ticking towards the break Philips broke away again down the right and floated an excellent cross into the box met by HENRY SPALDING with a header into the bottom near corner of the net for his twelfth goal of the season. A Cristiano Ronaldo celebration saw the attacker earn a booking as his shirt flew into the air!

Without doubt the best half Swindon had produced this season and they would look to keep it going in the second period. Harry Williams had an early strike saved by goalkeeper Andy Hannah before Henry Spalding tried to grab his hat-trick soon after but on this occasion Hannah had his handling right. Jamie Edge picked up a booking for a tug on Joe Tumelty before Yate changed things up on the hour pushing tall defender Matt Bower up top after a double substitution.

Marine responded in kind with Matt Britton replacing the tiring but effective Tom Sharpe with twenty-seven minutes to go before Yate’s Joe Tumelty hit a rasping effort from a free kick towards the corner but Martin Horsell was determined to keep his sheet clean and pulled off a superb full length save. Conor McDonagh replaced the superb Kieran Philips with twenty minutes left and Zack Kotwica soon joined him replacing the equally brilliant Henry Spalding. Five minutes Harry Williams was booked for a late challenge on Liam Angel before a flurry of final chances with the time ticking down from Marine.

Zack Kotwica and Harry Williams hit good efforts at goal but Hannah redeemed himself slightly with two excellent stops. But in reality, all the hard work had been done in the first half and a solid display from the defensive unit got their deserved clean sheet in the second half, keeping the Yate front line very quiet indeed and earning their seventh shutout of the season.

Fans man of the match: Kieran Philips but this was very much a team effort with every player playing their part towards this victory. Not one player underperformed, and every man left it all out there on the pitch. Very promising signs for next season making it three wins and from five and only one defeat. Marine will now look to push on and gain as many points as possible and push up the table as far as they can.