Hayes started the match the quickest and with seven minutes on the clock they were awarded a free kick near on left hand corner of the Marine area. Hayes midfielder and long-time servant, Scott Donnelly fired the ball past the Marine wall only for his goal bound effort to be pushed wide by Marine stopper Martin Horsell with an excellent save.

Five minutes later Hayes were taking the lead when Karl Cunningham and Omar Rowe combined before the later slipped the ball through to Francis Amartey to score. Having bundled his way past defender Matt Coupe before getting the better of keeper Martin Horsell with a block tackle. He then looked up and calmly placed the ball into the far corner of the Marine net with only Louis Spalding standing in his way on the goal line.

Marine then responded when they created a good chance minutes later when Jamie Edge fired in a corner from the left, home keeper Dan Lincoln got his fists to the ball but it fell to Henry Spalding who saw his shot blocked wide by Omar Rowe. The resulting corner being bundled away firstly by Lincoln and then Rowe again.

Francis Amartey almost had another goal after 22 minutes. After feeding the ball to fellow striker Hassan Jalloh in the area the Hayes striker held of four Marine defenders before his shot was eventually blocked by a melee of Marine defenders. 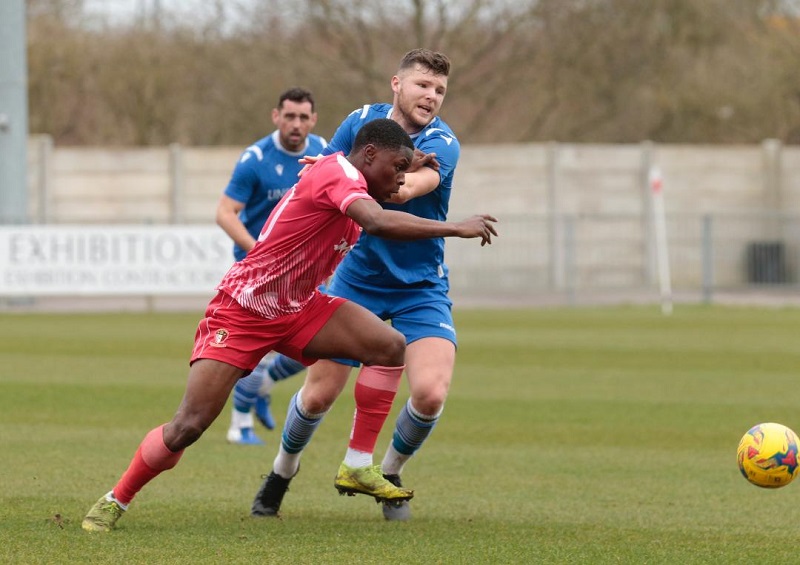 After thirty minutes a Jamie Edge free kick caused consternation in the Hayes defence and the ball fell to Brad Hooper, but he could only drive his shot over the bar. Just a few minutes later Marine nearly scored an equaliser. Hooper, who appeared to foul Odelusi in gaining possession, passed the ball to Ryan Campbell who was on the edge of the box, Campbell’s well struck left-footed strike beat the home keeper, but the ball slid inches wide of the post.

Hayes moved quickly forward and the dangerous Amartey turned Mat Liddiard before crossing the ball that was cleared only to Hayes’ winger Cunningham who sent ball to the far post where Omar failed to reach the ball for what was a good opportunity.

The start of the second half saw Marine have a lot of the ball without really troubling the home defence. Then after sixty minutes Conor McDonagh collected the ball inside the penalty box, but he could only send his shot into the side netting. Minutes later home keeper Lincoln’s superbly tipped Liddiard’s header over the bar from a Henry Spalding corner. 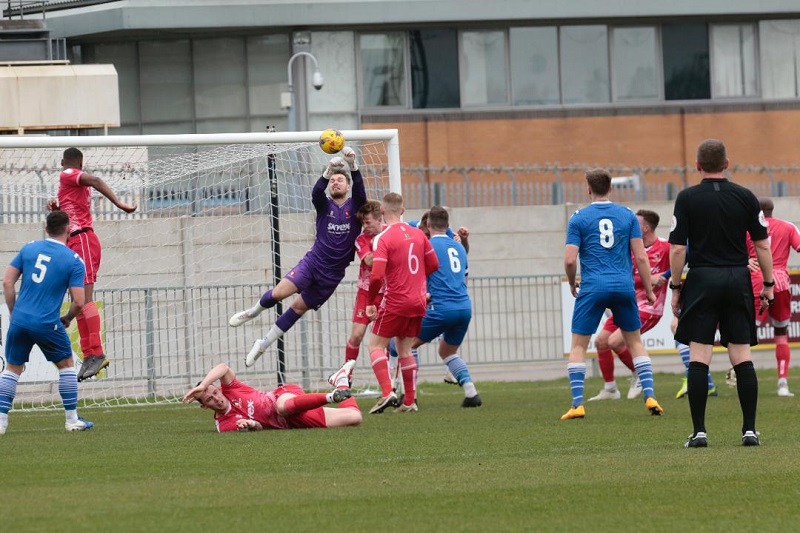 With 74 minutes Hayes defender Joe Grant made his way down the right side and his centre was half cleared to Scott Donnelly who sent the ball back but never trouble Horsell. Harry Williams then fired just wide of the far post after a neat one-two with Hooper with the on rushing McDonagh just failing to get to the back post for a tap-in.

With minutes left another chance for Marine as ball dropped inside the Hayes six-yard box only for defender Callum Buckley to clear the ball practically of the goal line and then seconds later the referee blew the final whistle.