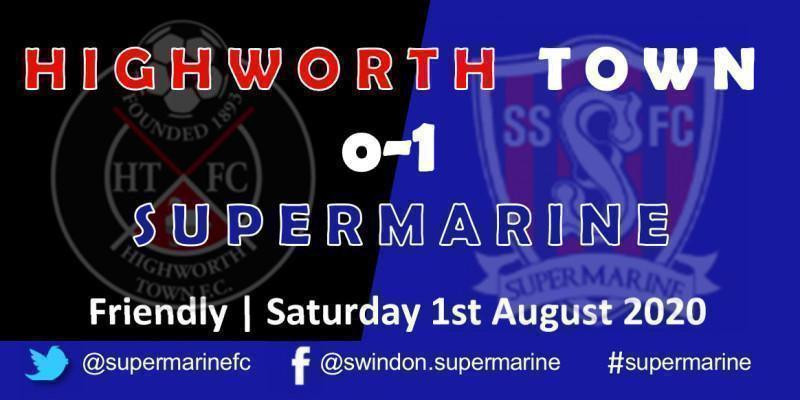 Marine got their pre-season underway behind closed doors at local rivals Highworth Town from the Southern League Division One South.

With new signings Jack Stanley and Jake Lee starting the match Supermarine would effectively field almost two separate elevens for each half except for keeper Martin Horsell and skipper Mat Liddiard who battled on for the whole ninety minutes.

Inevitably there was a lot of rustiness on display but the first effort of the game came from new man Stanley which was quickly followed by another shot from the trialist up top. Ryan Campbell was the next to test the keeper on 15 minutes as Marine dominated possession and chances. Highworth had their first attempt after Callum Parsons headed over a corner before Campbell again broke through only to finish weakly.

Following the first hydration break a nasty late challenge by Parsons on Horsell saw the referee brandish a rare yellow card in a friendly but in all honesty he Highworth man can count himself lucky it wasn’t a more severe punishment. Approaching half time Jamie Edge found he couldn’t run off a knock and the returning Lee Marshall came on. At half time then it was 0-0 with Marine having the bulk of possession but looking a bit rusty and lacking the cutting edge.

A completely different eleven started the second half with a further 8 changes including the new man up top from Gloucester City Zack Kotwica who made his presence felt early on when his cross was headed just wide by Conor McDonagh.

But it was Highworth who had the best chance to open the scoring when Wood drove the ball wide having broken clear – a real let off. The hosts good spell continued as the subs struggled to find their feet when Parsons went down theatrically in the box but the referee rightly waved it away. Another debutant in Tommy Ouldridge the young midfielder had a couple of long range efforts off target before McDonough went close again with his shot deflected wide.

At the second water break it was anyone’s game but it looked that Marine were the most likely to get the vital goal. Kotwica was looking lively and made a good run with 20 minutes to go but dragged his shot wide. Marshall followed that up with a stinging shot but straight at the keeper. The pressure was building when McDonough almost set up a chance for Rhys Wells after a good run but he couldn’t quite get on the end of it.

Then just as it looked as if the goal would not come it finally arrived with 3 minutes to go. Following up from a blocked corner ZACK KOTWICKA unleashed a moment of magic cutting in from the left and producing a fierce shot which flew in off the underside of the bar.

It was a worthy matchwinner and new boys Stanley, Lee, Kotwica and Ouldridge all putting in good showings a very promising start to the pre-season.