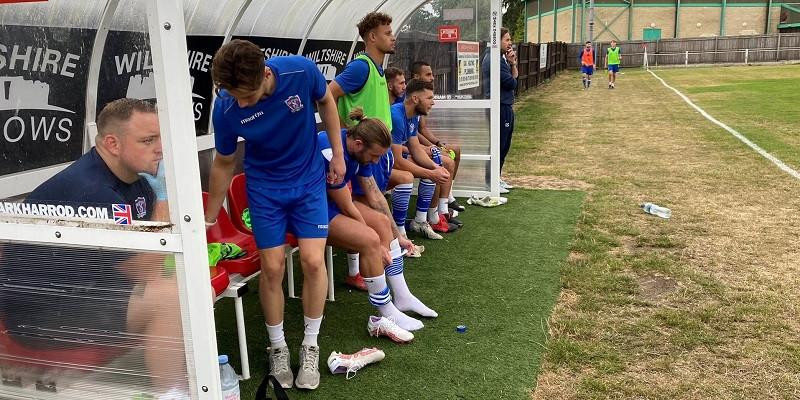 Marine made the short journey down the A361 to take on local rivals from Southern League Division 1 Highworth Town at the Save-On-Tyres Stadium on Friday night. Manager Lee Spalding gave the central defensive pair of Tom Sharpe and former Highworth Town defender Leon Morrison a run out with another trialist given a chance at centre forward. Missing from the squad were Henry Spalding and new signing Wayne Nderemani who were both on holiday and both Tyrone Duffus and Jack Stanley who are suffering with an abdominal strain.

The home side made a strong start with a very early penalty appeal waved away. Not long into the game Zack Kotwica sent over a lovely cross that was met by the unmarked James Harding but his header was well held by young keeper Bailey Leach before Harrison Edwards shot whistled wide for Highworth. The second goal scoring opportunity for Marine came on the fifteen minute mark Tom Sharpe headed just over from a corner. The Worthians were looking the better of the two sides in the first half hour although defending deep and denying space whilst quick on the counterattack. Reagan Cook almost broke the deadlock on twenty-seven minutes when he broke away on the right wing but Connor Johns made a great one handed stop to keep the scores level. James Harding had an excellent opportunity shortly afterwards when he met a cross but headed straight into the home keeper Bailey Leach’s hands.

Shortly afterwards Zack Kotwica hit a fierce drive over the top of the crossbar just after the half hour with George Dowling quickly following this up with a long range effort that flicked the bar on the way over. A dangerous cross from the Highworth winger Reagan Cook ended up missing everyone in the Marine penalty box late on in the half when only a touch was needed to score, before James Harding fired wide of the target just before the break.

A strong half for the hosts and Marine opted for five changes to alter the pattern for the start of the second half, with Jamie Edge, James Harding, Zack Kotwica, Tom Sharpe and the trialist coming off for (Harry Williams](https://swindonsupermarinefc.com/harry-williams), Brad Hooper, Ryan Campbell, Conor McDonagh and Mat Liddiard

There was an instant impact for Marine as a through ball from Lewis Hall was met by a weak header from a Highworth defender back to his goalkeeper and RYAN CAMPBELL intercepted the header and rounded the oncoming keeper Leach to put the ball in the empty net within seconds of the second half starting. The game then had a spell of possession football from Marine were now dominating the play and Highworth defending deeper.

George Dowling’s in swinging corner was well punched away by Leach but on sixty-eight minutes a second goal came along for Marine. The move started with Leon Morrison passing out from the back to Sam Turl who in turn fed the ball out wide to Ryan Campbell. Campbell then slid the ball through the Highworth defence before a neat turn and top class finish by HARRY WILLIAMS who gave the home keeper no chance as he rifled the ball into the top corner of the net. And then it two in two minutes for the lively forward who was looking very sharp as Sam Turl’s effort came back to HARRY WILLIAMS who drilled the ball low into the bottom corner of the goal.

Conor McDonagh could have made it four on seventy-two minutes but somehow couldn’t get a proper connection on the ball in front of the goal. Latest signing Sal Abubakar was brought down with fifteen minutes to go just inside the penalty box with a turn of pace that deceived the Highworth defender. Abubakar stepped up to take the kick himself but smacked his shot off and over the crossbar.

Another George Dowling free kick was deflected out for a corner on eighty-two minutes and from the resulting set-piece MAT LIDDIARD rose the highest at the back post and his powerful header squeezed under keeper Bailey Leach and off the post and the back off the keeper leg for Marine’s fourth goal. Marine made five goals to nil with four minutes left on the clock. GEORGE DOWLING’S low free kick went round the wall and in off the post for the fifth. A strong second half showing as the hosts weakened with their fitness towards the end. A useful exercise to get more minutes in the legs and next up is newly promoted to the National League South, Taunton Town who come to the Webbswood Stadium Tuesday night.

Media Star man: Sam Turl, who played the whole game and was equally adept in attack and defending, a powerhouse display from the right back.