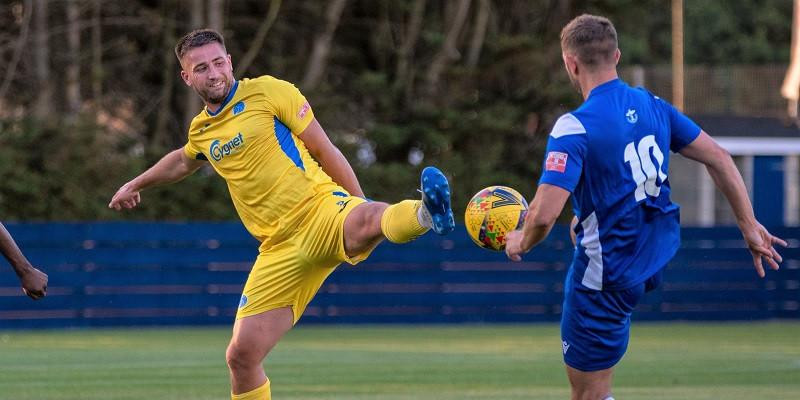 Marine took on newly promoted National League South side Taunton Town on Tuesday evening in their penultimate preseason outing before the start of the season n August 6th. Marine were missing a few key players with injury, illness and holidays and with a tough evening was due but some good news saw the return of Tyrone Duffus after an injury hit pre-season with a trialist getting another chance up top. Missing were Tom Sharpe though illness, Mat Liddiard, Henry Spalding, Brad Hooper and Wayne Nderemani who are all on holiday.

The first 30 minutes saw Marine defending well and matching their higher league opponent with little fuss, with a few chances coming for Ryan Campbell who got behind the Taunton defence a few times in the first quarter of the game but Marine never created a clear goal scoring opportunity. The first effort that come near the goal was a fierce drive by George Dowling which went over the top from a free kick.

On thirty-six minutes Taunton caught the Marine players on the break and put a nice team move together with a neat interchange of passes which was finished off close in by OLLIE CHAMBERLAIN to give the Peacocks the lead with their first shot at the Marine goal. Defender Leon Morrison tried to create a response soon after but could only head over George Dowling’s in-swinging corner. Just before the break a tough night for the trialist striker ended when he limped off with a hamstring injury to be replaced by Conor McDonagh.

Come half time and the visitors clinical finishing proved to be the difference. Changes were a plenty early in the second period with Jack Stanley coming on at the break in a midfield role for George Dowling, along with James Harding and Zack Kotwica for Sal Abubakar and (Harry Williams](https://swindonsupermarinefc.com/harry-williams)after fifty-five minutes.

Jack Stanley stung the palms of keeper Will Buse soon after arriving but this proved to be a false dawn as OLLIE CHAMBERLAIN sent a low free kick ‘through’ the wall and into the bottom corner of the goal with keeper Connor Johns just unable to keep it out on sixty-five minutes, that was two shots on target and two goals for Taunton. Taunton substitute Ross Stern then drew a top level save from the Marine custodian before Sam Turl forced an equally good stop from Taunton substitute keeper Lloyd Irish for the visitors.

A late change for Marine saw a trialist keeper replace Connor Johns and he was left grasping thin air when a superb shot from another Taunton substitute HARRY WARWICK flew into the top corner of the net from the edge of the penalty box just before the final whistle. A harsh scoreline on Marine as for the most part they had defended well but the well organised Peacocks back line kept the Marine attack under wraps and they look in line to do well in their first season in the National League South.

The final preseason outing comes on Saturday at Royal Wootton Bassett, kick off at 3:00pm.

Media Star man: Leon Morrison who played against a couple of very experienced and capable centre forward’s over the 90 minutes and played extremely well.