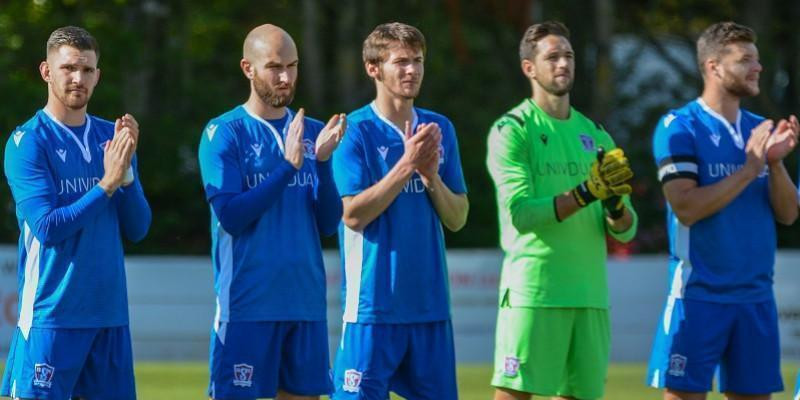 MARINE OUT OF LUCK AS TIVVY HIT A SUCKER PUNCH 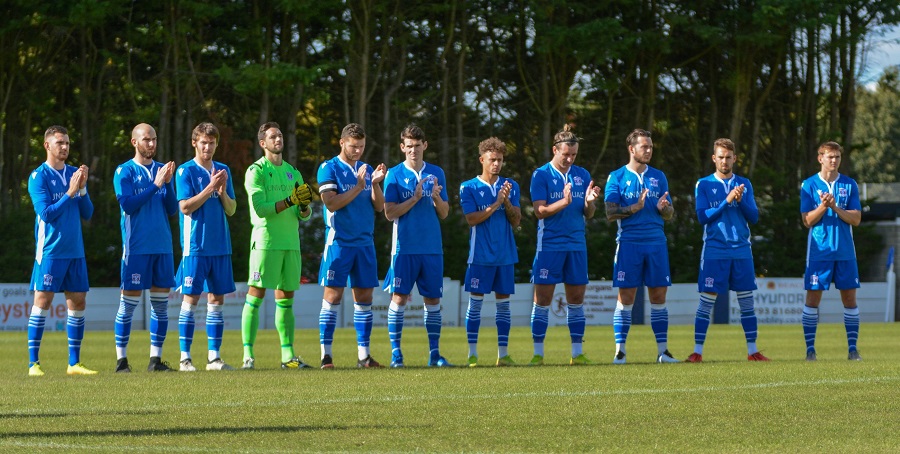 Swindon Supermarine and Tiverton Town had an early top of the table clash at the Webbswood Stadium on Saturday in the PitchingIn Southern League Premier Division South. Marine made some tactical and personnel changes with Mat Liddiard moving into the centre of midfield alongside Michael Hopkins with Pierce Mitchell moving into centre back and Jack Stanley coming in at full back. Brad Hooper and Harry Williams dropped to the bench. 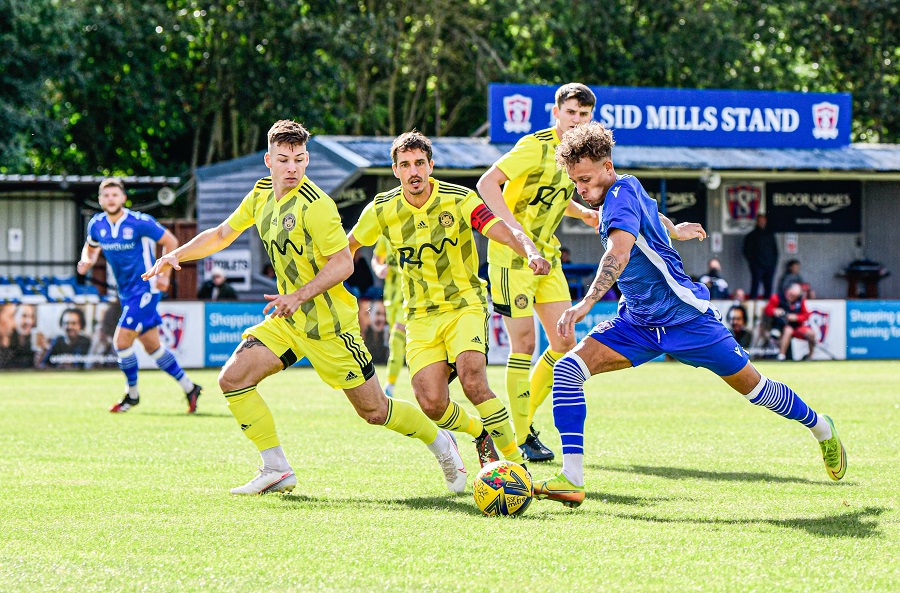 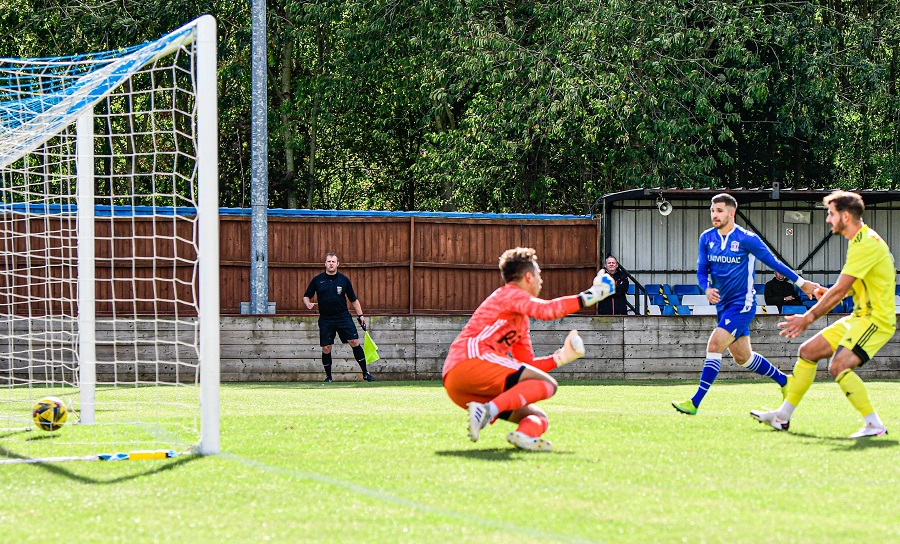 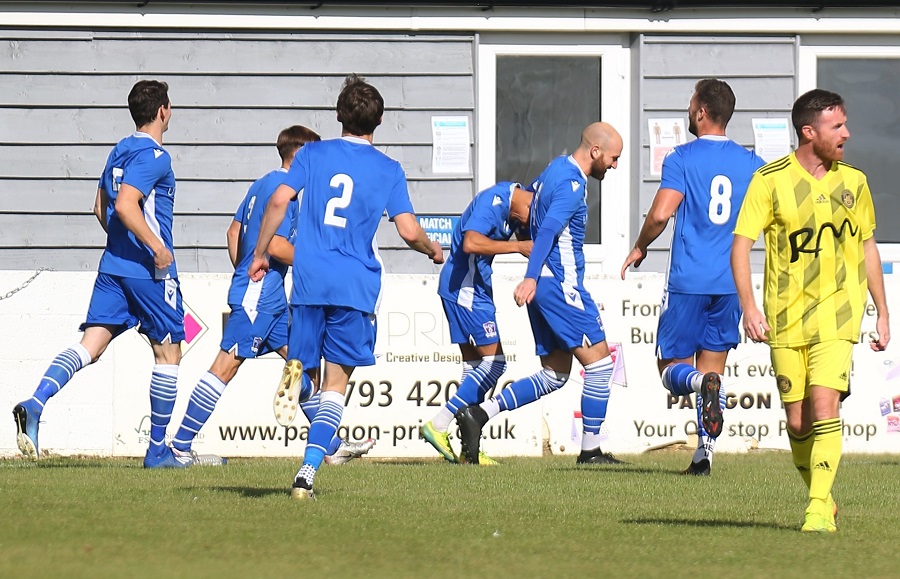 The changes seemed to have the right effect as Marine took the lead from the first attack. Conor McDonagh and Ryan Campbell linked up and CAMPBELL hit a fierce strike through the keeper’s legs. Michael Hopkins nearly made it two just a minute later firing wide from just outside the box. 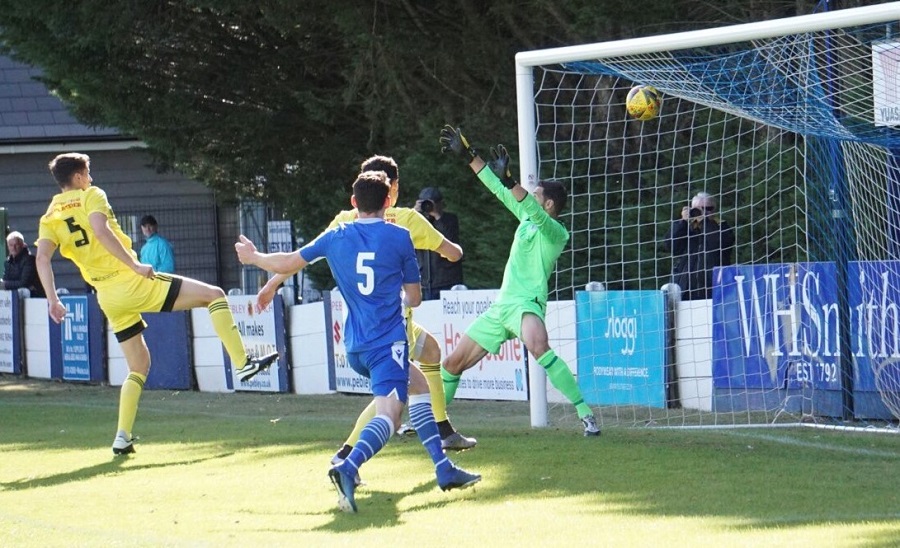 Tiverton slowly settled down and the game became an end to end affair between two quality teams. Marine but together a lovely team move on 13 minutes but Hopkins blazed over when the route to goal opened up. With the game being so open It was no surprise when the visitors did level on 17 minutes. A fine cross from the left by Jordan Bastin at the second attempt was volleyed home spectacularly by MICHAEL PECK giving keeper Martin Horsell no chance from very close range . 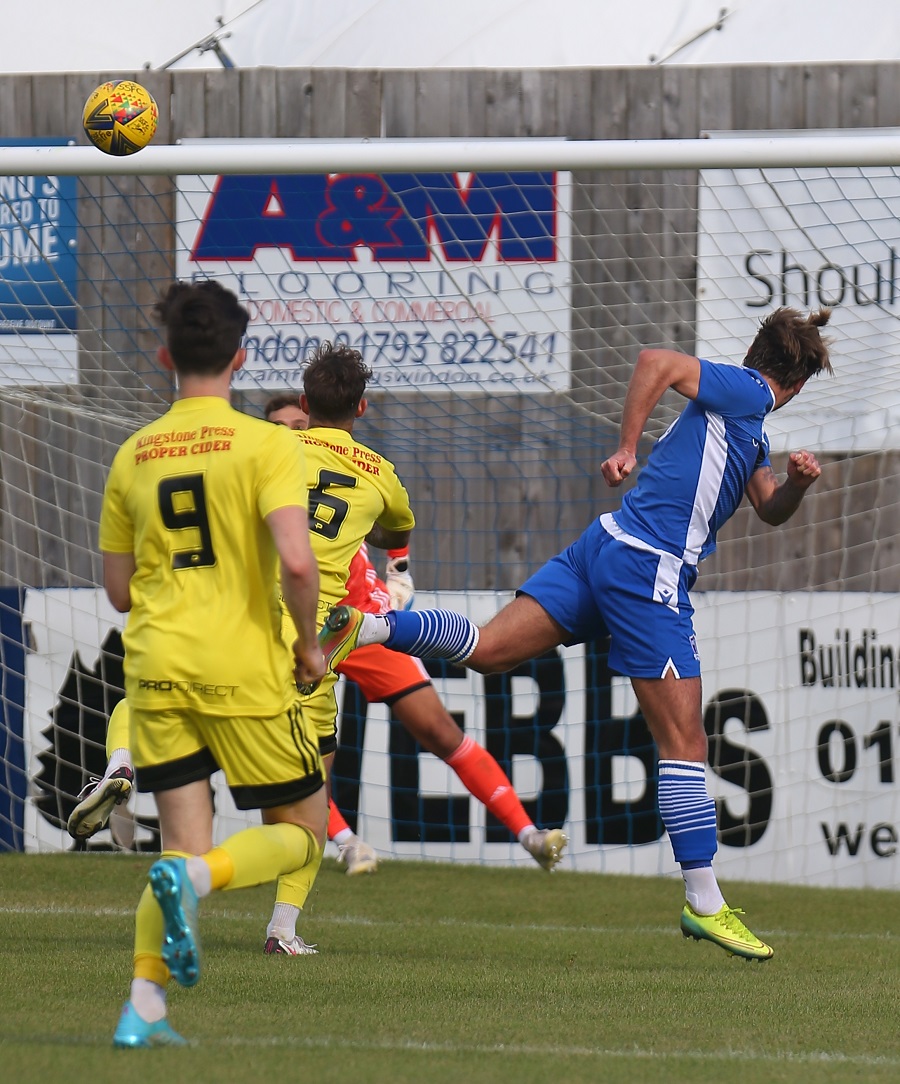 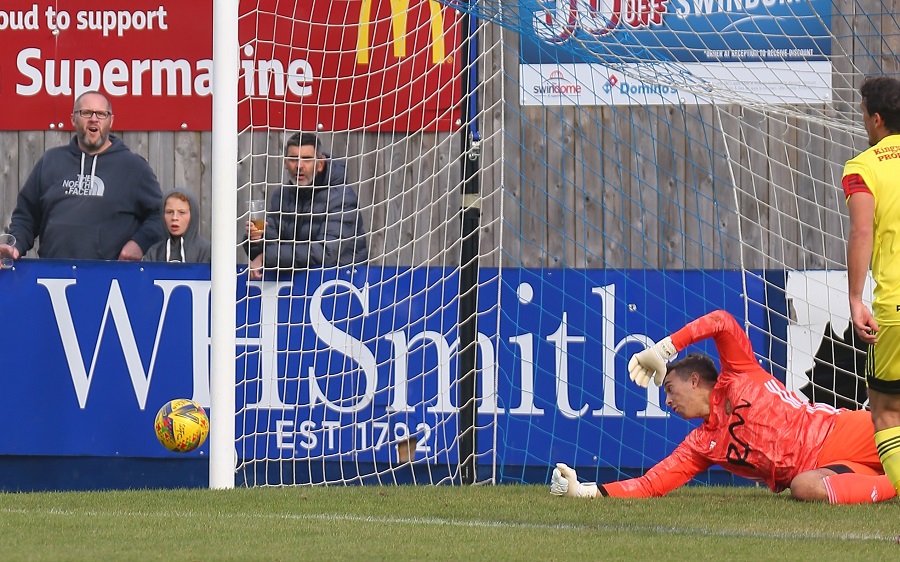 The game continued at a very fast pace but it was Marine who ended the first half the strongest. Campbell went close with another effort just wide of the post and then with 10 minutes to go Conor McDonagh brought out a top class save from visiting keeper Lewis Williams from a strong header to the back post. Skipper Liddiard had a powerful header just wide on 37 before the half ended with an effort by McDonagh easily saved followed swiftly by a late booking for Neil Martin of Tivvy for a tackle from behind on McDonagh.

The second half continued in the same vein as Marine came flying out of the traps. Tiverton keeper Williams pulled off an outstanding triple stop, first blocking Campbell’s shot then the follow up by McDonagh with the final effort from Liddiard’s header was then tipped over the bar spectacularly. The hosts were now dominating territory and McDonagh had an effort deflected wide when well placed. 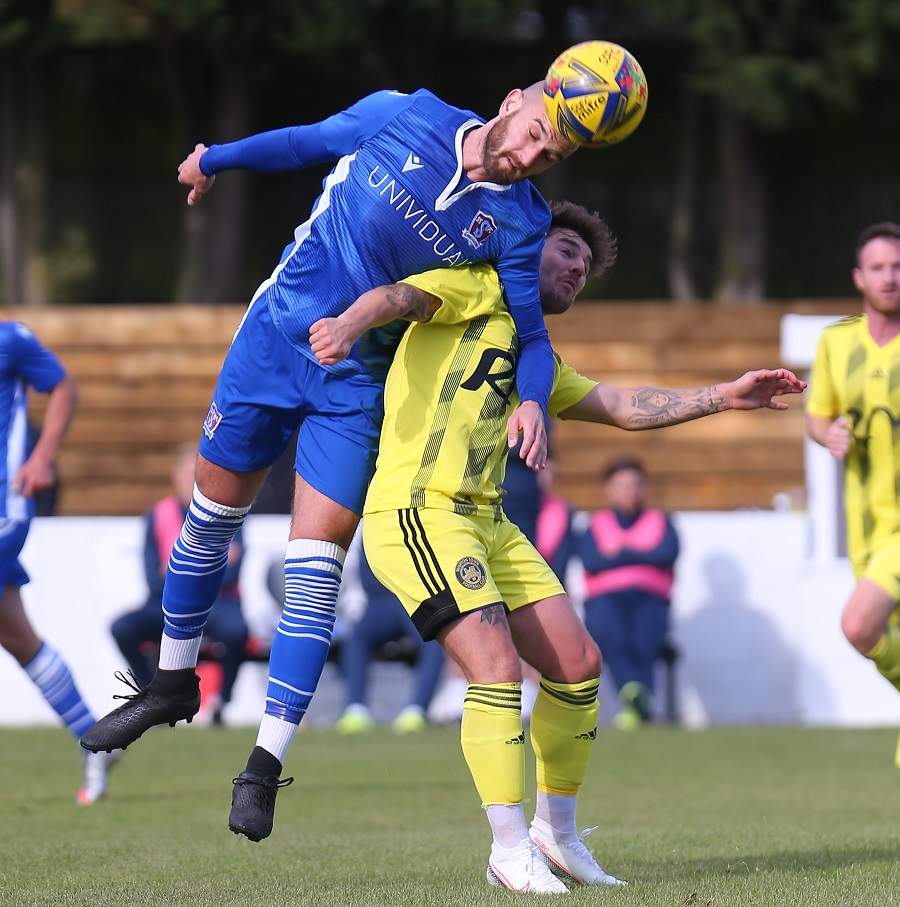 However, Tiverton weathered the storm and started to grow back into the game on the hour with Jack Stanley having to make a good headed clearance off the line to keep it all square. But Marine followed this up with two good headed chances. Hopkins headed just wide from Stanley’s superb cross and then Campbell 2 minutes later headed into the side netting from close in. Brad Hooper replaced Jack Stanley on 67 – this saw Liddiard drop back into the defence in an effort to make the breakthrough.

There was a strong penalty shout soon after when a Tiverton defender looked to have handled but the referee waved it away. Tiverton then decided to make a double change themselves to try and change the swing of the game with Jared Lewington and Jordan Lam replacing Bastin and Watkins. Shortly afterwards Martin Horsell made a good grab from a dangerous cross before Tivvy made their final change with Ed Butcher coming on for Chris Shepherd whilst manager Lee Spalding replaced Zack Kotwica with Henry Spalding in the 83rd minute. 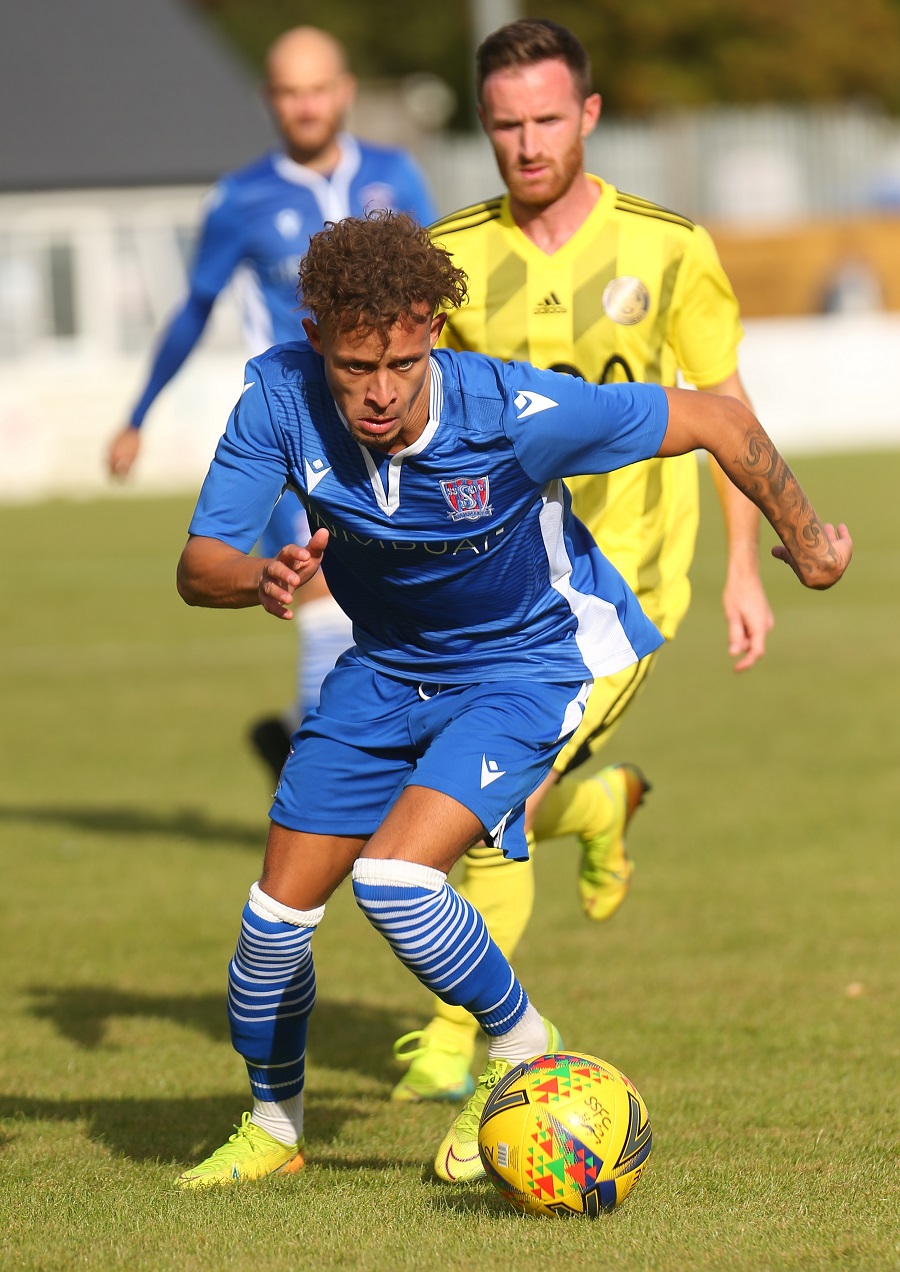 With three minutes on the clock a misplaced pass from Conor McDonagh found Louis Spalding caught upfield and the Tivvy substitute JORDAN LAM found space on the right wing, With fresh legs he drove on powerfully before cutting inside Jamie Edge and unleashed a daisy cutting drive into the bottom corner of Martin Horsell’s net. A real sucker punch of a blow for the hosts who had at least deserved a draw if not all three points!

As Marine pushed forward Harry Williams was bought on for Louis Spalding before the visitors broke away in injury time and a terrific long range shot by Butcher nearly rubbed salt into the wound but Horsell saved superbly.

Overall an excellent game of football played which was played with a very high quality with both sides looking like they will be up there at the end of the campaign. Marine will play worse and pick up three points in other games but the rub of the green was with the visitors today. Man of the match was the Tiverton keeper Lewis Williams for some outstanding saves which proved the difference. For Supermarine Jake Lee in defence had a very solid game and picked up the match sponsors award but for me the best player was Ryan Campbell once again, so consistent this season and very dangerous.