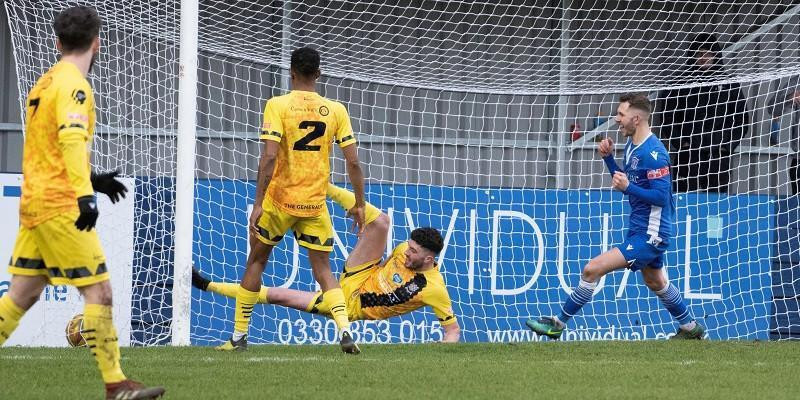 Marine took on Chesham United at the Webbswood Stadium on Saturday afternoon who came on the back of a 15 match unbeaten run which had lifted them to the brink of the play off places. Martin Horsell returned in goal after illness with Tom Sharpe coming in for the suspended Jamie Edge. Also returning from his loan spell at North Leigh was Conor McDonagh who replaced Kieran Phillips in the starting eleven who dropped to the bench. Also returning to the bench were George Dowling after suspension and Pierce Mitchell after injury. Frankie Artus was still missing from a niggling injury. 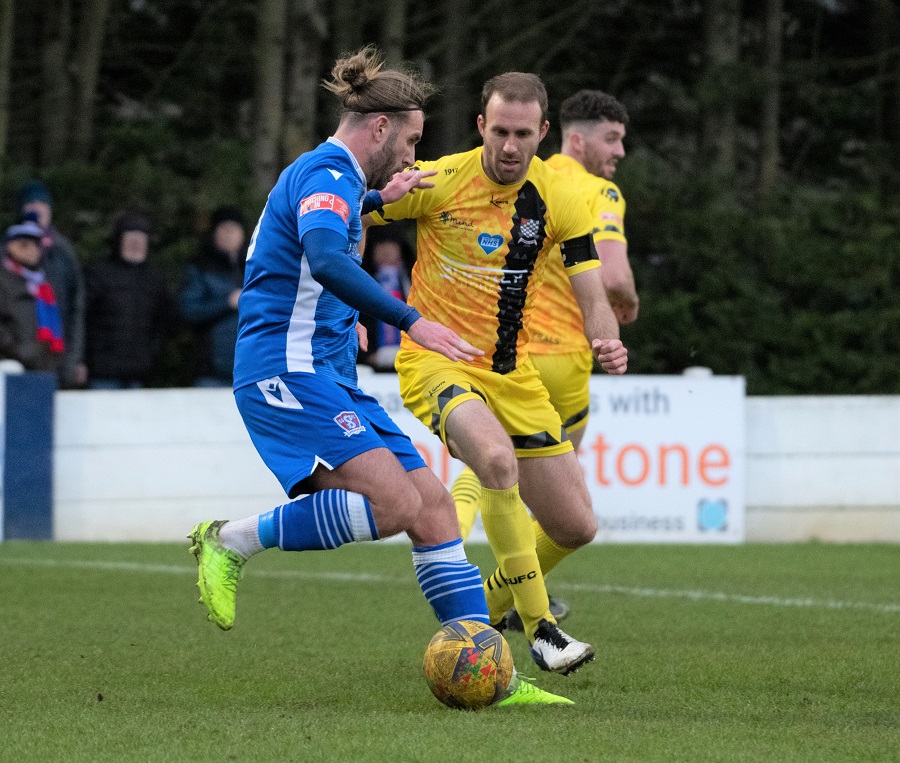 Both sides took time to adjust due to the swirling wind and an early effort at goal coming on twelve minutes as Harry Williams let fly from long range but it was easily fielded by Chesham keeper Sam Beasant. In a was a tough competitive half with few goalmouth chances and bar a late booking for Shaquille Hippolyte-Patrick for a foul on Michael Hopkins there was little else to report with defences very much on top and most of the play was contained to midfield. 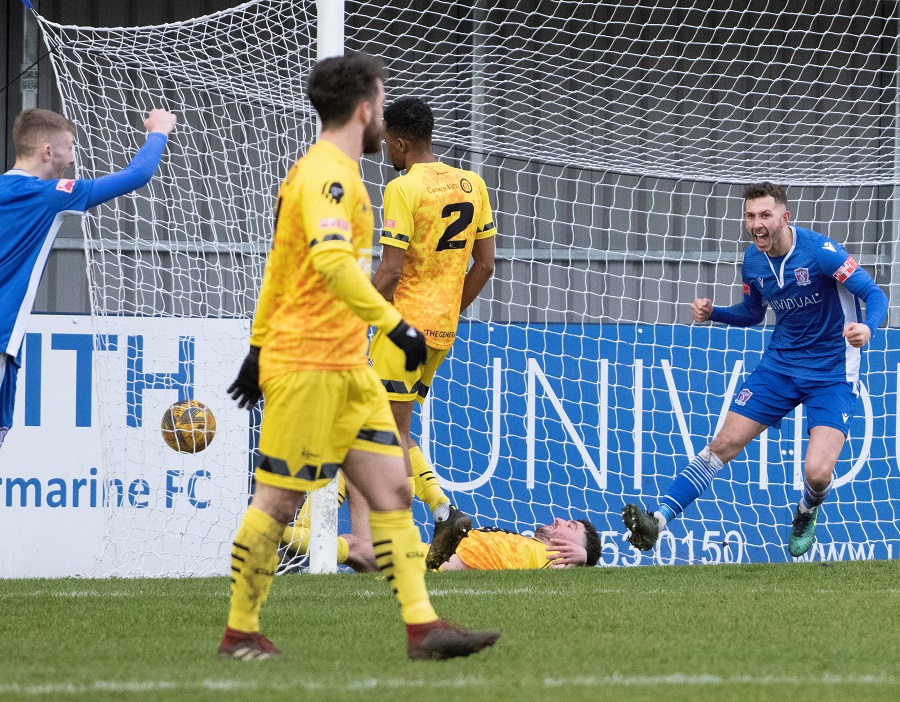 Marine started the second half strongly but quickly saw Michael Hopkins receive a yellow for a late challenge. The home pressure led to a strong handball appeal in the Chesham box which was turned down by the officials, but clearly as the game went on the hosts were starting to get the better of Chesham. The goal was coming and it arrived in the fifty-sixth minute. An initial corner was cleared before it was put back in to the edge of the penalty area when Tom Mehew cleverly headed the ball back to Henry Spalding whose first time cross to the back post where TYRONE DUFFUS rose above his marker to guide his header expertly into the far corner of the net with the keeper Beasant deceived by the downward header. 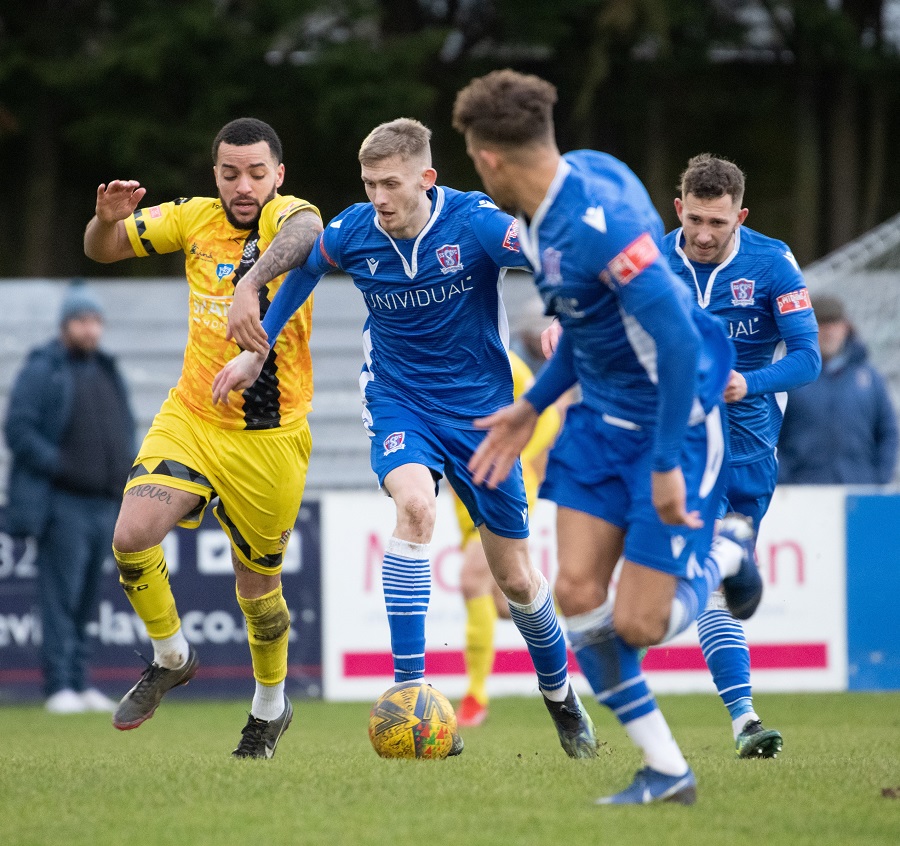 Soon afterwards Henry Spalding was denied not once but twice by the visiting custodian blocking his shots before the ball deflected back to Tom Mehew whose clever chip over the keeper and a several defenders went just over the bar. Chesham made three changes in ten minutes to try and turn things around and Martin Horsell did very well to tip a low effort around the post. Some great skills from Henry Spalding saw him go round the keeper but somehow his shot was headed away off the line by a Chesham defender. With 20 minutes left Martin Horsell claimed a long ball into the box but was caught late in the chest by the onrushing forward Karl Oliyide. The forward was lucky that the officials were lenient on this day and he saw only a yellow and so easily could have been a red. Thankfully Horsell was fit to continue after treatment. 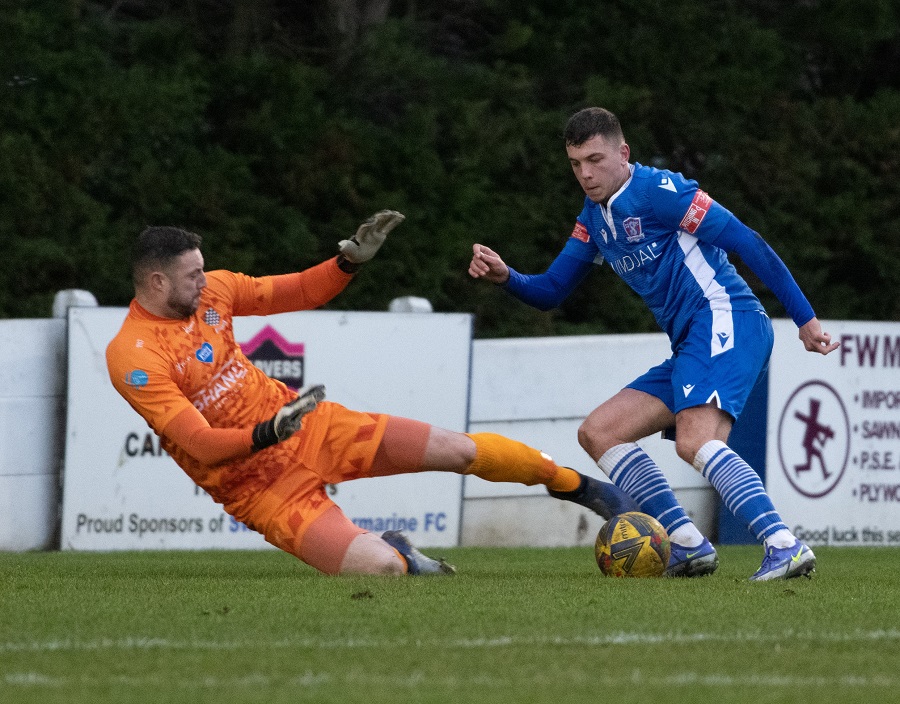 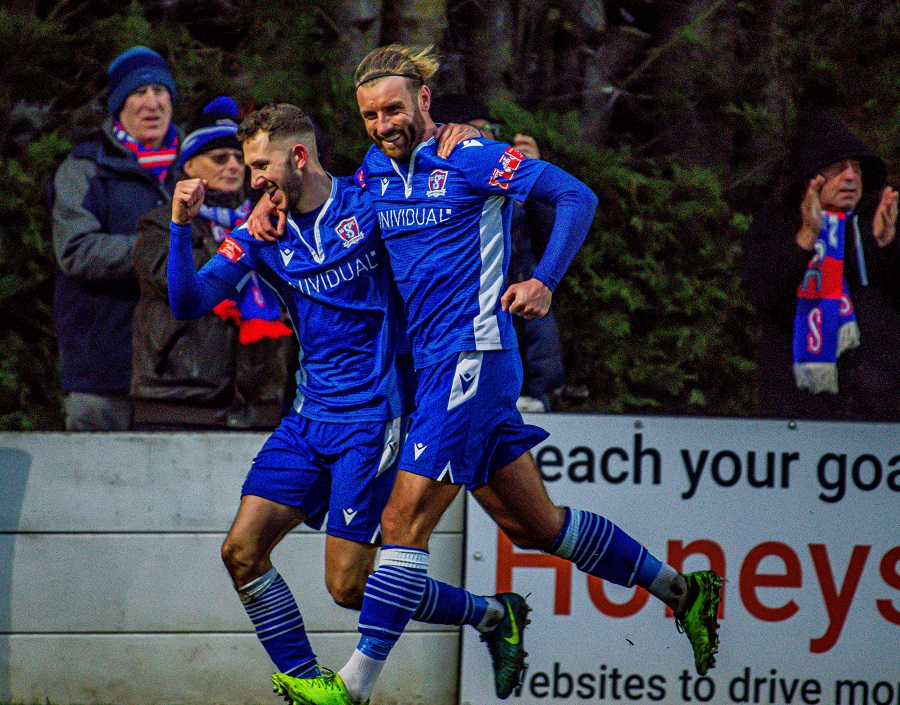 George Dowling came off the bench to replace Tom Sharpe and his impact was immediate as he won the ball and slipped a though ball to Harry Williams who played a neat one-two with Conor McDonagh and HARRY WILLIAMS was through on goal and he made no mistake as he slid the ball into the corner of the goal for his 12th of the season. 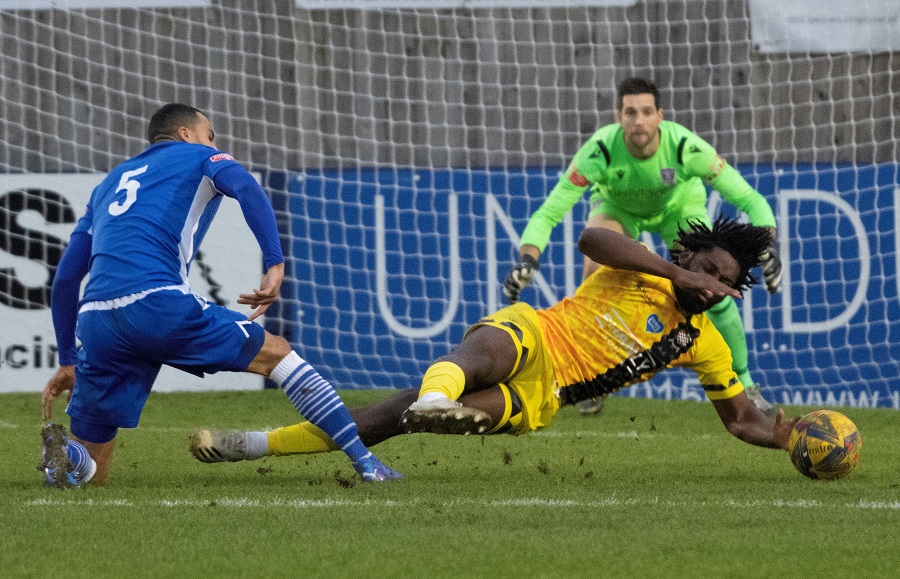 Tyrone Duffus brings down Kylian Kouassi for a Chesham penalty 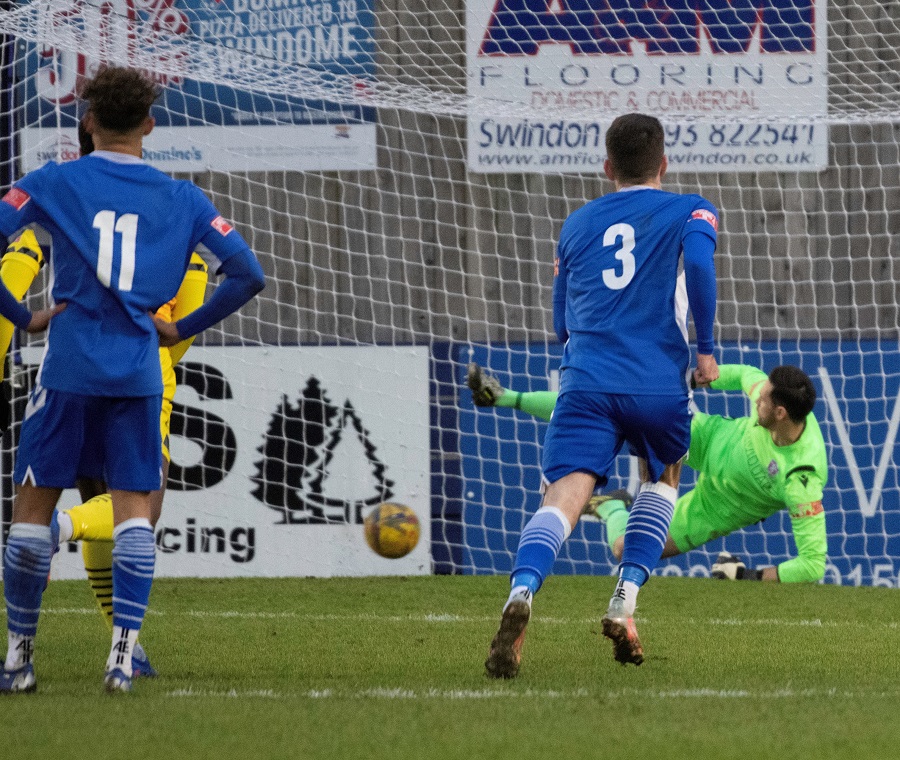 Kieran Phillips replaced the excellent Conor McDonagh with eight minutes to go but the next incident of note came at the other end as Chesham began to go forward in numbers. Substitute Kylian Kouassi went down after a challenge in the box by Tyrone Duffus and BRAD CLAYTON sent Martin Horsell the wrong way from the spot to make it 2-1 and a nervy five minutes plus injury time for Marine. But Marine held on for the victory after the referee signalled six extra minutes, but Marine held on well, mainly by the corner flag to see out the win and grab the three points, ending the visitors unbeaten record in the process and making it five wins from their last six at home. A really hard, tough and gutsy display from Marine who continue their improved displays and good form. 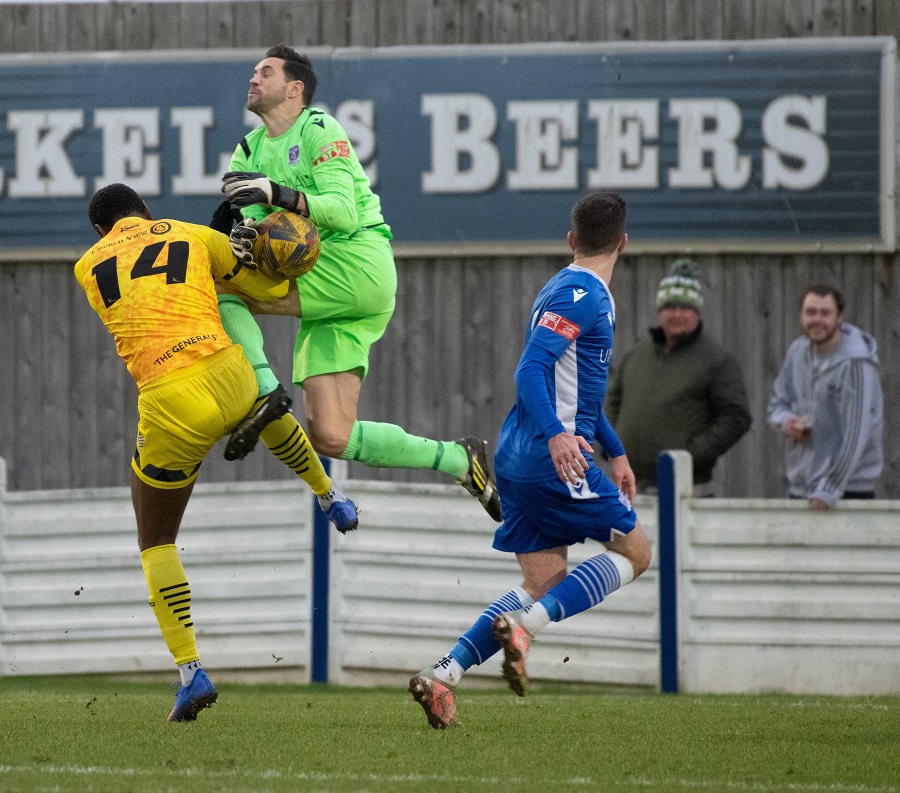 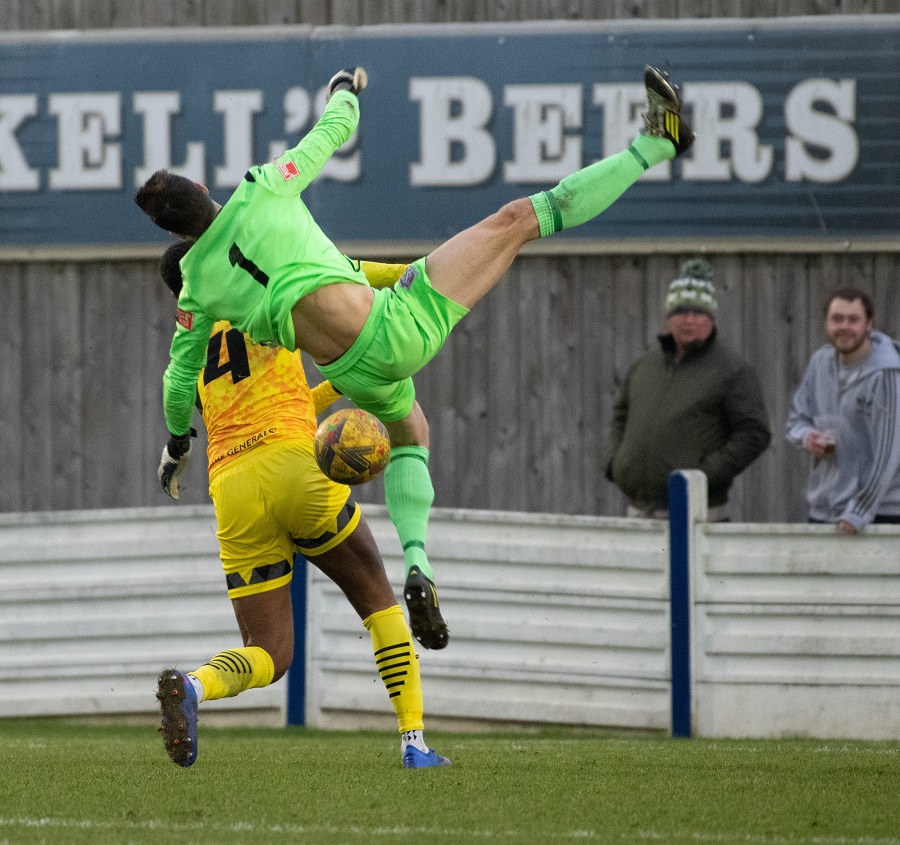