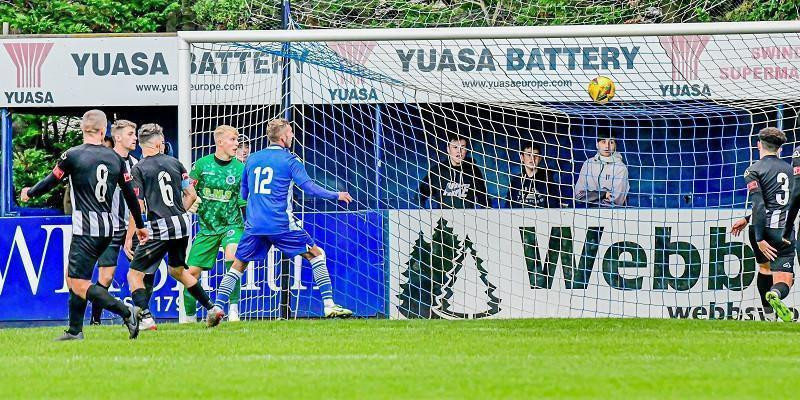 Swindon Supermarine made it 3 wins in a row and moved up to third in the PitchingIn Southern League Premier Division South with a solid showing over Dorchester Town 2-0 at the Webbswood Stadium on Saturday. Marine recalled Brad Hooper after a one-game suspension and handed a first start in his second spell for the club to David Pratt up top. Missing out were Louis Spalding injured whilst Henry Spalding and Joe Shepherd moved to the bench. 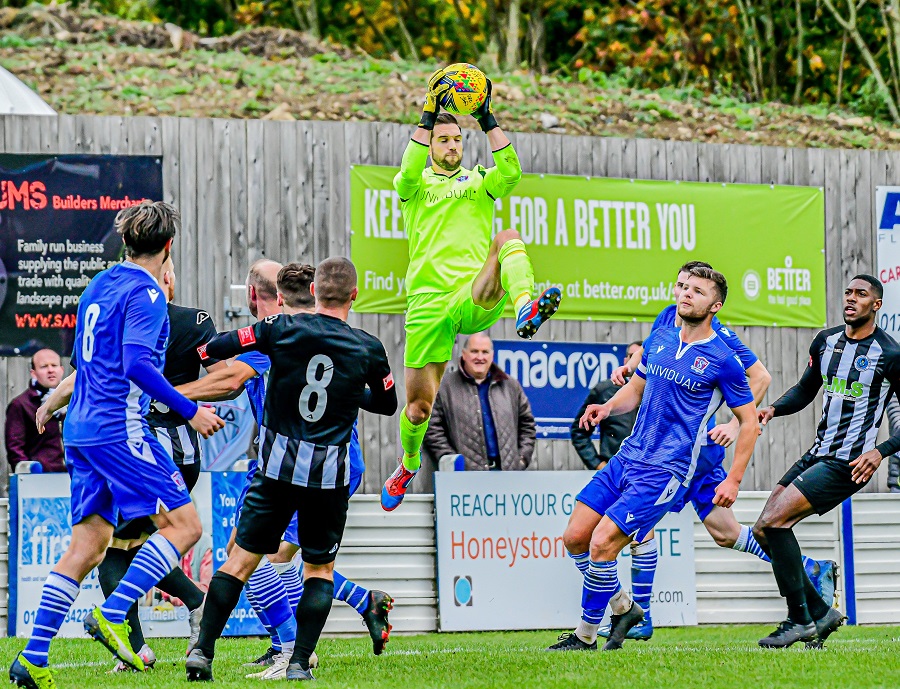 Supermarine made a dominant start with the ball but the visitors were making it tough by setting up very compactly and stopping Marine from playing their usual passing game. In fact the first effort came from Dorchester player Billy Lowes whose fierce drive from 25 yards hit the top off the crossbar and went over. Thomas Blair dragged a shot wide on 20 minutes for the visitors before Brad Hooper had a good effort fly over on 26 mins from the edge of the box for the hosts first effort on goal. 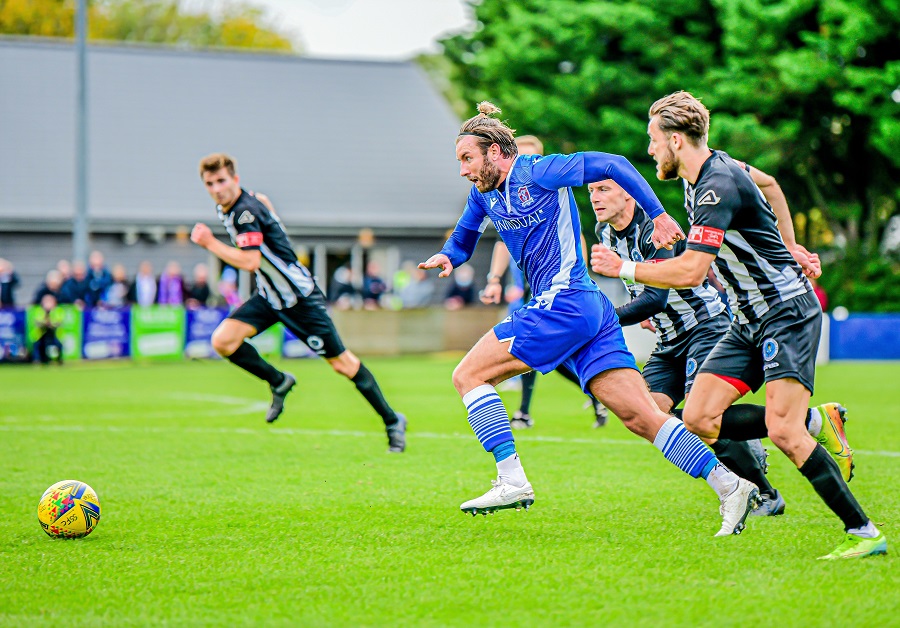 This was closely followed by a half hearted appeal for a penalty when David Pratt went down but the referee seemed to get it right. Marine were passing well but Dorchester defending stoutly to deny the shots. But Josiah Dunstan was a little too forceful with a challenge on Ryan Campbell which left him flattened and was given the first yellow card of the game. Jake Lee headed over the resultant free kick and it was Lee who also had the last chance of the half heading just wide from a corner.

A dominant half possession wise but Dorchester keeping Marine at bay. The second half started in the same vein with the hosts having the bulk of the ball. David Pratt picked up a fairly harsh early booking for a late challenge before Conor McDonagh headed over a Ryan Campbell cross. Jamie Edge then had an in swinging free kick cleared off the line as Marine upped the pressure. 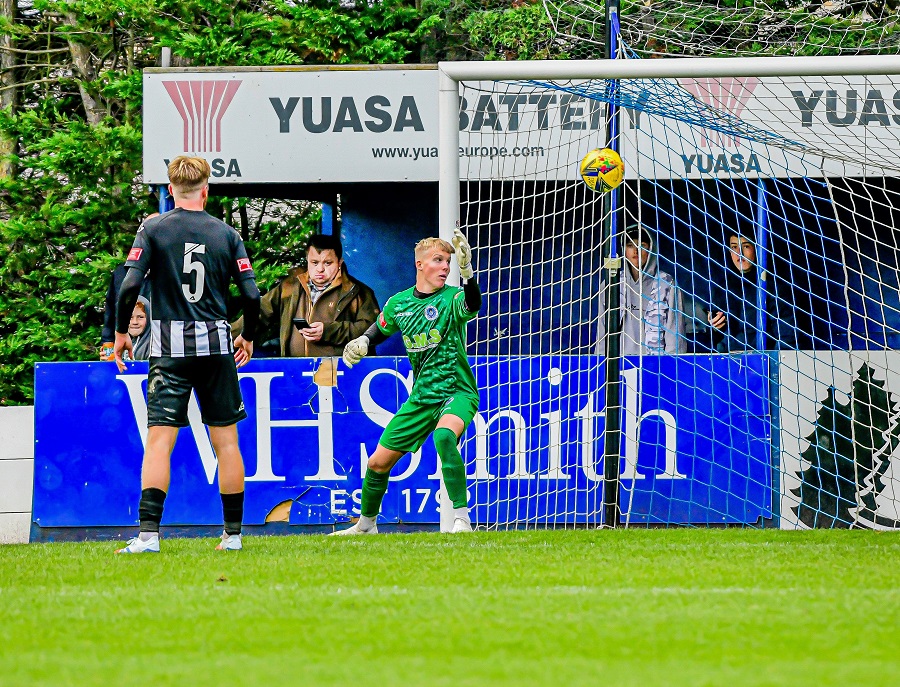 It was a surprise goal when that pressure told as the lively Ryan Campbell and Michael Hopkins linked up again down the left before Hopkins’ cross from the left-wing was swiped at by defender Josiah Dunstan who sliced it off his shim and beyond William Buse in the Dorchester goal to give Marine the lead on the hour. Another cross from Campbell was just volleyed wide by McDonagh a minute later as the hosts went for the killer second goal. 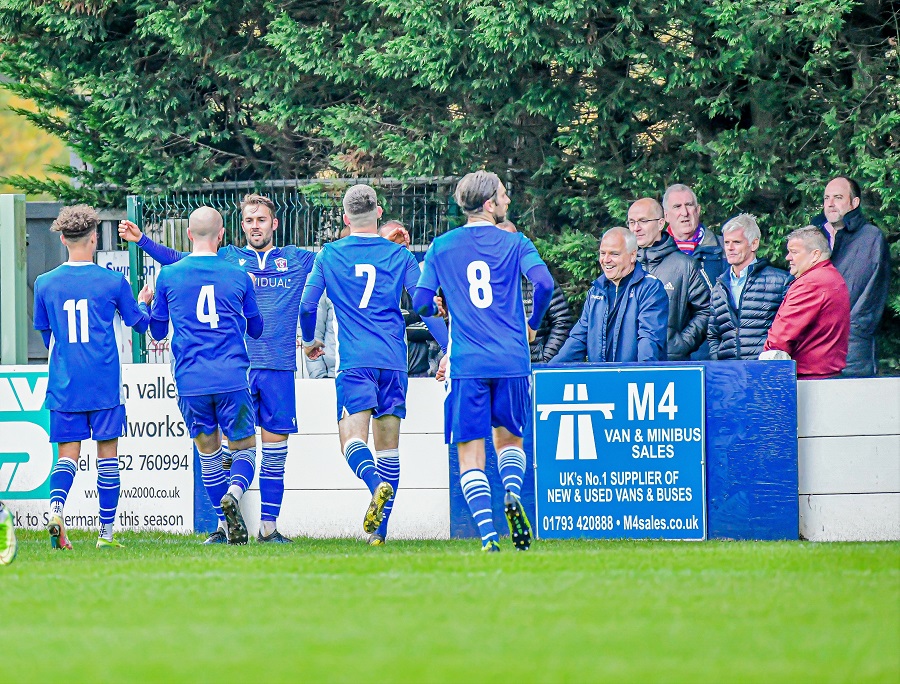 And it seemed to have arrived on 64 when Zack Kotwica cross was headed in low down by Pratt but he had strayed offside. In a bid to freshen things up and provide something different the gaffer Lee Spalding introduced Harry Williams and Henry Spalding on for McDonagh and Kotwica. 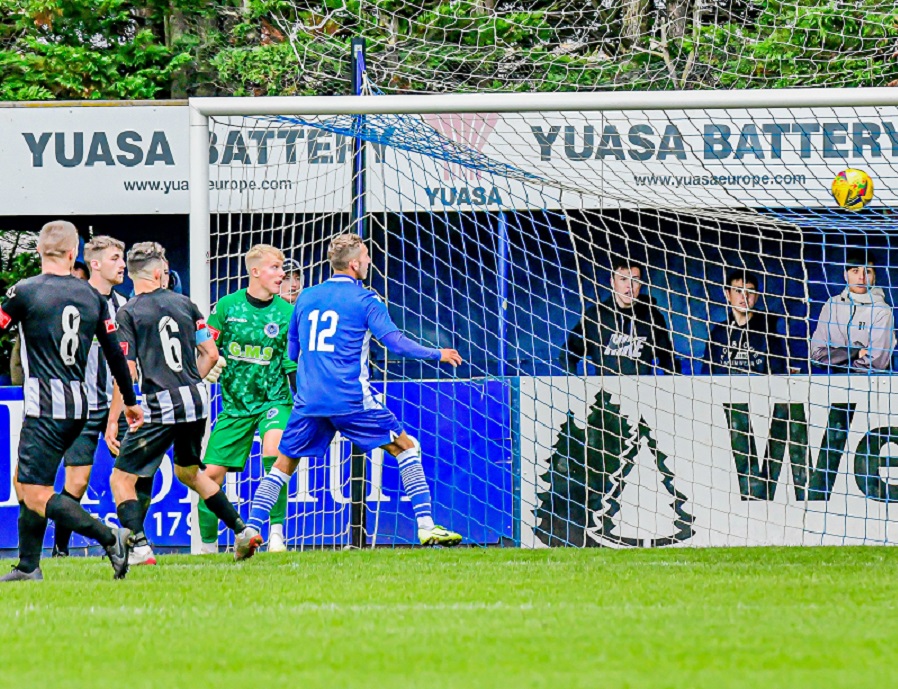 A super save by keeper Buse from another Pratt header set up by Jack Stanley’s excellent run and cross denied the hosts again. Dorchester responded with a series of substitution’s and changed tactics adding an extra man up top. This brought a few more attacks with Horsell Martin Horsell forced to handle well under pressure a couple of times from crosses but left the visitors more susceptible at the back. 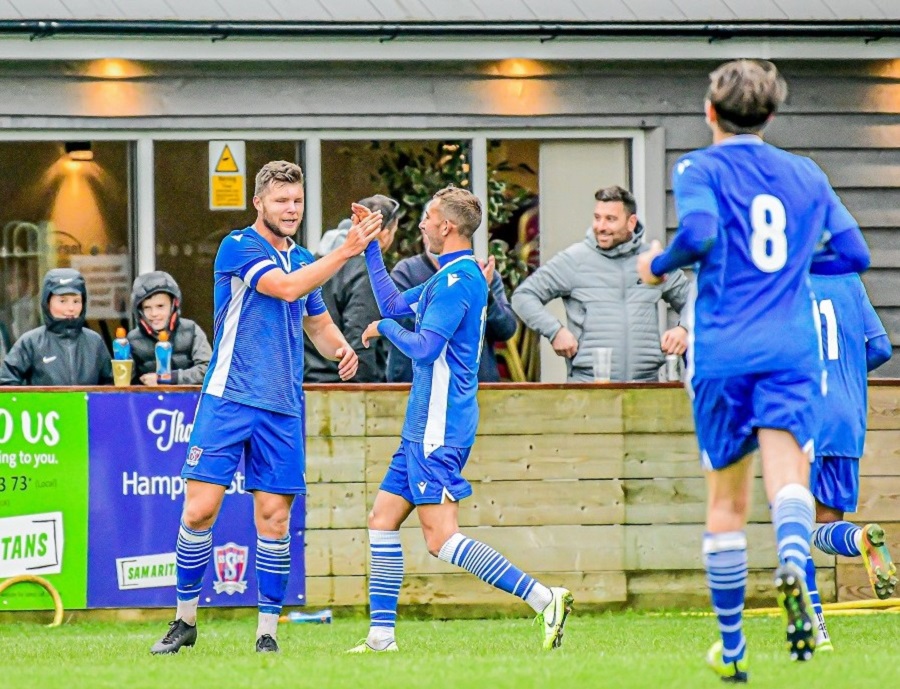 This told and with three minutes to go pressure down the right by Henry Spalding bought about a corner which was looped home at the back stick by the skipper MAT LIDDIARD to seal the points! Joe Shepherd came on to see Marine over the line replacing the hard working Hooper. 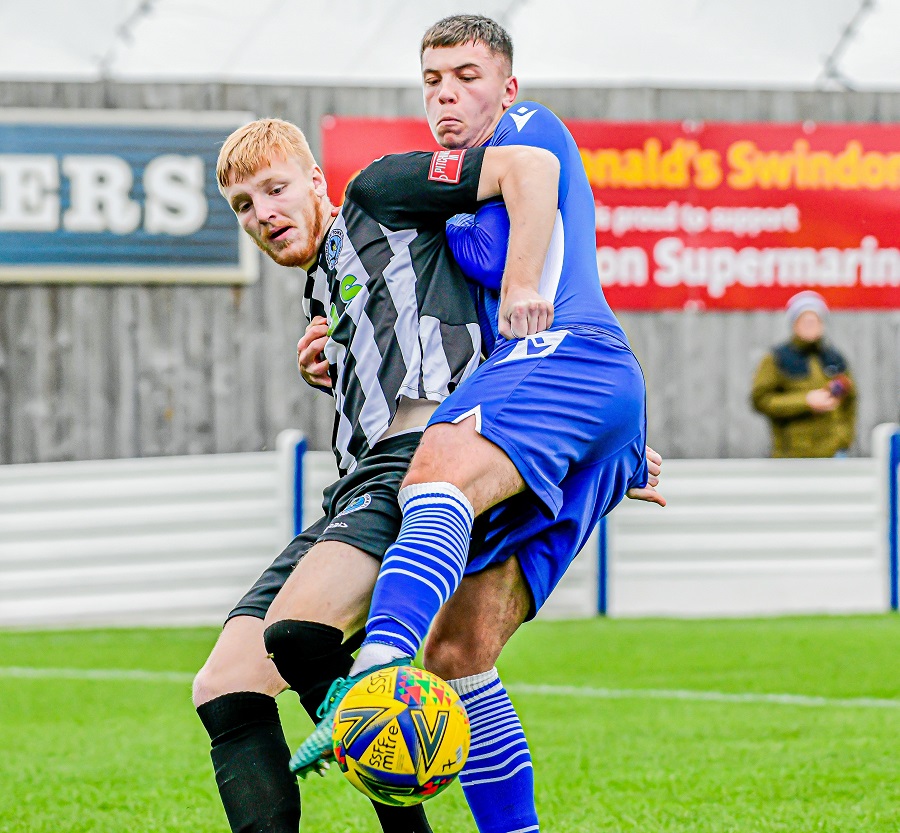 Overall a solid workmanlike performance with a deserved three points gained against resilient opposition with a second clean sheet in a row gained into the bargain. The star man was David Pratt who led the line with intelligence and a lot of running! A special word for referee Sam Fudge and his officials who overall did an excellent job and for the most part (helped by good sportsmanship by both teams) was barely visible. 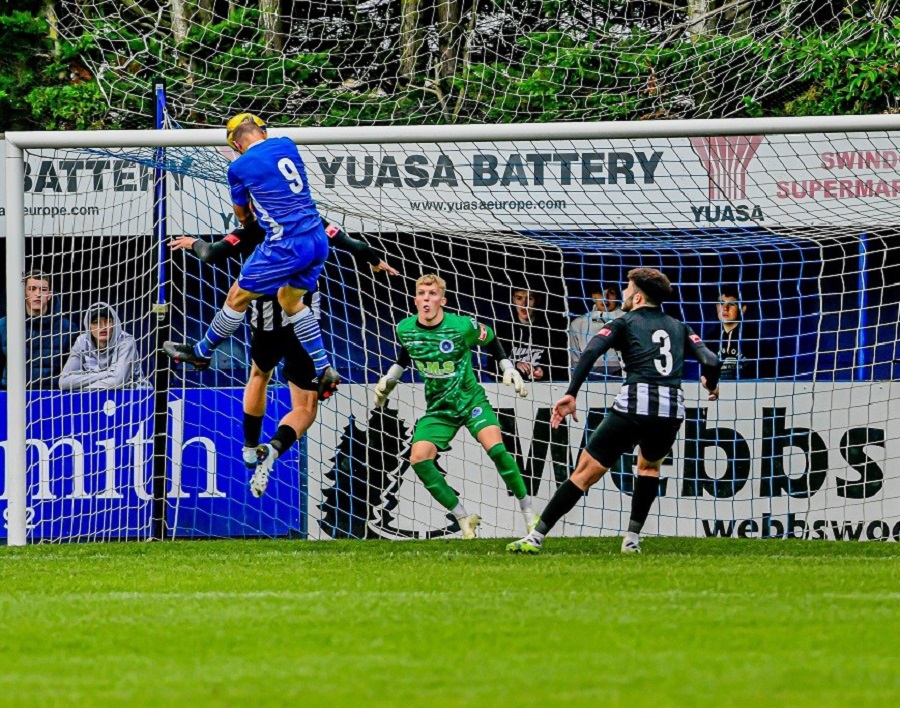 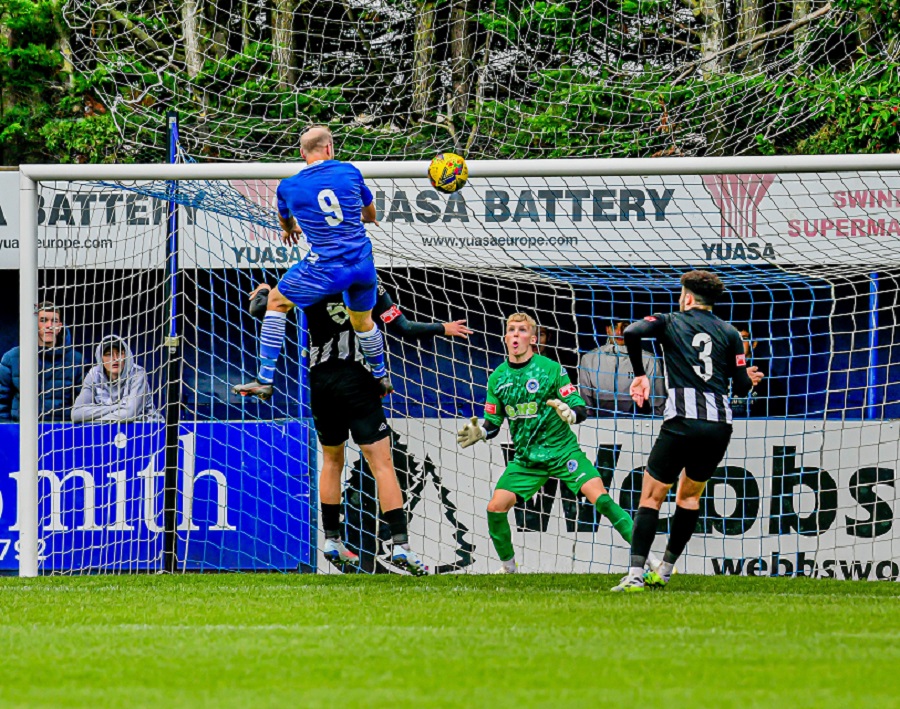 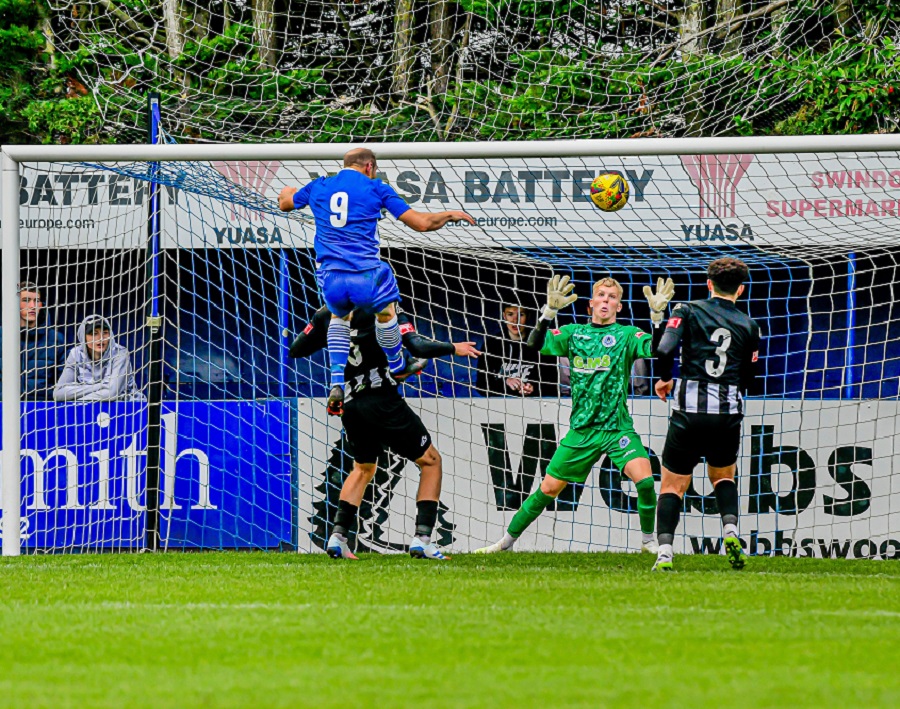