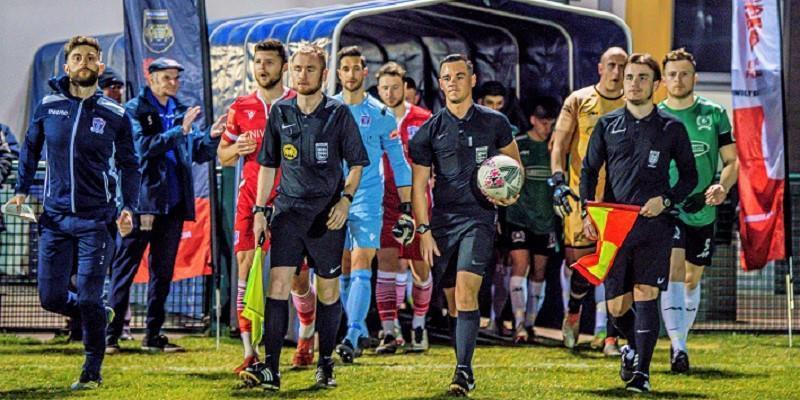 SKIPPER SECURES SPOT IN THE FINAL

Marine travelled to the nearby Gerard Buxton Ground, home of Royal Wootton Bassett FC on Tuesday night, as they took on Westbury United of the Hellenic League Premier in the Wiltshire Premier Shield semi final. Returning to the starting eleven came Kieran Phillips, now recovered from illness, Tyrone Duffus back after a four week spell injured and Matt Britton with Conor McDonagh still out ill, with Tom Mehew having ended his loan spell, and George Dowling and Jamie Edge dropping down to the bench as manager Lee Spalding shuffled the pack in a busy week. 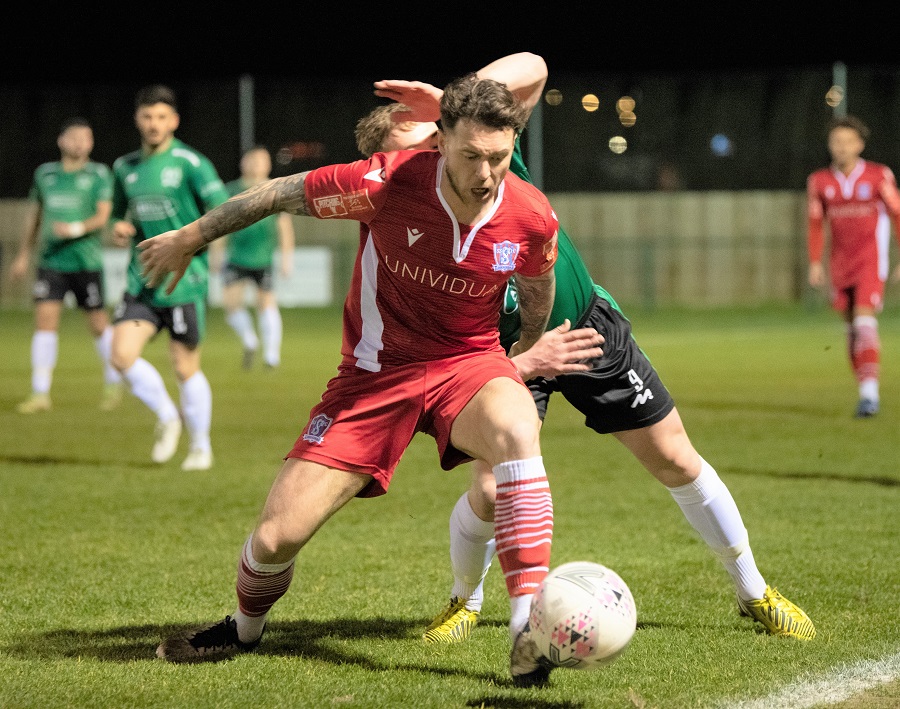 A quiet start on a very bobbly surface saw both sides getting to grips with things before Marine started to settle but with few chances at either side. Then the game exploded into action on 19 minutes when Harry Williams picked out run from KIERAN PHILLIPS and he clinically slid the ball past Mark Bowden in the Westbury United goal to give Marine the lead with his 13th goal in 24 starts, quite a return. 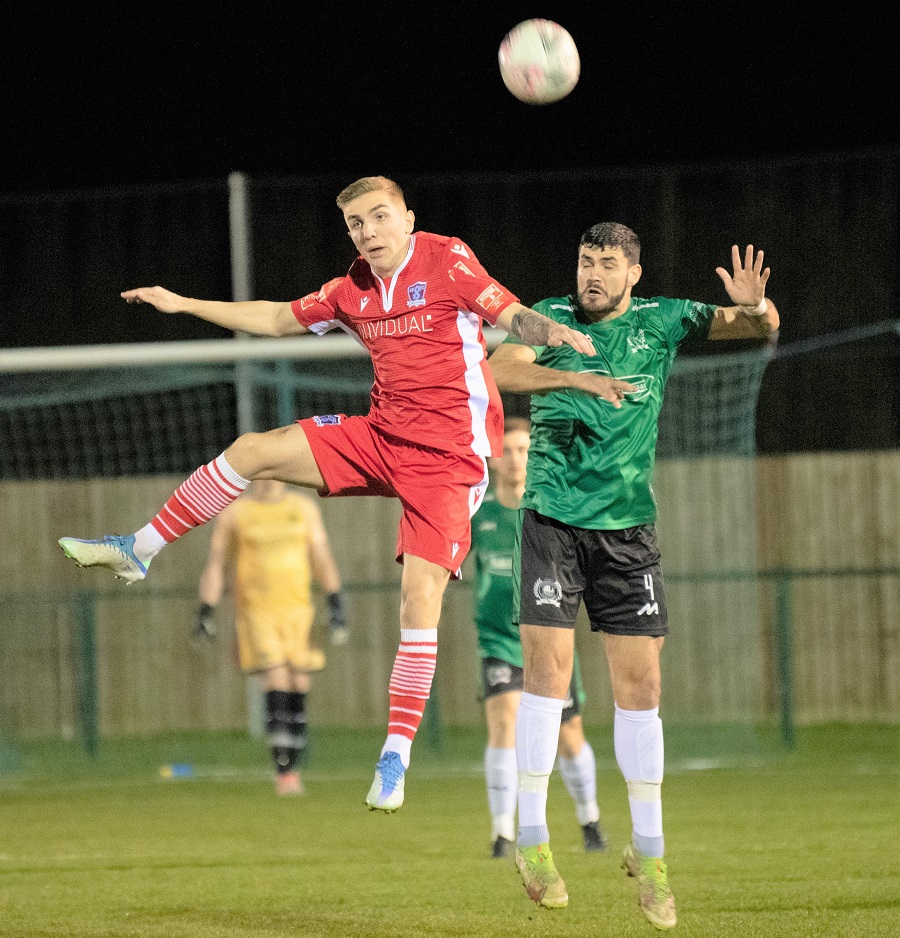 Once again Marine were vulnerable having just taken the lead and from a corner Marine defender Tyrone Duffus, who was under a challenge, could only head the ball back across the goalmouth and it fell kindly to Westbury’s centre forward HARVEY FLIPPANCE who headed home past from close range giving Martin Horsell no chance. Marine were rocked by the equaliser and Westbury piled on the pressure with a shot from Joe Standling from close in blocked by Mat Liddiard and another effort from Westbury was fired over the top soon afterwards. 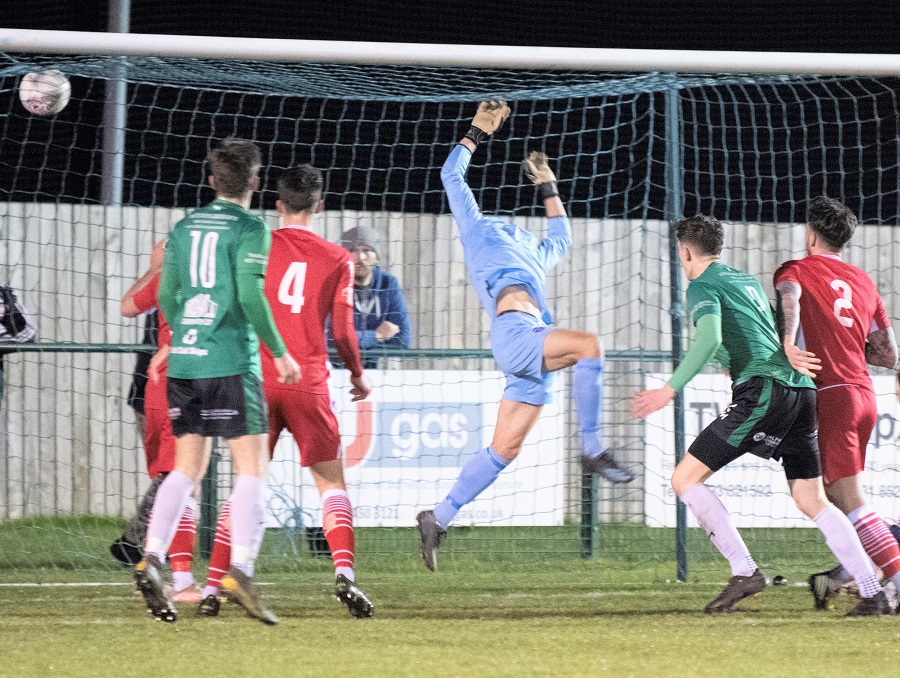 Slowly however Marine found their composure once more and ended the half with more control. Ryan Campbell had an excellent diving header that was brilliantly tipped around the post by Bowden on the half hour but for some reason a goal kick was awarded, and Campbell followed this up minutes later with a stinging shot cleared off the line by a Westbury defender. 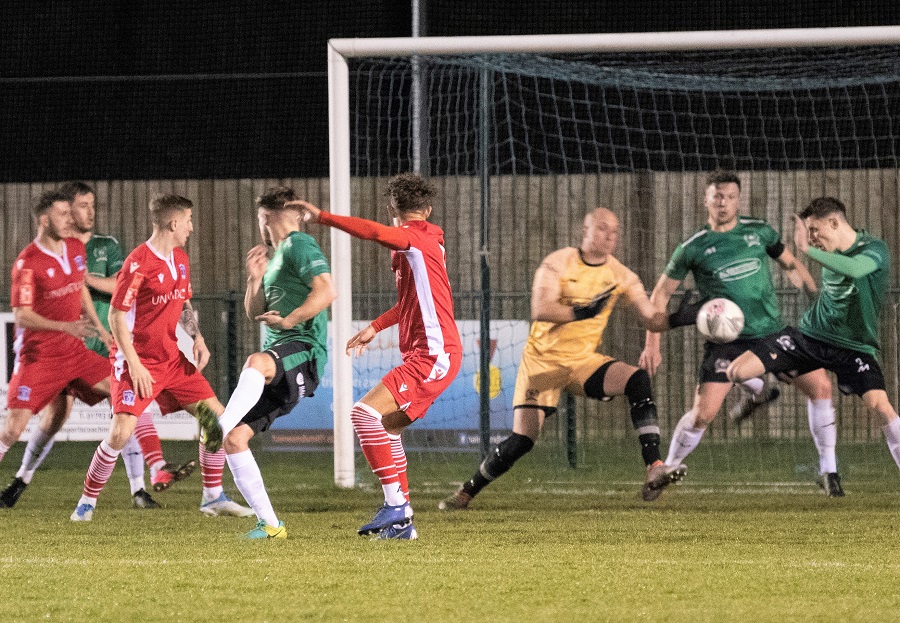 It was all square at the break, but Westbury were proving a tough nut to crack and Marine realised they would have to up the level to get to the final. Matt Britton missed a good chance early in the second period when close in when he shot high and wide before a neat Kieran Phillips header landed on the roof of the net. Westbury were holding firm so manager Lee Spalding decided to make a double chance on sixty-five minutes with Matt Britton and Kieran Phillips being replaced by George Dowling and Brad Hooper, which meant a slight reshuffle in the line-up. 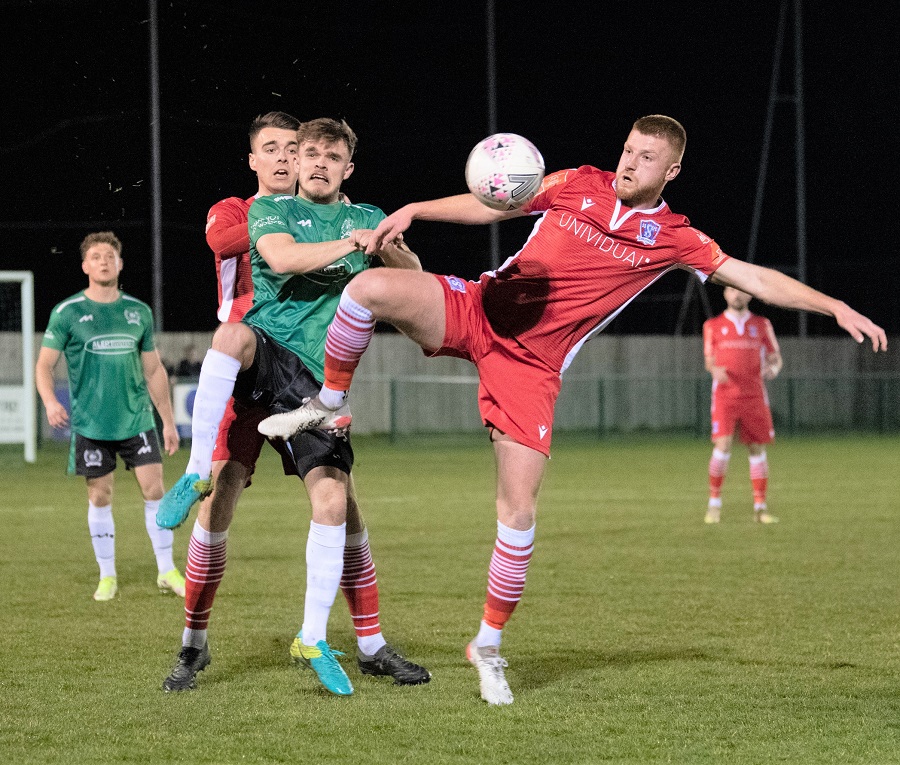 The changes worked as Marine started to gain a foothold in the game. Henry Spalding had a good effort blocked on the line before George Dowling hit an effort just wide of the post. With fifteen minutes to go and following a set-piece the ball found its way to the skipper MAT LIDDIARD at the far post and close in his shot was blocked on the line but after it was cleared by a Westbury defender he followed up with a diving header that hit the bottom of the post and was adjudged to have gone over the goal line by the eagle-eyed linesman on the near side. This was the Marine captain’s second goal of the tournament having also netted against Highworth Town in the quarter finals. 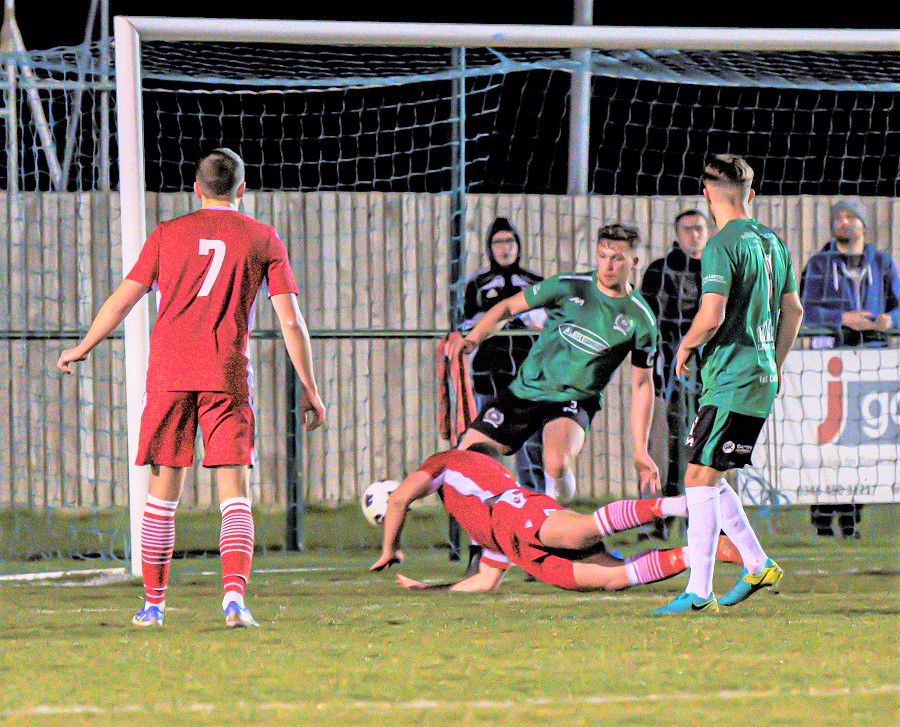 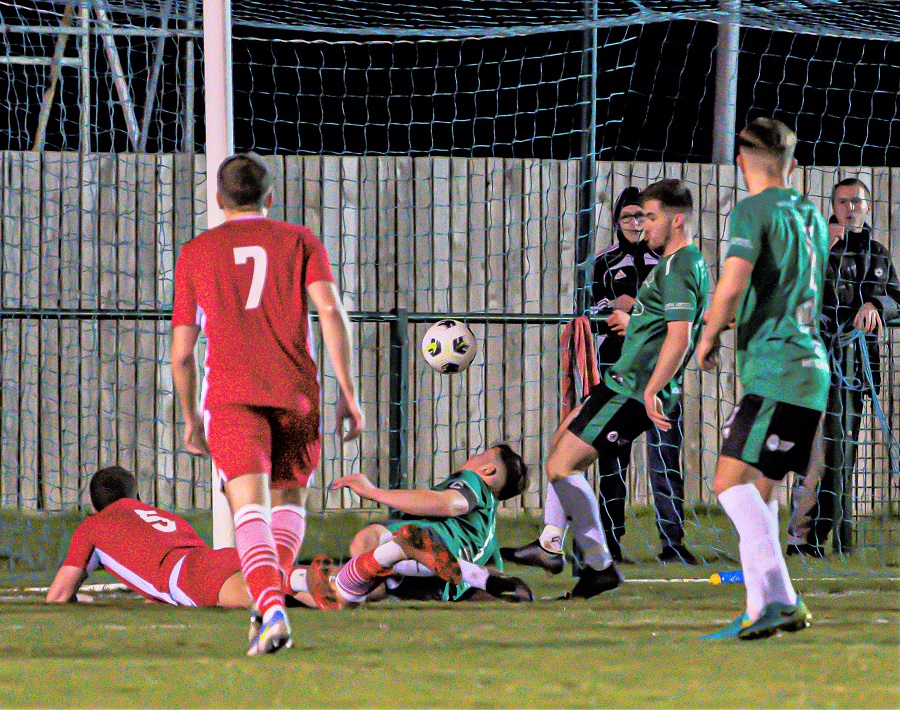 Jamie Edge replaced the hard working Tom Sharpe with twelve minutes left. Harry Williams was denied by the keeper after a shot on the turn before Ryan Campbell had another mazy run and effort into the side netting. There were further strikes at goal from Campbell who curled the ball wide from a seemingly unmissable position and Brad Hooper who smashed the ball over the top crossbar when well placed. 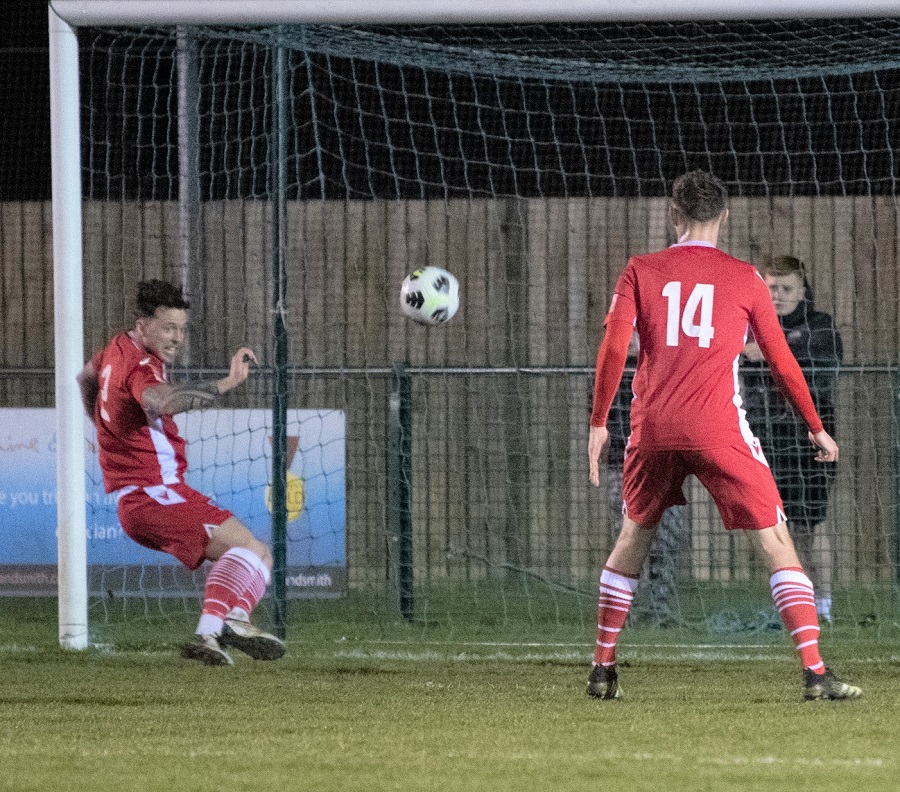 With three added minutes Westbury chucked everyone forward including the keeper and despite a late scare when the ball seemed to roll along the line Marine held on for the victory and a date with Corsham Town at the County Ground on May 3rd. Corsham’s win over Salisbury showing just how easy it could have been to lose to a lower league side. Credit to the Westbury United team, who showed why they are a good bet for promotion to the Southern League via the playoffs, but Marine had done enough on the night to earn their spot in the Wiltshire Premier Shield final. Credit also to the excellent team of officials who done their job quietly and efficiently all evening, well done guys.

Fans player of the match: RYAN CAMPBELL, who is having an excellent March.