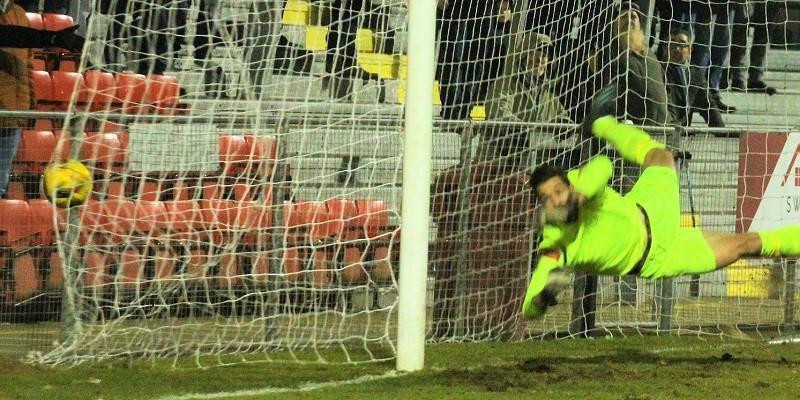 Marine completed their trio of away trips with a Tuesday night visit to the seaside town of Weston-super-Mare who were flying high at the top end of the table and looking to push into the play off places. Manager Lee Spalding made two changes from the weekend with super sub Ryan Campbell replacing Tom Mehew on the left and Lewis Hall coming in for the injured Michael Hopkins. It was a lively start from both sides, Ryan Campbell’s cross shot flew just over the top and Weston had an early handball shout for a penalty which would have been harsh and was rightly waved away by the referee.

The first real chance came for the hosts who were exerting early pressure, when Sonny Cox just side footed a chance past the post close in. Kieran Philips had the first good chance for Marine but shot straight at keeper Max Harris when put through. This was followed by another nice piece of play which saw Henry Spalding had some space on the edge of the box but his firm shot was repelled again by Harris in what was turning into an open attacking and exciting match. Weston were putting Marine under some pressure but solid defending was denying any clear chances and on the break Marine looked dangerous.

George Dowling had an effort on 20 mins fly high over the bar. Then Weston’s Josh Thomas had goal bound shot deflected wide soon after, before some Marine pressure from corners ended with a Kieran Philips overhead kick going wide. A terrific save by Martin Horsell at full stretch saw the scores stay level after a long range strike from Jason Pope on thirty-four minutes. The last action of the half saw Weston defender Sam Avery go into the referee’s book for persistent fouling on Kieran Philips who was causing the big defender all kinds of worries.

Marine were the first go forward in the second half with Henry Spalding’s volley being well held by Harris. And then came a key moment of the game when the home sides Josh Thomas was late in a challenge and ended up going over the top of the ball to catch Jamie Edge. The referee deemed it to be a reckless one and issued a red card and Weston were down to ten men. For the next ten minutes Marine dominated the play as Weston arranged there line up. Ryan Campbell had a shot deflected wide, before Weston made a change and brought on an extra midfielder with Jacob Cane replacing Sonny Cox on fifty-eight minutes in attempt to gain more control of the game. It seemed to work and despite being down to ten men the hosts were controlling possession once more. Dayle Grubb curled an effort just wide on sixty-two minutes to emphasise that they were not going to settle just for a point.

The Weston change opened up chances at the other end and Ryan Campbell was denied once more by an outstanding save by keeper Max Harris when he somehow stretched out a left foot to deflect a fierce drive wide for a corner where Mat Liddiard’s header was saved by Harris once more. With twenty minutes to go manager Lee Spalding made a change up top with Conor McDonagh replacing Kieran Philips. His impact was almost immediate as his hold up play set up the ball for Henry Spalding to take a shot from the edge of the box but he blasted a long way over the goal.

George Dowling then had a curling effort straight at Harris soon afterwards but Weston were still pushing themselves forward. A cross from Scott Laird was cleared away before Jay Murray fired the loose ball over the crossbar. Zack Kowtwica replaced Henry Spalding with ten minutes left but the game seemed to be petering out as the last minute approached. A late challenge from George Dowling, which saw him booked, gave Weston a free kick twenty-five yards out. From the freekick DAYLE GRUBB curled the ball over the wall and into the bottom corner of the goal giving Martin Horsell a lot to do to make the save and grab all three points in the last minute for the ecstatic home team as the ground erupted.

There was no time really for a reply and the last incident of note was when Zack Kowtwica slid off the pitch into the metal barrier and had to be replaced by Tom Mehew for the final additional minutes. A heart breaking finish and not for the first time this season Marine had put in a strong defensive performance but had somehow contrived to end up with no points once more despite deserving much more. No game at the weekend so some rest before the start of a couple of must win home games against Hartley Wintney and Beaconsfield Town as Marine look to secure their place in the Premier Division.