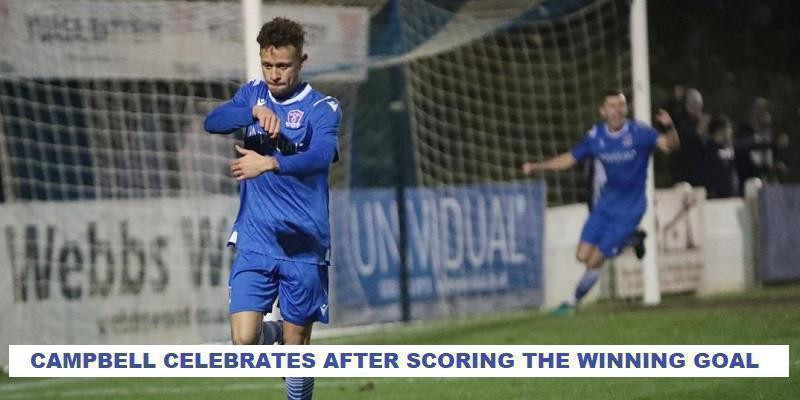 by Brian Davis(Media & Press Officer)
It wasn’t a game that will live long in the memory bank but come May, if this team achieves their ultimate goal at the end of the season, then they may well just look back at this cold January Tuesday night at the Webbswood and say, that was three well and hard earned points against a team battling relegation, that they had to dig deep for. Whilst hindered by an official, Ryan Campbell finished off a wonderfully flowing team move to score the only goal of the game, extending the home side’s unbeaten run in the league to 11 league matches.

Manager Lee Spalding made just one change from the side who beat Salisbury on Saturday as Joe Shepherd came in at Right back for Louis Spalding, with Simon Downer returning from injury on the bench.

The game started slowly with no real chances of not for either side until Conor McDonagh headed a Joe Shepherd cross wide. When Nathan Walker handled the ball on the edge of the area it presented ’Marine with their first real opportunity on goal and Michael Hopkins stung the hands of visiting keeper Shane Murphy from the resulting kick to force a corner.

Franklyn Clarke had the first effort on target for Town, but his effort from distance was comfortable for Martin Horsell whilst Harry Warwick, when well placed six yards in front of goal, completely mis-kicked his effort wide of the post when it looked harder to miss than score.

Jamie Edge’s free-kick caused a moment of panic in the Dorchester back four as it glanced off a defenders head and took a favourable bounce, just wide of the post and out for a corner. The visitors defensive jitters continued as Mat Liddiard won the header from the corner, which led to a scramble in the box before Brad Hooper fired an effort over the bar from distance.

Dorchester were lucky to still have ten men when a flailing arm caught Harry Williams across the face as Walker can count himself fortunate to not have been back in the changing rooms by half time, which would be the main talking point of a somewhat uneventful half of football.

It was another positive start from the break for Lee Spalding’s side, who forced a couple of early corners but unlike Saturday weren’t able to cash in early on as McDonagh’s header at the near post was deflected wide.

It might have been a different story once again when Jamie Laird went in high on Henry Spalding, receiving just a booking despite the assistant on the near side appearing to indicate that a red was warranted much to the dismay of nearly everybody at the Webbswood. Laird was then immediately substituted by visiting manager Leigh Robinson.

McDonagh went close again when he hit an effort into the side netting on the hour mark and the deadlock was finally broken just three minutes later when Hopkins split the defence open with a lovely through ball which Campbell duly dispatched into the back of Murphy’s net.

The goal spurred on ‘Marine with Spalding volleying over and Harry Williams forcing another good save out of Murphy, although Dorchester weren’t going down without a fight and they were unlucky to equalise when Gardner’s effort from distance landed on top of Horsell’s net.

Harry Williams should have closed the game out three minutes from time but he couldn’t divert substitute Stuart Fleetwood’s cross into the net from six yards out. Dorchester continued to push for an equaliser, but the ‘Marine backline held on for their second consecutive clean sheet and their second game where they weren’t overly troubled with the majority of chances being from distance.