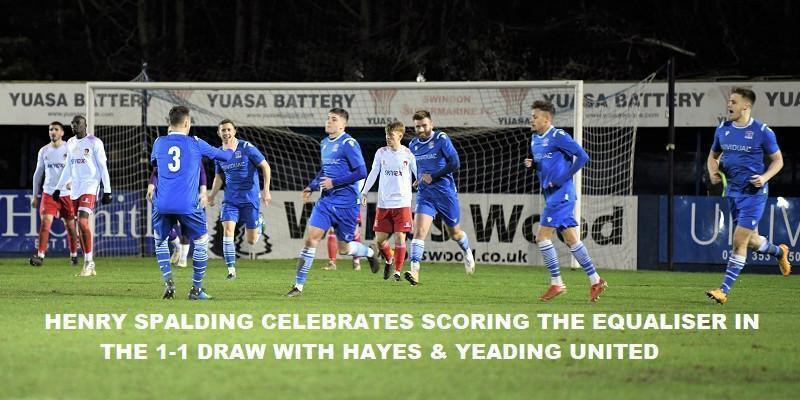 Form team Hayes and Yeading United were held to a 1-1 draw against Swindon Supermarine on Tuesday night at the Webbswood Stadium.

Lee Spalding welcomed the London club off the back of a satisfying one-goal weekend victory over Farnborough on the road.

But Hayes arrived full of confidence too following a string of successful results – which included wins against Gosport Borough, Yate Town and Blackfield & Langley since the turn of the month.

But another standout performance by goalkeeper Martin Horsell, coupled with Henry Spalding’s 47th minute equaliser, earned Marine a point to move them onto 57 points from 31 games. Hayes still occupy the final play-off spot with most teams now left with a dozen more games to play.

Hayes and Yeading couldn’t have started the game better after they took the lead with only three minutes on the clock. A lapse in defence just inside the Marine half allowed Francis Amartey the freedom to run at the goal and plant the ball in the far corner.

Both Henry Spalding and Conor McDonagh had chances to equalise, but missed the target and Marine ended the half a goal down.

Like their visitors in the first half, Marine made a jet-propelled start by scoring two minutes after the restart.

From a free kick 25-yards out the ball feel to Henry Spalding found himself in some space just inside the right side of the penalty box and slammed a left-footed effort into the top corner of the net for a deserved equaliser.

With a number of chances falling each side neither team could find a winning goal, though, as the match ended in a deservedly 1-1 draw.