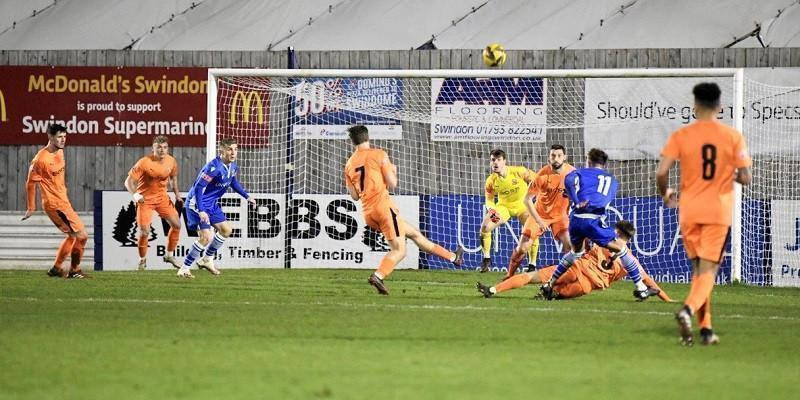 In a massive game for both sides as they look to secure their spot in the Premier Division for next season Marine took on M4 rivals Hartley Wintney at the Webbswood Stadium on Tuesday night. Manager Lee Spalding opted for two changes from the team that lost a week ago late on at Weston-super-Mare with Tom Mehew and Conor McDonagh coming in and George Dowling and Harry Williams dropping down to the bench. Michael Hopkins returned after injury to the bench with Matt Britton unavailable and Tyrone Duffus still on the side lines, although very close to a return and warming up ahead of the match. 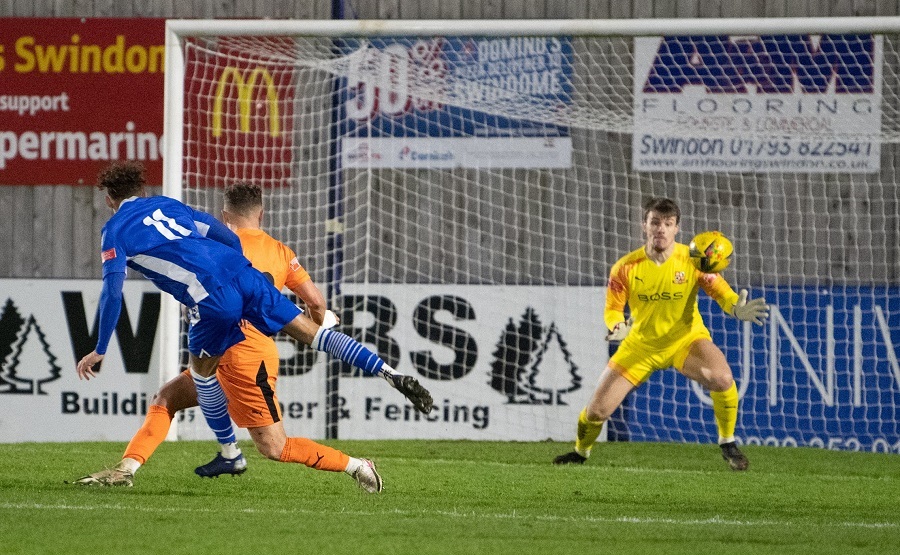 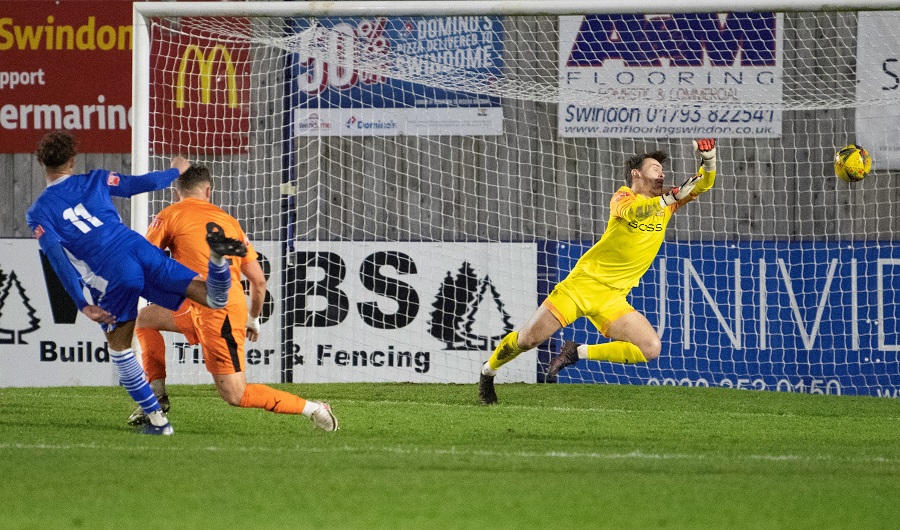 Both sides started cautiously before Marine found their feet with Conor McDonagh feeding in Henry Spalding on the left, but he slashed his shot wildly over. On ten minutes Marine had the ball in the net from Conor McDonagh but he had strayed offside with a penalty shout for handball waved away by the referee just before. Ryan Campbell was looking dangerous on the right-hand side beating his defender time after time and on sixteen minutes broke through but visiting keeper Luke Williams made an excellent stop. But there was no stopping the speedy winger on twenty minutes, when a move across the pitch involving Kieran Phillips, Henry Spalding and then Conor McDonagh who set RYAN CAMPBELL away and from the edge of the box and he turned inside his marker and lashed the ball home past the left hand of the keeper for his ninth goal of the season. 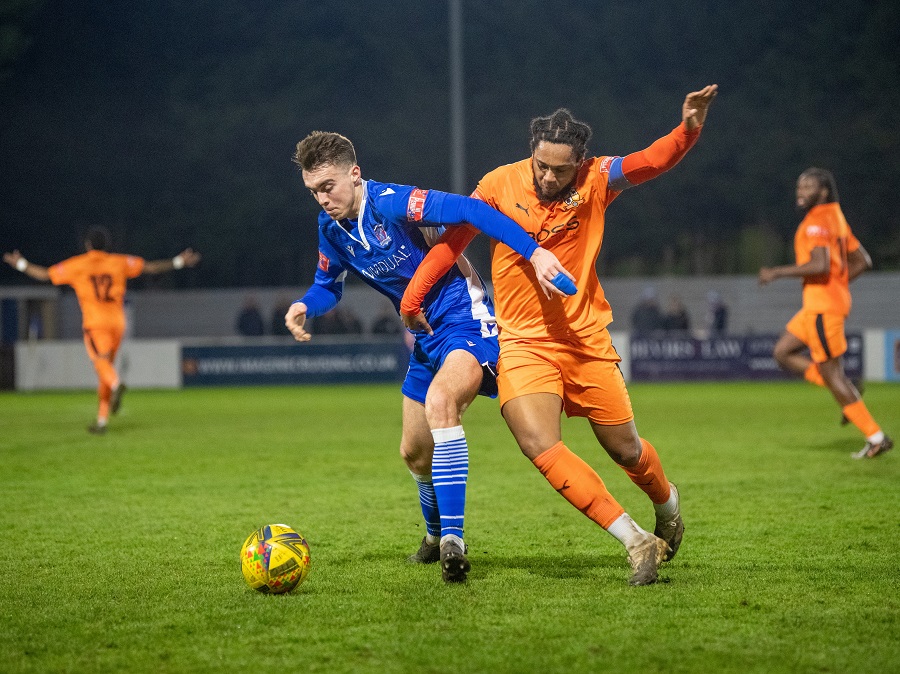 Kieran Phillips had a couple of chances in the space of two minutes just after the half hour mark, the first well saved and the second agonisingly wide of the upright when he really should have put it away as Marine were totally dominating proceedings at this moment. Further gild edged chances were spurned, firstly by Henry Spalding, who lashed a fierce drive wide and then by defender Tom Sharpe who was up for a corner, found himself unmarked at the back post but he sent a header off target. A solid if somewhat wasteful first half from Marine who really should have been further ahead at this stage. On the whistle one of the Hartley coaching staff objected to the first half official’s decisions and was prompted red carded for his outrage. 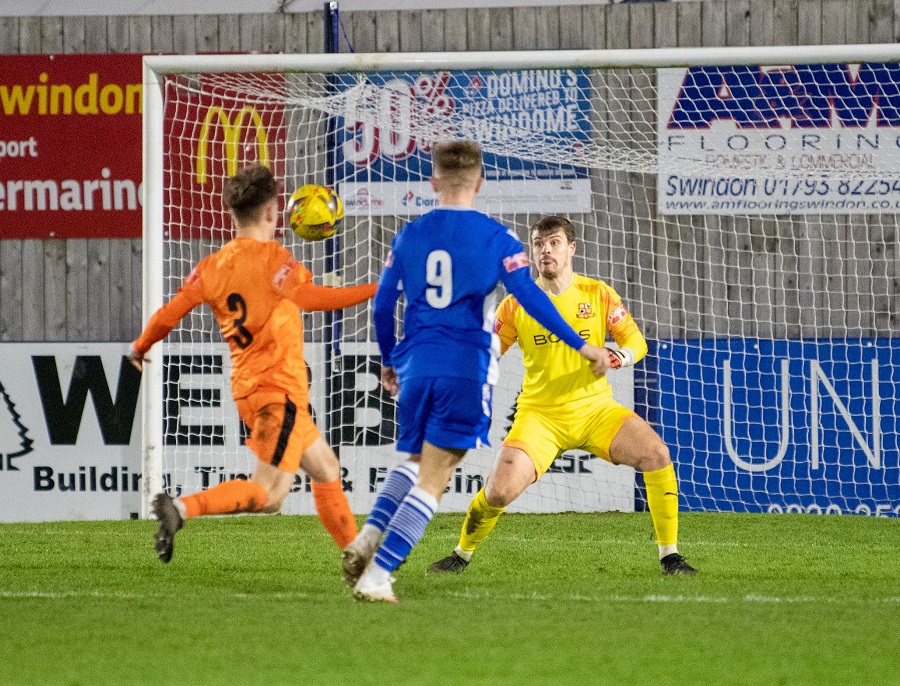 Harry Williams came on for Kieran Phillips at the break with the Bristol Rovers loanee suffering the aftereffects of a heavy cold. That first half lack of clinical finishing was to bite Marine on the restart as the visitors swept forward and full back Tom Leggett set up the unmarked HARRY COOKSLEY on the edge of the box and he angled the ball into the bottom corner left hand corner of the net giving home keeper Martin Horsell no chance. Out of nowhere it was suddenly 1-1 when the game should have been out of sight! 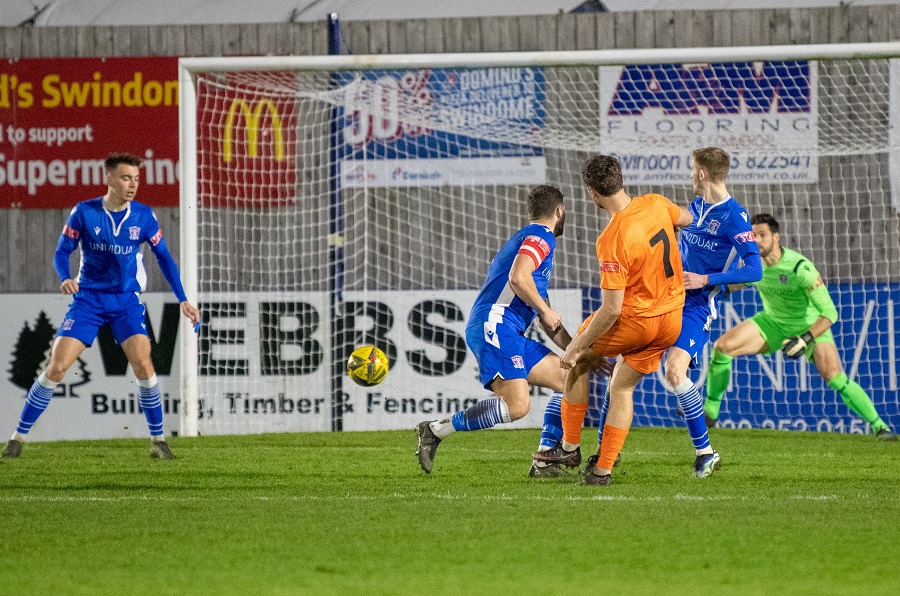 So, Marine had it all to do again and they responded superbly well. An instant response saw Harry Williams break away down the right wing and floated over a pin-point cross expertly glanced home by CONOR McDONAGH to give Marine a deserved lead again just a couple of minutes later. Tom Sharpe was booked for a on forty-nine minutes before Tom Mehew was replaced by George Dowling after fifty-three minutes and he nearly made an instant impact himself with a good shot blocked in front of the goal. 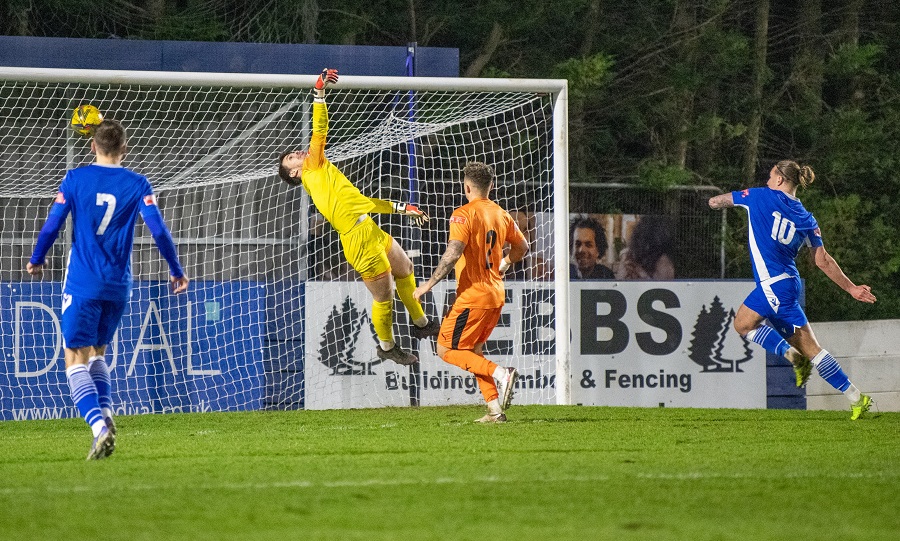 Hartley made a double change of their own just before the hour mark and this led to a spell of decent pressure from them with Jordan Edwards and Harry Cooksley forcing Martin Horsell to make his first good saves of the game. Zack Kotwica replaced Henry Spalding with twenty minutes left as the game drifted into a quieter spell. This marked danger however for Marine as with thirteen minutes to go Marine switched off and from a set piece the ball was bundled home at the back post by ADAM ALLEN after a Jordan Edwards effort was headed off the line. Out of nowhere the game was suddenly all square again at 2-2! 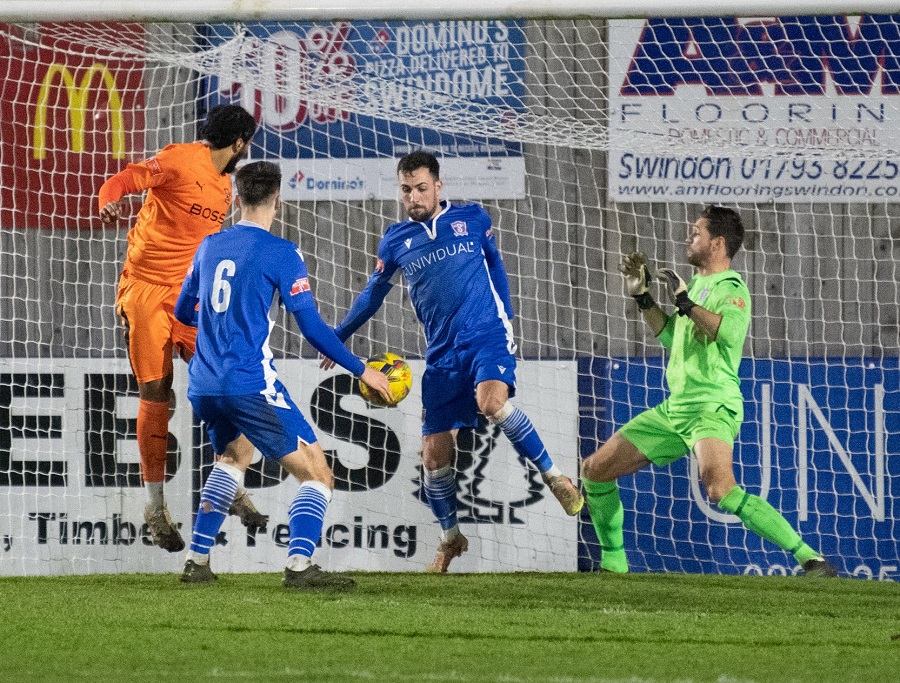 Once again however the hosts who seemed to be able to switch up a gear and broke clear with Harry Williams beating his man on the edge of the box only to be clearly brought down. But the referee indicated that the last defender had touched the ball from Williams’s foot and saw no offence and waved away the Marine appeals. The respite was short lived though and Williams was not to be denied. A sweeping move saw Zack Kotwica run at goal and with the Hartley defenders back pedalling he found Marine top scorer HARRY WILLIAMS just inside the box and he poked the ball home past the keeper for his fourteenth goal of the season giving Marine a 3-2 lead. Five added minutes were shown and both Harry Williams and Ryan Campbell were denied close in by the visiting keeper Luke Williams, before the referee blew the final whistle to end the match. 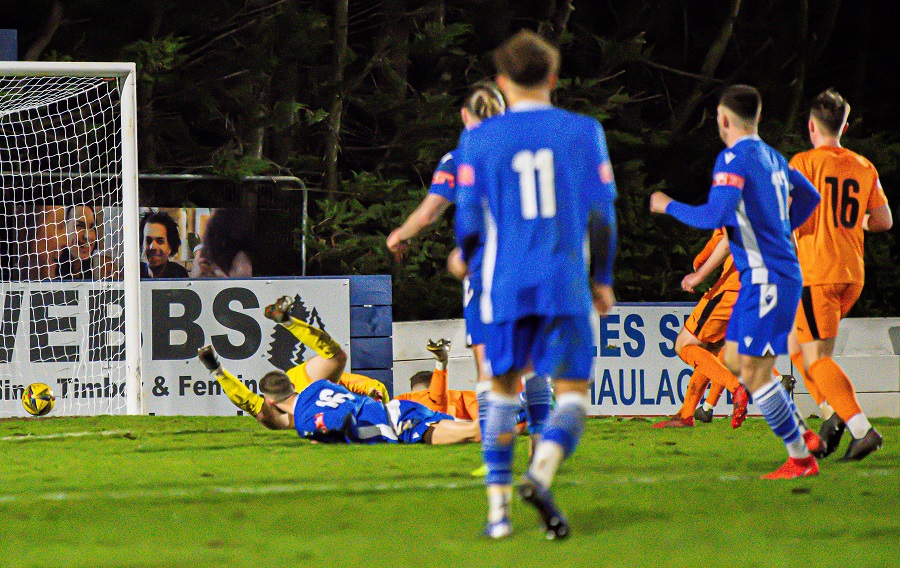 Marine deserving of their three points, perhaps making a meal of the victory but a good win none the less which will go a very long way to preserving a spot in midtable once more whilst keeping up a very strong home record. Next up on Saturday Beaconsfield come to the Webbswood Stadium on Saturday as Marine seek a response to the heavy defeat when they visited Beaconsfield earlier in the season. 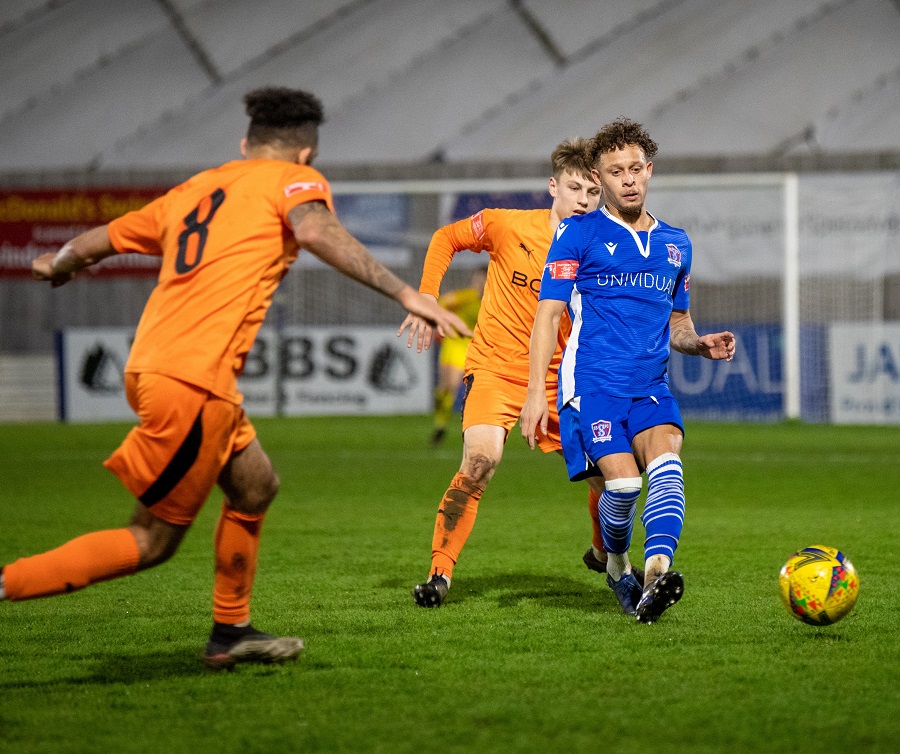 Fans player of the match: RYAN CAMPBELL, a good performance which set the tone for everyone else to follow.