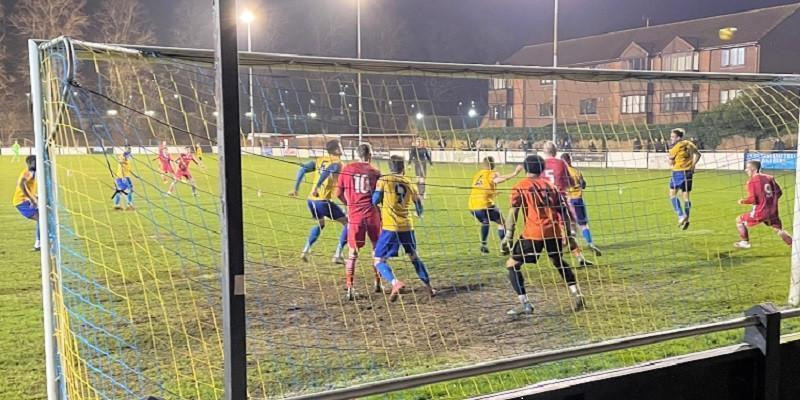 Marine travelled to Southern League Division One Central Side Berkhamsted on Tuesday Night in the Quarter Finals of the League Cup aiming to seal their second cup semi-final place of the season having made the Wiltshire Premier Shield semis last week. The Comrades of Berkhamsted sit high in their table having lost only twice all season so it was never going to be an easy night at their Broadway ground on a sticky pitch. Marine boss Lee Spalding made two changes from the league defeat at the weekend.

Jamie Edge came in at the back for Tyrone Duffus who has works commitments and arrived late and Kinsly Murray made his second start since joining replacing Ryan Campbell on the wing. Tom Sharpe, Pierce Mitchell and Frankie Artus were still injured.

Both sides looked to find their feet against each other early on but seemed up for the cup. It took thirteen minutes before the first effort on goal from the hosts easily held by Martin Horsell. Berkhamsted’s Reece Robins’ cross caused problems soon after but Horsell grabbed at the second attempt to quell the danger. Marine’s first shot at goal came from on midfielder Tom Mehew that went just wide. A cagey start but Mehew soon had another effort which went over the crossbar this time. The Comrades of Berkhamsted were forced into an early change on the half hour as Dan Akubuine had to go off with a strain and was replaced by Mohamded Bangura at full back.

Berkhamsted’s Lucas Kirkpatrick had an effort easily saved by Horsell before Henry Spalding had an effort blocked close in and was eventually cleared away. A quiet half ended with a speculative long range try from George Dowling that sailed over the bar and a free kick from Michael Hopkins that was easily gathered by Cameron Groom in the home goal as the sides went in all square at the break.

Marine came out all guns firing at the start of the second period. Henry Spalding superbly denied by the home keeper early on and it was Groom to the rescue minutes later denying Harry Williams close range header with Kieran Phillips putting the rebound wide. Lewis Hall had a long range effort on fifty-eight minutes but his shot went over the bar. With Marine now dominating, Berkhamsted made another change but the visitors continued to control the game with Tom Mehew forcing another save from Groom on the hour.

Frustration showed when Elliot Bailey went into the book for the hosts and with passions running high both Jamie Edge and Reece Robins also saw yellow after a fracas. Manager Lee Spalding decided to ramp up the pressure even more on sixty-seven minutes, introducing Brad Hooper and Ryan Campbell for George Dowling and Kinsly Murray. It was almost the perfect entrance for Hooper as his volleyed effort at pace went just wide of the home goal.

Ryan Campbell was the latest to be denied by the excellent home keeper Groom before a key save on the break at the other end when Reece Robins was thwarted by a Horsell save when through on goal, tipping his fierce effort over the bar. The last roll of the dice came when Zack Kotwica replaced Henry Spalding. A Harry Williams shot was deflected for a corner and from the set piece skipper Mat Liddiard met the ball at the far post but unfortunately headed over when the header on target would have surely opened the goal scoring? But with five minutes added time shown and with penalties looming Marine found the moment to seal their place in the next round.

After a bout of pressure around the box Ryan Campbell was smashed in the chest by a clearance on the edge of the penalty box that fell kindly to Zack Kotwica who played the ball back to Campbell before receiving the ball back and his delightful back heel put RYAN CAMPBELL through on goal and he made no mistake from six-yards as he side footed the ball past the Groom to score the late winner. It was a tough one to take for the home side but the win was probably just deserved by Marine when you consider that the home keeper Cameron Groom was without doubt the overall player of the match.

A semi final spot awaits – with Taunton Town, Royston Town and Rushall Olympic the other sides who made it through to the semi-fianls. Next up is League action at the Webbswood Stadium on Saturday as we take on Walton Casuals with a 3:00pm kick off.