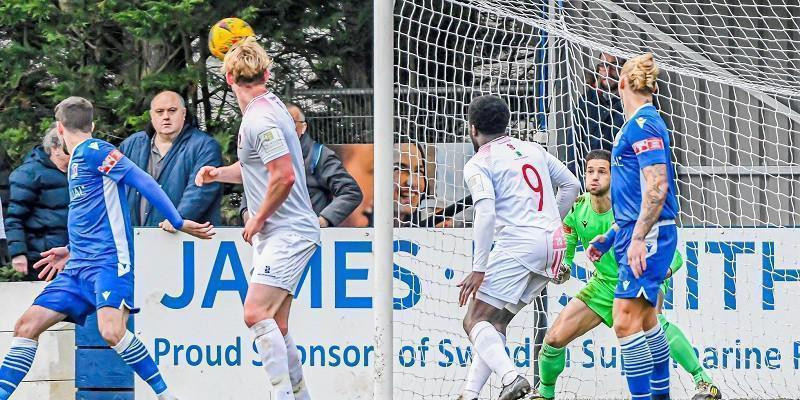 Marine entertained title chasing Hayes & Yeading United in their first home league game of 2022 at the Webbswood Stadium on Saturday afternoon. Tyrone Duffus returned after injury with Martin Horsell and Ryan Campbell were back in the side after being rested for the midweek cup match. Tom Mehew made his first league start of his loan spell from Bristol Rovers. Pierce Mitchell, Frankie Artus and Tom Sharpe missed out with injury. 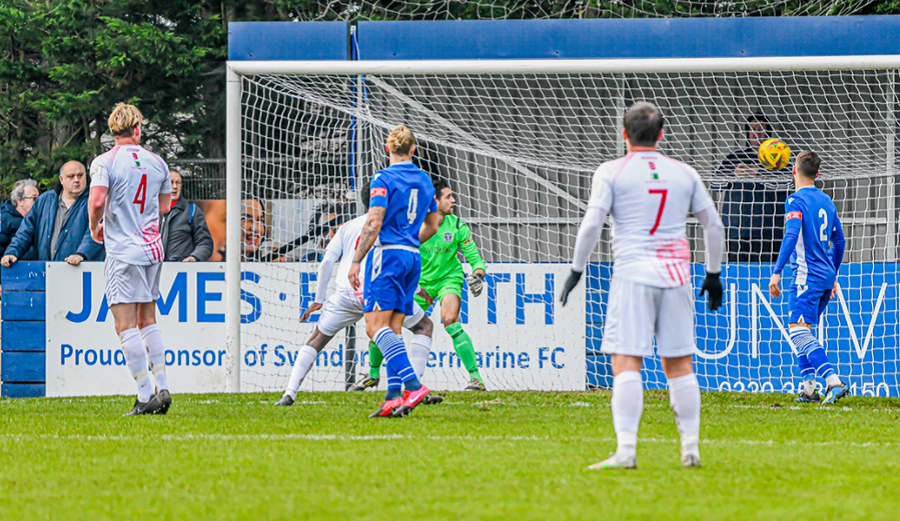 The first action of the game came quickly as Harry Williams appeared to be shoved over in the box but probably due to the fact it was so early in the game the referee waved it away. Hayes were pushing hard despite that and after a sixth minute corner HASSAN JALLOH was given a little too much time and was left unmarked on the edge of the box, he absolutely lashed home an unstoppable shot into the top corner from 22-yards and in doing so injured his knee in the process. He was replaced shortly afterwards by substitute Kadell Daniel. 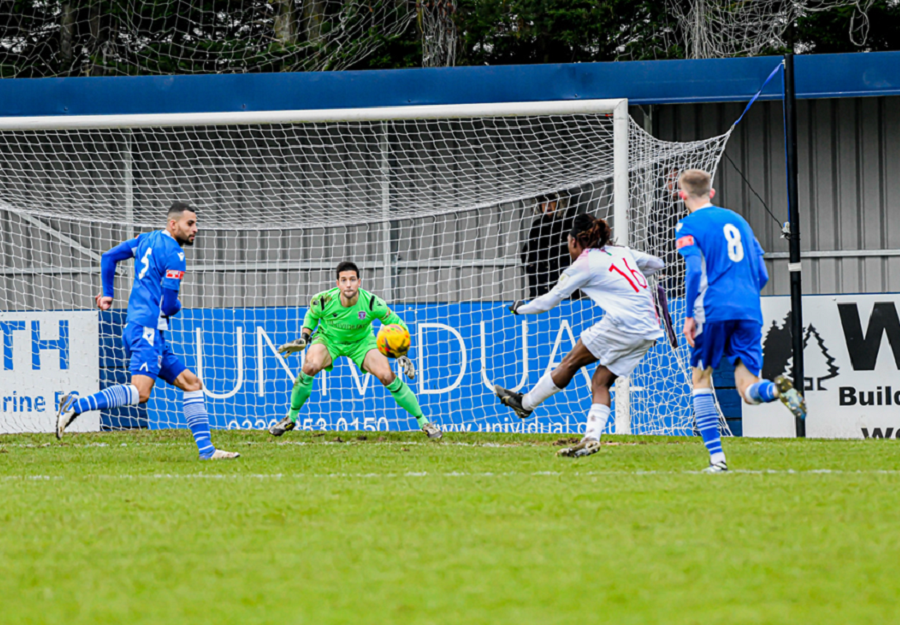 On 10 mins Hayes nearly made it two from another corner but the Marine defence combined to hack it off the line from defender Charlie Wassmer’s effort. Marine had their first go at goal from Henry Spalding comfortably held by the keeper but with 19 minutes on the clock it was 2-0 to the visitors. Substitute KADELL DANIEL showed some amazing technical skill to spin past Mat Liddiard with a Cruyff turn and then hit a curling left foot shot first time into the top corner of the net. One of the best goals seen at the Webbswood Stadium this season without doubt! 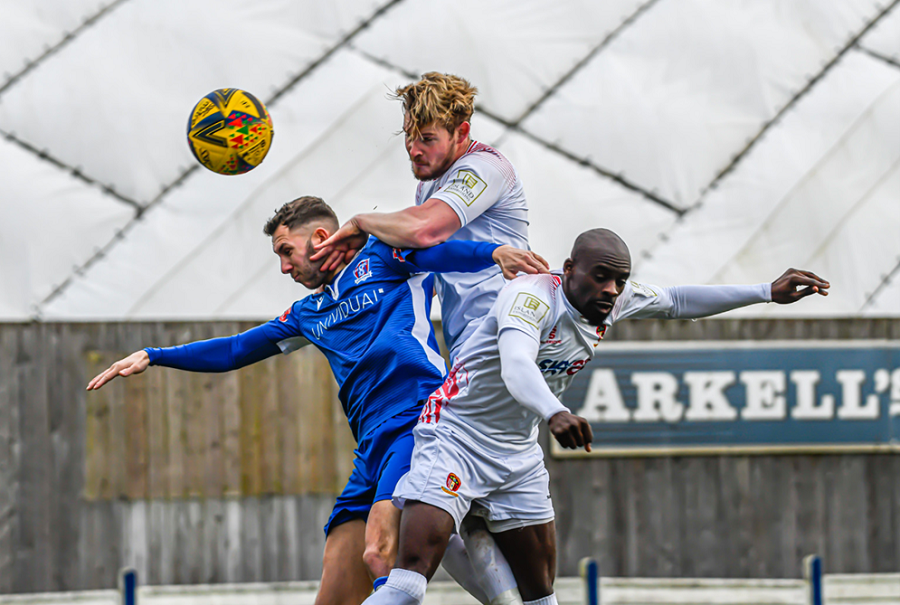 This seemed to turn the game however as Marine started to get a foothold in the match. Ryan Campbell was denied by Hayes keeper Ravan Constable in the visiting goal with a low shot and Harry Williams found his way into some space just after the half hour but dragged his shot wide. Lewis Hall was booked soon after for a foul after some blatant over-reaction from the player fouled in what served as a pre-cursor to the next and most important decision of the game. With Marine going into the break having steadied the ship and looking forward to improving in the second period George Dowling slid into a tackle on Moses Emmanuel. Despite appearing to win the ball cleanly the referee, George Enever, rather surprisingly awarded a free kick and after the visitors histrionics then proceeded to pull out one of the harshest red cards I have ever seen? 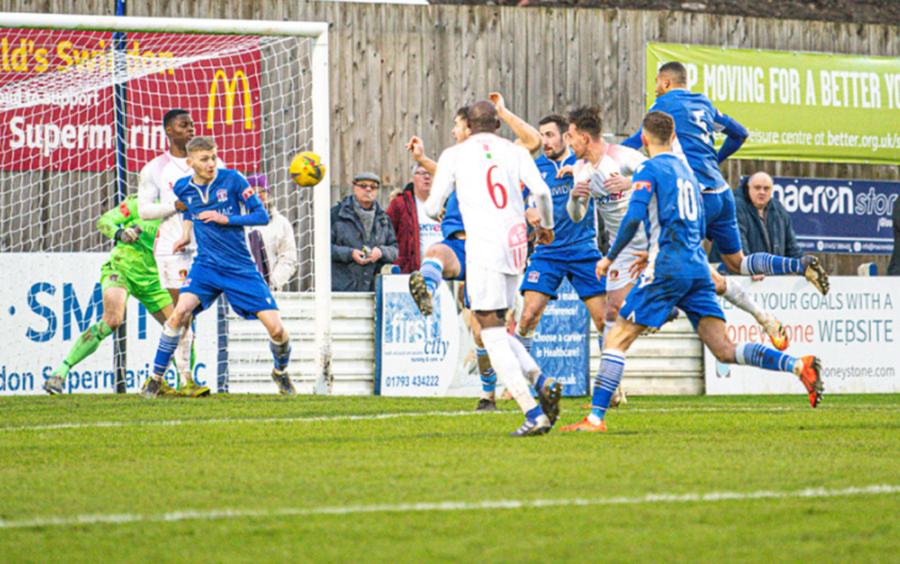 Sadly, this effectively killed the game as a spectacle against a side pushing for top spot in the league and made for quite a dour and dull second half as Marine battled against the elements. An early goal sealed the points for Hayes and Liam McDevitt’s header was saved by Martin Horsell only to fall to nicely for FRANCIS AMARTEY to follow up and nod the ball over the line from a yard out to make it 3-0 on 52 minutes. 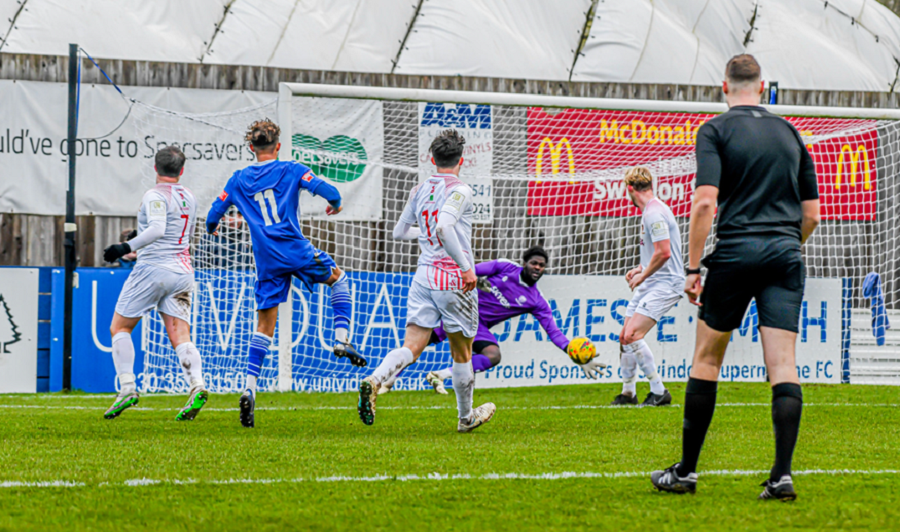 Jamie Edge came on for Kieran Phillips after the third Hayes goal and six minutes later Brad Hooper replaced Ryan Campbell as the hosts altered their tactical shape to try and halt the flow of attacks and for the most part it worked. Harry Williams fired an effort wide on the hour but Michael Hopkins cleared one off the line before a fourth Hayes goal was added by MOSES EMMANUEL heading home unmarked another corner on sixty-nine minutes. 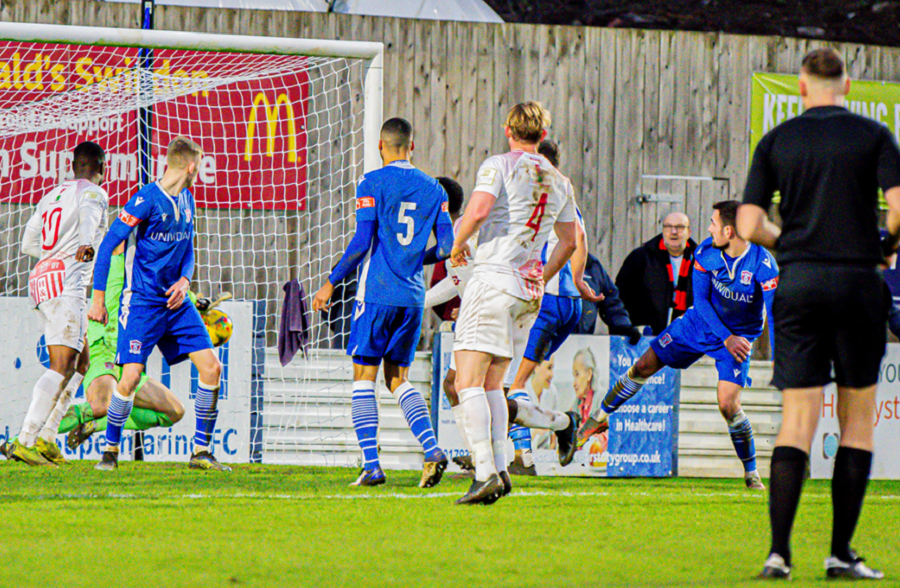 There was little much else to report for the remainder of the game as Marine comfortable stopped any further damage but were unable to really mount any telling counter attacks of their own due to the lack of players and tiredness resulting from the dismissal. A disappointing afternoon ruined by over-zealous officiating through much of the match heavily influence by the visitors demands for decisions. Not one that will live in the memory for long. It has been a tough run of fixtures for Marine facing all three top sides in three games and they will now look to try and get back on track with midweek and important Southern League Cup Quarter Final at Berkhamsted on Tuesday night, a competition that Marine must take seriously as it offers some hope of success for the season.