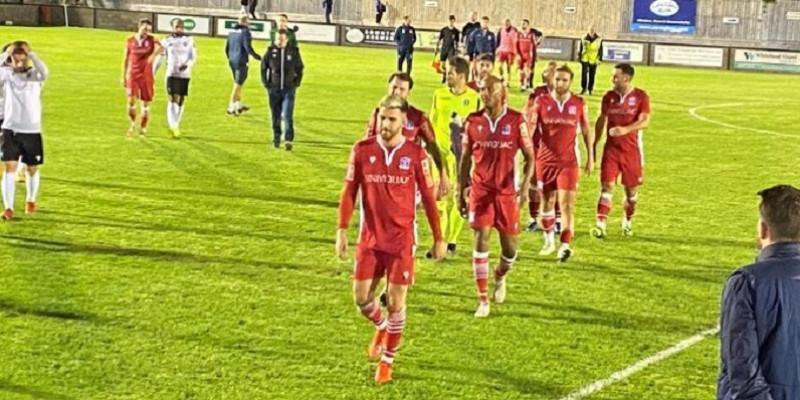 Swindon Supermarine took on local rivals Salisbury at the Raymond McEnhill stadium for their second meeting in a couple of weeks, this time in the Southern League Challenge Cup First Round. Manager Lee Spalding rang the changes as expected with a return to the starting line up for veteran Matt Coupe, Tyrone Duffus back after a month out injured and the front line altered to fit in David Pratt, Chris Zebroski and Zack Kotwica with Harry Williams dropping to the bench.

In another boost also back after injury from the bench after missing a few weeks were Pierce Mitchell and George Dowling. Missing the match were loanee Dan Ball through illness, Frankie Artus injury, and Ryan Campbell, Henry Spalding and Pablo Haysham were rested.

The first half started quietly with lots of hustle and bustle but little else for the first twenty or so minutes. Zack Kotwica got the first effort on target after twenty-two minutes before Tyrone Duffus saw a yellow for a foul on the edge of the box and then David Pratt was then also harshly carded for a challenge on the half hour when he seemed to slip.

Suddenly the game exploded into life after Marine gained a number of corners. On thirty-two minutes Jamie Edge’s in-swinging corner was met by the Salisbury defender SAM ROBERTS ahead of Mat Liddiard but he could only thump the ball past keeper Pat O’Flaherty and into his own net. Liddiard and then Chris Zebroski went into the book as the referee seemed to be booking every challenge made by a visiting player, but not the home side? Chris Zebroski went down in the box just before half time but nothing was given when a similar foul outside the box by a Marine player was not only punished with a free kick but also a yellow card? After another series of corners for Marine the second goal came on forty-three minutes from another set piece. TYRONE DUFFUS was credited with bundling the ball just over the line although Zebroski followed the ball in to make sure the goal was given!

An excellent end to a half for Marine whose pressure at set-pieces had paid off. Marine continued where they left off in the second half by building up a series of corners to put the hosts under pressure once more. On fifty minutes Brad Hooper blasted over when the ball dropped to him at the far post. Lewis Hall’s cross into the box almost turned into a goal but Salisbury keeper O’Flaherty managed to push the ball over for another corner. Jamie Edge took it and once again it nearly flew in under the bar only to put over by the keeper. Finally the pressure told and CHRIS ZEBROSKI came in at the back post to powerfully head home and make it a resounding 3-0 to Marine, with all three goals coming from our corners with sublime delivery into dangerous areas for the Salisbury defence.

Matt Coupe became the fifth player into the book with a harshly awarded free kick before on the hour before a triple change in a few minutes saw Conor McDonagh, Pierce Mitchell and George Dowling enter the fray in place of David Pratt, Mat Liddiard and Jamie Edge. Michael Hopkins was next into the book for a timid foul on the edge of the box. From the resulting free kick the ball was headed back across goal for Salisbury skipper DARREN MULINGS to head home from close in.

With nineteen minutes left Tyrone Duffus was adjudged to have fouled Tom Blair off the ball but it simply looked a coming together initiated by Blair but the referee thought different and decided it was worthy of another yellow and in Duffus’ case a second yellow followed by the red. What was being displayed by the match official was simply bizarre to say the least, as the Marine players were shown a card for the slightest of tackles, but funnily enough not a Salisbury player was booked up to now, but they were also committing their share of the fouls?

Marine were now up against it and the hosts started to chance their arm with long range efforts. Martin Horsell was down well to gather a shot from Salisbury substitute Sam Ashton soon after we went down to ten men. The Salisbury shots continued to rain in and on eighty-one minutes Horsell did well to save again but the rebound before the ball was thumped wide when really it should have been put home from in front of the goal.

Martin Horsell again came to the rescue with five minutes to go with a superb save, but some simulation on the rebound and a penalty appeal was waved away by the match official – although no yellow for the hosts on this occasion for simulation? There were five extra minutes put up on the board but Marine had no trouble negotiating the final period, although Zack Kotwica was shown a yellow card too despite the player who was fouled and man handled from the floor, our eighth yellow card of the game? A battling display against the odds at times and Marine will be glad that October has got off to a better and winning start after a stuttering period during September. Next up a chance to gain more revenge as they take on FA Cup conquerors Poole Town at home on Saturday.